“You are forever respectfully ingrained in our history”

The Academy apologizes to Sacheen Littlefeather months before her death

The Academy of Motion Picture Arts and Sciences officially apologized in June to Native American activist and actress Sacheen Littlefeather, who died on Sunday,  for the mistreatment she received during her appearance at the 1973 Oscars ceremony.  Littlefeather was booed while on stage as she announced Marlon Brando’s unwillingness to accept the best actor award for his performance in The Godfather because of Hollywood’s poor treatment of Native Americans in film.

Then–Academy President David Rubin wrote the letter nearly 50 years after the fact, saying, “You made a powerful statement that continues to remind us of the necessity of respect and the importance of human dignity. … For too long the courage you showed has been unacknowledged. For this, we offer both our deepest apologies and our sincere admiration.”

Littlefeather, shocked by the Academy’s penitent gesture, admitted, “I never thought I’d live to see the day I would be hearing this.”

Brando sent Littlefeather, a close friend and then-president of the National Native American Affirmative Image Committee, in his stead as a form of activism against Hollywood’s persistent disrespectful portrayals of Native Americans in television and on film. Littlefeather’s neighbor, director Francis Ford Coppola, introduced the pair in 1972.

“We were in a collaboration at that time,”  Littlefeather said in a recent interview, “because [Brando] was very aware of the stereotype of Native American Indians in film, television, and the sports industry.” The pair also hoped to call attention to the government’s actions the previous month against Native Americans during the Wounded Knee Occupation—“The Second Wounded Knee”—which received little to no media attention.

Littlefeather recently revealed that Brando called her the night before the ceremony asking her to appear on his behalf. Once she agreed, he gave her a nine-page speech, and she arrived at the event only 15 minutes before the best actor announcement. Littlefeather credited her appearance that night for ending her career in Hollywood. “I went up there thinking I could make a difference,” she said. “I was very naive. I told people about oppression. They said, ‘You’re ruining our evening.’” 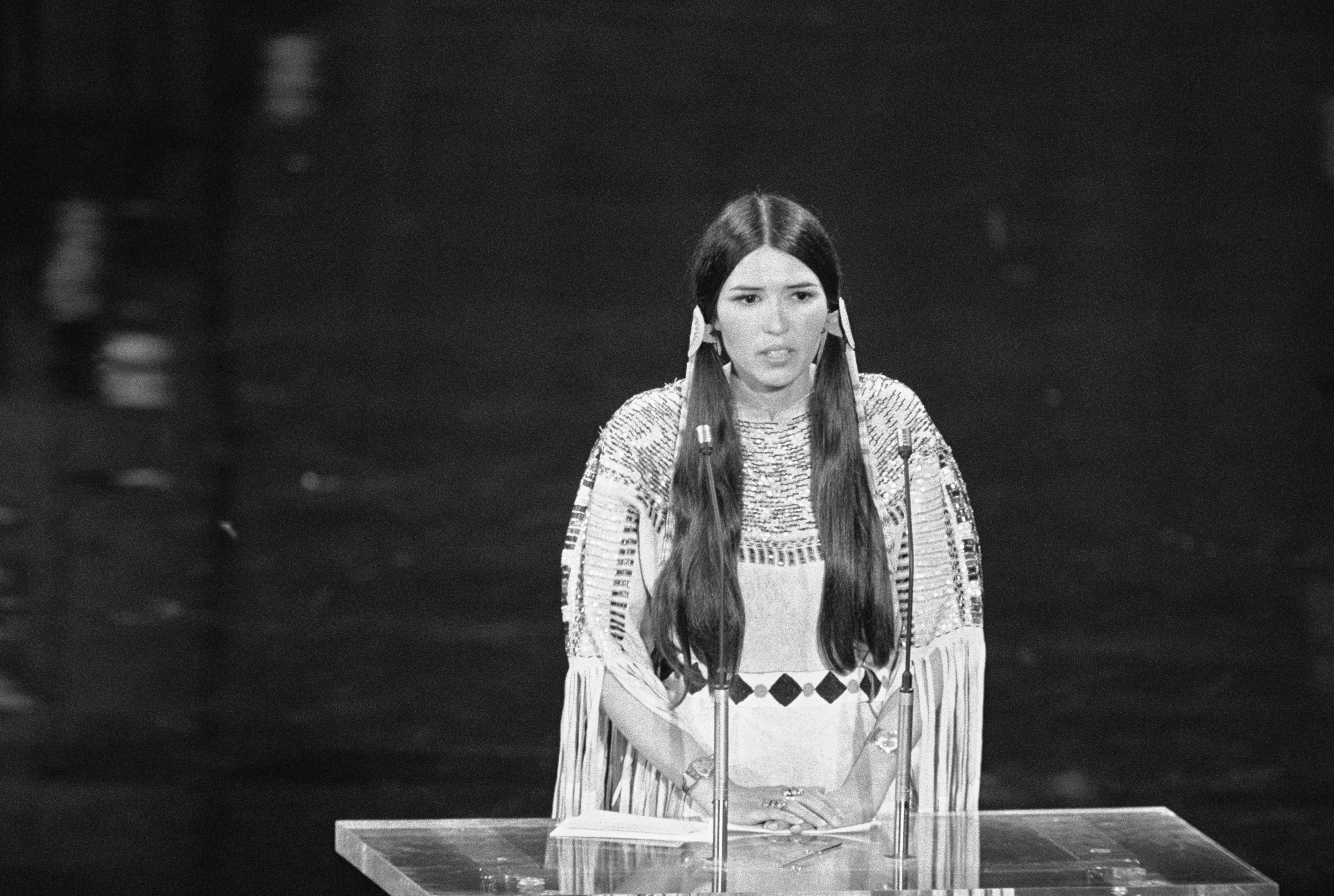 Sacheen Littlefeather at the 45th Academy Awards in 1973 Getty Images

Littlefeather claimed the FBI played a role in her exile from show business because she specifically mentioned Wounded Knee, telling Variety that agents “went around Hollywood and told people not to hire me. If they did, they would shut their film production down.”

Rubin acknowledged in his letter to Littlefeather the damage her career sustained because of her activism that night: “The emotional burden you have lived through and the cost to your own career in our industry are irreparable. … We hope you receive this letter in the spirit of reconciliation and as recognition of your essential role in our journey as an organization. You are forever respectfully engrained in our history.”

The 1973 incident regained public attention as many reminisced on previous Oscar fiascos in the wake of Will Smith’s assault on Chris Rock during this year’s Oscars. Some question the timeliness of the Academy’s apology to Littlefeather—it had remained silent for 49 years, only choosing to apologize a mere three months after someone physically attacked an Oscar attendee on stage.

In September, The Academy Museum of Motion Pictures held a ceremony honoring Littlefeather in which she formally accepted the Academy’s apology. “I am accepting this apology not only for me alone … but all of our [Native American] nation,” she said. “Our nation needs to hear this apology.”

Littlefeather described the apology as “a big cleanse,” adding, “It feels like the sacred circle is completing itself before I go in this life.”

Christina Grube is a graduate of the World Journalism Institute student course.