Will Trump retighten restrictions on Sudan?

A Wednesday deadline is pushing the Trump administration to decide whether to keep loosened Sudan sanctions or snap them back into place.

The choice comes after the Obama administration surprisingly lifted some sanctions against Sudan in January—even as President Omar al-Bashir remains indicted on war crimes. The Obama Treasury Department cited Sudan’s “sustained progress” on “several fronts” as the reason for allowing persons and entities in Sudan and the United States to conduct business.

“Treasury’s sanctions are aimed at encouraging a change in behavior, and in the case of Sudan, our sanctions were intended to pressure the government of Sudan to change the way it treats its people,” Treasury’s Adam Szubin said in January.

If Sudan did not sustain “positive actions it has taken over the last six months,” President Barack Obama’s executive order provided for revocation of sanctions relief by July 12.

The United States first levied sanctions against Sudan in 1997, after the country gave sanctuary to Osama bin-Laden—one of numerous ways it provided material support to terrorism. The State Department has listed Sudan as a state-sponsor of terrorism since 1993—a designation held by only two other countries, Iran and Syria.

In 2003, al-Bashir began carrying out what became known as the first genocide of the 20th century, leading the George W. Bush administration to tighten sanctions and the International Criminal Court to charge al-Bashir with crimes against humanity.

The State Department and the U.S. Commission on International Religious Freedom still list Sudan as a “country of particular concern.” Human rights groups say they have documented evidence of mass rapes and chemical weapons use in the last two years.

“That’s fundamentally immoral,” former U.S. Rep. Frank Wolf told me, calling it blood money. “The very fact that one of the major law firms in this city would represent a genocidal government … makes me sick.”

Last week, a bipartisan group of House lawmakers asked President Donald Trump to delay making a decision for one year, or until the White House is able to fully staff the National Security Council and the State Department. At a minimum, the evidence needed to lift sanctions is inconclusive, they said.

“The Sudan government has one of the worst human rights records in the world,” lawmakers wrote. “Should the U.S. allow sanctions relief to become permanent in July, we are deeply concerned that Sudan will continue to expand its financial and logistical support to illegal armed groups on the African continent.” 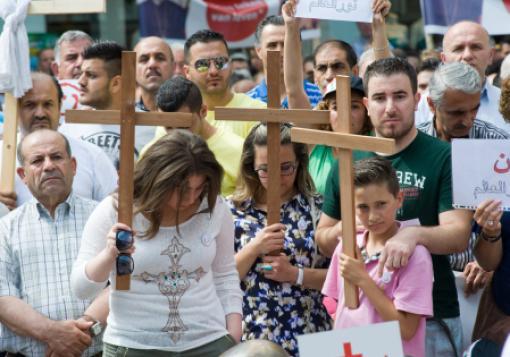 People rally in The Netherlands in support of persecuted Christians in the Middle East. ©iStockPhoto.com/RobertHoetink

International religious freedom advocates are lobbying the State Department to release it soon.

“There are letters going into the administration asking them to release it. … I think it’s finished,” said Wolf, now a distinguished fellow at the 21st Century Wilberforce Initiative. “The fact that it’s not been released is … I mean, it’s shocking. I still don’t understand it.”

Wolf and other advocates think the delay is related to the lack of an ambassador-at-large for international religious freedom—which they believe will be Kansas Gov. Sam Brownback. Since Congress is only in session for three weeks before the August recess, it looks increasingly likely the ambassador position won’t be filled until at least the fall.

Faith McDonnell with the Institute on Religion and Democracy said Brownback would be an answer to prayer.

“I love Gov. Brownback immensely and I think he would be wonderful,” McDonnell said. “I think that we need to keep encouraging the administration to put a priority on human rights and religious freedom issues.” —J.C.D. 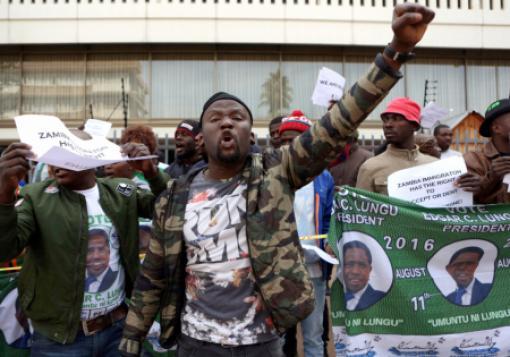 People rally in The Netherlands in support of persecuted Christians in the Middle East. ©iStockPhoto.com/RobertHoetink

Zambian President Edgar Lungu has invoked a declaration similar to a state of emergency after a spate of arson attacks in the country. Several staged fire outbreaks have targeted courts and markets, and police officials said they anticipate more attacks. Lungu invoked a “declaration relating to threatened emergency,” which gives the president power to impose curfews, ban public meetings, and search properties without warrants. Opposition leader Geoffrey Mwamba said the country has penal codes and laws to deal with the arsons and argued the declaration could stifle rights in the country’s already struggling democracy. The parliament in June suspended 48 opposition lawmakers for 30 days because they missed a presidential speech. Opposition leader Hakainde Hichilema, who lost to Lungu in a disputed election last year, remains in custody on treason charges. —Onize Ohikere

Eight men charged with intentional homicide will on Tuesday appear before a judge in Greece after they allegedly beat to death a tourist from Texas. The eight men include six Serbs, one Greek, and a British national. Bakari Henderson, 22, on Friday suffered multiple blows outside a bar on the western Greek island of Zakynthos and eventually died in a hospital. It’s still unclear what started the altercation. Henderson graduated in May from the University of Arizona. His family said in a statement Henderson was in Greece to work on a photo shoot ahead of launching his own clothing line. —O.O.

Queens Central Hospital in Blantyre, Malawi, on Tuesday officially opened a new pediatric unit sponsored by American pop star Madonna. The Mercy James Institute for Pediatric Surgery and Intensive care is the first of its kind in the country. The institute will allow the hospital to double the number of children’s surgeries and provide patients pre-operative and post-operative care. Madonna’s Raising Malawi nonprofit funded the institute in collaboration with Malawi’s Ministry of Health. She named the institute after her daughter, adopted from Malawi in 2009. Madonna has three other adopted children from the country. —O.O.

The Roman Catholic Church in Mexico has confirmed Rev. Luis Lopez Villa, a priest in the Diocese of Nezahualcoyoti, was stabbed and killed in the town of La Paz earlier this month. Assailants broke into the parish house at night on July 5, tied up Villa, and stabbed him to death. The 71-year-old is the third priest murdered this year in Mexico. Two other priests in Tijuana and Mexico City survived stabbings this year. Mexican authorities have recorded about 9,916 murders across the country in the first five months of this year—a 30 percent increase from the same time last year. —O.O.