WASHINGTON—The impeachment inquiry into President Donald Trump has focused on whether the president pressured Ukraine to investigate the family of his political rival, former Vice President Joe Biden. But the impeachment fury has overshadowed a logical follow-up question: Did the Bidens do something that merits investigating?

That question looms over Biden’s 2020 presidential bid, especially as his fellow Democratic candidates emphasize their foreign policy credentials in light of U.S. tensions with Iran. While serving in the Obama administration, Biden took over the White House’s Ukraine policy and spearheaded an anti-corruption effort. He visited the country five times and said its leaders faced two pressing issues: “Russian aggression and endemic corruption.”

In a speech to the Ukrainian parliament in December 2015, Biden told lawmakers, “It’s not enough to set up a new anti-corruption bureau and establish a special prosecutor fighting corruption. The Office of the General Prosecutor desperately needs reform.” At the time, Biden’s son Hunter was serving on the board of a Ukrainian business accused of corruption.

Despite having no background in Ukrainian affairs, Hunter Biden joined the board of the country’s largest natural gas company, Burisma Holdings, in 2014. According to The Wall Street Journal, Burisma paid him $50,000 a month. The company likely extended the invitation to Biden, as well as other U.S. and European political and business figures, in an attempt to whitewash its image in the face of investigations into corruption, money laundering, and whether it had obtained some drilling licenses unlawfully.

Given the identity of the company’s founder and owner, such allegations were hardly surprising: Mykola Zlochevsky, a multimillionaire, served as natural resources minister during the tenure of Ukraine’s corrupt, pro-Russian government before the 2014 revolution toppled it. He had an obvious conflict of interest, having founded Burisma in 2002. In those days, he camouflaged his stake in the business through an offshore company in Cyprus.

Ukraine’s prosecutor general began looking into Zlochevsky in 2012. In 2014, the U.K. Serious Fraud Office froze about $23 million in funds linked to Zlochevsky. That same year, he ended up fleeing Ukraine over allegations of enriching himself while in office. In January 2015, however, the Central Criminal Court in London oversaw the release of the frozen funds, citing a lack of evidence to continue withholding them. In June 2018, the Serious Fraud Office closed the case. Ukrainian officials have made attempts to investigate Zlochevsky further, but his whereabouts are currently unknown.

The case against Zlochevsky in the U.K. court fell apart because while one Ukrainian prosecutor sent a dossier of evidence against Zlochevsky, another wrote a letter contesting whether he was accused of any crime at all. Zlochevsky’s case is only one example of the internal issues that have plagued Ukraine since it began taking steps toward a pro-democracy, pro-Western government.

Trump and other critics of Biden have highlighted the fact that father and son appear to have operated on opposite sides of the corruption battle in Ukraine. Trump’s personal attorney, Rudy Giuliani, has accused the elder Biden of shielding Burisma from investigation to benefit his son. The whistleblower report that sparked the impeachment investigation made the same claim.

Biden called on Ukraine to oust its leading prosecutor, Viktor Shokin, and threatened to withhold around $1 billion in loan guarantees if the country failed to do so. Shokin was also looking into Burisma, but observers have said the investigation had all but closed by the time Biden called for Shokin’s ouster. Shokin was widely seen as weak on corruption and even obstructed some legitimate investigations, said Geoffrey Pyatt, the U.S. ambassador to Ukraine from 2013 to 2016. During Shokin’s tenure, two of his associates were found to have stashed diamonds, cash, and other valuables in their homes, suggesting they had been taking bribes.

Shokin resigned in March 2016 under pressure from Ukrainian citizens, lawmakers, the United States, and other countries. In the short term, it seemed Biden might have actually harmed Burisma by opening the door to a new prosecutor who might take the investigations more seriously.

But by the time Biden left office, Burisma had escaped unscathed. The next Ukranian prosecutor would follow in Shokin’s laissez-faire footsteps when it came to investigating the company. Meanwhile, Biden’s son remained on Burisma Holding’s board until April 2019.

In an October 2019 interview with ABC News, Hunter Biden admitted accepting a seat on Burisma’s board was “a mistake, in retrospect.”

His father, too, has acknowledged, “The appearance looked bad. And [Hunter] acknowledged it. And that’s it. That’s all I’m going to talk about.”

“It’s just a fact that Hunter Biden would not have been on the board for Burisma, not have had this investment in the company had he not been Joe Biden’s son,” he said. “That will be an issue. … [Joe] Biden has not answered these questions satisfactorily; he’s going to have to find a way to do that.” 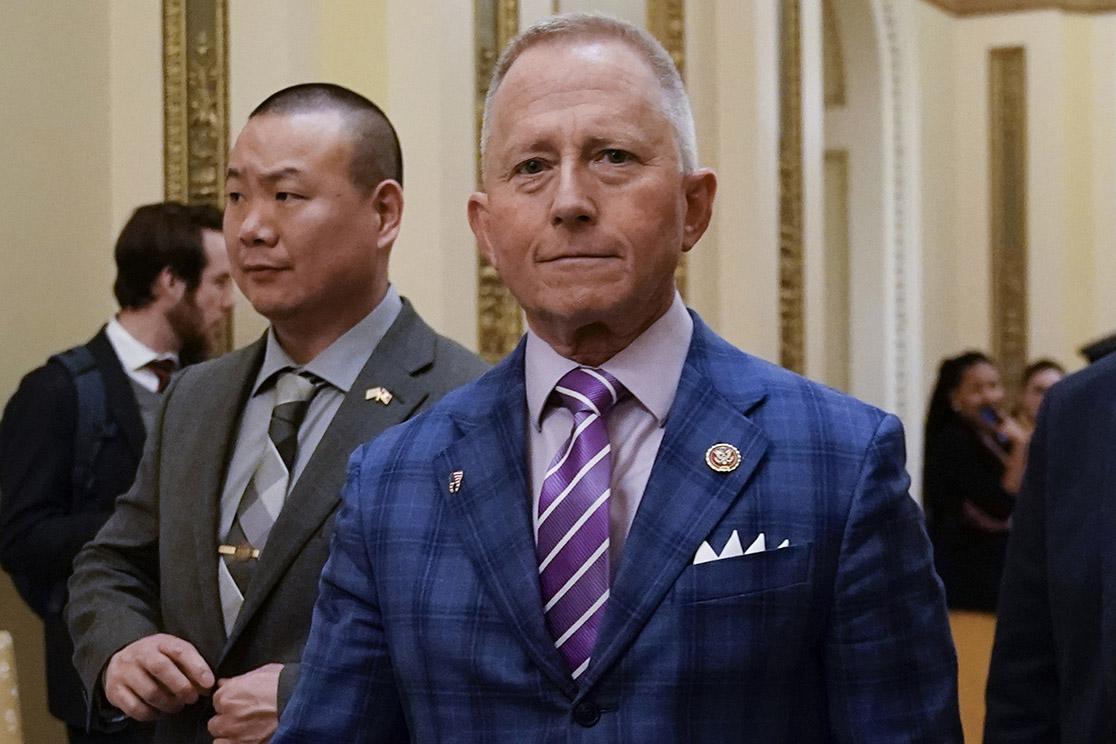 On Tuesday, freshman U.S. Rep. Jeff Van Drew, R-N.J., became the latest lawmaker to sign on to legislation protecting babies who survive attempted abortions. Until last month, Van Drew was a member of the Democratic Party and had never co-sponsored nor voted for any pro-life bills. But after voting last month against impeaching President Donald Trump, he announced he would switch parties and become a Republican.

The bill, called the Born-Alive Abortion Survivors Protection Act, would require doctors to give babies who survive abortions the same level of medical care as they would any other infant of the same gestational age. Current law says a baby who survives an abortion is a person, but it does not impose penalties on abortionists who fail to treat abortion survivors. This law would require abortionists to see that newborns are transported to a hospital for medical care.

House Speaker Nancy Pelosi, D-Calif., has refused to allow a vote on the bill 80 times. In response, House Republicans have sought to circumvent House Democrats by garnering enough support for a discharge petition, which Van Drew signed this week. The petition allows any member of Congress to bring legislation for a floor vote if they get enough signatures.

With Van Drew’s signature, supporters have brought the number up to 204 of the 218 needed. When Rep. Duncan Hunter, R-Calif., steps down on Jan. 13, the House will be made up of 232 Democrats, 197 Republicans, and one independent. Five seats, including Hunter’s, will be vacant. —H.P. 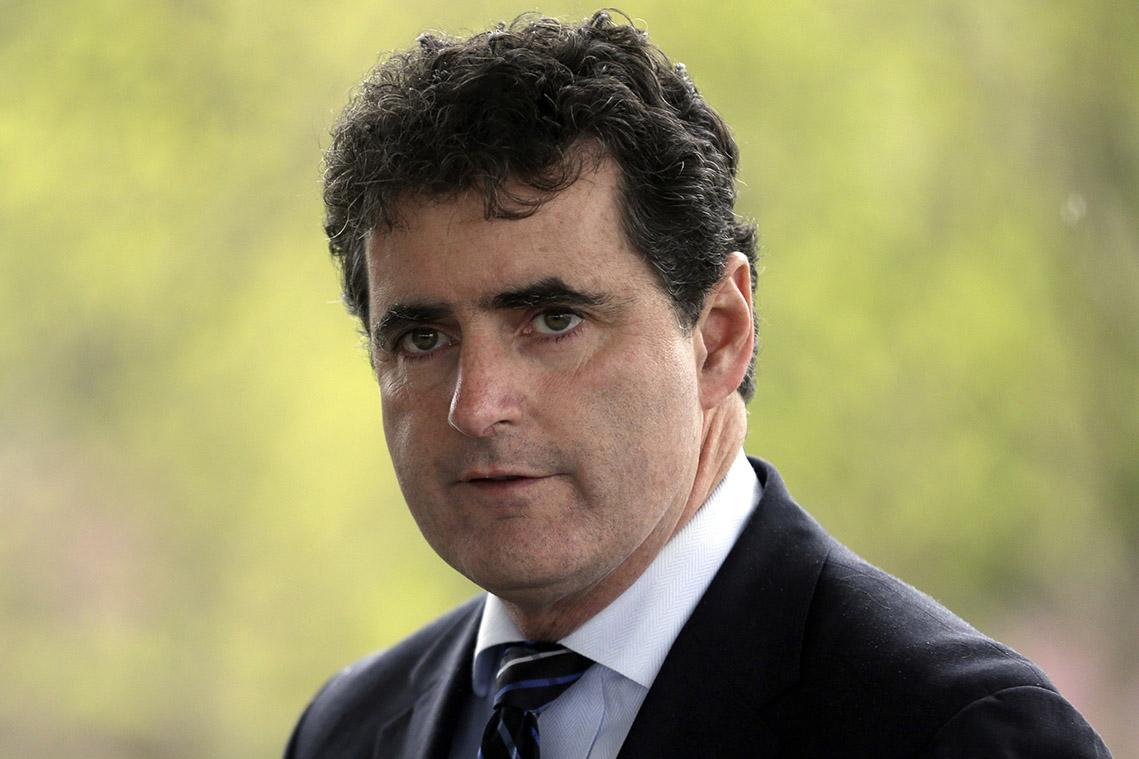 Former U.S. Rep. Mike Fitzpatrick, R-Pa., brother of current Rep. Brian Fitzpatrick, R. Pa., died Monday after a long battle with melanoma. He was 56. He previously was diagnosed with colon cancer in 2008.

Fitzpatrick served as a county commissioner in Bucks County, Pa., for nearly a decade before being elected to the U.S. House of Representatives in 2004. He lost his seat to Democrat Patrick Murphy in 2006 over backlash to the Iraq War. In 2010, he recaptured the seat amid the rise of the tea party due to dissatisfaction with Obamacare.

In 2016, he announced his retirement, sticking to term limits he had proposed in a constitutional amendment. Fitzpatrick, who according to the Lugar Center had one of the most bipartisan voting records, also pushed to end congressional pensions, freeze lawmakers’ pay, and increase the length of time that lawmakers are banned from lobbying after they leave Congress.

“My big brother Mike was my hero and my best friend,” Brian Fitzpatrick tweeted. “His 12-year courageous battle with cancer has taught our entire family his values of perseverance in the face of overwhelming odds.” His wife, Kathleen, and his six children survive him. —H.P.

Editor’s note: WORLD has updated this article to correct Mike Fitzpatrick’s cause of death. 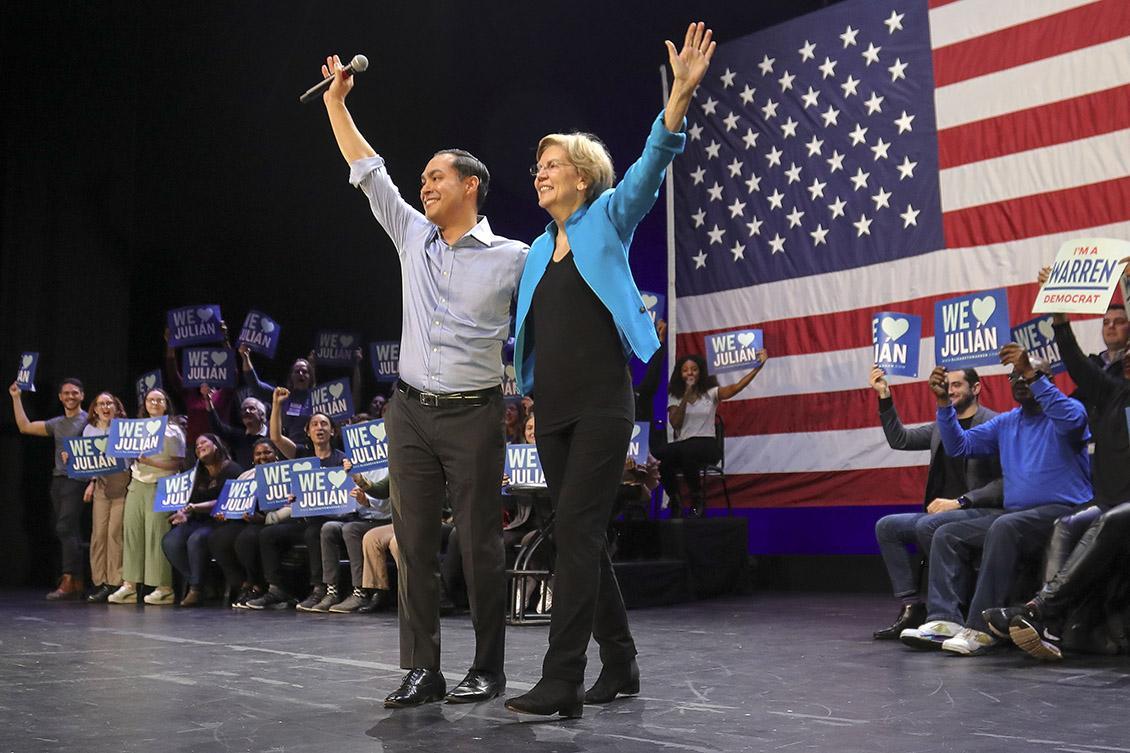 Castro, who was the only Latino in the 2020 Democratic field, lost little time in making an endorsement after dropping out of the race last week. In a video released on Monday, Castro tells Warren, “Nobody is working harder than you are.”

He also joined Warren on the campaign trail, taking the stage with her at a rally in Brooklyn, N.Y. He plans to campaign for her in Iowa and other battleground states, including his home state of Texas, where he served as the mayor of San Antonio from 2009 to 2014. The endorsement has fueled speculation of an eventual Warren-Castro ticket. —H.P.