Migrants rest on a sidewalk in Tripoli, Libya, after being rescued at sea in March. Associated Press/Photo by Mohamed Ben Khalifa

The United Nations migration agency will send home an additional 15,000 migrants from detention camps in Libya before the year ends, the agency announced Friday.

The International Organization for Migration (IOM) said it registered more than 400,000 migrants in Libya, though it estimates the total number ranges between 700,000 and 1 million. The group’s voluntary repatriation program already returned more than 14,000 migrants to their homes this year. The voluntary program includes migrants from Nigeria, Guinea, and Gambia, among other countries.

Increasing reports of migrant abuse prompted the extra repatriation efforts. CNN in November released a video from a property outside Libya’s capital city, Tripoli, where a salesman auctioned off a dozen people in six minutes for about $400 each. Several migrants who started off with plans to arrive in Europe narrated how smugglers sold them off for daily labor and how they were beaten and held in deplorable conditions.

“Scaling up our return program may not serve to fully address the plight of migrants in Libya, but it is our duty to take migrants out of detention centers as a matter of absolute priority,” said William Lacy Swing, the IOM director general.

More than 160,000 migrants have crossed the Mediterranean Sea and arrived in Europe this year, with 3,038 migrants dying en route, according to the IOM. The number of migrant arrivals dipped from the same time last year after Italy helped the Libyan coast guard stop smuggler boats from crossing the sea. But now thousands more migrants remain stranded in Libyan holding centers.

Libya descended into crisis in 2011 after NATO-backed rebels overthrew and killed longtime authoritative leader Muammar Qaddafi. The country’s political vacuum and insecurity has allowed traffickers who exploit migrants to thrive.

Since the release of the CNN video, more African leaders have stepped up to respond to the crisis. Ghanaian President Nana Akufo-Addo described the video as “gross and scandalous.” The country’s mission in Malta said it visited three detention centers in Tripoli and helped to repatriate some 168 detainees. Nigerian authorities worked with the IOM to repatriate 242 migrants on Wednesday. Abike Dabiri, Nigeria’s special adviser on foreign and diaspora affairs, said about 5,000 Nigerians returned from Libya in the past year.

The European Union, United Nations, and African Union last week set up an emergency plan to respond to the crisis during a summit in Ivory Coast. French President Emmanuel Macron said the plan includes an operational task force made up of European and African security services. “The goal will be in very short order to be able to arrest identified traffickers, dismantle these networks and their financing,” he said.

EU countries agreed to finance the voluntary return of migrants from Libya, currently led by the IOM. Vulnerable migrants who might later qualify for asylum will leave Libya for Chad or Niger before they reach their destination countries.

Sherine El Taraboulsi-McCarthy, a research fellow with the U.K.-based Overseas Development Institute, said any long-lasting solution would make the migrants’ needs a priority. “I don’t think there’s a quick fix for it, but the emergency plan should be to work with the local actors, not necessarily the government, and try to find a solution that would be in the best interest of the migrants,” she said. 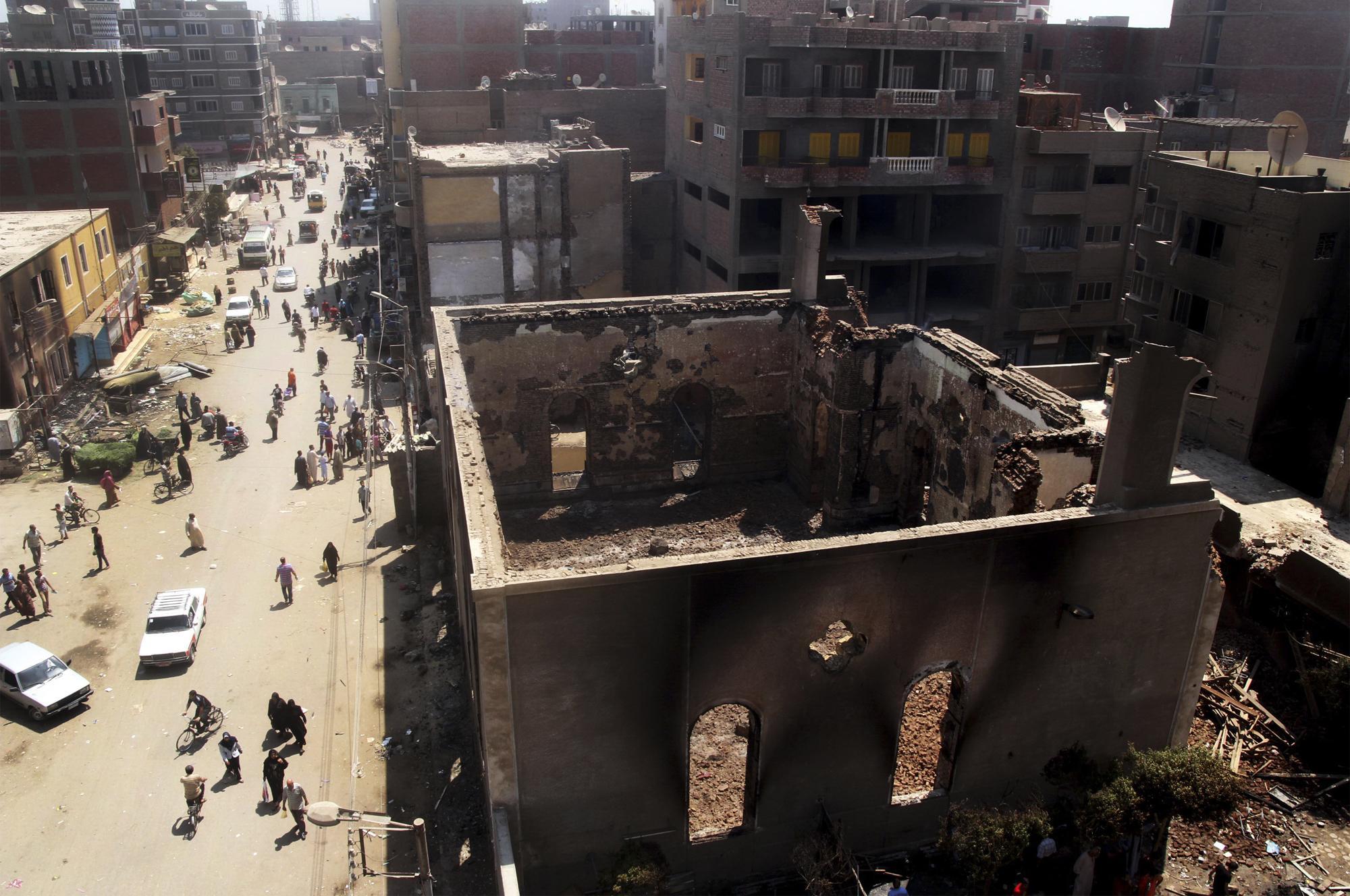 The Evangelical Church of Malawi in Minya governorate after a mob ransacked it in August 2013 Associated Press/Photo by Roger Anis, El Shorouk Newspaper

While some Coptic churches remain closed by Egyptian authorities, Gov. Essam el-Bedawi of the Minya governorate approved the building, restoration, and construction of several other churches in the past six months, according to World Watch Monitor.

Some churches waited more than 20 years for government permission, which is nearly impossible to obtain. Coptic news source Watani indicated the 21 new permits were for evangelical churches. Authorities also gave renovation permission to an evangelical church in Tama in the Sohag governorate on Nov. 17.

Some permits preceded recent meetings involving President Abdel Fattah el-Sisi and U.S. and international evangelical delegations. The reopening of an unlicensed Pentecostal church in October was viewed as a goodwill gesture ahead of a visit by U.S. Vice President Mike Pence later this month, according to World Watch Monitor. A local source told the news site that al-Sisi wants to “show the U.S. that Egypt is standing with the Christians and that there is no persecution in Minya governorate.”

But there is persecution, especially for Coptic churches, which continue to endure building closures and hostility from Muslim extremists.

A UN attorney chastised Egyptian leaders in November, demanding the reopening of all closed churches, including four Coptic churches in Minya that authorities shut down in October. El-Bedawi claimed it was because they were unlicensed. —Julia A. Seymour 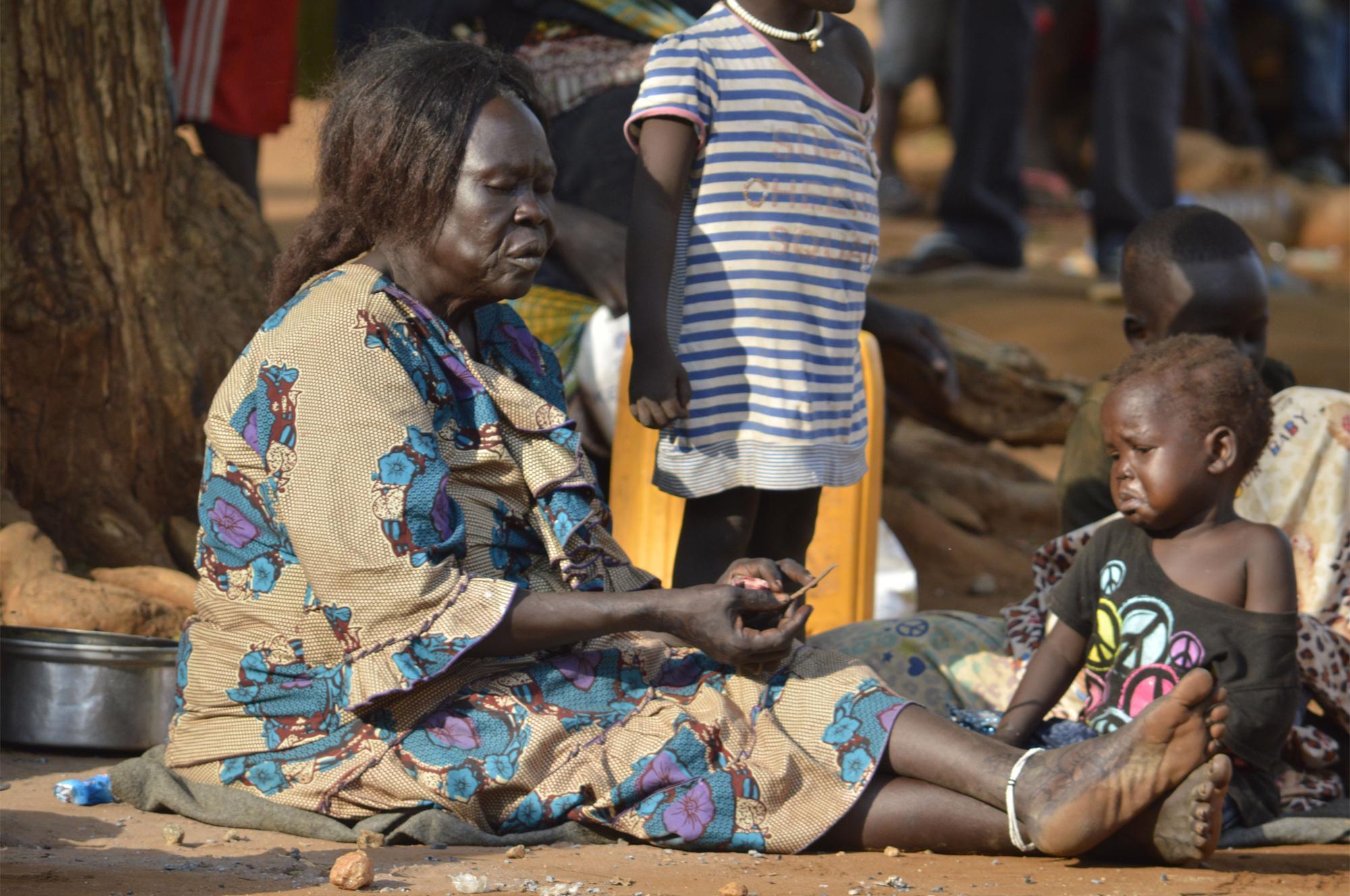 The Evangelical Church of Malawi in Minya governorate after a mob ransacked it in August 2013 Associated Press/Photo by Roger Anis, El Shorouk Newspaper

The number of women and girls in South Sudan who face sexual and physical violence is double the global average, the International Rescue Committee said in a joint report with George Washington University’s Global Women’s Institute. Up to 65 percent of women interviewed reported experiencing either sexual or physical violence, and most of the violence occurred within the home.

The report said women living in UN civilian protection sites in the capital city of Juba are most vulnerable to attacks. Some of the women said they found men sleeping and waiting for them when they went out at night to queue up at the distribution point. “They surrounded us,” they said. “They have guns, knives, sticks, and pangas [machetes].”

South Sudan’s civil war, which began in 2013, has killed tens of thousands of people and displaced another 4 million. The breakdown of the rule of law in South Sudan means perpetrators usually go unpunished. “If there is ever going to be long-term peace in South Sudan, violence against women and girls must be addressed, and women must have a seat at the table in finding solutions,” said Mary Ellsberg, director of the Global Women’s Institute. —O.O.

An appeals court in Vietnam last week upheld a blogger’s 10-year prison sentence. Authorities in June convicted Nguyen Ngoc Nhu Quynh of spreading propaganda by defaming the Communist regime in her Facebook posts. Quynh, also known by her pen name Me Nam, or Mother Mushroom, co-founded a network of bloggers in Vietnam. She wrote about human rights violations and civilian deaths in the country. Earlier last week, another Vietnamese court sentenced activist Nguyen Van Hoa to seven years in prison for producing videos and interviews on a Taiwanese factory’s toxic waste spill that led to an environmental disaster. U.S. Charge d’Affaires Caryn McClelland said Quynh is one of six people convicted this year for exercising their rights. “The trend of increased arrests, convictions, and harsh sentences of peaceful activists and students since early 2016 is deeply troubling,” she said. —O.O.

The Argentine navy ended the search for 44 crew members of a submarine 15 days after it went missing at sea. Navy spokesman Enrique Balbi said the search for the submarine will continue, but it is no longer considered a rescue mission. “More than double the number of days it would have been possible to rescue the crew have passed,” Balbi told reporters.

The ARA San Juan submarine went missing Nov. 15 after the captain reported water entered the snorkel, the navy said. Hours after the captain said he contained the problem, an explosion went off near the submarine’s location. Balbi said ships, aircraft, and personnel from 18 countries aided in the search. Relatives and friends of the missing crew members protested the end of the search and demanded more details on the submarine. —O.O.

The massive truck bombing that rocked Somalia’s capital in October killed more than 500 people, an official committee said in a final tally of casualties. The committee’s report said 512 people died and another 312 sustained injuries in the country’s worst terror attack. Some 62 people remain missing. On Oct. 14, bombs that officials said weighed between 1,300 and 1,700 pounds struck a crowded street in Mogadishu. No group claimed responsibility for the attack, but authorities blamed al-Qaeda affiliate al-Shabaab. Early estimates said more than 350 people died. —O.O.