Frustrated by congressional inaction on immigration initiatives, a cornerstone of his 2016 campaign, President Donald Trump decided this week to take executive action, sending the National Guard to the southern border and ordering immigration judges to clear more cases.

The immigration actions started on Good Friday when the Justice Department sent a memo to immigration court judges, ordering them to complete 700 cases a year. The quota is intended to reduce a backlog of immigration cases critics blame for enabling too many would-be immigrants to remain in the country indefinitely.

In a study published last year, the Government Accountability Office reported 437,000 immigration cases sat pending at the start of fiscal year 2015, with courts clearing only 199,000 cases by the end of that year. The backlog isn’t due to new cases, which declined 20 percent between 2009 and 2015, but to the rising popularity of continuances.

Immigration judges have the ability to temporarily adjourn a case, or issue a continuance, for a wide variety of reasons, including an attorney illness, government requests for more time to prepare a case, or technology malfunctions. But since 2006, continuances have become much more popular. Their use rose 23 percent between 2006 and 2015, with two-thirds of continuances recorded as respondent-related. The attorney general’s office has launched a review of continuance practices and this month invited interested groups to submit briefs on the issue.

In 2015, immigration judges completed an average of 807 cases each, but Andrew Arthur, a resident fellow with the Center for Immigration Studies, noted that each judge has an average of 1,837 cases pending. Even with no new cases, it would take more than two years to eliminate the backlog. Still, Arthur calls 700 cases per year a reasonable goal, given that it’s actually less than the average number of cases completed currently.

And Trump intends to make sure courts have fewer new cases to process in the coming months.

On Wednesday, the president deployed the National Guard to the U.S. southern border to help with enforcement efforts and act as a deterrent to immigrants trying to come into the country illegally. The administration did not say how many troops would deploy, how long they would stay, or how much the effort would cost, but Trump said the troops would stay “until we can have a wall.”

The governors of Texas, Arizona, and New Mexico quickly signaled their support, but critics decried the move as unhelpful theatrics. “Mexico is not an adversary,” retired Maj. Gen. Paul Eaton, a vocal Trump critic, told The New York Times. “Why would you present this offensive barrier to a friendly country?”

Former Presidents George W. Bush and Barack Obama both deployed National Guard troops to the southern border during their time in office to assist with apprehensions and drug seizures. But illegal border crossings have dropped dramatically since then. According to government statistics, U.S. Border Patrol agents apprehended just 303,916 immigrants in fiscal year 2017—the lowest number in 47 years. 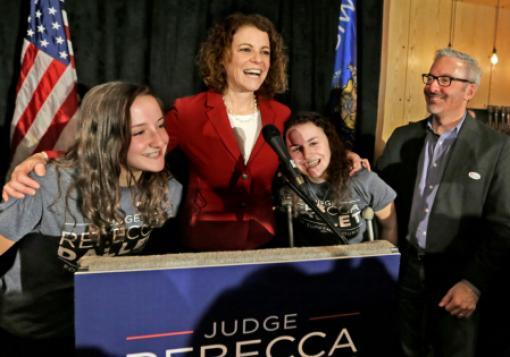 Judge Rebecca Dallet stands with her daughters Rachel (left) and Ellie (right) and husband, Brad, as they celebrate her victory. Associated Press/Photo by Rick Wood/Milwaukee Journal-Sentinel

A partisan win in a nonpartisan race

Democrats are crowing over a seemingly obscure judicial election in Wisconsin, citing it as evidence that even conservative voters have had it with Republicans.

President Donald Trump won Wisconsin by just 22,000 votes in 2016. Dallet won Tuesday by nearly 12 percentage points, with voter turnout at about 22 percent, which was typical for such state elections. But this is the first time in more than 20 years a non-incumbent, liberal candidate has won a seat on the Wisconsin Supreme Court.

Pundits are calling the contest another bellwether for midterm congressional elections in November. Dallet herself told a fundraising crowd in San Francisco, “We really set the stage with my race.” After the results came in, Walker tried to rally Republicans.

“Tonight’s results show we are at risk of a #BlueWave in WI,” he tweeted. “The Far Left is driven by anger & hatred—we must counter it with optimism & organization. Let’s share our positive story with voters & win in November.”

Despite Walker’s apparent alarm, political analysts see nothing surprising in the Wisconsin race.

“It is common for the non-presidential party to perform better in non-presidential elections, and the 2018 cycle has been no exception,” said Kyle Kondik with the University of Virginia Center for Politics. “That guarantees nothing for the fall, but the results are encouraging for Democrats.” —L.F. 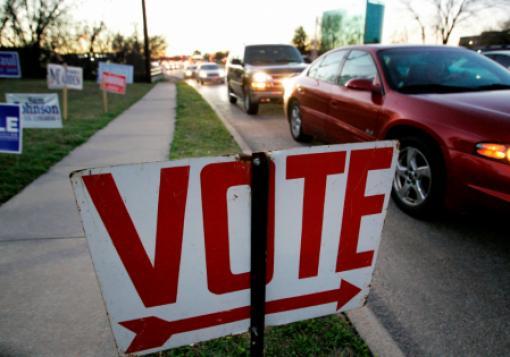 Judge Rebecca Dallet stands with her daughters Rachel (left) and Ellie (right) and husband, Brad, as they celebrate her victory. Associated Press/Photo by Rick Wood/Milwaukee Journal-Sentinel

A federal judge ruled this week that Texas violates federal law by not allowing people to register to vote when they renew their driver’s licenses online. U.S. District Judge Orlando Garcia of San Antonio said Texas must more fully comply with the National Voter Registration Act.

The Texas Civil Rights Project sued in 2016 saying the process for registering to vote after renewing a driver’s license online was confusing and misleading. The website directed voters to print out a form and return it to their county registrar, but some voters thought they were automatically registered to vote when they renewed their licenses, The Texas Tribune reported. Some didn’t find out they weren’t registered until Election Day.

“Because of these failures, countless Texans have been prevented from casting a ballot that counts, thereby unlawfully shutting people out of our democratic process,” said Beth Stevens, voting rights director with the Civil Rights Project. The state plans to appeal to the 5th U.S. Circuit Court of Appeals and insists its process is sufficient.

“The 5th Circuit will not give merit to such judicial activism because Texas voter registration is consistent with federal voter laws,” said Mark Rylander, spokesman for the Texas attorney general’s office.

The National Voter Registration Act of 1993 requires states to allow voters to sign up when applying for or renewing their driver’s licenses, receiving public assistance, and by mail. The act has received increased attention as some states push to require proof of citizenship from registered voters. Last year, Kris Kobach, the Kansas secretary of state who led President Donald Trump’s election fraud commission, proposed amending the federal law to clarify that states have the authority to enforce proof-of-citizenship rules, but the president has not pushed for such a change. —Lynde Langdon

Seventeen states, the District of Columbia, and six cities sued the U.S. government this week over a proposed addition to the census questionnaire asking about respondents’ citizenship. The plaintiffs say the question will lead immigrants to dodge the survey and will low-ball population numbers used to determine federal funding and legislative representation. Supporters of the plan argue that more data on the voting-age population of citizens will help the Justice Department enforce the National Voting Rights Act. —L.L.