On the eve of International Women’s Day, the 6th U.S. Circuit Court of Appeals ruled in favor of a man who identifies as a woman, ignoring appeals to religious liberty and declaring that Title VII of the Civil Rights Act of 1964 applies to those undergoing gender “transitioning.”

Wednesday’s decision marks the third time a federal appeals court has expanded the Title VII definition of “sex” beyond biological manhood and womanhood. Within the last year, the U.S. Court of Appeals for the 7th and 2nd circuits both ruled that “sex” includes sexual orientation. Those decisions, until the U.S. Supreme Court intervenes, stand as law, and employers in 10 states are required to recognize sexual identities as protected classes

The decision puts Christian business owners and parachurch ministries at risk of lawsuits for failure to comply with the new law, said Gary McCaleb, an attorney with the religious liberty law firm Alliance Defending Freedom (ADF).

“They are distorting the law,” McCaleb told me. “[Title VII] has nothing to do with affirming a person’s medical condition.”

After working five years as a funeral director for R.G. & G.R. Harris Funeral Homes in Detroit, Mich., Anthony Stephens informed owner Thomas Rost in 2013 he intended to have sex reassignment surgery, which required he live and dress as a woman for a year. Stephens told Rost he would return from his two-week vacation “in appropriate business attire” as Aimee Australia Stephens and requested a clothing stipend to offset the cost of a new wardrobe.

Rost fired Stephens because “he was no longer going to represent himself as a man,” prompting Stephens to file a sex discrimination complaint with the Equal Employment Opportunity Commission (EEOC) in 2014. ADF attorneys successfully defended Rost in federal court last year, but Stephens appealed to the 6th Circuit.

Rost testified he could not “in good conscience” permit Stephens to present himself as a woman to grieving clients. And his convictions about God-designed manhood and womanhood prevented him from paying a clothing stipend to help facilitate Stephens’ transition.

“Even if Rost’s religious exercise were substantially burdened, the EEOC has established that enforcing Title VII is the least restrictive means of furthering the government’s compelling interest in eradicating workplace discrimination against Stephens,” Judge Karen Nelson Moore wrote in the opinion.

If Rost does not appeal, the decision establishing “transgender and transitioning status” as protected classes will stand in Michigan, Ohio, Kentucky, and Tennessee.

Judicial review of congressional statutes requires judges interpret laws based on the original meaning of words. Instead, judges are citing precedents to create an ever-expanding definition of sex that has nothing to do with equal opportunity between men and women, McCaleb said.

The rulings empower the EEOC to force employers to affirm their employees’ self-perception instead of their true identity as image-bearers of God. 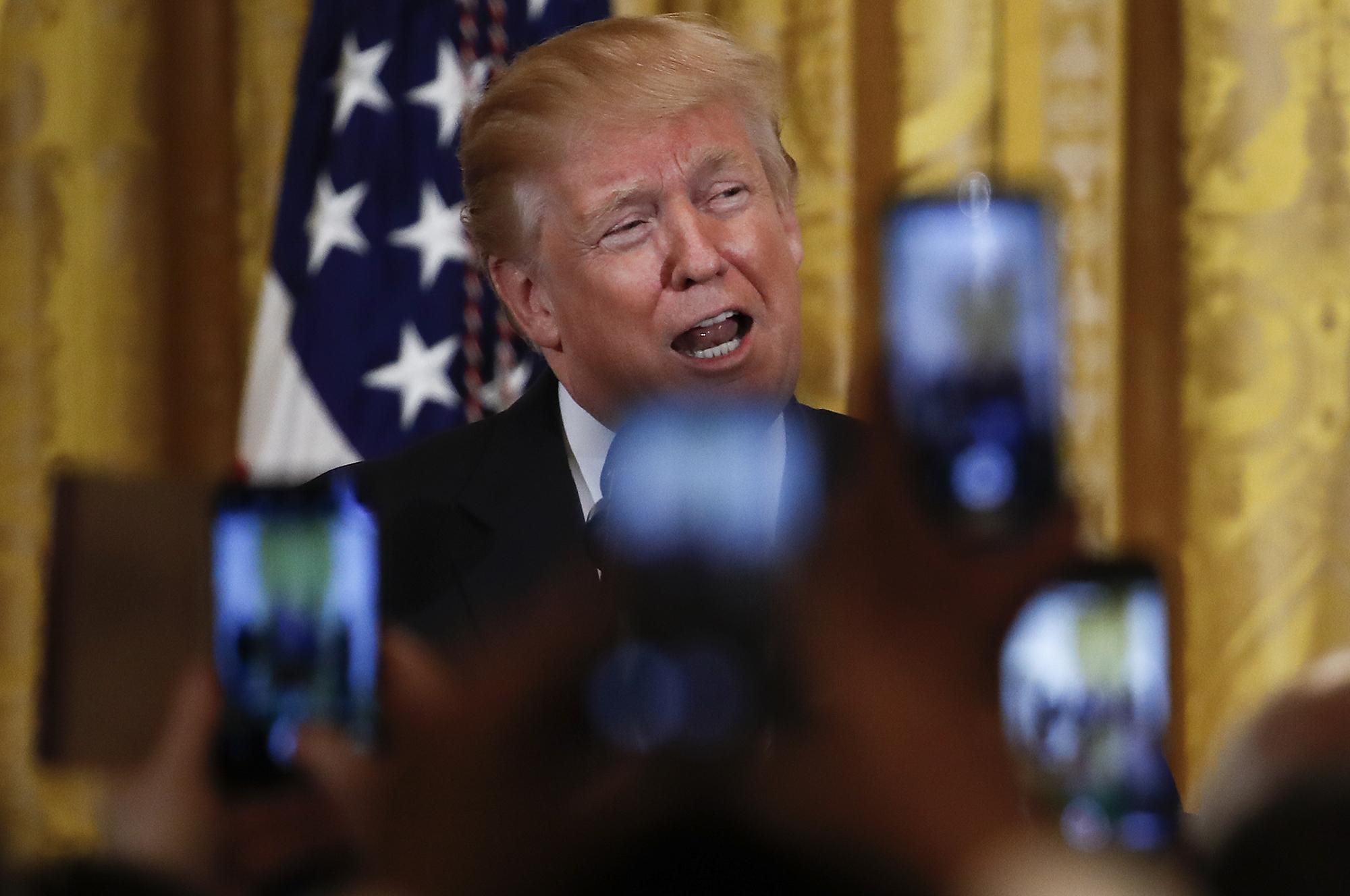 President Donald Trump speaks in the East Room of the White House in February. Associated Press/Photo by Carolyn Kaster

Before issuing a possible precedent-setting decision about Twitter’s role in First Amendment jurisprudence, a federal judge offered a compromise to President Donald Trump: Mute, don’t block, your Twitter critics. Seven plaintiffs sued the president in September claiming his social media site is the equivalent of public forum and blocking them violates the First Amendment of the U.S. Constitution.

By blocking followers, Trump can prevent users from seeing his posts or replying to them, shutting them out of a virtual town hall meeting, the plaintiffs argue. U.S. District Judge Naomi Buchwald suggested the president only mute his detractors, allowing them to read and post to his Twitter feed. Everyone but @realDonaldTrump will be able to see the muted followers’ comments.

“I’m not remotely suggesting that citizens have the right to insist someone in the government read their mail,” said Buchwald, following a hearing Thursday in a Manhattan courtroom. “No one has the time. There are not remotely enough hours in the day.”

A similar lawsuit was filed in October against three Wisconsin state representatives who blocked the Twitter account for One Wisconsin Now.

Judges have little case history upon which to build their decisions in this new First Amendment arena. Buchwald urged both parties to consider her compromise because both sides could be unhappy with her eventual ruling. —B.P. 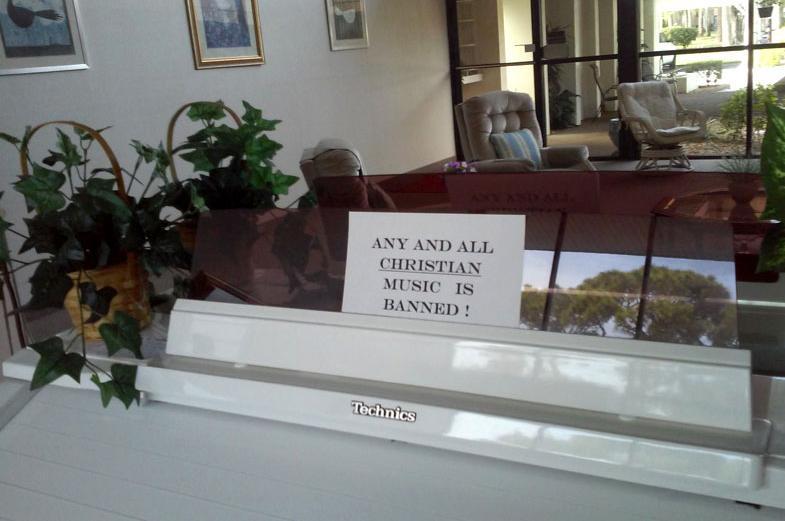 President Donald Trump speaks in the East Room of the White House in February. Associated Press/Photo by Carolyn Kaster

No religion in residence

In a display of anti-Christian bias that seems ripped from the headlines of The Babylon Bee, a Florida property management association banned a weekly Bible study class from using the Cambridge House condominiums’ social rooms. And, to drive home the point, someone posted a note on an organ in one of the social rooms: “Any and all Christian music is banned.”

But this is not satire. It is discrimination and a violation of the Fair Housing Act and Florida law, according to a complaint filed March 6 with the U.S. Department of Housing and Urban Development (HUD). Attorneys for First Liberty Institute sent the letter on behalf of Cambridge House resident Donna Dunbar, who leads the Bible study of fewer than 10 people.

The building management association listed no reasons for the creating a resolution Feb. 6 that bans “prayers and other religious services, observations, or meetings of any nature” from all common areas. But other social groups of similar size regularly use the common rooms for movie viewings, gaming, and card playing.

The HUD complaint also alleges management asked residents to remove all religious decorations from their doors and removed a “decorative angel fountain” and a statue of St. Francis of Assisi from the building’s courtyard. —B.P.

Greta Lindecrantz will testify in a capital murder case despite her earlier protestations that doing so violated her religious convictions against the death penalty. Though she was convinced before that her testimony for the prosecution would send her former client, Robert Ray, back to death row, the Mennonite now believes her refusal puts his life at risk, according to her attorney.

Incarcerated since Feb. 26 in the Arapahoe County, Colo., jail on contempt of court charges, Lindecrantz has refused to testify in the rehearing of Ray’s 2009 capital murder conviction and death penalty sentencing. But the inmate’s new attorneys told Lindecrantz that her testimony could save Ray, prompting her to change her mind. A hearing for her testimony has not been scheduled. —B.P.