Throughout creation boundless evidence exists to show God’s protection and provision for His creatures, including baby chicks cocooned within their eggshells. Researchers at McGill University in Montreal recently discovered just how, in their words, “remarkably designed” the unassuming chicken egg is.

New advances in technology recently made examining eggshells in the lab possible. “Eggshells are notoriously difficult to study by traditional means because they easily break when we try to make a thin slice for imaging by electron microscopy,” Marc McKee, the lead researcher, said in a statement. He referred to the egg as an “almost perfect chamber” that contains all the nutrients a chick requires.

An eggshell needs enough strength to prevent breaking but enough softness for the chick to peck through when fully developed. In the study, reported in Science Advances, the researchers found eggshells contain three different layers whose nanostructures change over time during incubation.

The shell is hardest when the hen first lays and sits on the egg. But during incubation, the calcium in the inner layer begins to slowly dissolve, making the mineral available to form the bones of the developing chick. The slow dissolving of the inner layer’s calcium provides the added benefit of weakening the shell so that by the time the chick reaches full development it can break through to the outside world.

Imitating the way God designed the eggshell, the researchers found they could produce a similar nanostructure in the lab by adding a certain protein to mineral crystals. The scientists hope their discovery will allow human engineers to design new, synthetic nanocomposite materials with novel properties. 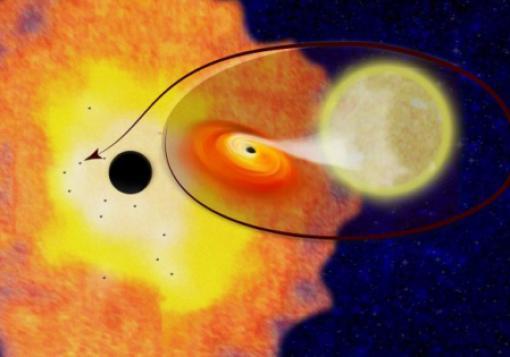 A drawing shows how smaller black holes could orbit a supermassive black hole at the center of a galaxy. Columbia University

Columbia University astrophysicists just discovered a dozen black holes held captive in the center of our galaxy by a supermassive black hole known as Sagittarius A. A black hole is a dying star that collapses inward from its own weight. Its strong gravitational pull will not allow even light to escape.

For more than two decades astronomers have believed that thousands of smaller black holes surround supermassive black holes at the centers of large galaxies, but they could not find evidence of them.

Because black holes don’t emit any light, astronomers can’t observe them. In the past scientists have searched for the elusive celestial bodies by looking for the bright bursts of X-rays produced when a black hole and a star begin to orbit each other. But even around Sagittarius A, the mergers take place so far from Earth that bursts of X-ray bright enough to observe occur only about once every 100 to 1,000 years, Charles Hailey, the lead researcher said in a statement.

In the study, published in Nature, the researchers for the first time looked for the weaker, but steadier, X-rays emitted after the initial bonding between a star and a black hole. The new method paid off, and the scientists found 12 binary black holes within three light years of Sagittarius A. Extrapolating from their observations, the scientists believe 300 to 500 black hole binaries and about 10,000 isolated black holes exist in the center of the Milky Way.

The discovery will help astronomers study the interactions between large and smaller black holes, which should help them better understand how large objects in the universe interact, the researchers said. —J.B. 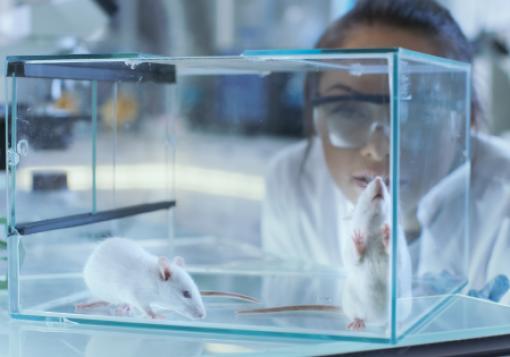 A drawing shows how smaller black holes could orbit a supermassive black hole at the center of a galaxy. Columbia University

Results of preclinical drug testing with animals may not offer the assurances of safety and effectiveness that we often think they do, according to a study published in PLOS Biology.

After testing a new drug on animals, researchers usually write up their findings in an investigative brochure to submit to regulatory agencies and review boards that must approve human trials. But, according to the study, the brochures often lack crucial information that the agencies and review boards need to adequately evaluate the animal trials.

The researchers looked at 109 brochures, which reported on 708 animal studies that institutional review boards approved between 2010 and 2016. They found that less than 5 percent of the brochures described any measures the researchers took to assure the validity of the study, and 89 percent did not offer documentation that the researchers secured peer review or independent evaluation. Only 6 percent of investigational brochures reported results showing that the tested drug proved ineffective, causing the researchers to raise the possibility of bias in data reporting.

According to a recent study appearing in Biostatistics, less than 10 to 15 percent of human clinical trials prove successful. The new study helps explain why so many results in animal tests don’t hold up in human trials, Malcolm Macleod, a neurologist at the University of Edinburgh, told Science Magazine. —J.B.

A simple shot to cure cancer?

Stanford University researchers will soon begin the first human trial of a cancer treatment that cured up to 97 percent of tumors in mice. The treatment consists of two immune-stimulating agents injected directly into solid tumors.

The therapy is rapid, relatively inexpensive, and less likely to cause the adverse side effects often produced by methods that stimulate the entire immune system. In the study, published in the peer-reviewed journal Science Translational Medicine, the researchers transplanted two lymphoma tumors at two different sites in 90 mice. In 87 of the mice, both the treated tumor and the untreated cancer regressed. The tumors returned in three of the mice but regressed after a second treatment. The researchers obtained similar results in mice with breast, colon, and melanoma tumors.

Although approval from the Food and Drug Administration remains a long way off, Ronald Levy, the lead researcher, believes if approved the therapy could eradicate many tumor types. “I don’t think there’s a limit to the type of tumor we could potentially treat, as long as it has been infiltrated by the immune system,” he said in a statement. —J.B.

The letter writers threatened to boycott all collaboration with any part of the university until its president affirms that the center will not develop autonomous weapons. The authors indicated they previously sought such assurance with no success.

Autonomous weapons “will permit war to be fought faster and at a scale greater than ever before” and will allow terrorists to use them against innocent populations, the letter stated. Urging KAIST to ban this technology, the experts wrote, “This Pandora’s box will be hard to close if it is opened.”

The United Nations is currently discussing ways to contain the threat posed by the development of autonomous arms. —J.B.