And its influence on a secular historian

In Dominion: How the Christian Revolution Remade the World, scholar Tom Holland notes that ancient Rome had no problem assigning divine status to victors, as measured by the power to crucify opponents—but to see a crucified man as God was anathema. He shows how the last-shall-be-first understanding has played out over two millennia throughout the West and then the whole world, as the cross became a symbol of courage amid adversity rather than disgrace.

Dominion leaves me wondering, though, whether the Christian revolution may be remaking the author. As the following excerpt from the closing section of his book (courtesy of Basic Books) shows, Holland, at age 52, is still a divided soul. His father is an atheist and Holland clearly absorbed Darwinian materialism, but his “devout Anglican” mother raised him with Christian understanding, so he did not develop a “visceral association of Christianity or institutional religion with repression or dogma or illiberalism.”

In 2016, Holland wrote an article for the New Statesman published under the headline “Why I Was Wrong About Christianity.” He said he used to believe that his humane beliefs came from ancient Greece or Rome, but Christianity “is why we generally assume that every human life is of equal value. … In my morals and ethics, I have learned to accept that I am not Greek or Roman at all, but thoroughly and proudly Christian.” However, Holland also said, “I have seen no evidence that would satisfy me that anything supernatural exists.” But it seems to me a willingness to suffer for others is not natural.

Some of Holland’s specific historical judgments are questionable, but he’s right that many of the writers and leaders most hostile to Christianity are unconsciously operating within its framework. His powerful writing may lead some who discount Christianity to take a second look.

Dominion made WORLD’s short list for 2019 Book of the Year in the Understanding the World category. —Marvin Olasky

The Weak Things of the World

Writing this book, I have often found myself thinking about my godmother. Deborah Gillingham died in 2009, but because I loved her very much, and because she was a constant presence during my childhood, my memories of her have never faded. This may seem, in a book that has spanned millennia, a self-indulgent note on which to end; but the story it tells, the story of how Christianity transformed the world, would never have happened without people like my Aunty Deb. A committed and faithful member of the Church of England, she took her duties as my godmother with the utmost seriousness. Having vowed at my baptism to see that I was brought up in the Christian faith and life, she did her best to keep her word. She never allowed me to forget that Easter was about much more than the chocolate eggs that she annually lavished on me. She bought me my first children’s Bible, lovingly selected because it featured vibrant illustrations of pharaohs and centurions, and she knew me well enough to understand that this was the best way to ensure that I would read it. Above all, through her unfailing kindness, she provided me with a model of what, to a committed Christian, the daily practise of her faith could actually mean. At the time, of course, I did not think of her in these terms. She was just Aunty Deb. But over the years, as I read more and more about the great sweep of Christian history, about crusades, and inquisitions, and religious wars, about popes with fat, jewelled fingers and Puritans with stern, beetling frowns, and about all the great shocks and convulsions that Christianity had brought to the world, I found myself thinking of her more and more as a part of this same story. Which in turn means that I am a part of it as well.

It was always in the home that children were likeliest to absorb the revolutionary teachings that, over the course of two thousand years, have come to be so taken for granted as almost to seem human nature.

I have sought, in writing this book, to be as objective as possible. Yet this, when dealing with a theme such as Christianity, is not to be neutral. To claim, as I most certainly do, that I have sought to evaluate fairly both the achievements and the crimes of Christian civilisation is not to stand outside its moral frameworks, but rather—as Nietzsche would have been quick to point out—to stand within them. The people who, in his famous fable, continue to venerate the shadow of God are not just church-goers. All those in thrall to Christian morality—even those who may be proud to array themselves among God’s murderers—are included among their number. Inevitably, to attempt the tracing of Christianity’s impact on the world is to cover the rise and fall of empires, the actions of bishops and kings, the arguments of theologians, the course of revolutions, the planting of crosses around the world. It is, in particular, to focus on the doings of men. Yet that hardly tells the whole story. I have written much in this book about churches, and monasteries, and universities; but these were never where the mass of the Christian people were most influentially shaped. It was always in the home that children were likeliest to absorb the revolutionary teachings that, over the course of two thousand years, have come to be so taken for granted as almost to seem human nature. The Christian revolution was wrought above all at the knees of women. …

Today, as the flood tide of Western power and influence ebbs, the illusions of European and American liberals risk being left stranded. Much that they have sought to cast as universal stands exposed as never having been anything of the kind. Agnosticism—as Huxley, the man who coined the word, readily acknowledged—ranks as ‘that conviction of the supremacy of private judgment (indeed, of the impossibility of escaping it) which is the foundation of the Protestant Reformation’. Secularism owes its existence to the medieval papacy. Humanism derives ultimately from claims made in the Bible: that humans are made in God’s image; that his Son died equally for everyone; that there is neither Jew nor Greek, slave nor free, male nor female. Repeatedly, like a great earthquake, Christianity has sent reverberations across the world. First there was the primal revolution: the revolution preached by Saint Paul. Then there came the aftershocks: the revolution in the eleventh century that set Latin Christendom upon its momentous course; the revolution commemorated as the Reformation; the revolution that killed God. All bore an identical stamp: the aspiration to enfold within its embrace every other possible way of seeing the world; the claim to a universalism that was culturally highly specific. That human beings have rights; that they are born equal; that they are owed sustenance, and shelter, and refuge from persecution: these were never self-evident truths.

Repeatedly, like a great earthquake, Christianity has sent reverberations across the world.

The Nazis, certainly, knew as much—which is why, in today’s demonology, they retain their starring role. Communist dictators may have been no less murderous than fascist ones; but they—because communism was the expression of a concern for the oppressed masses—rarely seem as diabolical to people today. The measure of how Christian we as a society remain is that mass murder precipitated by racism tends to be seen as vastly more abhorrent than mass murder precipitated by an ambition to usher in a classless paradise. Liberals may not believe in hell; but they still believe in evil. The fear of it puts them in its shade no less than it ever did Gregory the Great. Just as he lived in dread of Satan, so do we of Hitler’s ghost. Behind the readiness to use ‘fascist’ as an insult there lurks a numbing fear: of what might happen should it cease to be taken as an insult. If secular humanism derives not from reason or from science, but from the distinctive course of Christianity’s evolution—a course that, in the opinion of growing numbers in Europe and America, has left God dead—then how are its values anything more than the shadow of a corpse? What are the foundations of its morality, if not a myth?

A myth, though, is not a lie. At its most profound—as Tolkien, that devout Catholic, always argued—a myth can be true. To be a Christian is to believe that God became man and suffered a death as terrible as any mortal has ever suffered. This is why the cross, that ancient implement of torture, remains what it has always been: the fitting symbol of the Christian revolution. It is the audacity of it—the audacity of finding in a twisted and defeated corpse the glory of the creator of the universe—that serves to explain, more surely than anything else, the sheer strangeness of Christianity, and of the civilisation to which it gave birth. Today, the power of this strangeness remains as alive as it has ever been. It is manifest in the great surge of conversions that has swept Africa and Asia over the past century; in the conviction of millions upon millions that the breath of the Spirit, like a living fire, still blows upon the world; and, in Europe and North America, in the assumptions of many more millions who would never think to describe themselves as Christian. All are heirs to the same revolution: a revolution that has, at its molten heart, the image of a god dead on a cross. 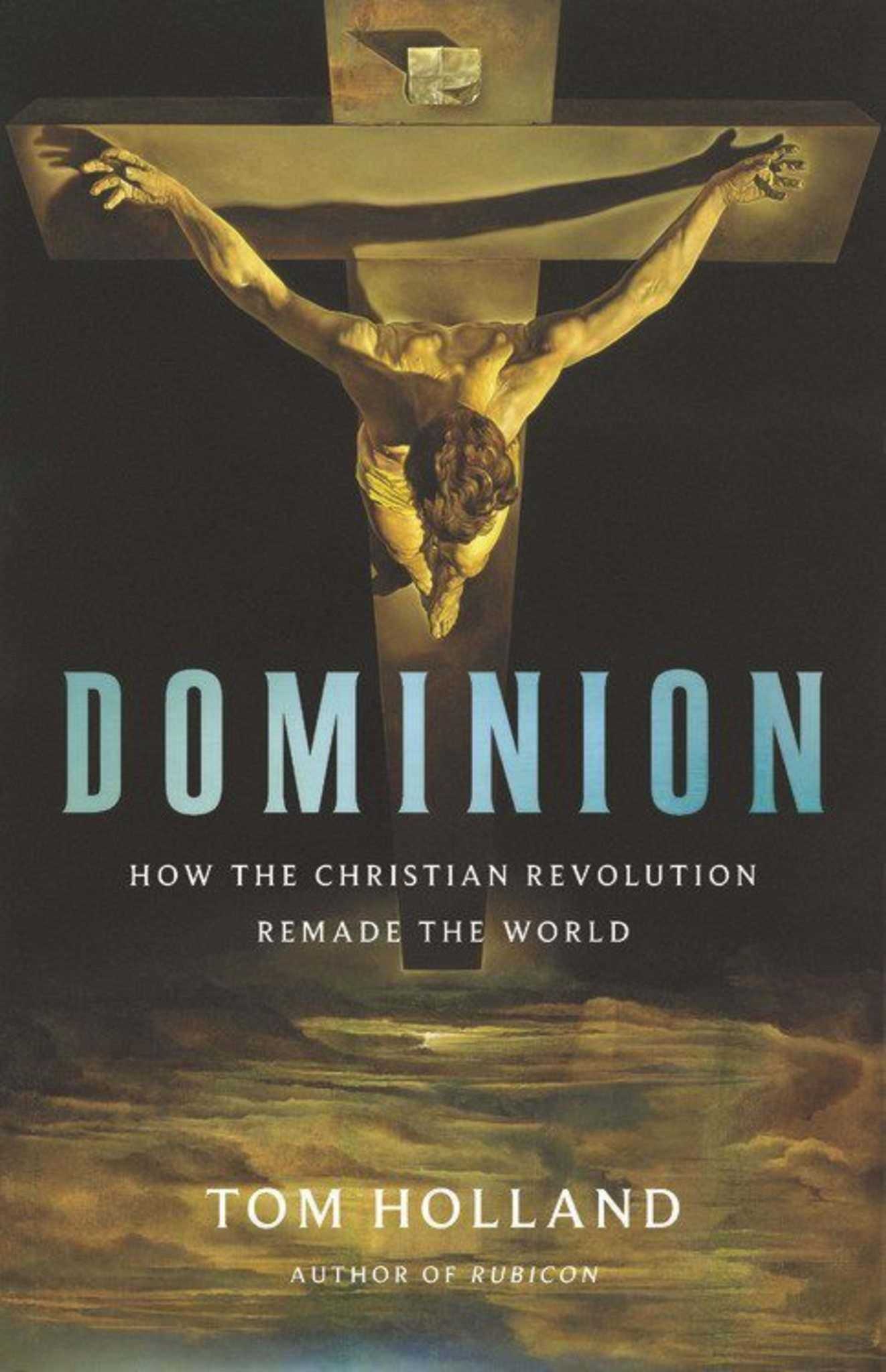 Tom Holland Tom is an author, historian of the ancient world, translator of Greek classical texts, and documentary writer. He lives in London and contributes regularly to The Guardian, The Times of London, The Wall Street Journal, and The New York Times.
COMMENT BELOW

After reading this over it seems that the author knows little of the Holy Spirit but sees Christianity as a religion.  He does not seem to know the true meaning of "church" which literally means "the called-out (ones)".