Christian parents have one overarching goal for their children: Teach them to love and follow Jesus. The faith children see modeled at home and at church and the truths they learn from parents and pastors shape their own faith formation. But new research from Canadian-based think tank Cardus suggests where children go to school also plays a significant role in determining whether they will carry their parents’ faith into adulthood.

Children who graduate from evangelical, Protestant high schools report significantly higher belief in orthodox Christian teachings; are more likely to pray, read the Bible, attend church regularly, and tithe; and are less likely to switch religious affiliation or turn from their faith as adults, according to the Cardus survey.

Those results challenge the conventional wisdom that schooling doesn’t really have an effect on faith, said Beth Green, education program director at Cardus.

Researchers at the University of Notre Dame used Cardus Education Survey data, which included respondents from the United States and Canada, to determine how much credit to give parents, church, and schooling for nurturing a child’s faith into adulthood. They also attempted to quantify the role of three indirectly related influencers—post-graduation marital status, number of children, and college attendance—on faith decisions.

Graduates of evangelical, Protestant schools are more likely than their public school counterparts to attend church regularly as adults, even if they came from similar family and socio-economic backgrounds. They’re also more likely to be married, have children, and have attended a Christian college, factors that similarly influence church ties. The researchers determined about one-third of the effect of schooling on church attendance came from those indirect sources. And while choosing a mate or a college matters in faith formation, secondary schooling helps put students on that path, Green said.

For too long, Christians, including church leaders, have treated education decisions like choices at a shopping mall, tending to consider faith and education as separate matters, Green said. The Cardus survey challenges that mindset.

“When we have a conversation about church attendance, when we as members of church congregations think about how we do life together, people’s educational choices matter, too,” she said. “It’s important to think about the messages young people get in their school life.”

Not only are Christian school graduates more likely to attend church, they’re also more likely to be involved in church ministry, through volunteering or leadership roles. That has direct implications faith leaders need to take into account, especially when considering the faith formation of congregants who did not attend Christian schools, Green said.

The Cardus survey did not delve into the reasons why Christian school attendance has such a strong effect on faith formation. But Green speculated the benefits probably come from lifelong habit formation: “The practices that regularly take place in a school community shape you.”

Education is about more than just downloading information into malleable minds. The way teachers set up relationships in the classrooms and model Christian values shapes the way students view the world. While secular culture views education as a means to an end—getting a job and making good money—Christian education emphasizes character formation at least as much as, if not more than, academic results.

“Christian schools care about those broader outcomes,” Green said. “It’s in those spaces that our data shows distinctive factors for graduates.” 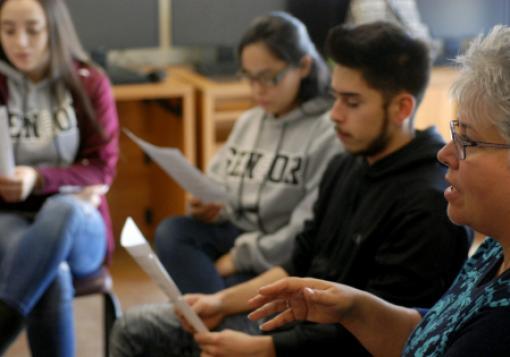 High school seniors talk about college life at the Academy for Technology and the Classics in Santa Fe, N.M. Associated Press/Photo by Morgan Lee

High schoolers in New Mexico might soon have to apply to at least one college or prove they have other productive post-graduation plans before they can pick up their diplomas. Lawmakers are considering adopting the new requirement as a way to boost the state’s college enrollment.

“There’s a reason we call graduation commencement because it’s the beginning of their future,” said state Sen. Daniel Ivey-Soto. “Let’s take that seriously.”

The requirement is based on a similar measure in Chicago, which mandates graduates have an acceptance letter from a community college or university, unless they are joining the military or entering an apprenticeship program. Proof of post-graduation employment waives the requirement.

Lawmakers backing the New Mexico bill don’t want to force students to go to college if they don’t want to. But state Rep. Nate Gentry thinks making them go to the trouble of applying will encourage more of them to enroll. Between 2010 and 2016, enrollment at New Mexico colleges and universities dropped 14 percent. The state also has the second-highest unemployment rate in the country at 6.5 percent.

Educators are skeptical, with some complaining about the additional work required to help all graduates fill out college applications. Teachers unions are already asking for more money for overseeing such additional tasks. —L.J. 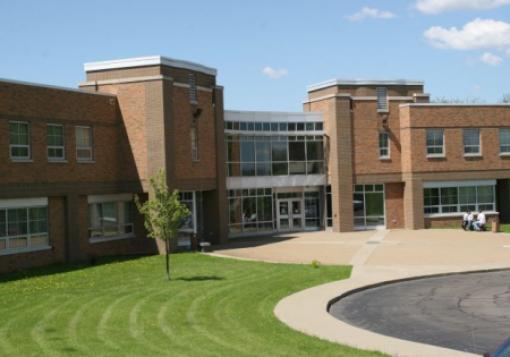 High school seniors talk about college life at the Academy for Technology and the Classics in Santa Fe, N.M. Associated Press/Photo by Morgan Lee

West Virginia lawmakers could decide as early as this week whether to make community college free for every student in their state. So-called free tuition plans, where taxpayers pick up the bill for eligible students, are becoming increasingly popular, even in Republican-controlled states. Supporters of the West Virginia initiative say it will boost the state’s economic future. Students receiving the scholarship, which only kicks in after other state and federal aid, would have to stay in West Virginia for two years after graduation, or pay the money back. State officials estimate the program will cost $8 million initially. The state Senate unanimously approved the measure, and Gov. Jim Justice supports it. Other states with free community college tuition programs include Tennessee, New York, Oregon, California, Rhode Island, Nevada, Kentucky, and Arkansas. —L.J.