Americans believe children get the best education at private and parochial schools, according to a Gallup poll released Tuesday.

When asked about the five types of schooling offered in the United States, survey respondents ranked independent private schools first and public schools last, based on the quality of the education. Here’s how the rankings broke down when surveyors asked about schools’ ability to provide an excellent or good education:

Both Democrats and Republicans shared a similarly high view of private and parochial education but differed on the other options. Among Democrats, charter and public schools ranked the same, 48 percent, while homeschooling came in last with 38 percent. Republicans ranked public schools last, with 38 percent saying they offered a good or excellent education, while charters got 68 percent and homeschooling 55 percent.

The biggest difference between Republicans and Democrats showed in their evaluation of charter schools. The view of charters remained unchanged among Republicans, with 62 percent saying they provide an excellent or good education. But appreciation for charters among Democrats fell 13 percentage points, from 61 to 48 percent.

That drop mirrors results from this year’s EdNext poll, which showed overall support for charter schools has dropped by 12 percentage points in the last 12 months. The changing attitude could be due in part to what seems like a relentless drumbeat against school choice, a cacophony that’s only grown louder since Donald Trump became president. Charters once offered a school choice option both Democrats and Republicans could support. But now, some say they’re too closely tied with Trump and Education Secretary Betsy DeVos.

American Enterprise Institute (AEI) education policy expert Rick Hess cautions against drawing too many broad conclusions from the EdNext poll, mostly because it represents a statistical anomaly. Polls have shown a steady increase in support for charters since Minnesota adopted the first charter law in 1991, Hess, along with AEI research assistant Amy Cummings, wrote in an op-ed for USA Today this week. The sudden drop “seems to come out of the blue.”

“That should give pause to those racing to offer grand explanations,” Hess and Cummings conclude. “After all, while we may indeed be entering a new phase of the charter school debate—one where charters have lost much of their luster—prudence suggests awaiting further confirmation before concluding we’ve just witnessed a sudden about-face in a two-decade trend.”

The EdNext poll offers better news for proponents of other forms of school choice. Overall, opposition to tax credit scholarships and vouchers, the two most common forms of choice, has fallen. Last year, 29 percent of poll respondents said they opposed tax credit scholarships. This year, opposition fell to 24 percent. That could bode well for the Trump administration, which has floated the possibility of creating a federal tax credit program. Opposition to vouchers dropped from 44 percent last year to 37 percent this year.

Vouchers enjoy more support when they’re described as mechanisms for choice, rather than as a method for giving taxpayer money to private schools. Only 28 percent of respondents like the idea of using “government funds” to pay for private education. Education savings accounts, which are similar to vouchers but provide more flexibility in how the funds are used, also have limited support, with just 37 percent of respondents saying they like the idea. 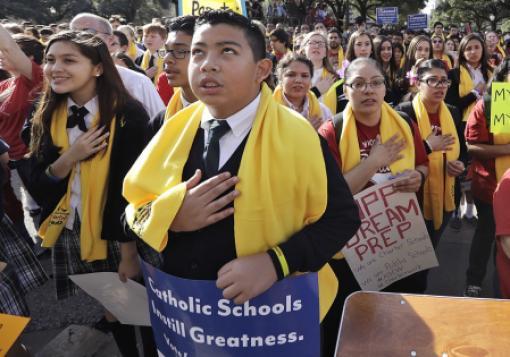 A look at the nation’s private schools

’Tis the season for education-related surveys. The latest National Center for Education Statistics report has some interesting findings about private schools.

During the 2015 school year, 4.9 million U.S. students attended 34,576 elementary and secondary private schools. Of those, 67 percent (enrolling 78 percent of students) had a religious foundation. The largest number, 8,954, categorized themselves as unaffiliated with a specific church or denomination. The second largest number, 7,008, belonged to the Catholic Church.

Average enrollment topped out at 142 students, with 46 percent of schools enrolling fewer than 50 students. Kindergarteners made up the biggest class, with 466,475 students. By first grade, the number of students attending private school dropped by 20 percent, highlighting a retention problem school leaders have grappled with for years.

Paired with the Gallup poll results, the private school survey raises an interesting, if not new, question. While a vast majority of Americans believe private schools offer the best education, only about 10 percent of parents send their students to such schools. Cost surely contributes to that disparity. How different would the American education landscape be if all parents could afford to send their children to the school of their choice? —L.J. 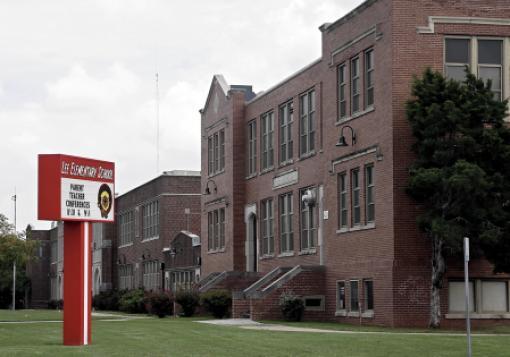 What’s in a name?

The debate over Confederate monuments and memorials has moved to the nation’s K-12 public schools, many of which are named for prominent Civil War figures. School boards across the country are considering whether to rechristen campuses whose names are now synonymous with icons of the white supremacist movement.

According to the National Center for Education Statistics, at least 138 public schools bore the names of Gens. Robert E. Lee and Thomas “Stonewall” Jackson and Confederate States of America President Jefferson Davis. Schools named for less well-known Confederate figures are not included in that count, which likely makes the number much higher.

The debate over public school names comes amid the national frenzy to purge all references to the Confederacy from public life. The push is especially strong on college campuses, where white supremacists have worked to recruit students with rallies and marches.

But the effort to rename public schools is nothing new. Following the violence in Charlottesville, Va., during which one woman died, the slow trickle of change probably will become a flood.

A federal judge in Arizona ruled Tuesday that state lawmakers acted with discriminatory intent in adopting a 2010 law targeting a Mexican-American studies program in the Tucson school district. The law banned classes designed primarily for students of a particular ethnic group. Students sued, and U.S. District Judge A. Wallace Tashima ruled the law violated their constitutional rights. Tashima previously upheld most of the law, and a federal appeals court agreed. But the court asked Tashima to reconsider the question of whether racism motivated the law’s adoption. Although he found that it did, Tashima said he’s not sure what the remedy might be. Under the law, Tucson school officials developed new courses taught at all the district’s high schools that focus on “culturally relevant” topics. —L.J.

A Harvard University faculty panel in July recommended a ban on all single-gender campus clubs. Claims of sexual assault and underage drinking at the university’s secretive all-male groups, known as “final clubs,” drove the decision. Now a group of 20 faculty members, led by former dean Harry Lewis, is pushing back against the proposal. They say a ban would violate the “right of free association.” Harvard President Drew Faust will make the final decision on the ban. —L.J.