In the 20 years since the shooting massacre at Columbine High School in Littleton, Colo., school safety has become a $2.7 billion industry that is still growing, according to IHS Markit. Schools across the country are spending millions of dollars developing training protocols, hiring armed guards, and installing metal detectors and security cameras. Texas and Florida even passed legislation recently that allows certain teachers to carry guns on campus.

But with two deadly shootings this month at the University of North Carolina at Charlotte and STEM School Highlands Ranch in Colorado, communities are wondering what more can they do and whether measures taken so far are sufficient to protect students.

A poll conducted by the University of Chicago in March found that more than two-thirds of parents believe that schools are less safe now than they were prior to Columbine. The survey also showed that the majority of parents agree that lockdown drills, metal detectors, and armed security guards all make schools safer.

But Benjamin Fisher, a University of Louisville criminal justice professor and an expert on school safety, believes the difference between perception and reality is stark.

“There’s not evidence that having more target-hardening is going to prevent mass school violence,” he said. “If you have all bulletproof windows in your school, a shooter is going to find a different way to get in the school.”

Fisher explained that the trend of school fortification arises out of an understandable desire to do something to combat the perception that schools are somehow not safe enough. More and more researchers are arriving at similar conclusions about the ineffectiveness of what is being done in schools right now to prevent armed attacks.

According to the Centers for Disease Control and Prevention, unintentional injuries, not homicides, consistently and overwhelmingly top the list as the leading cause of death for all children and teens. The category includes many types of fatalities including falls, burns, poisonings, and motor vehicle accidents.

The bottom line? Children and teens are statistically much more likely to die in an accident on their way to school rather than once they arrive. And fortifying schools can have unintended negative consequences, according to Fisher: “I fear that we’re training future citizens to go out and feel untrusted and [become] used to being under surveillance. And I see a lot of problems with that.”

Still, he added, the impulse to protect children in any way possible is difficult to resist.

“There’s absolutely the compulsion to react to do something. And nobody wants sort of the worst-case scenario to happen in their school,” Fisher said. “I empathize with them. As a researcher, I say the statistics don’t back that up as a good strategy, but as a person who cares about kids, I totally understand that.”

In both the UNC Charlotte and STEM School Highlands Ranch shootings, the heroism of ordinary students—not beefed up security measures—saved lives. Young men at both schools hurled themselves at the armed attackers, disabling them and effectively shutting down their rampages.

Riley Howell in Charlotte and Kendrick Castillo in Highlands Ranch paid the ultimate price for their sacrificial acts and are credited with saving countless lives. They were aided by others who acted courageously, as well. Highlands Ranch survivor Joshua Jones tells how he, Castillo, and fellow student Brendan Bialy reacted as soon as they saw one of the attackers pull a gun.

“When it actually happened, I had to make that decision that nobody should really ever have to make, which was run towards a gunman or run away from them,” Jones said on ABC’s Good Morning America. “I chose to run towards them.”

Albert Mohler, president of The Southern Baptist Theological Seminary and a WORLD News Group board member, said Friday on The Briefing podcast, “Sometimes, given the kind of murderous assaults that take place elsewhere in society, even in the midst of that undeniable horror, there are moments that remind us that human beings are also capable of incredibly heroic action.” 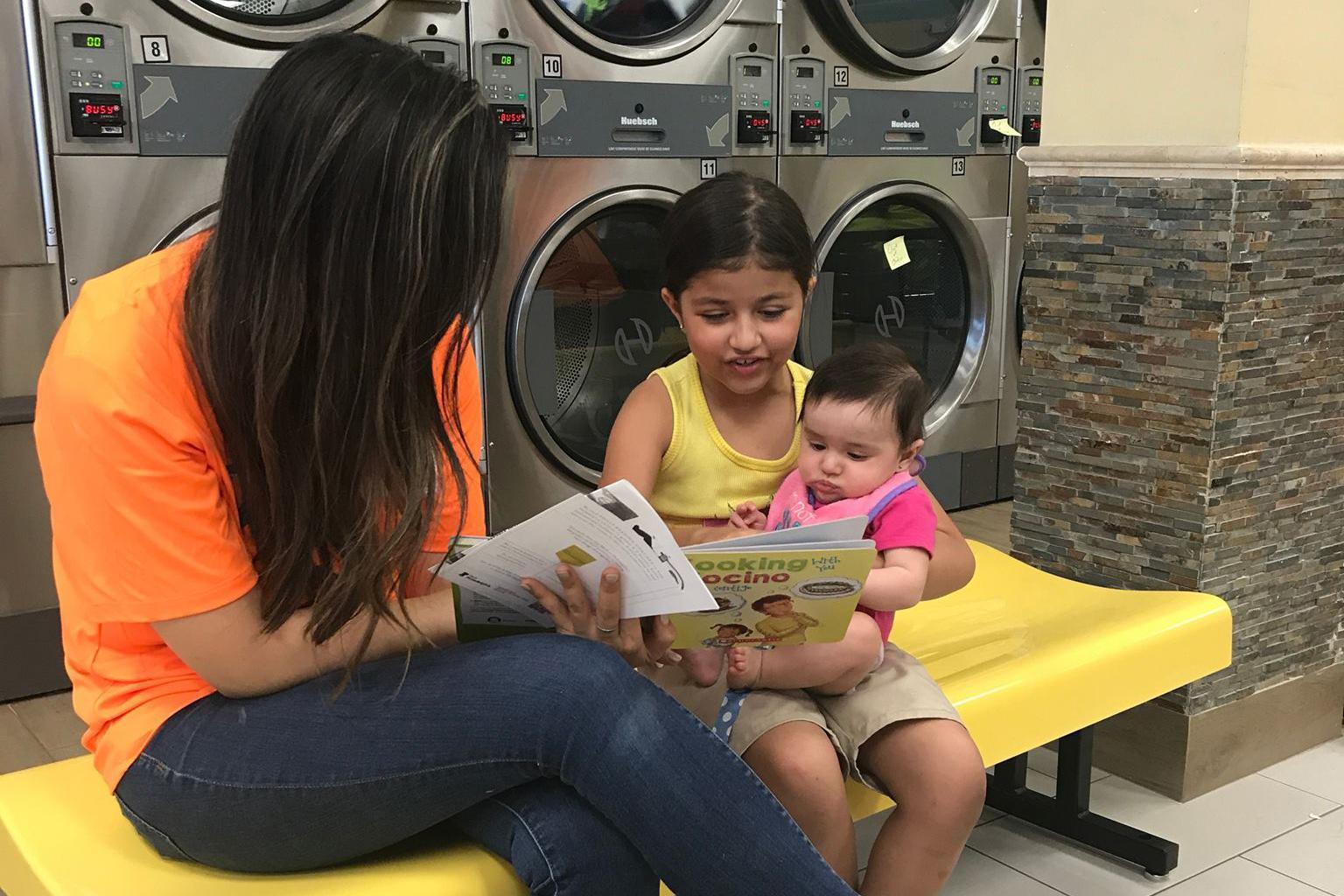 For anyone who has ever had to entertain a child while desperately counting down the minutes on a laundromat spin cycle, some relief might be on the horizon. A handful of laundromats in New York City and Chicago are experimenting with adding cozy reading nooks, books, art supplies, and puzzles. A project of the Clinton Foundation’s “Too Small to Fail” early childhood initiative, the program aims to promote early literacy, particularly in low-income areas where reading scores often lag behind those in wealthier neighborhoods. Initially, local libraries will send librarians to lead story times and encourage parents to use the spaces with their children while waiting for their laundry to finish.

Patti Miller, director of Too Small to Fail, told School Library Journal that the initiative aims to weave literacy into life’s ordinary activities.

The foundation is providing an initial donation but is working with the laundromat owners to transfer the expected costs of $1,500 to $2,000 in annual maintenance to them. —L.E. 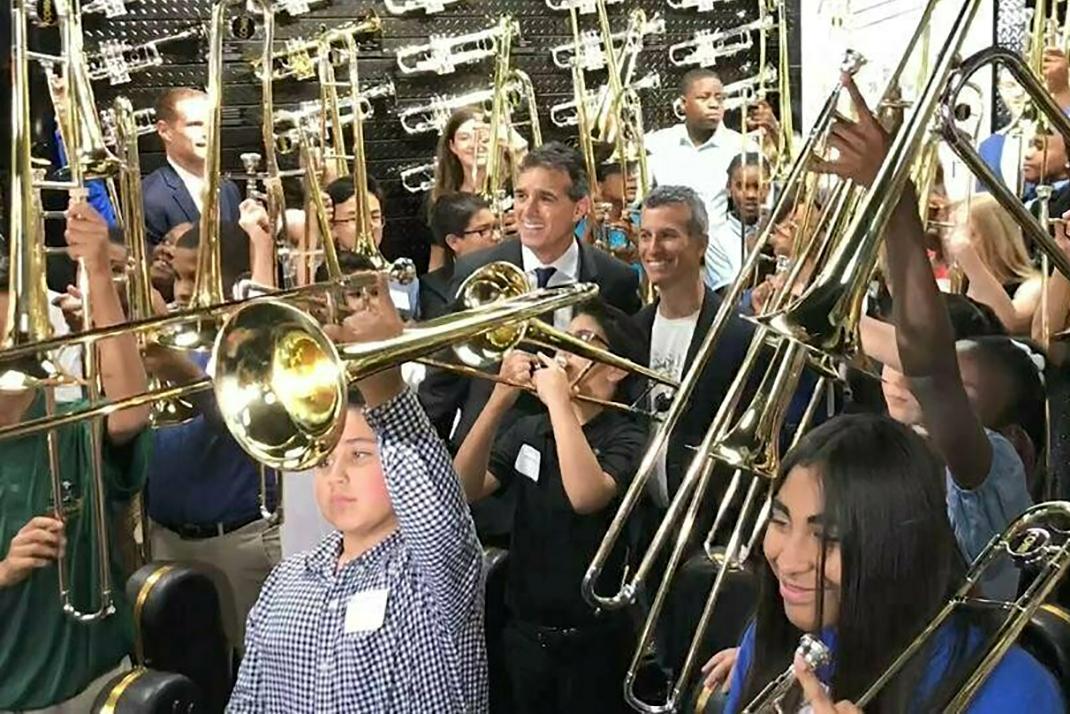 While it wasn’t a full 76 trombones like in the famous Broadway show The Music Man, 50 students received special instruments over the weekend in honor of a Florida teenager and trombone player who died in last year’s shooting at Marjory Stoneman Douglas High School in Parkland, Fla. South Florida–based All County Music and instrument manufacturer Conn-Selmer presented the trombones, engraved with a logo featuring the name of 14-year-old Parkland victim Alex Schachter, to 50 band students from 50 South Florida schools. School band directors nominated the students to receive an “Alex Tribute Trombone,” valued at $1,000 each.

“I’m blown away,” Alex’s father, Max Schachter, said at Saturday’s ceremony. “To see Alex affecting all of these kids [with] his love of music expanding all across the state ... it’s unbelievable.”

Schachter was one of 17 people killed on Feb. 14, 2018, when a gunman opened fire in the high school. Former student Nikolas Cruz remains in custody and is awaiting trial in the shooting. —L.E.

No question that the Love of Jesus changes hearts that are ready to accept Him, but we need to be careful of the Pollyanna mentality that simply looks for the "good" in everyone.  The Bible is clear that the heart of man is desparately wicked, and many, if not most have already rejected the Love of Christ.

As Paul said, "...rulers do not bear the sword for no reason. They are God's servants, agents of wrath to bring punishment on the wrongdoer." (Romans 13:4).  I can think of no more foolish approach to "security" than to promise a madman intent on doing harm that he can find hundreds of defenseless victims in supposed "gun-free" zones.

What kind of insane wishful-thinking does it take to belive that a sign will automatically keep guns from being brought into a school?  Metal detectors, "hardened" buildings, whatever, will not stop an armed killer.  Texas and Florida are clearly on the right track;  I'd far rather have my kids in a school with properly trained, cetified and armed teachers than one where the best advice is "duck and cover"!

Search for security - The approach is all wrong. Target hardening does not get to the root of the problem, which is hardened hearts.  We need to exercise the love of Jesus to reach and help change people who think violence is their only solution.

Perhaps improved protection in schools against terrorism both internal and external will be a combination of planned and unplanned approaches.

Comparing planned terrorist events with accidental events is not useful. Being watched it seems is really an act of love and not harm. It could lead to identifying students who need help or correction.