Two same-sex couples filed lawsuits this week against the U.S. State Department, arguing it unlawfully discriminated against them by denying their children U.S. citizenship.

The cases join a host of others involving reproductive technology and same-sex parenting working their way through the U.S. court system. Since the Supreme Court’s 2015 Obergefell decision declaring same-sex marriage a constitutional right, LGBT advocates have been pushing back against laws that uphold the biological reality that every child is the genetic offspring of just one man and one woman and that a biological connection carries weight.

A State Department policy about foreign-born children does just that by requiring that a child be biologically, not just legally, related to a U.S. citizen to gain citizenship.

That requirement posed a problem for Elad and Andrew Dvash-Banks, married in Canada in 2010. Elad is an Israeli citizen; Andrew is an American. In 2016, they hired a gestational surrogate in Canada to carry two embryos conceived from donor eggs and each of their sperm. In September 2016, the surrogate delivered two boys: Ethan, who is biologically related to Elad, and Aiden, who is biologically related to Andrew.

Shortly after the boys’ birth, the couple decided to move to Los Angeles. But when they brought the babies to the U.S. Consulate in Toronto to apply for passports, officials told them they needed to undergo DNA testing to determine the biological relationship of each boy to Andrew, the U.S. citizen.

State Department regulations allow a child born abroad to a U.S. citizen and an alien to attain citizenship only if the U.S. citizen is the “genetic or the gestational parent” of the child.

The couple submitted DNA test results, and soon after the State Department issued a passport to Aiden but not Ethan.

In the lawsuit filed on Monday, the couple argued the State Department unlawfully discriminated against them, and their toddler, because they were a same-sex couple.

“If a mother and father walk into a consulate and have a marriage certificate and birth certificate, they’re never asked any questions about the biology of the child,” said Aaron Morris, executive director of Immigration Equality, the LGBT immigrant advocacy group that filed both lawsuits. Morris and the Dvash-Bankses believe the State Department should treat the children of same-sex couples the same as the children of opposite-sex couples with no questions asked.

But that is asking the State Department to ignore biology, according to Peter Sprigg, a senior fellow for policy studies at the Family Research Council.

“The position of this couple, and this argument, seems to be that the law can and should redefine biological reality,” he said. Opposite-sex married couples are assumed to be the biological parents of their child because it is very likely the biological truth. But it is impossible for a child of a married same-sex couple to be biologically related to both parents.

The other case, filed in Washington, D.C., involves a married lesbian couple in London—one U.S. citizen and one Italian citizen—who have two children but only one related to the U.S. citizen. 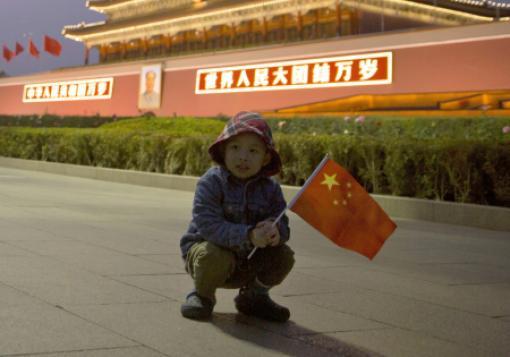 The Chinese birth rate fell last year, two years after the country withdrew its long-standing one-child policy and allowed Chinese couples to have up to two children.

Birth rates rose by 8 percent to 17.9 million children born in 2016. The increase seemed to indicate the success of the new policy: Half of the babies in 2016 were born to couples who already had one child. But the rate dropped in 2017 to 17.2 million births, according to a Chinese National Bureau of Statistics report released last Thursday.

The drop alarms Chinese authorities who are on a mission to increase the size of the country’s younger population to support its fast-growing number of elderly people. With almost 1.4 billion people, China has the world’s largest population but skews elderly, with more aging parents than children to care for them.

And it looks as if a two-child policy is not doing the trick.

One expert is not surprised. Steven W. Mosher, president of the Population Research Institute and author of Bully of Asia: Why China’s Dream Is the New Threat to World Order, testified before the Congressional-Executive Committee on China in 2015 that he didn’t expect the two-child amnesty to make a difference in the Chinese birth rate.

“Forty years of anti-natal, anti-child propaganda has left its mark on the Chinese psyche,” said Mosher. “Few Chinese young people, who are themselves only children—and often the children of only children—are inclined to be generous when it comes to having children of their own.”

“If the higher birth rate called for by China’s new Planned Birth policy cannot be achieved voluntarily, China’s leaders will inevitably use force,” said Mosher, who was the first American scholar allowed to do research in China in 1979 and first uncovered the practice of forced abortions and forced sterilizations to impose the one-child policy.

If they took brutal and invasive measures to limit childbearing, they will do the same to increase it, he told me: “Childbearing in China may well become mandatory. Regular pelvic examinations will be instituted to monitor menstrual cycles and plan pregnancies. Abortion may be forbidden.” But this is the very opposite of what Chinese leaders should do.

“They should abandon the Planned Birth policy altogether,” Mosher said. “They should allow couples to freely choose the number and spacing of their children, and have as many, or as few, as they desire.” —K.C. 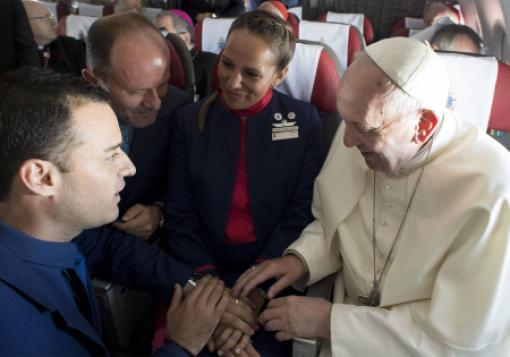 Pope Francis spontaneously performed an airborne wedding at 36,000 feet over Chile last week. After hearing two Catholic flight attendants had been married in a civil ceremony but were unable to have a church wedding due to an earthquake in 2010, the pope offered to perform the Roman Catholic sacrament on the plane. A Vatican official drew up the handwritten marriage certificate for Paula Podest and Carlos Ciuffardi, both LATAM Airlines crew members. The couple have two daughters, ages 6 and 3.

The decision drew criticism from some Catholic commentators, who argued the impromptu wedding could cheapen the church’s marriage preparation requirements. But the pope pushed back: “I judged they were prepared. They knew what they were doing.” Francis told reporters the couple had completed the church’s pre-wedding preparation course and gone to confession beforehand. The pope said he performed the ceremony in the hopes of encouraging other Catholics to get married in the church, something fewer and fewer of them are choosing to do.

“Sacraments are for people,” Francis said. “So why not do today what you can do today rather than put it off to tomorrow, when tomorrow might have turned into 10-20 years from now?” —K.C.

The percentage of teens who identify as atheists is double that of the U.S. adult population, according to a new comprehensive study on “Generation Z” by the Barna Group. Gen Z, also called the iGen, is made up of people born between 1999 and 2015.

Barna found 13 percent of U.S. 13- to 18-year-olds identify as atheists, compared to just 6 percent of all adults. Unlike previous generations—who have cited Christian hypocrisy—the biggest barrier to faith for Gen Z is the question of how a good God could allow evil and suffering in the world. —K.C.