Pundits and elected officials speculated about House Speaker Paul Ryan’s exit for months, and Wednesday he finally made it official. Ryan plans to serve out the remainder of his term as speaker and then retire from Congress to spend more time with his family.

Added to the resignation of Rep. Blake Farenthold, R-Texas, and the retirement of Rep. Dennis Ross, R-Fla., also announced Wednesday, Ryan’s decision leaves Republicans to defend 39 open House seats in November. Democrats will have to guard only 19.

Ryan earned deep respect from fiscal conservatives in 2010 when he proposed making radical changes to Medicare, Medicaid, and Social Security, where most government spending goes. After that year’s huge Tea Party sweep, Mitt Romney chose Ryan as his running mate on the GOP ticket for the 2012 presidential election. At the time, analysts considered Ryan unusually conservative for a presidential ticket.

Now, the once “risky” candidate is considered an “establishment” leader by supporters of President Donald Trump. Pundits are comparing this year’s political landscape to that of 2006—when Democrats dominated generic polls prior to the election and went on to win every open seat. (An average of recent polls found Democrats winning a generic ballot by a whopping 7 points.)

Earlier this month in Ryan’s home state of Wisconsin, a liberal judge defeated a conservative one for a seat on the state Supreme Court by 12 points—on the day of a snowstorm. That night, Republican Gov. Scott Walker warned of a “blue wave” in the state.

Political analyst Stuart Rothenberg predicted the House would flip before Ryan’s announcement, and this week’s news hasn’t changed his expectations.

“Right now, Democrats are united while Republicans are divided, between ‘establishment’ types and populist insurgents,” he said. “If the party is deeply divided when the midterms roll around in the fall, it could create a truly large Democratic wave.” 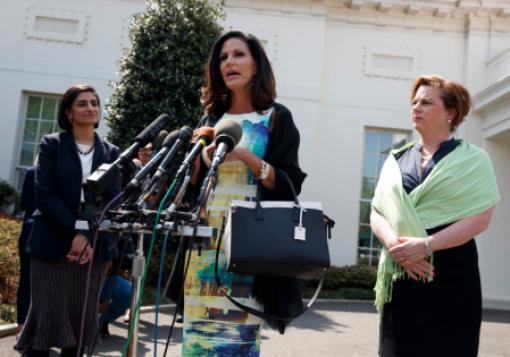 Penny Nance, CEO of Concerned Women for America, speaks with reporters outside the White House. Associated Press/Photo by Evan Vucci

President Donald Trump’s evangelical backers want to meet with him this summer—but not to address any recent scandals, according to most of the organizers of the meeting who have so far talked about the proposed gathering. The meeting date isn’t set, and the president hasn’t agreed to come. But after the year he’s had, just the idea of Trump sitting in a room with a bunch of pastors has caused a stir.

Last week, NPR quoted an anonymous organizer of the meeting who was concerned about the effect the president’s recent legal troubles might have on turnout in the midterm elections. Tony Perkins, director of the Family Research Council and a loyal Trump supporter, shot back on his blog, insisting the meeting would not address any scandalous accusations. It would instead pose a discussion on “what has happened on the shared issues of concern since January of last year.” Perkins recently told Politico that in his opinion, Trump could have a “mulligan” on an alleged affair with an adult film actress.

Penny Nance, leader of Concerned Women for America and a strong supporter of Trump, described the meeting as something like a pep rally.

“The point is to thank him for following through on every single one of his promises to conservative Christians … to encourage him to continue with all the judicial appointments,” she told me.

This is not the first time Trump’s evangelical supporters have gathered large numbers of pastors to meet with the president. In a show of support prior to the 2016 election, the same group invited pastors and other prominent evangelicals to a meeting with Trump in New York City.

So why ask 1,000 pastors to fly in from across the country to give the president a large, public “thank you,” rather than focus that time on Capitol Hill lobbying efforts?

“We’ll do both,” said Nance. “But you have to work in coordination with the White House. Congress has to get the message from both the other end of Pennsylvania Avenue and the grassroots. The president is a very strong ally with the grassroots on these issues.”

But that hasn’t translated into any legislative victories. Although the president’s party controls both chambers of Congress, lawmakers recently passed an omnibus spending bill that continues to fund abortion giant Planned Parenthood, prompting harsh criticism from conservatives and evangelical Christians.

Despite strong support for the president among Republican voters, party leaders are worried about the president’s future should the Democrats regain control of the House. Another meeting organizer told NPR that Trump’s evangelical backers would encourage pastors to push their congregations to vote in the midterm elections.

“The issue for the House is impeachment of the president,” Nance said. “If we support the president, we support his policies, we believe him to be the bodyguard for conservative Christians, then we need to support him.” Nance isn’t the only one bringing up impeachment. The New York Times recently reported on ways Republicans are using the idea as a campaign tool, a looming threat to motivate the base in a year when Trump is not on the ballot.

But many evangelicals still want the church to push back on Trump’s moral lapses. Conservative activist Bob Vander Plaats told The Washington Post that people of faith could cheer the president on for doing the right thing while still keeping him accountable—that they can “walk and chew gum at the same time.”

Trump’s approval rating among Republicans remains sky-high—85 percent in March. But his overall approval hovers at 41 percent. Historically, anything less than 40 percent spells trouble for a president’s party in midterm elections. —L.F. 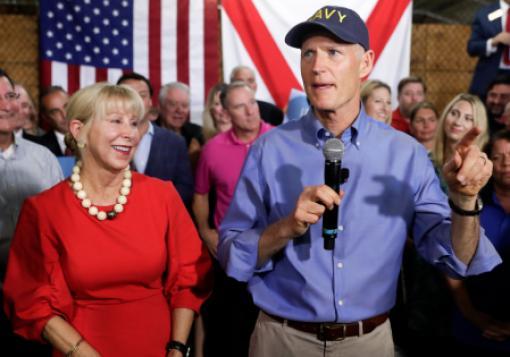 Penny Nance, CEO of Concerned Women for America, speaks with reporters outside the White House. Associated Press/Photo by Evan Vucci

Florida Gov. Rick Scott announced Monday he is running to unseat Democratic Sen. Bill Nelson in the Sunshine State. The race will be one of a handful of toss-up battles that could determine which party controls the U.S. Senate in the second half of President Donald Trump’s term. Scott, a Trump ally, has reached his term limit as governor. Florida went to Trump in the last presidential election, but President Barack Obama carried the state in the previous two elections. Nelson hasn’t had a serious opponent since winning his first term in 2000. Whether Scott’s close association with Trump will help or hurt his chances isn’t clear. So far, he hasn’t invoked the president’s name in interviews. When asked whether he would ask Trump to campaign for him, Scott told Fox News he has not talked to the president recently about the race. Gun violence likely will play a large role in the campaign after the Feb. 14 mass shooting at Marjory Stoneman Douglas High School in Parkland, Fla. Scott has an A-plus record with the National Rifle Association for supporting gun rights, but he recently signed a law raising the minimum age to purchase rifles to 21 and creating a new process enabling law-enforcement to seize guns from anyone considered dangerous. At a campaign kickoff event, Scott called for congressional term limits. “Washington is a disaster,” he said. “We shouldn’t be sending the same kind of people to Washington.” —Lynde Langdon

California Gov. Jerry Brown on Wednesday responded to President Donald Trump’s request for National Guard troops by promising to deploy 400 personnel to his state’s border with Mexico—but not to enforce federal immigration laws. Last week, the president asked the governors of border states for 4,000 National Guard troops to help fight drug trafficking and illegal immigration from Mexico. Texas, New Mexico, and Arizona committed about 1,600 soldiers, but their arrival at the border will take time. About 300 Texas guard members will report this week for preparation and training. In a letter to the Trump administration, Brown said the California troops would not be on “a mission to round up women and children or detain people escaping violence and seeking a better life.” Instead, they would work on combating drugs, firearms, and human trafficking. Former Presidents George W. Bush and Barack Obama both sent National Guard troops to the southern border to assist with apprehensions and drug seizures. Illegal border crossings have dropped dramatically since then. According to government statistics, U.S. Border Patrol agents apprehended just 303,916 immigrants in fiscal year 2017—the lowest number in 47 years. —L.L.

Sen. Tammy Duckworth, D-Ill., welcomed a baby girl Monday and became the first U.S. senator to give birth while in office. Duckworth, a U.S. Army veteran who lost her legs in the Iraq War, said she was grateful to friends and family and “our wonderful medical teams for everything they’ve done to help us in our decadeslong journey to complete our family.” Duckworth revealed earlier this year she went through several cycles of in-vitro fertilization before conceiving her second child. Her first daughter, Abigail, was born in 2014. Duckworth and her husband, Bryan Bowlsbey, married in 1993. Speaking at the Chicago Military Academy in January, Duckworth said she delayed having children to focus on her military career. Now mother to a newborn at age 50, she has asked the Senate to allow her to bring the baby into the chamber so she can still participate in votes. Accommodations for working mothers is becoming a more urgent topic for Congress as a record number of women campaign for seats in the House or Senate this year. —L.L.