At the Texas-Mexico border, illegal immigration leaves no one untouched

Items left behind at a border crossing near Eagle Pass, Texas Photo by Bonnie Pritchett

Twice a year, millions of monarch butterflies migrate through Eagle Pass, Texas, a city of about 30,000 residents on the U.S.-Mexico border. The rugged landscape comes alive with movement as the bright orange and black butterflies stop to rest on scraggly mesquite trees and tall reeds growing by the banks of the Rio Grande. They begin the Texas portion of their September-October journey in the northwestern city of Wichita Falls and fly 300 miles through the border town on their way to their winter home in central Mexico. They will head north in March. The insects inevitably collided with our windshield as WORLD’s Bonnie Pritchett and I made our way to South Texas to better understand another mass migration.

At one particularly busy border crossing on the edge of the Rio Grande, a large monarch alighted on a soggy mound of clothes and shoes. The butterfly opened its brilliant wings. Two hours earlier, the now-quiet crossing point was a frenzy of activity. About 200 immigrants climbed up the steep bank using worn footholds where thousands had crossed before them. They discarded their wet clothes and shoes for the dry ones they had carried across in plastic bags

The area resembles a landfill surrounded by river weeds. At 11:20 a.m., the warm September sun caused a musty smell to rise from the pile of abandoned items. There was a bright orange child’s life jacket, a pile of Cuban currency, and small, pink flip-flops coated in mud. Strewn throughout the clothing items were medicine bottles, phone chargers, and a baby bottle. A waterlogged New Testament dried in the sun, the Gideon logo barely visible on the dirty cover. Border Patrol cleaned the area in August—but now you can hardly see the ground. 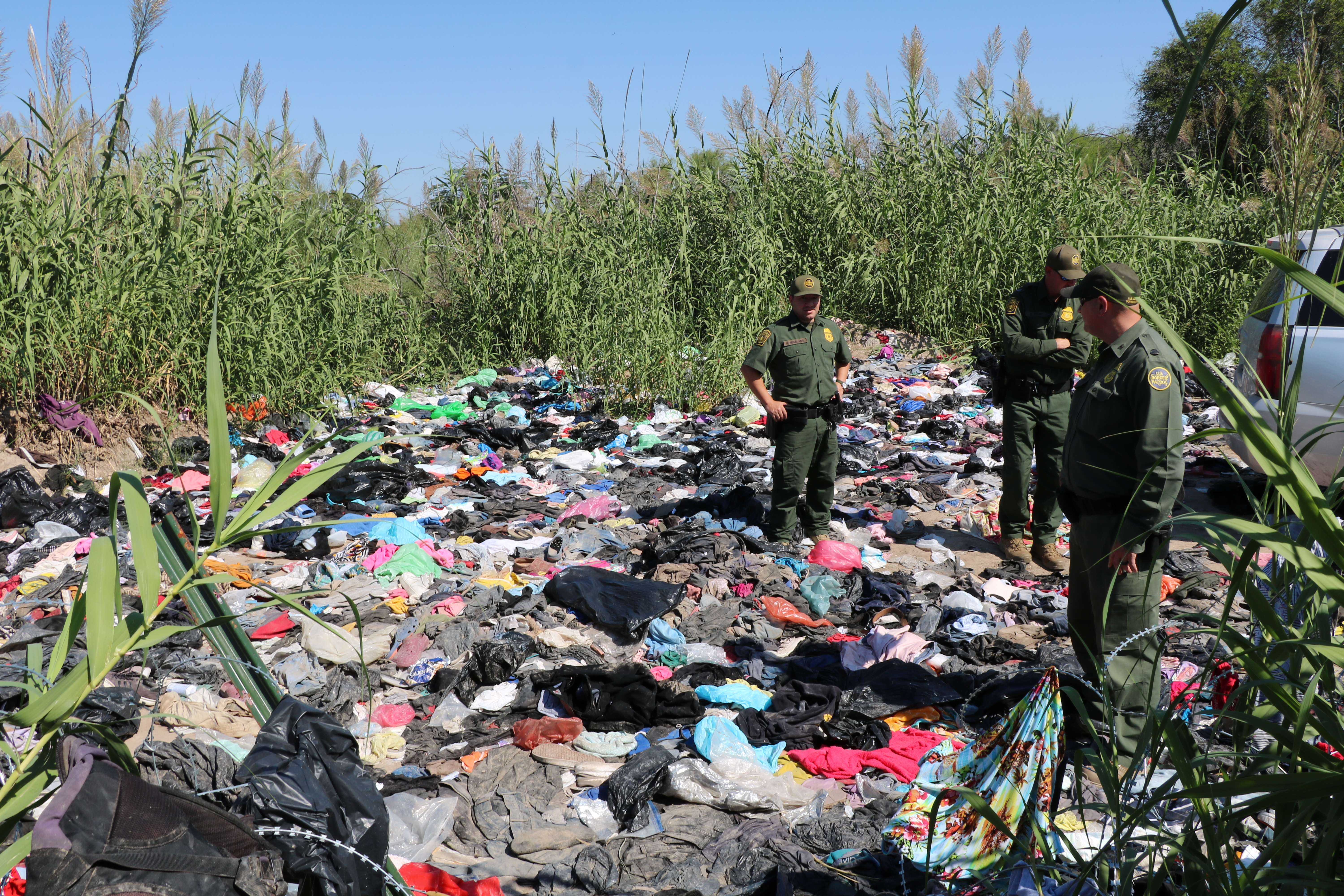 Two weather-beaten Border Patrol signs direct the immigrants toward the nearest highway with a green humanitarian cross and an arrow. That morning, they walked two miles on the dirt road, often up steep inclines covered in rounded flint rocks known as bull rock. According to Border Patrol, one immigrant passed out from a mix of exhaustion and the intense Texas sun that morning. In July, when temperatures soared, one agent carried an elderly woman on his back. When they arrived at the road, Border Patrol and Texas Department of Public Safety officers organized the travelers in lines according to age and nationality. They prioritized getting unaccompanied children and the elderly out of the elements. Then, the group was transported in white unmarked buses to a processing center.

It isn’t a rare occurrence. The Del Rio sector—a 245-mile stretch of border that includes Eagle Pass—is the busiest. The only thing separating Eagle Pass from Piedras Negras, Mexico, is the 100-yard-wide Rio Grande. The area averages about 1,500–2,000 illegal crossings per day, according to Del Rio Sector Border Patrol Chief Jason Owens. “It’s not a contest we would like to be winning,” he said. About 75 percent of the people who flow through the bustling center are single adults. Sixty percent of those are men. Twenty-five percent are families or unaccompanied children. 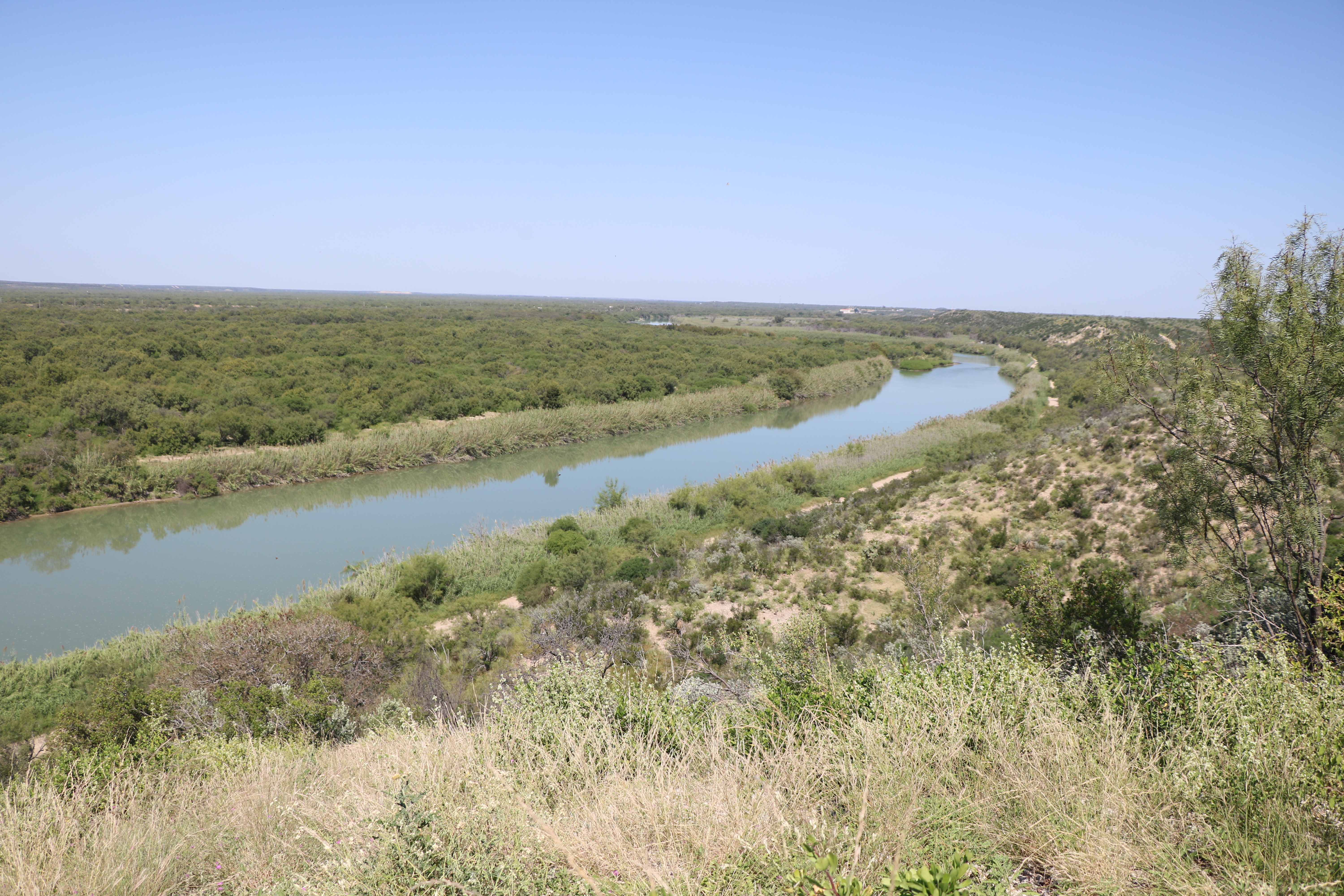 During the fiscal year that ended on Sept. 30, U.S. immigration authorities arrested over 2 million immigrants. The surge is taking its toll on the small community. Bonnie and I spent four days—not nearly enough time—investigating that toll. We asked landowners, pastors and ministries, local law enforcement and Border Patrol, and Christian business owners: What does it look like to do effective compassion at the border? How do we love the illegal immigrant while enforcing the law? How should Christians care for the immigrants and the overtaxed communities who receive them?

We spoke with ranchers who spend hours patching cut fences, chasing down cattle, and cleaning their land of the debris left behind. Cattle broker Martin Wall has spent $117,000 on fence repairs. We walked his land as the sinking sun turned the sky a dusty rose. He showed us a “layup”—a makeshift campsite under a few mesquite trees—where immigrants crossing his 1,000-acre ranch know to stop. He winced at the dirty shoes and torn blankets left behind.

Three generations of his family leased the property and the 1874 ranch house for decades. The original hardwood flooring creaks as you walk down the narrow hallways. Wall purchased the land on May 20, 2020. That night, his wife shook him awake. A small group of immigrants was in their kitchen. They never used to lock their doors. Now his 10-year-old son doesn’t leave the house without a guard dog.

The Union Pacific Railroad slices his property in half. Wall sees the train injuries, the evidence of rape and smuggling, the children shoved in train cars. “The kids? No you’re not calloused to them. But everything else? You get pretty calloused to it,” he said. “I don’t like having a calloused heart, you know, to be cold like that. But after a while, you get tired of it.”

He isn’t the only one who is exhausted. Local law enforcement officers are stretched thin. “We are not trained to be immigration officers … the last couple of years we’ve been … given the task of immigration,” Eagle Pass Police Chief Federico Garza told us. “So you mix both of them, and of course, it’s going to have a big stretch on our resources.” He is confident in the resiliency of his community, but like other border residents, he is skeptical that Washington has the will for anything more than short-term stopgaps. “There’s just too much fighting among our leaders that sometimes we don’t get anything done. And we got to suffer for years.”

On our last day, we toured the Border Patrol processing facility, a large white tent erected in July to handle the growing influx. Then we stopped at the city’s one immigrant shelter, Mission: Border Hope, the first stop for immigrants released from Immigration and Customs Enforcement custody. Director Valeria Wheeler feeds the migrants and helps them find transportation to another city. In the neighboring border city of Del Rio, the Val Verde Humanitarian Border Coalition serves a similar purpose. At Mission: Border Hope, we spoke with immigrants about to leave for a city they knew little about. We heard their stories of what they had escaped and could see the relief etched on faces that looked years older than the ages they told us.

We drove back to our Airbnb in thoughtful silence, first stopping to pick up fish tacos and a fajita plate from Taco Bliss Express. It is one of the many small Tex-Mex restaurants scattered through the borderlands. Almost everyone we spoke with has ties to Mexico. Migration has always been a part of life—but nothing like this. Still, residents are determined to stay and keep fighting for a solution. “This is home. This is family,” said Wall. He can’t imagine walking away.

Bonnie and I will dig even deeper into these stories and those of the many others we shadowed as they go about their lives in the midst of a crisis with no end in sight. Check wng.org for more coverage in the coming weeks.