Refugees fear what Myanmar will do if they go home

The failed return of Rohingya Muslims to Myanmar has led to international groups calling for improved conditions in the refugees’ home country.

Bangladesh last week canceled plans to begin repatriating some of the 720,000 Rohingya who fled a military crackdown in neighboring Myanmar, also known as Burma, last year. Thousands of refugees protested the move, while dozens of others fled to avoid being sent back. One refugee, Nabi Hossain, said he left the Unchiprang refugee camp in Bangladesh with his wife and six other family members last week ahead of the repatriation.

“If they allow us to have our rights, our citizenship, we want to go,” Hossain said. “But if we are forced, if our rights are not given, it is better to crush us under the wheels of cars or be thrown in a river.” He and his family returned to the camp when they heard about the protests.

Bangladeshi Refugee Commissioner Abul Kalam said the planned repatriation was canceled because none of the refugees were willing to return. Myanmar and Bangladesh both agreed in an October meeting to return the first group of about 2,000 refugees on Nov. 15.

The migration into Bangladesh began in August 2017 after a Rohingya militant group targeted some Myanmar security posts in Rakhine state. Security forces responded with a crackdown on the Rohingya that the United Nations later called a genocide.

Myanmar said it was prepared to welcome back refugees, but some rights advocates worry little has changed in the country. Robert Mardini, a UN observer with the International Committee of the Red Cross, said because of ongoing violence in Rakhine state and how many villages have been destroyed there, “We still believe that the conditions are not right for voluntary, safe, dignified returns.”

Just last week, Myanmar immigration authorities detained 106 Rohingya as they tried to flee by boat to Malaysia. Human Rights Watch said in a statement the Myanmar government has neither addressed the root causes of the crisis nor made an effort to ensure the refugees’ safe return.

“Bangladesh needs to uphold its international obligations—and maintain its well-earned international reputation for providing refuge to the Rohingya—and not grab at quick and easy solutions that will once again put desperate people at risk,” said Bill Frelick, the group’s refugee crisis director.

Kalam told Reuters the next Rohingya repatriation likely will not take place until 2019 because Bangladesh was preparing for elections in December. In the meantime, he said the Myanmar government needed to propose a clearer path to citizenship for the Rohingya before any of them should return. 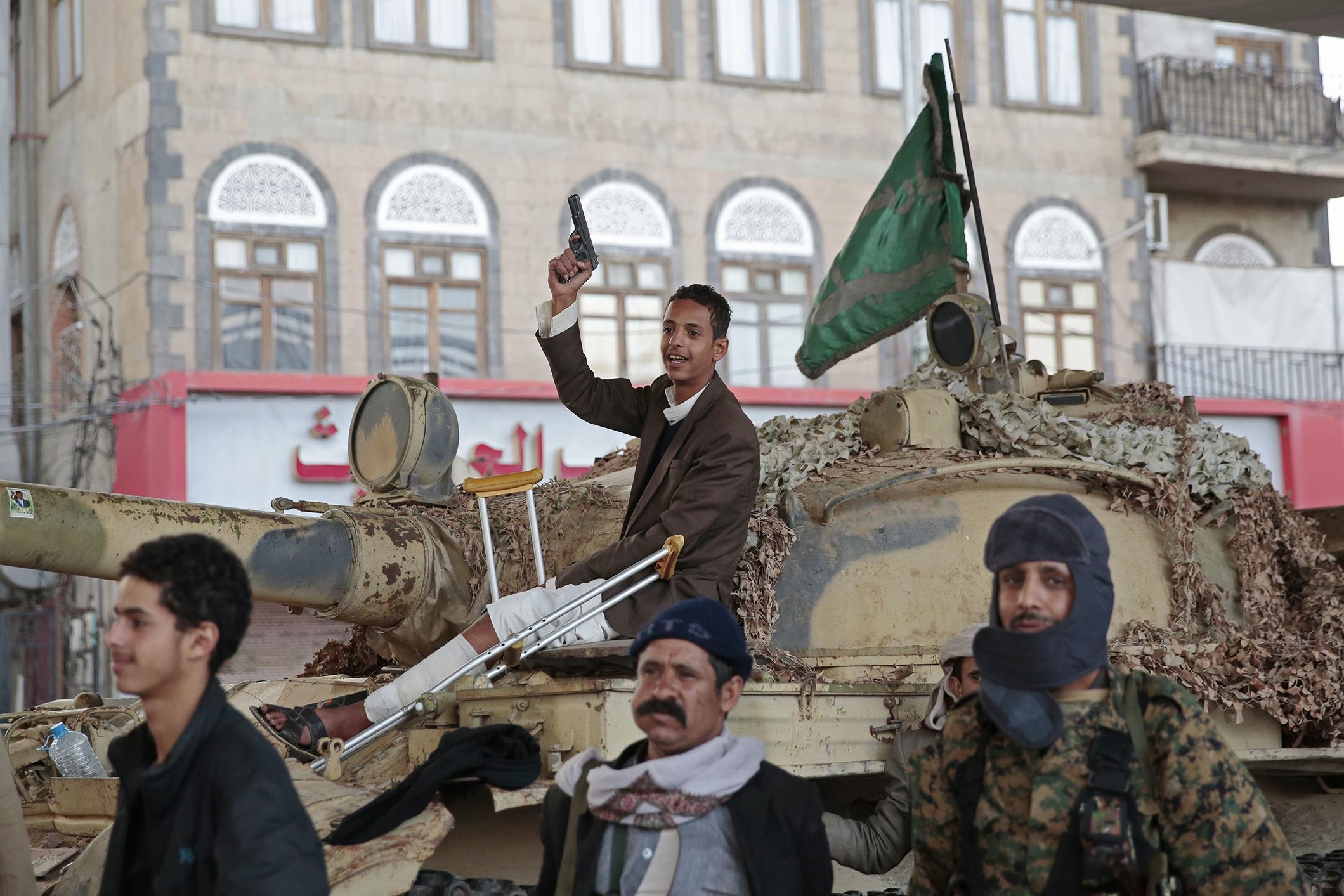 As the United States has increased the use of drones to stop al-Qaeda extremists from terrorizing Yemen, at least a third of those killed in the country this year were civilians.

The United States backs its Arab allies in Yemen against al-Qaeda in the Arabian Peninsula (AQAP), the group’s Yemeni affiliate, with weapons and logistics. The drone strikes limit the group’s movement and use of cellphone services but have also resulted in accidental deaths among civilians.

According to the Associated Press and the Bureau of Investigative Journalism, the Trump administration carried out 176 strikes during its nearly two years of leadership. The groups recorded 154 strikes during the Obama administration’s eight years in office. Airstrikes this year killed about 88 people, with at least 30 not belonging to AQAP. One drone attack this year killed 14-year-old Yahia al-Hassbi as he tended goats several miles from a checkpoint al-Qaeda recently tried to capture. One other person also died in the strike.

Civilian casualties also increased as the United States targeted senior al-Qaeda members. U.S. raids killed at least 66 civilians, 31 of them children, in two attacks in 2009 and 2017 targeting Qassim al-Rimi, one of the group’s founders.

The war between the Saudi-led coalition and Iran-backed Houthi rebels in Yemen has killed more than 57,000 civilians, though multiple warring militias in the country make it more difficult to confirm the casualties. —O.O. 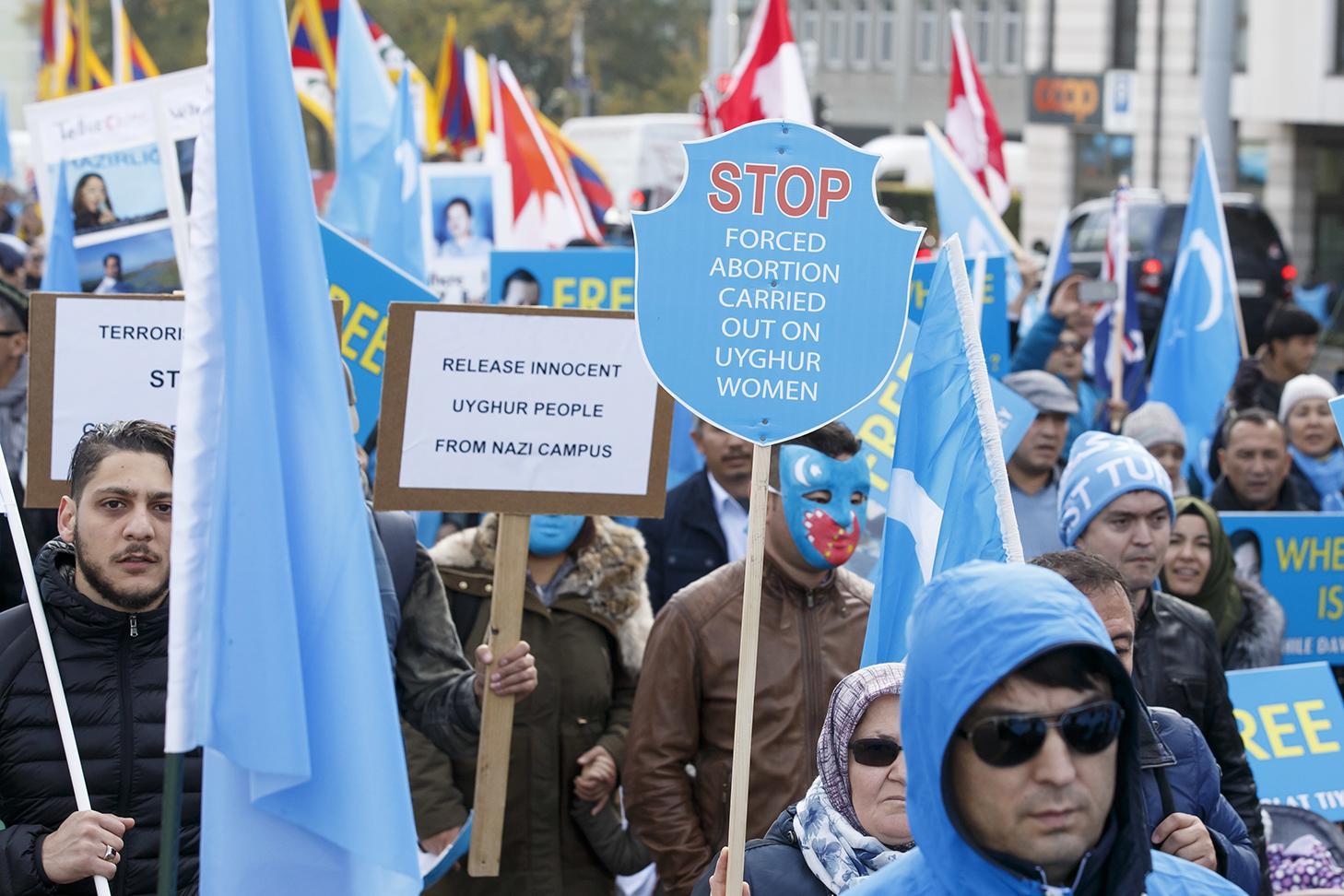 Lawmakers in the U.S. Congress are taking action against the “staggering evil” of China’s forced detention and reeducation of Uighur, or Uyghur, Muslims.

Smith said in a statement that the internment of more than 1 million Muslims “should be treated by the international community as a crime against humanity.” Co-sponsor Rep. Thomas Suozzi, D-N.Y., also condemned the “brutal, religious-based persecution.”

Uighur human rights groups praised the “powerful step” and hoped to see the legislation adopted, according to Radio Free Asia. Business Insider reported that Chinese officials lashed out at the lawmakers’ “incomprehensible sense of superiority” and said they should return to domestic affairs. —Julia A. Seymour 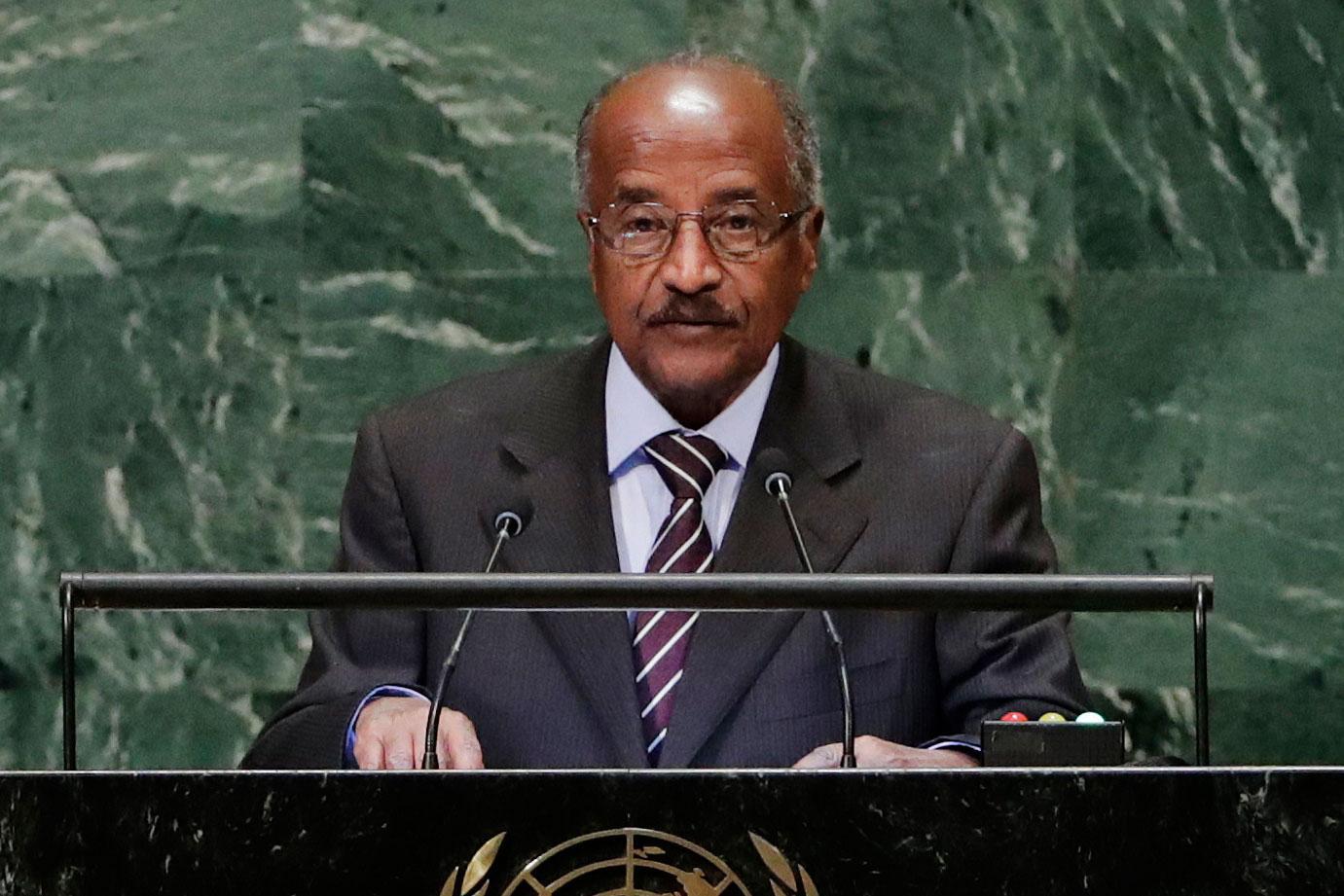 The United Nations Security Council voted last week to lift targeted sanctions imposed on Eritrea nearly a decade ago as relations improve between the nation and its neighbors.

The UN imposed an arms embargo and other sanctions on the country in 2009 after experts concluded it supported Islamic terror group al-Shabaab and other armed militants in Somalia. Eritrea denied the accusations. The resolution to lift the sanctions lauded the “efforts toward peace, stability, and reconciliation in the region.”

Eritrea and Ethiopia ended nearly two decades of war and renewed relations in July, including reopening commercial flights between the countries and appointing ambassadors. In September, Eritrea and Djibouti agreed to begin reconciliatory efforts after deadly clashes erupted in 2008 when Djibouti accused Eritrea of moving its troops across the border.

Eritrea’s Chargé d’Affaires Amanuel Giorgio welcomed the resolution as a “long overdue call for justice.” But the country will likely continue to face other international restrictions over needed human rights reforms.

Eritrea has not held any elections since gaining independence in 1993 and still lacks a constitution and independent judiciary. —O.O 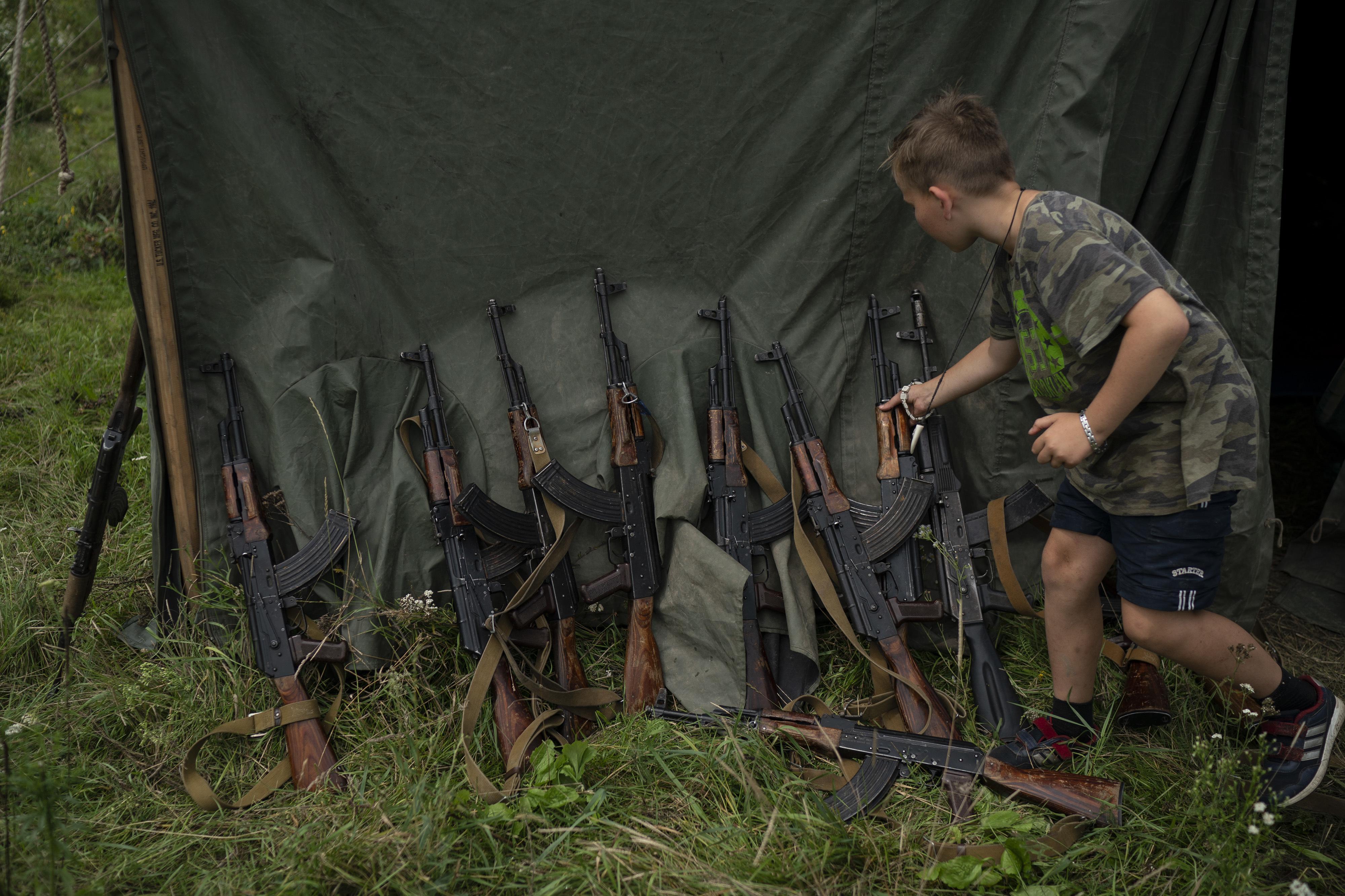 A political party in Ukraine is actively training children to promote nationalism and defend their country from Russia. The youth wing of the radical Svoboda party leads the “Temper of Will” summer camp in a forest in western Ukraine.

The campers, mostly teenagers but some as young as 8, don camouflage clothing and carry assault rifles. Lessons focus on nationalism and rejecting cultural movements like acceptance of same-sex marriage and transgenderism, which the instructors say can “completely destroy” European civilization.

One of the instructors, Yuri Cherkashin, told the children they never aim guns at people. “But we don’t count separatists, little green men, occupiers from Moscow as people,” he said. “So we can and should aim at them.”

Ukrainian nationalists have faced accusations of violence and racism, but their voluntary support in the fight against Russia has allowed them to maintain ties with the government. —O.O.