A large white shipping container sits on the edge of a nondescript field in Eagle Pass, Texas. The smell of stinkweed hangs in the air. The scene is quiet except for the hum of the generator that battles the Texas heat to cool the five bodies stored inside. The doors are bolted shut.

Maverick County Deputy Denise Cantu helped deliver the fourth body to this temporary resting place. Cantu, 28, has worked in law enforcement for six years, but she’s lived in Eagle Pass all her life. She is used to the demands of her role as an officer of the law, but she isn’t used to seeing death in her community on a daily basis.

The five bodies are migrants who drowned in the Rio Grande. More than 850 immigrants died at the southern border during the fiscal year that ended Sept. 30—a record high. Hundreds have perished from exhaustion or dehydration in remote borderland deserts or smuggled in the back of vehicles. In June, 53 migrants died locked in the back of a sweltering tractor-trailer in San Antonio. The river has claimed many others.

The humanitarian crisis is taking a toll on law enforcement. Local police and sheriff’s departments are stretched thin. Police officers and Border Patrol agents handle death on a weekly basis and struggle to leave their experiences in the field. But in the midst of tragedy, borderland communities are rallying around their first responders.

Cantu witnessed tragedy firsthand at a popular crossing point under the incoming port of entry bridge that connects Piedras Negras, Mexico, with Eagle Pass. Piles of belongings are scattered on the banks: discarded IDs, shoes, clothing. “It was a mom and two little girls,” Cantu recalled as she looked across the water. “A 4- and 2-year-old. But she could only carry one.” The mother gripped the 4-year-old by the hand. But the current was stronger. Cantu watched as the medics tried to revive her. “It was already too late,” she said.

Eagle Pass, a small city of about 30,000, is home to some of the most dangerous crossing points and has become the focal point of the illegal immigration surge. Immigrants underestimate the Rio Grande. In Mexico, it is known by a different name, the Rio Bravo: fierce, wild, agitated. The river flows peacefully on the surface, but the strong currents rush underneath. Heavy rains make the swollen river even more treacherous. On Sept. 3, eight immigrants were swept away in one day.

Maverick County Sheriff Tom Schmerber used to serve with the Border Patrol. “I never thought that me as the sheriff was going to be doing immigration work again. That’s what we’re doing,” he said.  Schmerber wears jeans and a straw cowboy hat and carries a gold-accented pistol in a brown leather holster on his hip. Pictures of his German and Mexican ancestors hang on the wall.

“Now we have all these people that are dying,” said Schmerber. Because the sheriff’s department has countywide jurisdiction, he is responsible for the bodies. They find one or two every day. Maverick County isn’t equipped for death on this scale. The county doesn’t have a coroner, and local funeral homes don’t want to take responsibility. A local funeral home helps transport the body to the refrigerated shipping container. Schmerber works with the Mexican consulate to get them back to their families. The department fingerprints the bodies and checks their tattoos. When WORLD’s Bonnie Pritchett and I spoke with Schmerber, they had five bodies in the storage container: three from Mexico, one from Honduras, and one that was unidentified. If the remains cannot be identified, the body is driven 132 miles to the medical examiner’s office in Webb County. Chief Medical Examiner Dr. Corrine Stern says she is running out of space. 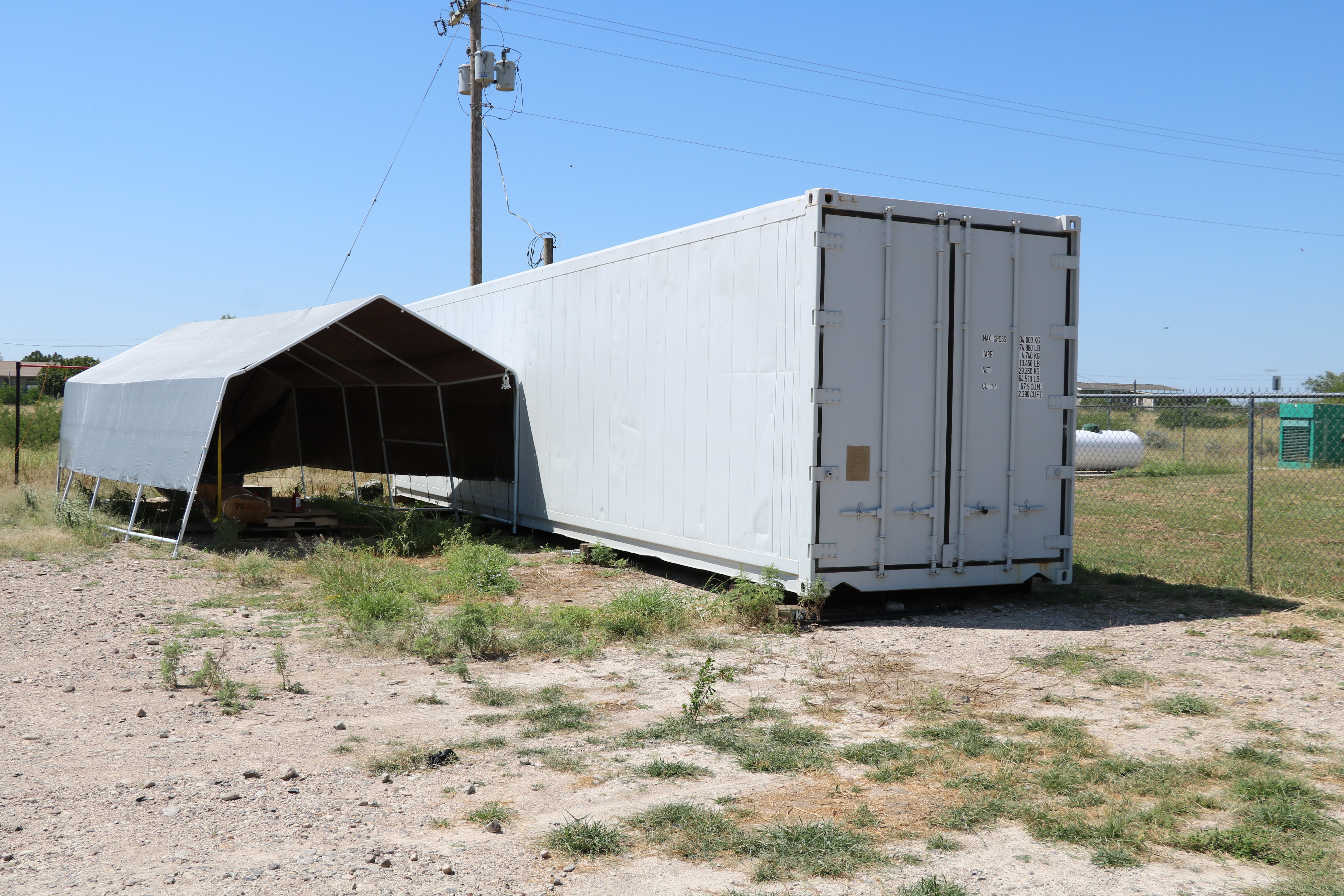 Schmerber worries about his deputies. “They see this every day,” he said, “The deputies are human beings. … They also have feelings. It affects everybody.”

The Eagle Pass police chief shares his concerns. Federico Garza Jr. says immigration shouldn’t fall under the police department. His officers get calls from residents who find immigrants in their backyards who are asking for money. “The citizens here are very compassionate,” he said, but, “Eagle Pass is not used to this.” An officer waits with the individual on site until Border Patrol officers arrive, taking up time that the officer can’t be out on patrol.

A grant from Texas Gov. Abbott’s border security initiative, Operation Lone Star, helps Garza pay overtime. “But the problem becomes … working the same workhorse all the time,” he said. It isn’t the drownings or trespassing or the trash littering the river banks that distresses his officers the most. It’s seeing immigrants wandering the streets of Eagle Pass at night, lost and alone. “They see them walking all over the place … with very little help,” he said. They can’t help them all. The police department has a job to do: protect the community of Eagle Pass. Their resources are limited.

Garza wonders if things will ever change. “There’s just too much infighting among our leaders that sometimes we don’t get anything done. And we have suffered for years,” He said.  He thinks the federal government should secure the border, but he doesn’t want it to look like a war zone. He wants better technology, not chain-link fences and razor wire.

A Texas National Guard soldier, Spc. Bishop Evans, drowned trying to rescue an immigrant woman on April 22. The woman survived. It took three days for Border Patrol and state troopers to find his body. Flowers and small American flags attached to a pole near the river crossing form a makeshift memorial.

“Everything about the situation concerns me. I’m concerned for the well-being of the immigrants that are in the hands of criminals. I’ve seen people die. … That keeps me up at night,” said chief patrol agent Jason Owens. “And then the things that my men and women had to see when they’re trying to rescue these folks. And sometimes they can’t always be successful. That bothers me.” Owens is the Border Patrol chief for the Del Rio Sector, an area that stretches 242 miles along the border and spans 47 counties. He leads about 2,000 agents and staff.

The surge of illegal asylum seekers has changed their job. “The humanitarian crisis that we’re experiencing at the border comes at a cost in many different ways,” he said. Immigrants who cross between ports of entry put themselves into the hands of criminals and smugglers and often risk their lives. Patrol agents are forced to take on a humanitarian role. They perform search-and-rescues and process hundreds of immigrants every day. “And when we’re doing that, we can’t be out on patrol doing the border security mission,” said Owens.

During the fiscal year that ended on Sept. 30, U.S. immigration authorities arrested about 475,000 people crossing the border illegally into the Del Rio Sector. They know of at least 160,000 more that got away.

Illegal crossers who are determined to be “nonthreatening” are processed at a facility in Eagle Pass—nicknamed the Firefly Softsation. Border Patrol erected the orderly maze of large white tents in July to handle the growing influx. Of the 316 staff at the center, 140 are Border Patrol agents. The rest are contracted workers who keep the tents running smoothly 24 hours a day. Officers from other Department of Homeland Security agencies volunteer to spend 30 days at a time away from home to help cook meals, catalog belongings, and stock the tables with snacks: chips, apples, breakfast bars, water bottles. “I still argue that we don’t have enough,” said Owens.

His agents are also overwhelmed emotionally. The boat patrol team sometimes recovers small children from the river. He said agents have done CPR on infants, and have seen entire groups swept away. “And every day going home to their families, waking up the next morning, putting the uniform on again, and continuing to show up day in and day out,” Owens said.

He is concerned about burnout.“There is no break … There is no light at the end of the tunnel. That’s what it means to be overwhelmed emotionally,” he said. 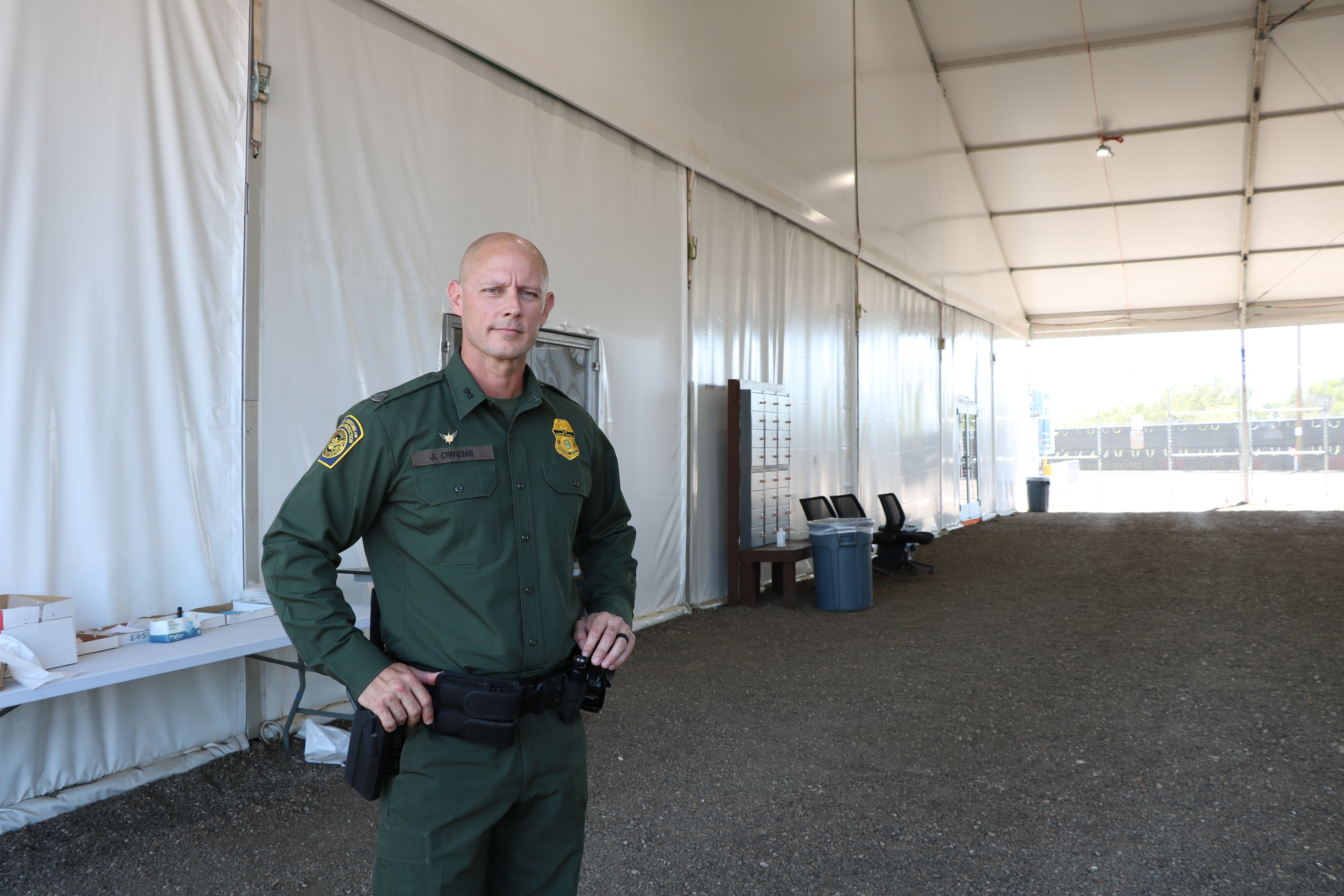 Owens has served with Border Patrol for 26 years. Long shifts mean his agents miss out on time with family and their kids’ school events. He wants the American people to see their dedication: the diaper changing and formula mixing, the toys they bring from home for the immigrant children.

Amid scathing social media critique and backlash, he is thankful for community support in Eagle Pass and neighboring Del Rio. “We couldn’t do our jobs without them there beside us,” he said. Border Patrol works alongside local charities, law enforcement, city leaders, and businesses. “It’s everybody that has a stake in what’s going on here, coming together, finding a mutual understanding, and trying to get through as best we can,” said Owens.

After Border Patrol hands the immigrants over to U.S. Immigration and Customs Enforcement, they are transported to Mission: Border Hope in Eagle Pass or the Val Verde Humanitarian Border Coalition 55 miles west in Del Rio. Shon Young is president of the coalition and the associate pastor at City Church in Del Rio.

He says it isn’t just the immigrant who needs care. In 2021, 15,000 Haitian immigrants crowded under a bridge in Del Rio. Border Patrol asked local churches to help feed them. He saw law enforcement bringing their own items and handing out diapers to families in need. When World Central Kitchen arrived to take over, the church focused its attention on the Border Patrol agents and Texas Department of Safety officers. They handed out Chick-fil-A sandwiches, pallets of sports drinks, and care packages.

A few Texas Department of Public Safety officers and Border Patrol agents attend City Church. The church regularly hosts barbecues for the agents at each local Border Patrol station. They hand out care packages filled with snacks they can keep in their vehicles and grab quickly: a pack of gum, a bag of nuts, beef jerky, and other odds and ends. “We want to let them know that the church cares and loves them and is here for them through their tough times,” said Young.