University disciplines faculty member who refused to call a Mr. a ‘Miss’

A Shawnee State University philosophy professor filed a lawsuit against the Portsmouth, Ohio, school on Nov. 5 for disciplining him because he insisted on using the courtesy title that corresponded to a student’s biological sex.

Nicholas Meriwether, a 22-year tenured faculty member, uses courtesy titles like “Mr.” and “Miss” with students’ last names to create a respectful Socratic dialogue in his classes. But his belief that God created humans immutably male or female puts that practice at odds with the Shawnee State nondiscrimination policy, which demands employees affirm a person’s preferred gender.

The case could force publicly funded schools to reassess their LGBT nondiscrimination policies, said Meriwether’s attorney, Travis Barham with Alliance Defending Freedom. “Public universities have no business compelling people to express views they do not hold,” Barham told me. “That’s the message of this case.”

A disciplinary letter placed in Meriwether’s personnel file in June claimed he created a “hostile environment” in his political philosophy class by refusing to address a male student, Alena Bruening, as female. Meriwether suggested to the student and school administrators that he refer to Bruening by first or last name only, with no gender-specific prefix. According to the lawsuit, Bruening took offense at the offer and lashed out with an obscenity. Bruening filed two discrimination complaints and threatened to have the professor fired.

Meriwether claims in a federal lawsuit that administrators violated his free speech, his religious liberty, and his employment contract by demanding he submit to the university’s identity politics. The lawsuit claims Shawnee State showed animus toward Meriwether’s religious beliefs as early as 2016. As the university was drafting the LGBT nondiscrimination policy, Meriwether warned administrators it would conflict with employees’ speech rights and religious liberty. A department chairwoman allegedly told him that religion “oppresses students,” and an administrator said forcing faculty to use objectionable speech “had no bearing” on a professor’s “academic freedom or free speech rights,” according to the lawsuit.

The lawsuit also states that during a meeting about the discrimination complaint this spring, a Shawnee State administrator openly laughed when a union representative described Meriwether’s religious beliefs.

“A philosophy classroom is where you are supposed to be able to debate all issues but particularly the issues of ‘What is the essence of human nature?’” Barham told me. “Not being able to discuss that or forcing professors to endorse ideological viewpoints on those issues that they don’t hold, that’s a threat to free speech and to academic freedom.”

“It’s not just a matter of courtesy when the state mandates it,” said Pearcey, who is also director of Houston Baptist’s Center for Christian Worldview. “Essentially the state is saying, ‘You must use certain words.’”

With Meriwether’s lawsuit, Pearcey believes American teachers have someone championing their rights. “I think this case is really heartening because what it shows is a few people are fighting back,” she said.

Barham said recent U.S. Supreme Court decisions favor Meriwether’s cause. By siding with California pro-life pregnancy centers in NIFLA v. Becerra in June, the high court reaffirmed the constitutional prohibition against compelled speech. And the court’s decision this summer in favor of Christian baker Jack Phillips, who declined to make a custom cake for a same-sex wedding, showed the justices do not look kindly on hostility toward religion. 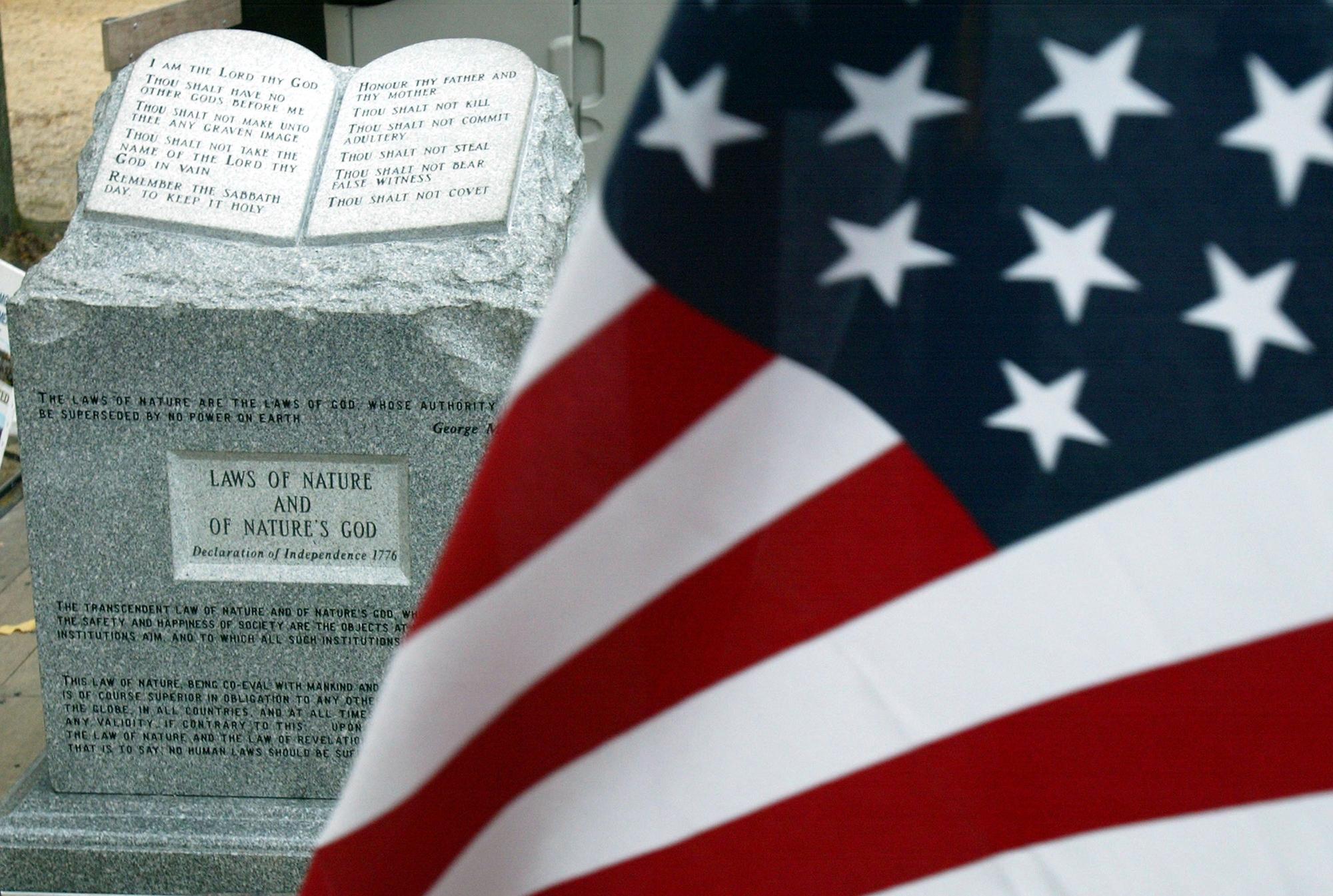 A whopping 72 percent of Alabama voters last week approved a constitutional amendment to allow the Ten Commandments to be displayed on state property. But with a history of judicial confusion and controversy, it was not a straightforward win. The American Civil Liberties Union said the amendment would not save the government from inevitable legal battles over future Biblical displays.

Alabama has fought a long, hard battle over Ten Commandments monuments. In 2003, then–Chief Justice of Alabama Roy Moore went around and around with the ACLU over a display of the commandments he had installed in the Alabama Judicial Building rotunda. The Alabama Court of the Judiciary removed Moore from office for defying a federal court order to take down the monument. He appealed to the U.S. Supreme Court, which ultimately declined to hear his case. Moore was elected chief justice again in 2012 and was removed from office in 2016 for directing state judges not to implement right away the Supreme Court’s decision to allow same-sex marriage.

When it comes to public displays of the Ten Commandments, the Supreme Court has proved dodgy. It has at times ruled in favor of Ten Commandment monuments, but only narrowly. At other times, it has specifically ruled against the displays or declined to hear appeals, letting lower court rulings against the monuments stand. This happened most recently last year, when the high court turned down a request to hear a New Mexico Ten Commandments case, City of Bloomfield v. Felix. The uncertainty has led to lower court confusion on the issue. The new Alabama law may force the justices to finally lay down a broad ruling on the topic. —Rachel Lynn Aldrich

An Islamic community center in Troy, Mich., filed a lawsuit Thursday claiming the city unfairly blocked it from constructing a new building. The Michigan chapter of the Council on American-Islamic Relations filed the suit on the center’s behalf.

The Adam Community Center, a nonprofit organization, sued the Troy City Council, the Troy Planning Commission, and members of the city’s Zoning Board of Appeals, claiming that they unfairly applied zoning restrictions to keep the group from building on a new site that would include spaces for prayer.

Five months earlier, the Troy Zoning Board of Appeals told representatives from the center that there was no place in the city where they could build, causing the U.S. Department of Justice to investigate the board’s practices. City officials maintained they were justified in their decision because the building would require so many zoning variances. There have been at least two other similar cases in Detroit municipalities in the last two years.

The use of zoning codes to obstruct the building of houses of worship became so problematic two decades ago, Congress enacted the Religious Land Use and Institutionalized Persons Act (RLUIPA) in 2000 by unanimous consent. The law prohibits land use regulations that impose a substantial burden on religious exercise without a compelling justification. This summer, the Justice Department announced it was stepping up enforcement of RLUIPA through its Place to Worship Initiative. —R.L.A.

Professor fights pronoun mandate = This sure smells like a set up by the student and possibly some in the administration to make this professor an example, to frighten all the other teachers to get in line with the administrations desires. I applaud professor Meriwether for fighting back.  You know what, in the USA you are free to call yourself anything you want, but you are not free to force the rest of us to go along with your delusion.

Religion helps control our base impulses.  Culturally, we are moving towards legislating against any opposition to their pursuit and fulfilment.