The Catholic Church reels from yet another abuse crisis

Cardinal Donald Wuerl, archbishop of Washington, D.C., during Easter Mass in 2011 at the Basilica of the National Shrine of the Immaculate Conception Roman Catholic Church Associated Press/Photo by Alex Brandon

Catholics around the world are calling for an independent investigation into sexual abuse by the U.S. Catholic hierarchy after a grand jury report released this week detailed horrific allegations against priests in Pennsylvania. The 18-month investigation revealed more than 300 “predator priests” raped and molested more than 1,000 child victims, all identified from hidden church records. Those numbers are likely understated due to destroyed records and silent victims.

The report, released Tuesday, included the findings of investigations in six of the eight Pennsylvania dioceses going back to the 1940s and is the most comprehensive report on abuse and systematic cover-up within the Catholic Church in the United States to date. It follows earlier investigations into the state’s other two dioceses.

“Pennsylvanians can finally learn the extent of sexual abuse in these dioceses,” Pennsylvania Attorney General Josh Shapiro said during a Tuesday news conference. “The abuse scarred every diocese. The cover-up was sophisticated. The church protected the institution at all costs.”

Parts of the 884-page published report were redacted due to ongoing legal battles with accused individuals who want to conceal their identities. The Pennsylvania Supreme Court will hear oral arguments over the redactions on Sept. 26. “You can be certain we will fight vigorously to remove every redaction and tell every story of abuse and expose every cover-up,” Shapiro said.

The Vatican on Thursday expressed “shame and sorrow” over the report, calling the crimes it described “criminally and morally reprehensible.” But what action the Catholic Church will take in response to the report remains to be seen.

At a “Mass of Forgiveness” Friday in Harrisburg, Pa., Bishop Ronald Gainer read aloud from the report’s introduction and said he had “profound remorse,” offering a “heartfelt apology” to the victims. The grand jury report criticized Gainer for failing to advocate the defrocking of an abusive priest. The diocese insists Gainer worked to get that priest and another abusive priest out of the church swiftly after Gainer became bishop in 2014.

Many church members are demanding the resignation of Cardinal Donald Wuerl, currently the archbishop of Washington, D.C., who served as the bishop of Pittsburgh from 1988 to 2006. Wuerl, who was named 169 times in the report, wrote a letter to priests in his diocese Monday defending his record and claiming he demonstrated “zero tolerance” for sexual abuse.

But the report tells otherwise. In one of many examples, the jury found accusations reported to the Pittsburgh Diocese against the Rev. George Zirwas going back to 1987, many of them while Wuerl was bishop. Despite specific allegations by parents and victims of groping and molesting, Zirwas was repeatedly reassigned to new parishes until 1995. He was also part of a ring of priests who exchanged victims among themselves, manufactured child pornography, and “used whips, violence, and sadism in raping their victims,” according to the report. In 1996, after Zirwas was put on a “leave of absence” and had moved to Cuba, he wrote the diocese, claiming he knew of priests involved in illegal sexual activity and asked for an increase in his monthly stipend in exchange for the information. Wuerl wrote back, telling him to either produce a list of the priests involved or renounce his claims. Zirwas recanted, and his monthly stipend increased. After Zirwas was murdered in his Havana apartment in 2001, Wuerl presided over his funeral.

The grand jury report recommends Pennsylvania eliminate its statute of limitations for the crimes. Right now, almost every instance of abuse in the report is too old to be prosecuted. It also calls for allowing older victims to sue for damages, imposing penalties for failing to report child abuse, and specifying that past or present confidentiality agreements (used by the church to silence victims for years) do not prevent a victim from talking to the police.

The Pennsylvania report came on the heels of the resignation of the Washington archbishop before Wuerl, Cardinal Theodore McCarrick. Investigations found McCarrick sexually abused seminarians and young priests and molested a boy starting when the boy was age 13 and continuing for almost 20 years.

On Thursday, the president of the U.S. Conference of Catholic Bishops, Cardinal Daniel DiNardo, announced a plan to deal with he called a “moral catastrophe” in the church, including an investigation into the McCarrick scandal, better reporting channels for victims, and a better process to resolve complaints.

But DiNardo’s suggestions will be “a ritual of reputation-laundering,” unless the Vatican agrees to a full investigation under canon law, according to Matthew Schmitz, editor of conservative Catholic journal First Things.

“Remember: The cover-up of sex abuse will take the form of grand gestures of transparency and serious-sounding but toothless ‘investigations,’” he tweeted on Thursday. “In fact, it already has. A whitewash for the sepulchres.”

Schmitz said the only way forward is a forensic look at the Catholic hierarchy: “That means accountants, lawyers, and investigators reviewing documents and taking depositions.”

Albert Mohler, president of the Southern Baptist Theological Seminary and a WORLD News Group board member, said in his podcast The Briefing the investigation should take an even larger step back to see the whole picture.

“Explanations of the scandal and its persistence must at least deal with certain questions of Roman Catholic theology,” said Mohler, noting canon law, priestly life, and the magisterial authority claimed by the church. 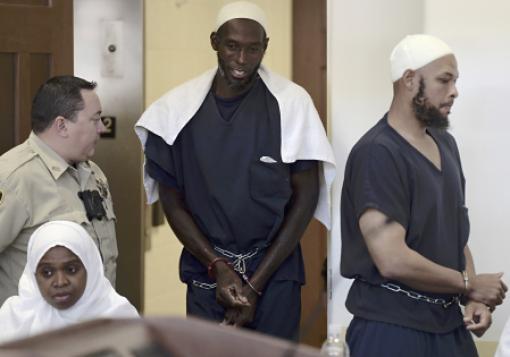 A New Mexico judge is facing death threats this week after allowing the release of defendants arrested on a remote New Mexico compound and charged with child abuse. In a pre-trial ruling Monday evening, New Nexico District Judge Sarah Backus set a $20,000 bond for four of the five defendants and ordered they wear ankle monitors.

On Aug. 3, authorities arrested five adults and took 11 hungry and dehydrated children into custody during a raid on a filthy and armed compound near the Colorado border.

Prosecutors on Monday argued the group should remain behind bars, citing evidence they were training children to use firearms in violent public attacks, but Backus said there was not enough proof for her to keep them in jail.

A Taos County Courthouse official on Tuesday said Backus had received violent threats via social media, email, and phone, including one caller who threatened to slit the judge’s throat. Law enforcement put the courthouse on lockdown Tuesday afternoon.

Siraj Ibn Wahhaj, son of a well-known New York imam, will stay in custody due to an arrest warrant in Georgia, where he is accused of abducting his 4-year-old son in December. The child remains missing. Officials found the remains of a boy on the compound last week, but medical examiners have not yet identified the body.

On Tuesday, authorities said defendant Jany Leveille, reportedly the mother of six of the 11 children found on the compound, had been transferred to the custody of federal immigration authorities. Leveille, a native of Haiti, has been in the United States for 20 years after overstaying her nonimmigrant visitor visa.

Defendents Lucas Morton, Subhannah Wahhaj, and Hujrah Wahhaj could be released as early as Friday. —K.C.

A third gender in Germany

Germany’s Cabinet on Wednesday approved a third gender category—“diverse”—for birth certificates. The decision followed a November 2017 ruling by the Federal Constitutional Court declaring German laws must either have an option for biologically intersex individuals to register as neither male nor female or scrap gender designation altogether.

Though narrowly applied to those with biological gender ambiguity—a medical diagnosis with an ever-widening definition—the law will likely lead to gender self-determination for all. Case in point: German Family Affairs Minister Franziska Giffey this week celebrated the Cabinet ruling and said the next step would be updating the legal standing of transgender individuals by barring medical examination to determine biological sex, according to Agence France-Presse. —K.C.

Embattled Chicago-area Willow Creek Community Church paid $3.25 million to settle lawsuits over a church volunteer who sexually abused two disabled children, according to a Chicago Tribune article published this week. Court documents show the church made two payments, one last year and one in February. Despite the payments, the church has denied accusations of negligence. The perpetrator pleaded guilty to separate counts in 2013 and 2014 and is serving a seven-year prison sentence for the abuse.