Catholics pray at an underground church in Hebei province in China in April 2017. Getty Images/Photo by Kevin Frayer (file)

WASHINGTON—A group of civic and religious leaders are lobbying one of America’s top law firms to stop representing foreign governments known for their persecution of people for their religious beliefs.

Forty-four civil and faith leaders co-signed a letter asking Squire Patton Boggs, a lobbying powerhouse based in the nation’s capital, to cease its work on behalf of countries such as China, Qatar, and Saudi Arabia. Open Doors ranks Saudi Arabia as the 15th worst country in the world for religious persecution, followed by China at No. 27 and Qatar at No. 38.

Squire Patton Boggs has more than 47 offices in 20 countries and nearly 1,500 lawyers. Its clients have included the governments of Cameroon, China, Qatar, Saudi Arabia, the Palestinian Authority, Myanmar (also known as Burma), and Sudan.

At a news conference on Friday, Bob Fu, director of U.S.-based China Aid, listed off the names of missing or detained Christians and asked the firm to consider the kinds of acts China had perpetrated against them. “Don’t be embedded with evil when they are practicing such horrific crimes against humanity,” he said. “That’s what I want to ask the leaders of Squire Patton Boggs to do.”

Former U.S. Rep. Frank Wolf, R-Va., noted that “there are many good people in this law firm” and urged them to reconsider their clientele, adding, “The world must speak out that no law firm must represent a country that is taking Uighur Muslim children and women and putting them in internment camps modeled after what Mao and Stalin did.”

The letter also accuses Saudi Arabia of systematically oppressing minority religions, including the exportation of textbooks overseas that promote intolerant views of other beliefs. In April, officials beheaded 37 Saudi nationals, the majority of whom were Shiite Muslims, in a mass execution. Shiites make up about 15 percent of the Saudi population.

The letter to the law firm also charges that Qatar has promoted religious persecution through its relationships with terrorist groups such as the Taliban and Islamic State (ISIS).

Squire Patton Boggs has faced scrutiny for its clientele before. In 2017, actor George Clooney and human rights activist John Prendergast penned an op-ed in Time magazine calling out the law firm for representing Sudan. The northeast African nation paid the firm $40,000 per month to lobby the U.S. government to permanently lift sanctions the country had incurred for its relationship with terrorist organizations and its human rights atrocities. The law firm only ended its relationship with Sudan last year, Faith McDonnell with the Institute on Religion and Democracy noted at Friday’s news conference. It also unclear whether Squire Patton Boggs stopped representing Sudan due to increased public scrutiny or because it fulfilled its contract obligations. Squire Patton Boggs did not return a request for comment for this report. 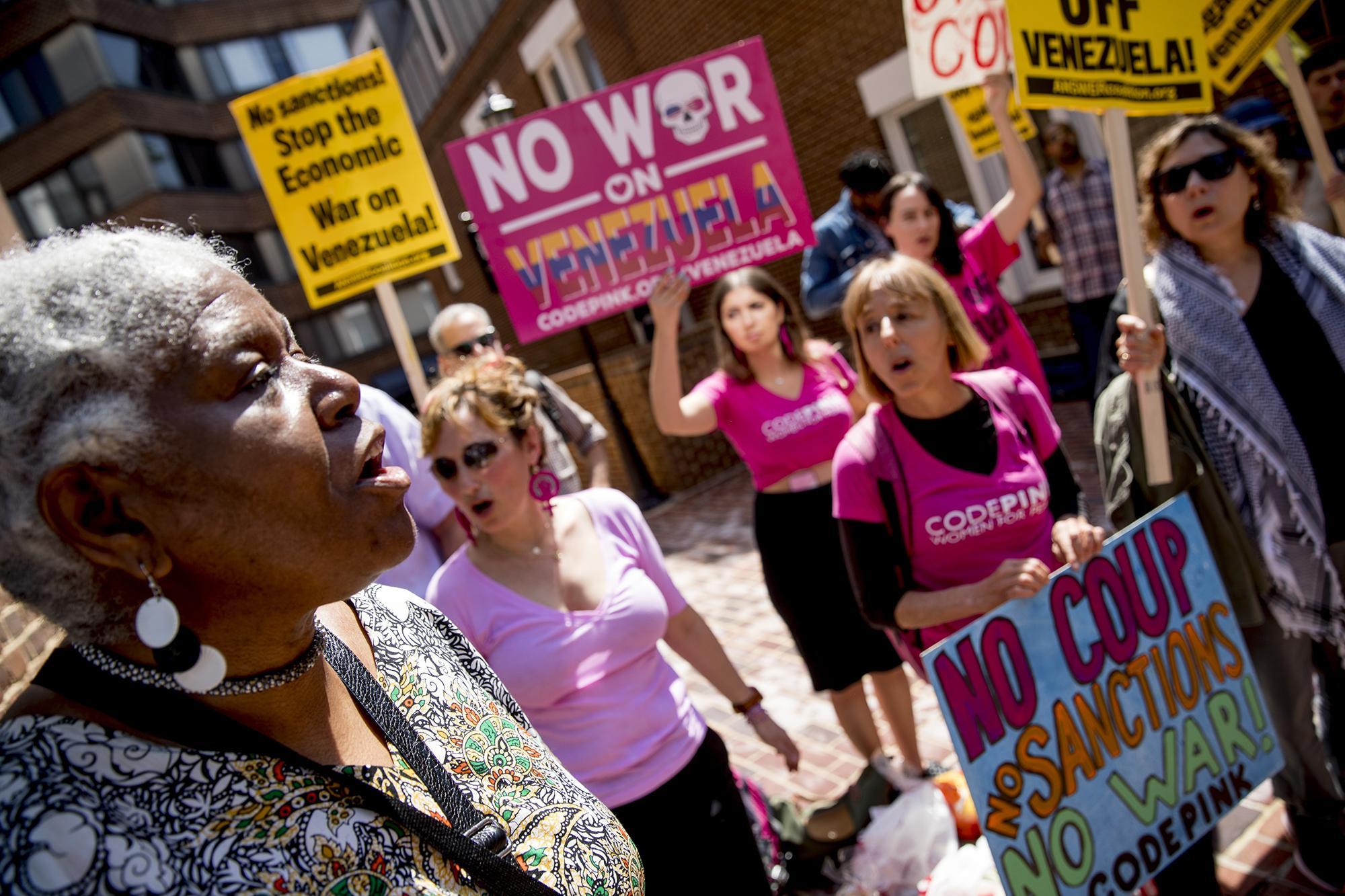 A group of about 50 American activists has occupied the Venezuelan Embassy in Washington to block Venezuelans siding with interim President Juan Guaidó from taking control of it.

The pro-communist, anti-war organization Code Pink organized the activists, which moved into the building May 2 with the support of the embattled Venezuelan socialist leader President Nicolás Maduro. The activists received key cards and passcodes for the building from pro-Maduro officials, CNN reported. Maduro’s diplomats exited the embassy as the situation in Venezuela became more tense.

Code Pink protesters have accused the United States of backing a “coup” in the South American country and vowed to stay in the embassy until Maduro’s regime is recognized, Fox News reported.

In January, Guaidó, then head of the National Assembly, became interim president after he invoked a clause in the Venezuelan Constitution. He and others contend that Maduro rigged his reelection in May 2018. The United States and more than 50 countries have recognized Guaidó’s claim to the presidency, while Russia, China, and Cuba have continued to support Maduro.

Pro-Guaidó Venezuelans have begun counterprotests around the embassy, demanding that the Americans exit the building. They also attempted to block Code Pink and pro-communist activists from delivering food and supplies to those inside.

“We’re doing our part from wherever we are around the world to bring light into the Venezuelan plight. And there’s invaders in our embassy that are not Venezuelans,” one Venezuelan, Cynthia Cortes, told CNN. “This is the Venezuelan people for Venezuelan democracy; this is not about right or left in the world. I hope and I beg that people don’t use my country and the suffering of my people for their own personal flags that have nothing to do with what’s going on.”

In a statement Thursday, a U.S. State Department spokesperson called for the activists to leave and said any unauthorized individuals on the property were trespassers. —H.P. 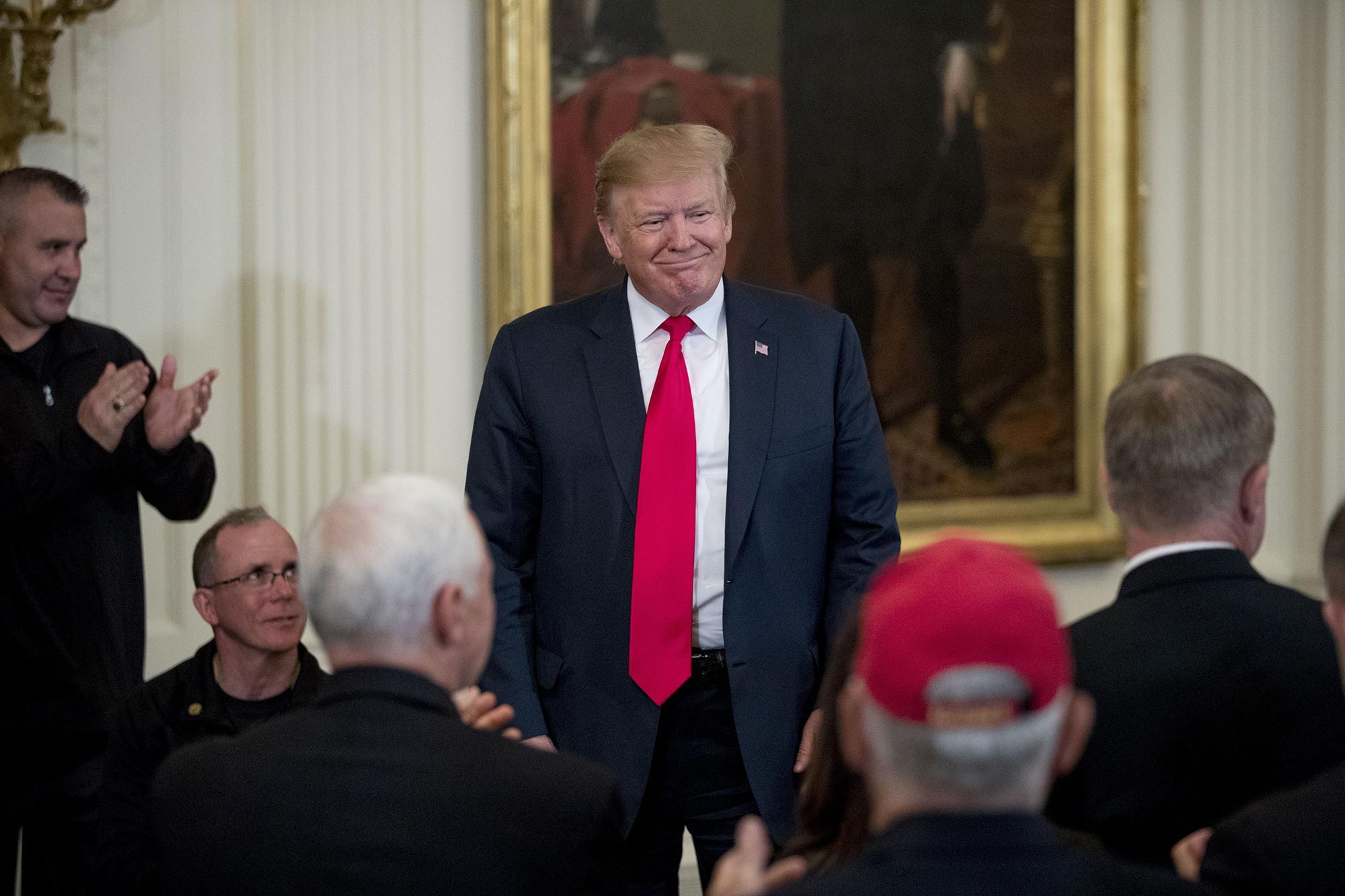 President Donald Trump’s job approval rating hit an all-time high of 46 percent in a Gallup tracking poll at the end of April amid a strong economy and an initially positive spin on special counsel Robert Mueller’s report by the president’s advisers, the polling group noted.

The April 17-30 survey found a jump in the president’s approval from 39 percent in early March to 45 percent in early April. Gallup said the surge in approval coincided with strong economic growth, low unemployment, and gains in the stock market. The polling period also included Trump’s claims that the Mueller report vindicated him and ended before potentially damaging claims emerged that Mueller had questioned Attorney General William Barr’s handling of the report.

Looking ahead to the 2020 presidential election, Gallup said the poll illustrates the importance of the economy and the effect that the ongoing fallout from the Mueller investigation could have on Trump’s reelection chances.

More than 90 percent of Republicans approve of Trump, but he also saw an increase among Democrats, with 12 percent approving of the job he is doing as president.

Despite the polling uptick, Trump’s approval rating has stayed within a relatively narrow range, well below the highest approval ratings of his predecessors. He still faces strong opposition, with 50 percent of respondents expressing disapproval of his job performance.

The survey of 1,024 adults is part of periodic multiday polls that Gallup has conducted since Harry Truman’s presidency and has a margin of error of plus or minus 4 percentage points. —Anne K. Walters

President Donald Trump granted a full pardon Monday to former Army 1st Lt. Michael Behenna, who had been convicted of unpremeditated murder in the death of an Iraqi prisoner.

A military court convicted Behenna in the 2008 slaying of Ali Mansur Mohamed, a possible al-Qaeda operative suspected of planning an attack that killed several members of Behenna’s platoon. The Oklahoma native was sentenced to 25 years in military prison, but concerns surrounded the handling of the trial, including whether evidence that could have exonerated Behenna was kept from his lawyers.

The U.S. Army appellate court expressed concerns about how Behenna’s claims that he acted in self-defense were handled. A judge later reduced his sentence, and he was released on parole in 2014 after five years.

Behenna has admitted that he stripped Mansur and interrogated him without military authorization after investigators did not find enough evidence to hold him in the attack on U.S. troops. He claimed that Mansur was trying to attack him when he shot him. Trump pointed to questions about the trial as well as broad support for Behenna among former military officers and elected officials as reasons for granting the pardon.

Microsoft announced Monday the upcoming release of new software that would enable individual vote tracking to heighten voter confidence in the integrity of the U.S. election system.

Russian hackers targeted more than 21 states’ voting systems in the 2016 U.S. presidential election. U.S. security officials fully expect the Russians or other foreign agents to try again in 2020, though there is no evidence that any of the attempts successfully tampered with any votes or final tallies in the last presidential election.

Microsoft’s program, ElectionGuard, would give each voter a unique, encrypted code that would follow the vote all the way through the system until it was counted. It would also give election officials and third parties another way to verify results.

The company plans to release the software free of charge for election technology providers to incorporate into their systems.

Microsoft partnered with computer science company Galois as well as the largest voting machine vender in the country, Election Systems & Software, to build and promote the technology. The software will also work with systems that use paper ballots.

A Microsoft official told NPR that the company expects to see a pilot form used in the upcoming 2020 presidential election and that broad use of technology could begin as soon as 2024. —H.P.