WASHINGTON—Twitter announced last week it will no longer overlook tweets from government officials that violate the platform’s policies, a shift from a past, laissez-faire attitude that overlooked offending messages in the interest of newsworthiness.

The announcement on June 27 explained the social media service will now limit the reach of tweets deemed offensive and hide them behind a warning message that users have to click past to see the original posting.

The new labels only apply to verified accounts of government officials or those running for office with more than 100,000 followers.

Twitter said it will consider whether hiding a tweet will block a “unique context or perspective not available elsewhere that is necessary to a broader discussion,” as well as take into account the “immediacy and severity of potential harm” caused by a message. Flagged tweets will not show up on user timelines, making it far less likely they will be seen. A Twitter representative confirmed to RealClearPolitics that all decisions regarding flagged tweets will be final with no appeal.

This is one of Twitter’s first attempts to regulate what has previously been a digital Wild West that allowed candidates, government officials, and heads of state to disseminate their messages directly to the public.

The service has long been under fire for not banning President Donald Trump’s tweets in particular. Critics have accused the president of frequently violating the platform’s rules against harassment, bullying, and threats of violence. Previously, Twitter defended its hands-off policy toward offending tweets from high-profile figures, arguing it served the public interest to allow them to remain visible.

Some have expressed concern that the policy change will be used to discriminate against conservative voices. Republicans have long accused Twitter of suppressing conservative points of view and applying its policies inconsistently. Earlier this year, Sen. Ted Cruz, R-Texas, argued in a hearing that big tech companies like Twitter have demonstrated a “consistent pattern of political bias and censorship.”

Evidence of censorship against conservatives is mostly anecdotal. The pro-life movie Unplanned had its Twitter account briefly shut down, and the service pulled an ad posted by Sen. Marsha Blackburn, R-Tenn., during her 2018 campaign. Cruz and other lawmakers, including Sen. Josh Hawley, R-Mo., have proposed various solutions, such as amending previous legislation to make it easier to sue tech companies for censorship. Others have pushed back on such proposals, arguing that government attempts to police Big Tech violate free market principles.

“I think conservatives will read this, perhaps rightly, as an attack on Trump and his conduct on the platform,” said Zach Graves with the Lincoln Network, a libertarian-leaning think tank. He said it may feed into an idea that social media platforms are “taking deliberate steps” to favor liberal points of view.

“I think it’s very hard to apply those kinds of things to the president, who naturally operates in a kind of exception from the norm,” Graves said. “You’re talking about inciting violence. If the president tweets that we’re going to go invade Normandy and get involved with World War III … that stuff is inherently, technically, inciting violence, but that’s also the kind of thing that presidents do.”

Twitter has removed tweets from world leaders in the past, albeit sparingly. BuzzFeed reported that the service removed a tweet from an account associated with Iranian Supreme Leader Ayatollah Ali Khamenei in February that endorsed putting to death author Salman Rushdie for his book The Satanic Verses. 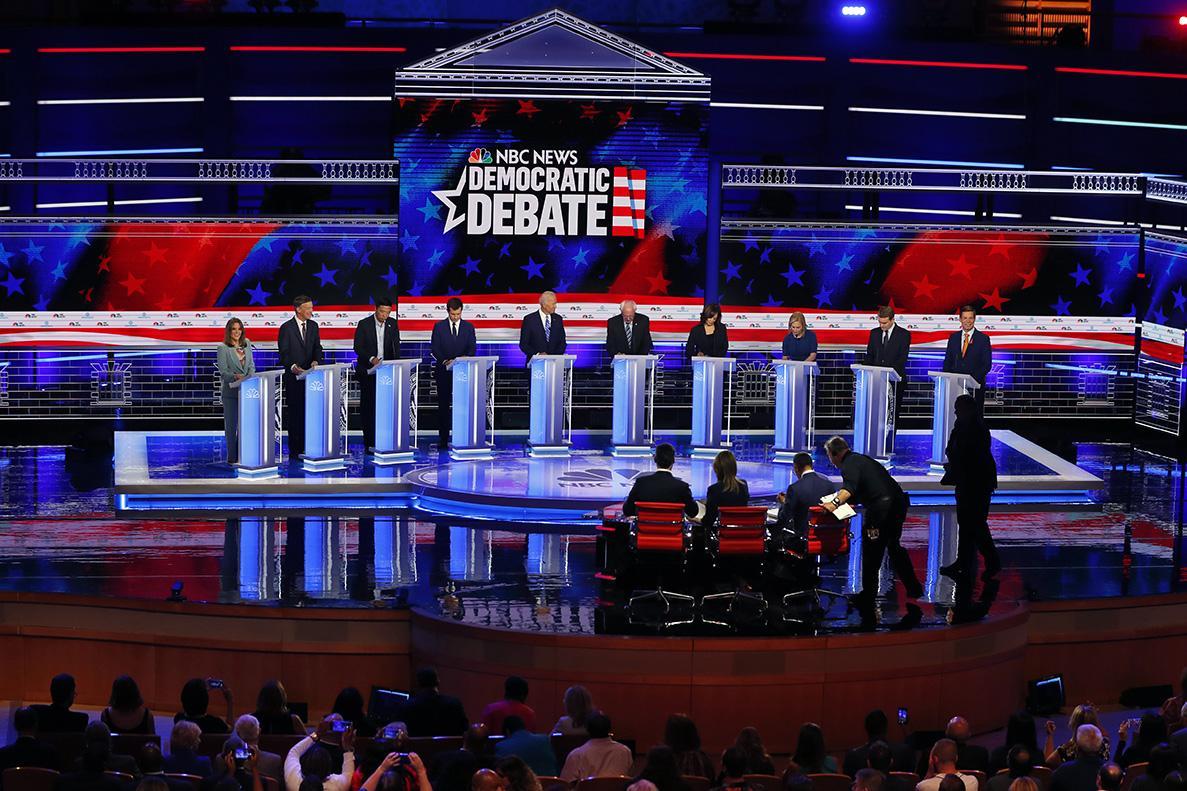 Quinnipiac’s poll numbers also have shifted dramatically. Its early June survey gave Biden an 11-point buffer over his closest opponent, with Harris at 7 percent. But the Quinnipiac poll this week showed Harris in second place at 20 percent, only trailing Biden by two points. Other polls, however, continue to show him with a double-digit lead.

Supporters of Biden’s opponents seem energized. Harris raised more than $2 million in the 24 hours after the debate, drawing on 63,000 unique donors with an average contribution of $30. Mayor Pete Buttigieg of South Bend, Ind., revealed he pulled in almost $25 million in the second quarter of 2019, topping Biden’s second-place total of $21.5 million. All candidates have to submit their donation numbers for the second quarter of the year to the Federal Election Commission by July 15.

New York City Mayor Bill de Blasio has tried to distinguish himself from the pack of Democratic candidates and their ever-leftward policies. National Review reported Monday that he said at the pro-LGBT New York City Pride March that under his presidency, U.S. taxpayers would fund gender-reassignment surgery as a “medical need.”

Sen. Cory Booker of New Jersey unveiled an immigration plan for his campaign on Tuesday, saying that he would “virtually eliminate” migrant detention, according to The Hill. He said he would use a string of executive orders to undo President Donald Trump’s immigration decisions and increase the cap on refugees, among other things. —Kyle Ziemnick 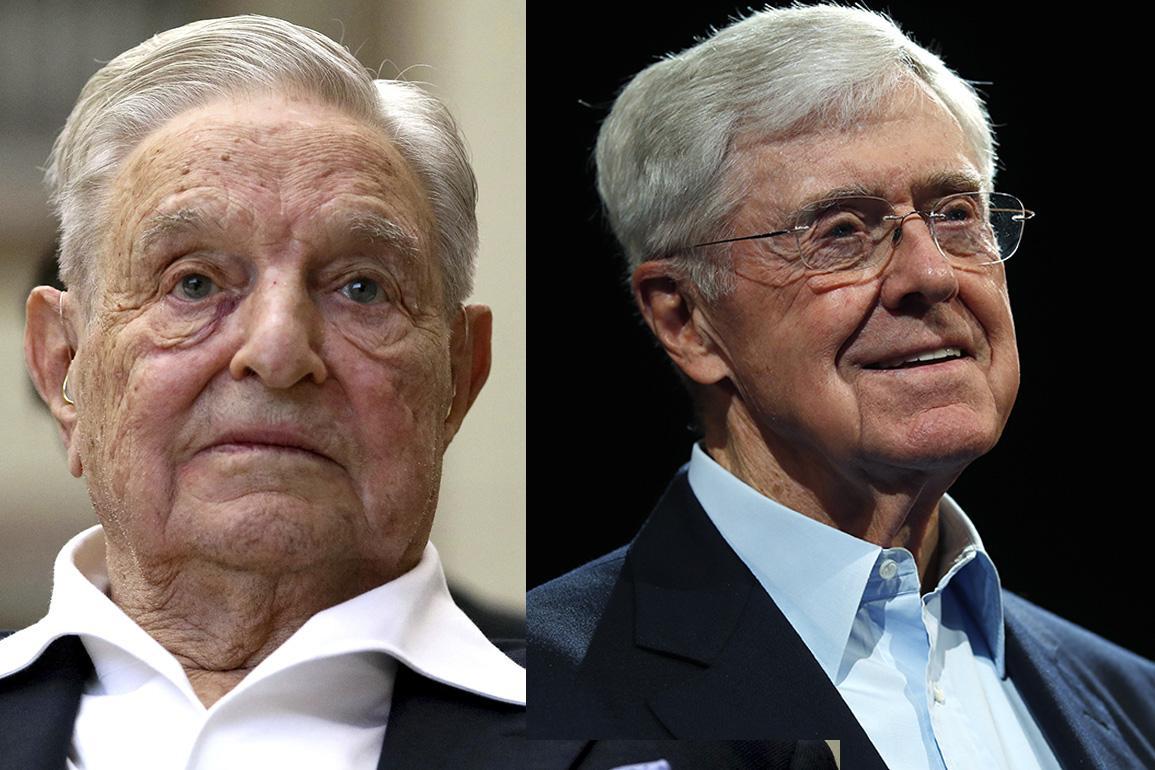 Billionaires George Soros and Charles Koch have long supported efforts on the far-left and far-right of the political spectrum, respectively. But the two have become unexpected allies in an attempt to stop U.S. military intervention. The Boston Globe reported the two have formed an anti-war organization called The Quincy Institute for Responsible Statecraft.

The new think tank’s website says its goal is to promote “ideas that move U.S. foreign policy away from endless war and toward vigorous diplomacy in the pursuit of international peace.” It is named after President John Quincy Adams, who was a diplomat for more than 20 years before his time in the White House.

Koch and his brother David have traditionally supported libertarian ideals and donated almost exclusively to Republican candidates. But in the past year, they have taken a more policy-based approach. The Kochs have even considered backing Democrats, according to Politico.

The think tank’s website says it is “a once-in-a-generation opportunity to bring together like-minded progressives and conservatives and set U.S. foreign policy on a sensible and humane footing. Our country’s current circumstances demand it.”

Soros and Koch plan to publicly launch the institute in November. —K.Z.

Twitter said it will "...take into account the 'immediacy and severity of potential harm' caused by a message."   The danger here is  that those determining what is or is not "potentially harmful" have already shown themselves to be decidedly leftist in thier views.  Anything that hints of "conservatism" would undoubtedly "endanger" thier world view, permitting them to censor it accordingly.

Twitter is built for bumper sticker barbs, not political discourse.  Therefore Twitter will lose this battle no matter what it does, unless it becomes not-Twitter.  Congress can only complicate matters by mucking around in this pie.