Supply and demand issues will linger even after communities reopen

A volunteer at a food bank in Albuquerque, N.M. Associated Press/Photo by Susan Montoya Bryan (file)

Stephanie Humphreys arrived at a small church in Austin, Texas, on Friday wearing a blue mask and a Hope Food Pantry T-shirt decorated with an image of vegetables shaped like a heart. Volunteers set up tables at the door with forms asking clients about income, government assistance, and personal details. In a back room, wooden pallets holding jars of peanut butter, boxes of milk, and canned goods line one wall. Volunteers fill paper bags with fresh beets, carrots, and kale. For an hour and a half two mornings a week, people can park along the curb, wait to fill out a form, and receive a bag of dry goods and produce.

Humphreys, Hope Food Pantry’s executive director, said more people were volunteering to help, and churches and community groups have increased donations, but the ministry’s number of clients recently dropped from an average of 30 to 50 people per day to 20 or 30. “We’re trying to figure out why we’re not getting the traffic,” she said, noting that because so many food pantries are closed because of the coronavirus pandemic, people are struggling to find one that’s open.

In other cities—even other parts of Austin—some food banks have the opposite problem: increased demand and shrinking resources. The pandemic and local shutdowns have affected food banks in a variety of ways. The sputtering economy and lingering fears of catching the virus are forcing food pantries to continue adapting.

In April, the New York City Mission Society told CNBC that one-third of food pantries nationally had closed during the pandemic. Pantries had to trade the “choice model”—in which clients browse shelves and take what they need—for delivery or curbside pick-up. Some couldn’t adapt, especially after sending elderly volunteers home. A recent survey of 200 food banks by the Feeding America network found that more than half had reduced inventory levels.

“Like the clients, I’m still not sure which [Austin food pantry] is open and which is not,” Humphreys said.

About 15 percent of the city’s food pantries shut down during the pandemic, though most have reopened with new volunteers and a new game plan, said Derrick Chubbs, CEO of the Central Texas Food Bank.

Chubbs said the Central Texas Food Bank—unlike Hope Food Pantry—has massive demand: From February to March, new clients increased by 200 percent. But food donations from grocers are down 80 percent, leaving staff members to push shopping carts through grocery stores and pay full price like everyone else. The food bank spends 10 times more money on food each week now. It is maintaining its mobile pantries and has added large distribution events, curbside pickup, and food delivery—all with a reduced volunteer force. Instead of warehouse shifts with 120 people, only 30 work at a time in three shifts to stay distant.

Other food banks have similar stories. The Community Food Bank of New Jersey has averaged 50 percent more clients in recent weeks. It has spent about $1 million above its budget each month, paying for food and temporary staff.

“April was a record-breaking month,” Community communications director Nicole Williams said. “The food bank started in 1975. In those 45 years, I don’t think our services have ever been needed more than they are right now.”

The Feed My People food bank in Eau Claire, Wis., is still distributing emergency food boxes, despite COVID-19 initially leaving it understaffed and understocked. Its warehouse normally buzzes with activity, filled with boxes of fresh produce and volunteers. Volunteers in masks huddle in groups of three to four, and the immunocompromised stay home. Several of Feed My People’s partner organizations transitioned to curbside service only, while others have closed.

Austin has plenty of food pantries, each with its own limited hours of operation. With some closing and reopening, and others shifting operating hours, Humphreys is not surprised people are confused. She has sent press releases, informed a local help hotline, and contacted other groups to tell them Hope Food Pantry is open and stocked: “We’re a little discouraged about the low numbers. As you can see, we’re ready.” 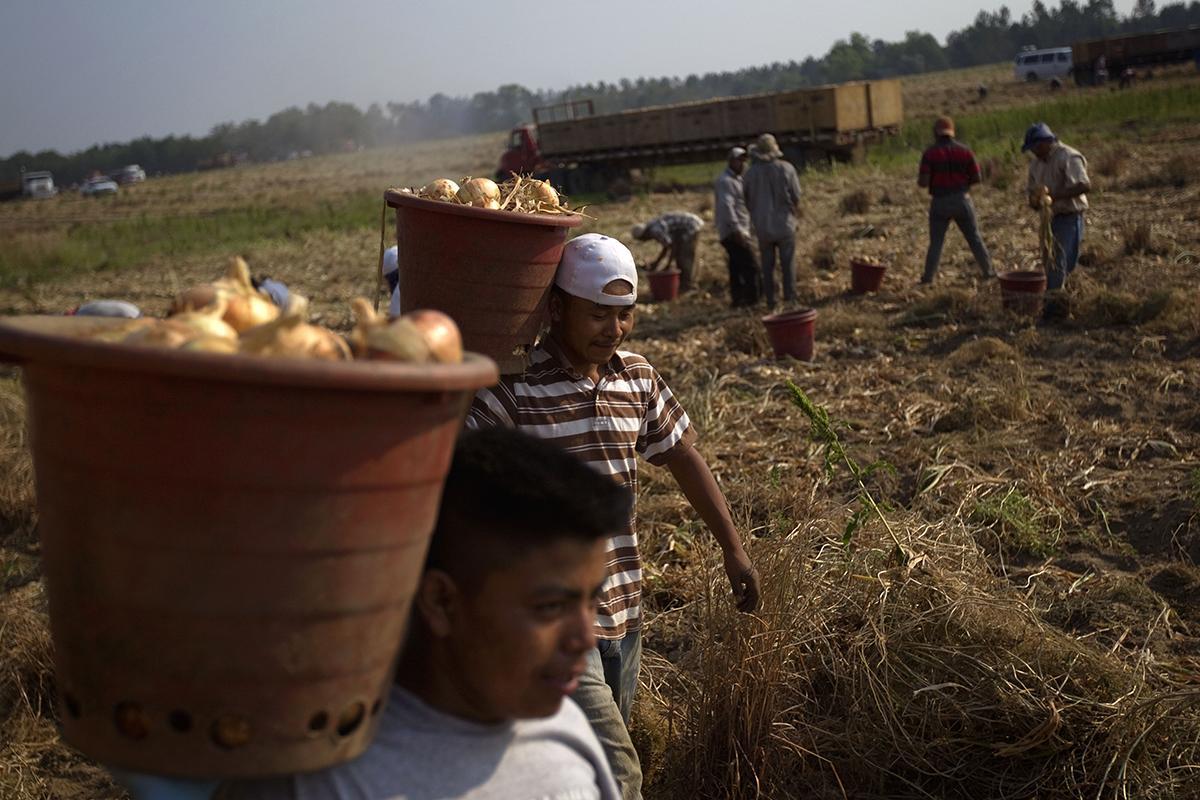 While grocery stores were emptied of toilet paper and hand sanitizer in March, their produce aisles remained fairly well-stocked, thanks in part to recent changes in immigrant visa policies.

When U.S. Customs and Immigration Services and the State Department in March suspended routine visa services, including those for legal migrant workers, farmers told lawmakers that having fewer temporary agricultural workers would make supplying grocery stores difficult. Some 258,000 guest workers make up about 10 percent of the country’s agricultural workforce. In response, the State Department not only relaxed restrictions but also expanded permissions for H-2A seasonal workers.

“[The changes] ease the flow of guest workers at a time when our farmers are redoubling their efforts to provide our nation with safe, healthy, abundant, and affordable food,” said Dave Puglia, CEO of Western Growers.

H-2A visas grant temporary legal status for agricultural workers. These migrants, mostly from Mexico, harvest many of the fruits and vegetables that can’t be gathered mechanically on West Coast farms.

Before the pandemic, the U.S. Department of Labor limited H-2A workers to specific approved roles. The updated policy gives employers more freedom to assign workers to a variety of duties or job locations. Other provisions let seasonal workers stay in the United States for more than three years and grants them a 21-day leave if they contract the coronavirus. —Joshua Raimundo

The coronavirus continues spreading through crowded U.S. prisons. As of late last week, more than 42,000 U.S. inmates had tested positive for COVID-19, and more than 460 had died of the disease, Prison Fellowship reported. In response, state and federal prisons have released more than 15,000 inmates as of Thursday to slow the spread of the disease. The methods of release include parole, commutations, furloughs, and home confinement. —Rachel Lynn Aldrich