ABUJA, Nigeria—Boko Haram militants last week released all but six of 111 schoolgirls kidnapped from a school in northeast Yobe state. At least five of the girls died in captivity, but Christians across the country continue to call for the release of one girl held back by the militants for refusing to renounce her Christian faith.

The militants on Feb. 19 stormed the village of Dapchi and kidnapped the students. They returned the girls to Dapchi early Wednesday morning and warned the residents not to send their children back to school. Boko Haram loosely translates as “Western education is sin.” The girls finally returned to Dapchi on Sunday after authorities took them to Abuja, the capital city, for medical screening and to meet with Nigerian President Muhammadu Buhari.

Some of the freed girls reported 15-year-old Leah Sharibu, the only Christian in the group, refused to denounce her faith at the request of the Islamic extremists, who decided to keep her in captivity. Leah’s father, Nathan, said he was “very happy” his daughter refused to convert to Islam. Her mother, Rebecca, told NPR she remains worried about her daughter. “I’m still fasting, every day I’m fasting for Leah,” she said. “Let the government try their best to bring her for me.”

After the girls’ release, Buhari in a statement said he “will not relent” until Leah comes home safely. But the mystery surrounding the girls’ capture and rescue raised concern. Nigerian Information Minister Lai Mohammed said the government engaged the militants in talks and reached a weeklong cease-fire agreement that allowed them to return the girls to Dapchi without security intervention. Inspector General of Police Ibrahim Idris over the weekend said he received word that the militants would release Leah soon, but she remains in captivity.

“It’s an indication of lack of strategy on the side of the government,” said Martin Ewi, an analyst with the South Africa–based Institute for Security Studies.

The Rev. Jeremiah Gado, president of the Evangelical Church Winning All, where Leah’s family attends services, said the church salutes her “courage, doggedness, and faith,” adding, “As a church, we continue to pray for her release and the release of all abducted Nigerians.”

The president of the Christian Association of Nigeria (CAN), the Rev. Samson Ayokunle, called on churches across the country to pray this past Sunday for Leah’s release.

CAN’s representative for the 19 northern states, the Rev. Yakubu Pam, commended Leah as “a general of faith” and called for her release: “I think the church in Nigeria should celebrate her because she has proved to be one of those people whose life will be speaking as an example. In the face of such danger, she refused to deny her faith.” 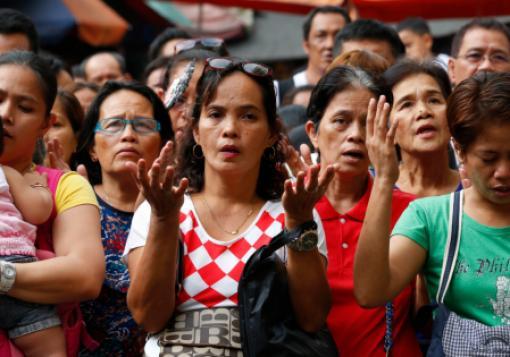 Catholics pray at a church in Manila. Associated Press/Photo by Bullit Marquez

A judge in the Philippines ordered the release of a Protestant bishop this month, saying the evidence against him was “not strong enough to convict.” Police claimed Bishop Carlo Morales possessed illegal explosives and detained him for 10 months. Many religious groups denounced the claims as false, the Anglican Communion News Service reported.

Authorities released Morales on bail, but prosecutors are seeking additional evidence against him, UCA News reported.

As the religious majority in the country, Christians in the Philippines don’t generally face government persecution, but they sometimes are accused in the government’s decadeslong anti-communism efforts. Christians often work with the poor in rural areas where the Communist Party of the Philippines (CPP) and its armed wing, the New People’s Army (NPA), also operate.

President Rodrigo Duterte declared the CPP and NPA “terrorist” groups in 2017. This month, Duterte sought to label as terrorists 600 individuals, including four Catholic priests, a UN official, and a former lawmaker.

“The act of prosecuting a servant of God based on trumped-up charges is a big injustice imposed on a person and to the church that expressed solidarity with the struggle of the people,” said Supreme Bishop Rhee Timbang of the Philippine Independent Church, Morales’ denomination. Timbang also criticized the “persecution of activists tagged as terrorists.” —Julia A. Seymour 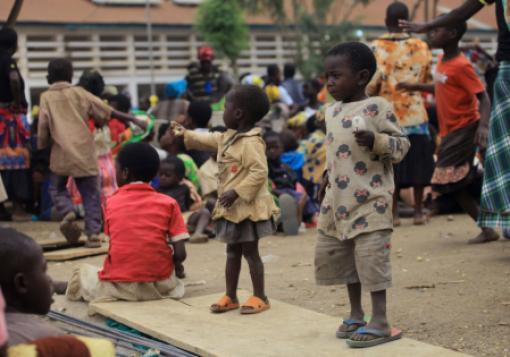 Catholics pray at a church in Manila. Associated Press/Photo by Bullit Marquez

International aid workers continue to decry worsening humanitarian conditions in the Democratic Republic of Congo. Violent militia clashes have intensified across Congo in recent months, especially as President John Kabila delayed his mandate to step down from office. Earlier this month, more than 4,000 people, mostly women and children, fled violence in the eastern provinces over a period of three days. The violence this year has so far displaced more than 57,000 people, compared to 44,000 people all last year.

Jeanine Bandu Bahati, who leads a peace and development nonprofit group in Congo, told the UN Security Council of massacres, rapes, and kidnappings. In one instance, she said militants shot a 54-year-old mother of nine, and kidnapped and raped one of her daughters. “This is a time bomb,” Bahati said. “Women of the DRC want to be considered, and want you to respond to their cry of alarm and distress.”

Jonathan Allen, the U.K. ambassador to the United Nations, called for international pressure to ensure government accountability and free elections slated for December. “Let me be clear, humanitarian aid will only ever provide temporary relief in this crisis,” he said. “The key root cause is political instability, which drives the deteriorating security and humanitarian situations.” —O.O.

A Pakistani court acquitted 20 Muslims suspected of staging a 2014 attack that killed a Christian couple accused of blasphemy. The incited mob burned alive Shahzad Masih, 26, and Shama Shahzad, 24, in an industrial kiln following accusations that they burned a Quran. Authorities in 2016 sentenced five men to death over the incident, and eight others received prison sentences. “This case could have been a watershed moment for the Pakistani government to regain confidence of its minorities and the international community regarding concerns over the violence perpetrated in the name of blasphemy,” senior Supreme Court advocate Saiful Malook, told Morning Star News. Open Doors USA ranks Pakistan as the fifth worst country for Christians, who continue to battle blasphemy accusations and forced conversions. —O.O.

A German court on Monday ordered the continued detention of former Catalan President Carles Puigdemont while he awaits a decision on his extradition back to Spain. Authorities arrested Puigdemont on Sunday morning as he traveled from Helsinki to Brussels. The former leader fled to Brussels following a failed independence declaration in Catalonia in October. Spain took control of the autonomous region and issued the European arrest warrant to extradite Puigdemont on charges of rebellion, sedition, and embezzlement. Following his arrest, tens of thousands of protesters took to the streets in Barcelona, Spain’s capital, to demand his release. —O.O.