He called their actions “horrifying” and “illegal” and claimed they made death threats to escorts, chased patients approaching the facility, leaned into cars to distribute pro-life literature, and blocked the paths of people seeking abortion with 3-by-5-foot signs depicting aborted babies.

The attorney for the pro-life advocates, who are associated with Church at the Rock in Brooklyn, disputes those claims.

“Members of the Church at the Rock peacefully counsel women who are considering having an abortion. They conduct themselves reasonably and compassionately, and offer information about abortion alternatives to those willing to listen,” Thomas More Society’s Andrew Bath said in a statement. “This is the exercise of their core First Amendment rights and is an activity that takes place on the public sidewalk, the traditional venue for expression concerning important ideas and societal issues.”

For at least five years, pro-life advocates have met on Saturday mornings in front of the facility to protest abortion. The legal action last week follows complaints from workers at the Choices facility and an investigation initiated by Schneiderman last June.

In 2014, the U.S. Supreme Court unanimously struck down a Massachusetts law encircling abortion centers with a 35-foot buffer zone. The justices ruled buffer zones could not restrict access to public streets and sidewalks. But they did not overturn a previous decision upholding buffer zones in general as “content neutral.”

A ‘Handel’ on life

Last week, Democrats took a hit after spending millions in a losing effort to take Georgia’s 6th Congressional District, but they’re not the only ones feeling the pain. Republican Karen Handel’s victory means Planned Parenthood has one more enemy in Washington.

Handel edged out Democrat Jon Ossoff by fewer than 10,000 votes in the most expensive House race in U.S. history. All told, the election cost more than $50 million, with big donors and political groups weighing in from all across the country. Planned Parenthood was Ossoff’s second largest donor, spending $734,760 to keep Handel out of Congress.

Susan B. Anthony List President Marjorie Dannenfelser summed the election up well in a tweet: “Lesson No. 1 from the Handel victory: Planned Parenthood is not a good running mate.”

Dannenfelser and other pro-life groups backed Handel because they trust her to stand up to Planned Parenthood and the abortion industry in Congress. In 2012, Handel left the Susan G. Komen for the Cure Foundation after she tried to stop Komen’s donations to Planned Parenthood.

In her book about the experience, Planned Bullyhood, Handel detailed her views on Planned Parenthood and explained why abortion is such a personal issue for her. She and her husband tried to conceive a child for years. They contacted fertility clinics and prayed to God for a miracle, but the Handels remained childless—and seeing news stories about the number of women ending their pregnancies through abortion only compounded her sorrow.

“Out of this very personal, painful struggle, my pro-life beliefs were deepened,” Handel wrote.

Having strong pro-life voices in Congress is key, particularly now. As Republicans consider healthcare legislation that includes defunding Planned Parenthood, the abortion giant is fighting back. Over the last several months, Planned Parenthood supporters have made more than 157,000 calls to congressional offices, organized 2,200 events across the country, and delivered close to 1 million petitions to Congress to keep the abortion provider’s nearly $500 million in federal funding. —Evan Wilt 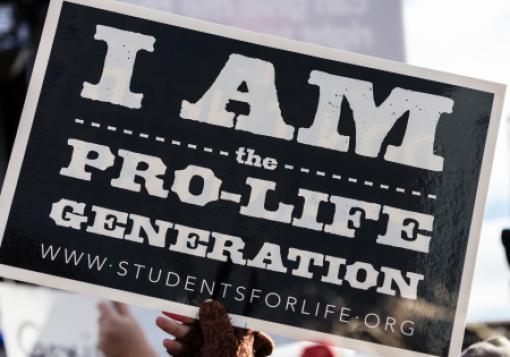 Planned Parenthood’s plans to open a “counseling center” inside a Pennsylvania high school are on hold—for now.

Wearing blue shirts declaring, “I am the pro-life generation,” about 40 teens from Reading High School joined community members to pack the Reading School District’s board meeting last week. Board members suddenly and without notice dropped the proposed Planned Parenthood center from the agenda and deferred the vote until August.

The group AccessMatters proposed the center, which Planned Parenthood would run. Staff would hand out condoms and refer students to “community-based providers for sexual and reproductive health services.”

“They cannot be allowed prime access to our children,” she said. —S.G.

Texas Gov. Greg Abbott signed a law earlier this month that requires abortion centers to display signs with human trafficking hotline numbers and makes it a first-degree felony to perform an abortion on a minor sex-trafficking victim. Abortion facility staff must display the signs in English and Spanish—and any other common language for the area—and post them in emergency rooms, bathrooms, and consultation rooms. Last month, the governor signed a law that requires commercial truck drivers to receive training on how to spot and report sex trafficking. The abortion center sex trafficking law goes into effect Sept. 1. —S.G.

The American Civil Liberties Union and the Center for Reproductive Rights filed a lawsuit last week against four Arkansas pro-life laws passed this legislative session. The suit challenges laws that ban dismemberment abortion, require third-party notification and permission before minors get an abortion, require reporting to law enforcement the details of abortions on girls between 14 and 16, and require doctors to obtain medical records for a woman’s pregnancy history. Three of the four laws take effect Aug. 29, with the medical records requirement set to take effect Jan. 1. —S.G.