People wait with caskets outside a crematorium in Yangon, Myanmar, on July 14. Associated Press

Laura Marshall, the Myanmar director for the Norwegian Refugee Council, typically works to provide internally displaced people with food, shelter, and other needs. As the pandemic rages out of control in Myanmar, her job involves an additional, more somber task.

“I’m literally writing a condolence message every day,” Marshall said. At least 20 percent of her agency’s staff in Yangon, Myanmar’s largest city, has come down with COVID-19 since May. “It’s been horrifying listening to people trying to find spaces in hospitals and trying to secure basic things like oxygen when they’re just not available,” said said.

The per capita death rate in Myanmar surpassed those of Indonesia and Malaysia in late July. Of more than 10,600 deaths from COVID-19 in the country, aid groups said more than 60 percent occurred over the past month.

Myanmar’s military takeover in February has made the situation worse because coup leaders are weaponizing the pandemic to increase their power, activists say. The military is targeting healthcare workers with violence and oppression while restricting medical resources for civilians and dissidents.

Working professionals, especially doctors and other healthcare providers, led protests and civil disobedience throughout the country after the ouster of democratic leader Aung San Suu Kyi in February. Since the coup, security forces have staged at least 260 attacks on health workers, said Tom Andrews, a United Nations expert on human rights in Myanmar.

At least 157 healthcare workers have been arrested, 32 wounded and 12 killed since Feb. 1, according to Insecurity Insight, which analyzes conflicts around the globe. The military has issued arrest warrants for 400 doctors and 180 nurses accused of supporting and taking part in the civil disobedience movement. Many of them no longer report to work out of fear.

“I could be arrested by the junta anytime if I returned to the hospital,” said a doctor in Mawlamyine.

The military is also limiting civilian access to healthcare, saving the country’s limited medical resources for itself and its supporters. Military leadership, known as the State Administrative Council, banned oxygen sales to civilians but has insisted it is supervising the supply to avoid hoarding. Yanghee Lee, a former United Nations Myanmar human rights expert and a founding member of the Special Advisory Council for Myanmar, said the military bars civilians who support the pro-democracy movement from receiving treatment at military hospitals and stopped distributing masks and personal protection equipment.

“The military is weaponizing COVID,” she said.

Some doctors have gone underground to consult online or visit patients at home. A doctor who practiced as an orthopedic surgeon before the coup told CNN his telemedicine group consulted with more than 1,000 patients in a month.

“We are treating at least 150 people per day,” he said in late July. “Yesterday, two patients died when we were doing the consultation because there was a lack of oxygen.”

Marshall with the Norwegian Rescue Committee said some people at internally displaced camps have no access to healthcare. The number of displaced people in urban areas is also growing. She recently heard of a woman who lost her life during childbirth.

On Sunday—six months after the coup—military leader Min Aung Hlaing declared himself prime minister and said he would lead the country under an extended state of emergency until elections in two years. He blamed “fake news and misinformation via social networks” for fueling mistrust in the military’s pandemic response.

United Nations spokesman Stephane Dujarric said the move could further threaten regional stability: “It’s moving us further away from what we have been calling for, member states have been calling for, which is a return to democratic rule, a release of all … political prisoners, a halt on the violence and the crackdown.” 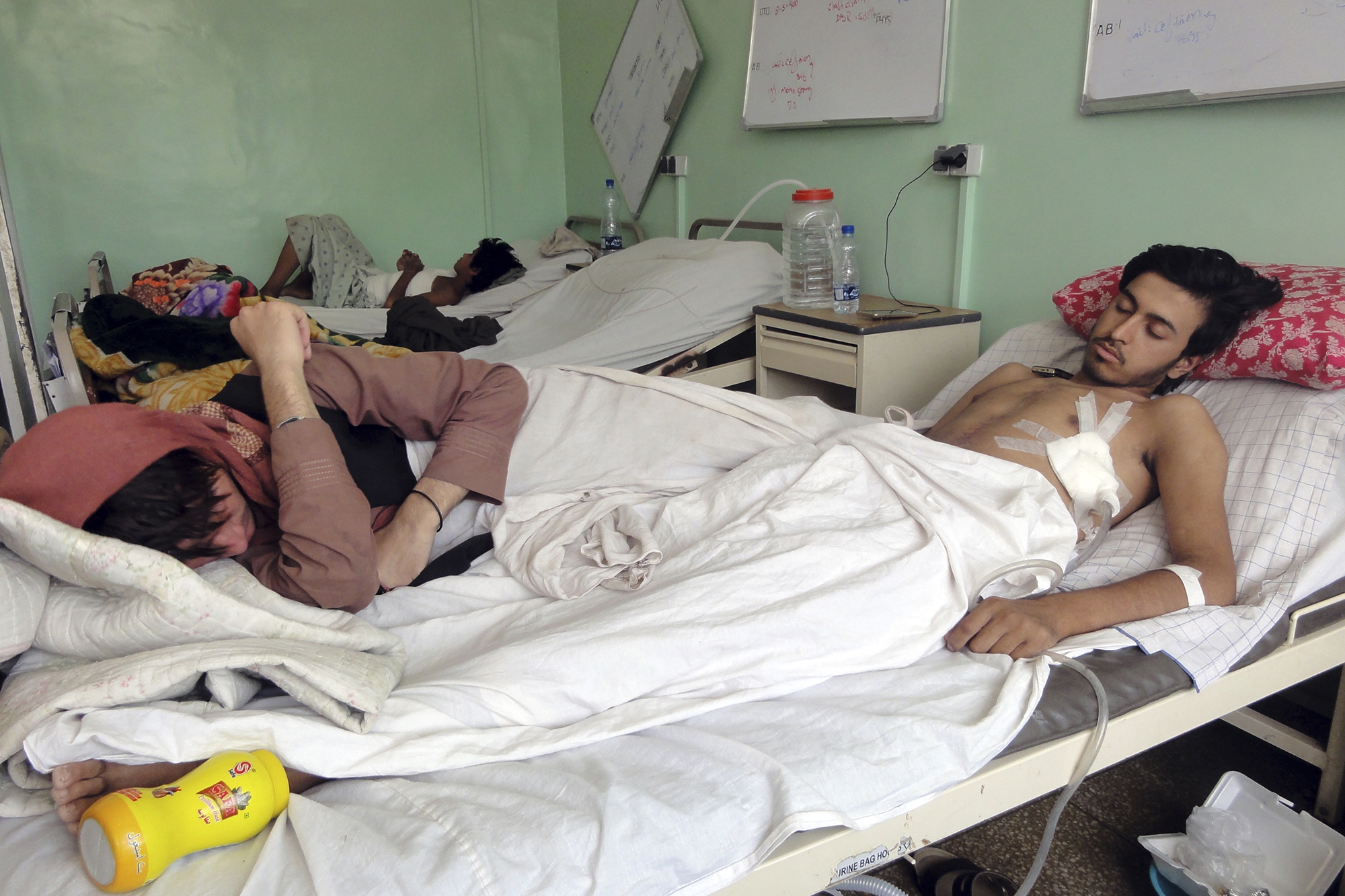 Afghans wounded in fighting between the Taliban and the government in Kandahar province. Associated Press/Photo by Sidiqullah Khan

The Taliban claimed responsibility for a suicide bomb and gun attack on Tuesday in the highly secured Green Zone in the capital city of Kabul. At least eight people died in the attack, which targeted the residence of acting Defense Minister Bismillah Mohammadi. The zone houses the U.S. embassy and other diplomatic missions.

This week, the Taliban targeted at least three provincial capitals. In Lashkar Gah, capital of the southern Helmand province, Taliban fighters seized control of the government-run radio and television station and captured nine of its 10 districts. The Taliban ambushed and killed the director of Afghanistan’s government media center on Friday in Kabul.

Sarah Leahy, director of the Doctors Without Borders project in Helmand, said several doctors stayed back at a hospital in the province for safety and to treat the rising number of war victims. “Houses are being bombed, and many people are suffering severe injuries,” Leahy said. “The situation has been dire for months, but now it is even worse.”

Afghanistan President Ashraf Ghani attended an emergency session of the National Assembly on the worsening violence on Monday. He blamed increasing violence on the “imported, hasty” peace process led by the United States, which he said “not only failed to bring peace but created doubt and ambiguity.”

The Taliban’s insurgency intensified in May when the United States announced its plan to speed up its military withdrawal and complete it by the end of this month. As the violence spiked, the Biden administration on Monday expanded its program to help Afghans who supported the United States during the war. Current and former employees of U.S.-based news organizations, U.S.-based aid and development agencies, and other relief groups that receive American funding can get help relocating. But aid workers have criticized the move since it does not help with their one-year stay in a third country while their immigration application is processed. —O.O. 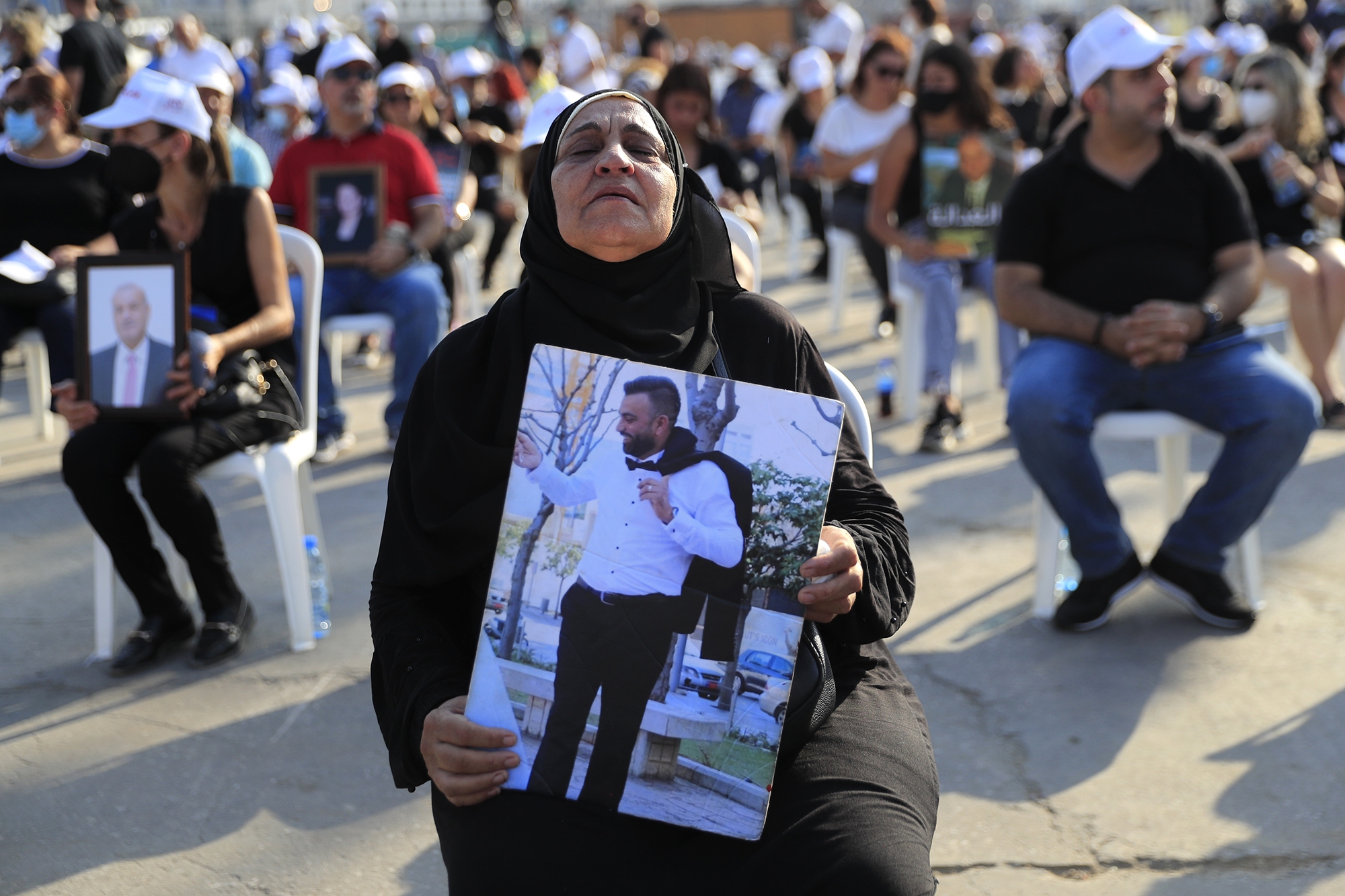 In the Lebanese capital of Beirut, thousands of people gathered on Wednesday at the site of a massive explosion at the port one year ago. Protesters clashed with police outside Parliament and staged marches where they chanted against the country’s political class.

At least 214 people died and thousands of others sustained injuries on Aug. 4, 2020, after tons of improperly stored ammonium nitrates exploded at the port, making it one of the largest nonnuclear explosions in history. A government investigation into the blast has still not revealed who ordered the shipment or why authorities ignored several internal reports on the risk.

Banks, stores, and government offices closed on Wednesday, while embassies and government buildings flew flags at half-staff. Families held prayers and a memorial inside the port and read out the names of each victim. Residents placed a metal sculpture of a gavel with the words, “Act for Justice,” opposite the port, and people gathered and held photos of loved ones who died in the blast. The explosion compounded an economic crisis that has pushed more than half of the country’s population into poverty. —O.O. 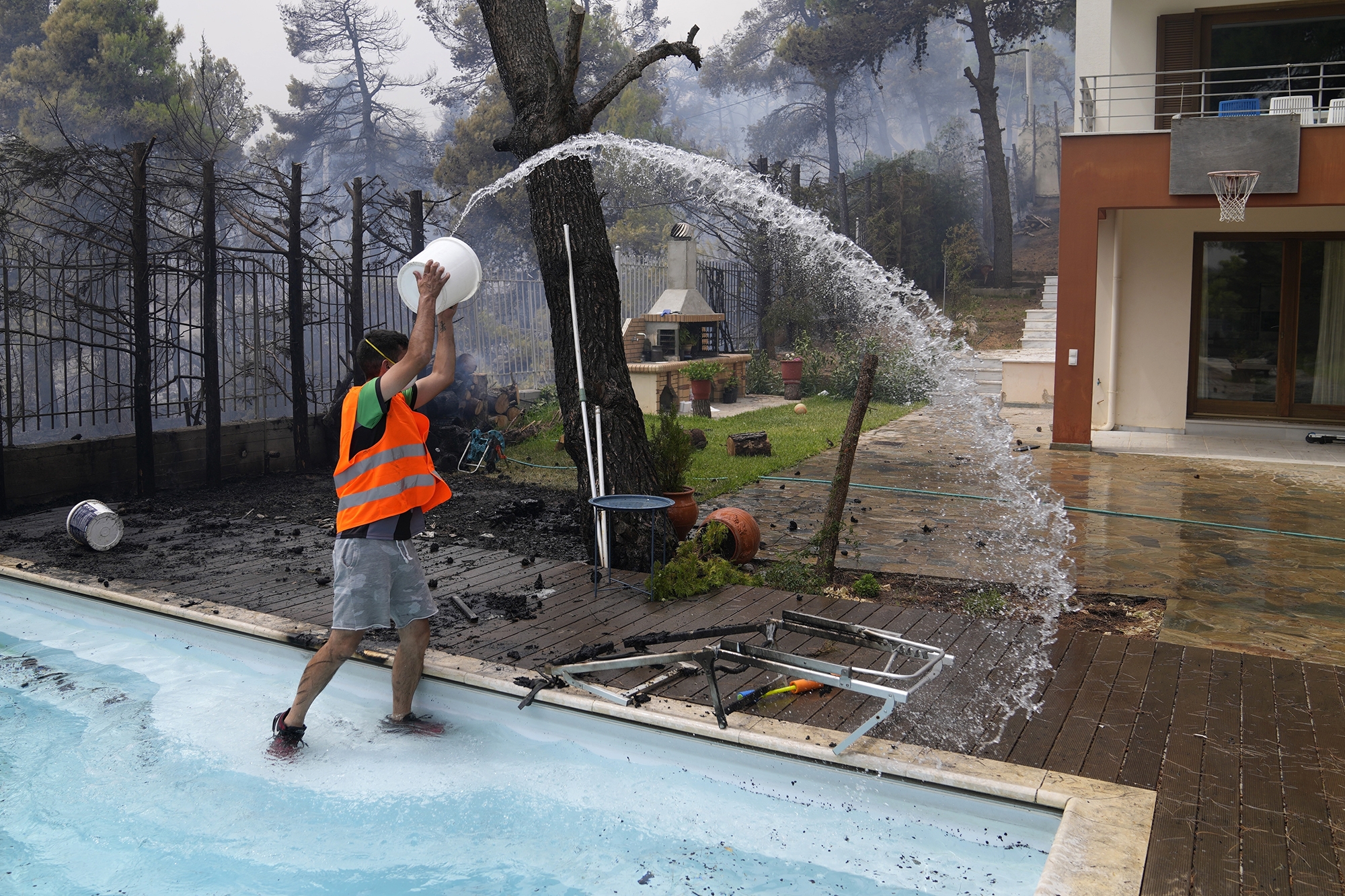 A man throws water from a swimming pool as fire approaches his house near Athens, Greece, on Friday. Associated Press/Photo by Thanassis Stavrakis

More than 500 firefighters worked this week to contain a major forest fire on the outskirts of northern Athens that sent thousands of people fleeing. Authorities in Greece, Spain, Italy, and along the Turkish coast are also struggling with deadly blazes as the region records historic temperatures above 100 degrees Fahrenheit.

The fire in Athens was one of 81 wildfires that broke out across the country in 24 hours starting late Monday. The fire department said it deployed five water-dropping planes, helicopters, and several volunteer groups. Authorities also evacuated more people from the southern Peloponnese region as a fire burned near ancient Olympia. Forecasters said the heatwave would likely continue until the end of the week.

In Italy, the fire service said it tackled more than 800 flareups in 24 hours during the weekend, most of them in the south. Authorities evacuated more than 800 people, including nuns in a convent. Thousands of people fled towns and tourist resorts along the Turkish coast, and volunteers used boats to evacuate those trapped. Turkish authorities said they have contained more than 130 fires and reported at least eight deaths. —O.O. 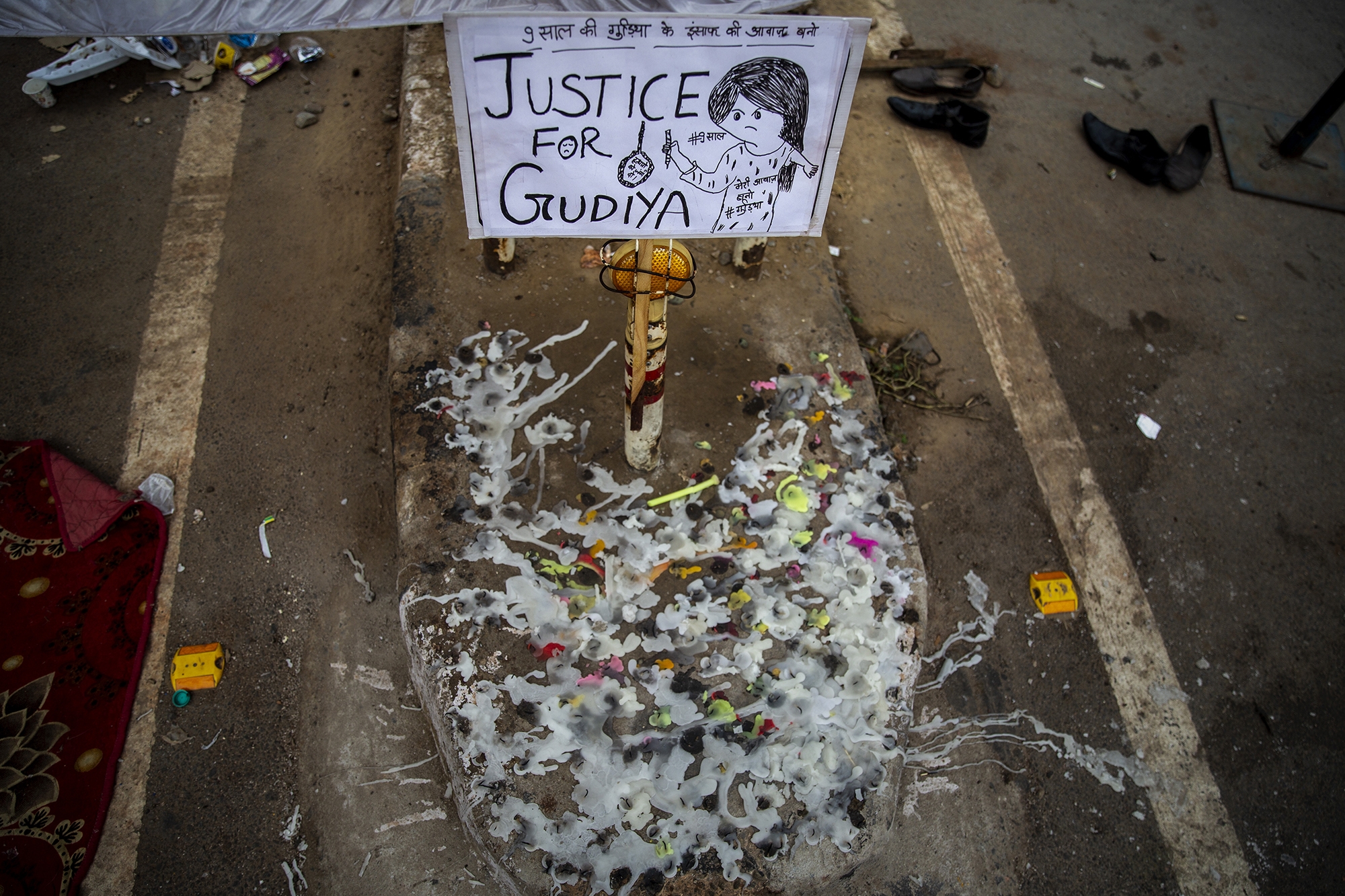 Hundreds of protesters crowded the streets of New Delhi on Wednesday, the fourth straight day of demonstrations over the rape and murder of a 9-year-old. Authorities said the girl belonged to the Dalit community, India’s lowest caste, which still faces discrimination.

The girl’s family said she went to fetch water at the crematorium near her home on Sunday when she was raped. They said the crematorium’s priest told the mother her daughter was electrocuted and convinced her to cremate the body, saying a police investigation could involve removing her organs for an autopsy and selling them.

Authorities arrested four suspects, including the Hindu crematorium priest and three employees, on suspicion of gang rape, murder, and criminal intimidation, according to local media.

Protesters held up banners that read “Justice for India’s daughter” while chanting similar calls. Nearly 90 rapes were reported every day in India in 2019, according to the National Crime Records Bureau. Activists believe the actual number is much higher since many cases go unreported. —O.O.