In a northwestern region of Myanmar, protesters on Wednesday damaged 11 cell phone towers owned by Mytel, a military-run business that operates one of the country’s four major cell networks. Local media showed onlookers cheering as an explosion at the base of one tower caused it to crumble.

“Our intention is to destroy the military business,” one protester told Agence France-Presse. “Their businesses support [them] to maintain their power.”

The destruction follows the shadow government’s call this week for a nationwide uprising. Several lawmakers ousted by the military lead the group. Since the junta’s coup seven months ago, anti-military demonstrators have targeted military businesses and infrastructure, but the National Unity Government’s (NUG) formal call for disruption likely further complicates the country’s political situation.

Duwa Lashi La, the NUG’s acting president, announced the “people’s defensive war” in a Tuesday social media post. He highlighted the military’s war crimes, asked civil servants to leave their posts, and encouraged ethnic armed groups to target the junta. “We have to initiate a nationwide uprising in every village, town and city in the entire country at the same time,” he said.

When the United Nations convenes its 76th General Assembly next week, the Credentials Committee is slated to decide whether the military junta or the shadow government will take the country’s seat at the international body.

Military spokesman Zaw Min Tun dismissed the calls as an empty threat aimed to garner international attention. “We urge the people not to believe such rumors and not to be worried about them,” he said.

The military in Myanmar, also known as Burma, overthrew the government led by Aung San Suu Kyi on Feb. 1, sparking a wave of protests and mass arrests that have resulted in more than 1,000 deaths and 6,000 detentions. Last month, military leader Min Aung Hlaing declared himself prime minister and extended the state of emergency until the 2023 elections.

The military junta has declared the NUG party a terrorist group. The declaration also targets the People’s Defense Forces, a coalition of ethnic militias and armed groups that include opponents of the regime.

The call to resist triggered panic buying in some places, including the country’s largest city of Yangon, where cars formed long lines outside gas stations. Residents reported increased security patrols.

The declaration also sparked fresh clashes in border regions. Local media reported members of the Karenni Army and other local armed groups attacked a police station in the region bordering Thailand but withdrew when the military intervened. Similar clashes stirred in the northwest, while anti-military protests took place in a southern coastal city and near the border of Bangladesh.

Richard Horsey, a Myanmar expert at the International Crisis Group, told Reuters it’s unclear if the opposition movement can oppose the well-resourced military, but noted armed resistance will likely hamper its foreign support. Indonesia, Malaysia, and other countries belonging to the regional Association of Southeast Asian Nations, which has led the push for a diplomatic response to the conflict, called for calm and expressed frustration about how the escalation affects its five-point peace plan, delayed since April.

The Special Advisory Council for Myanmar in a statement said it understands the people’s frustration but called the call to arms unfortunate. “Violence is the cause of the suffering of the people of Myanmar, it is not the solution,” said council member Chris Sidoti. “We fear for what would happen as a result of this decision.” 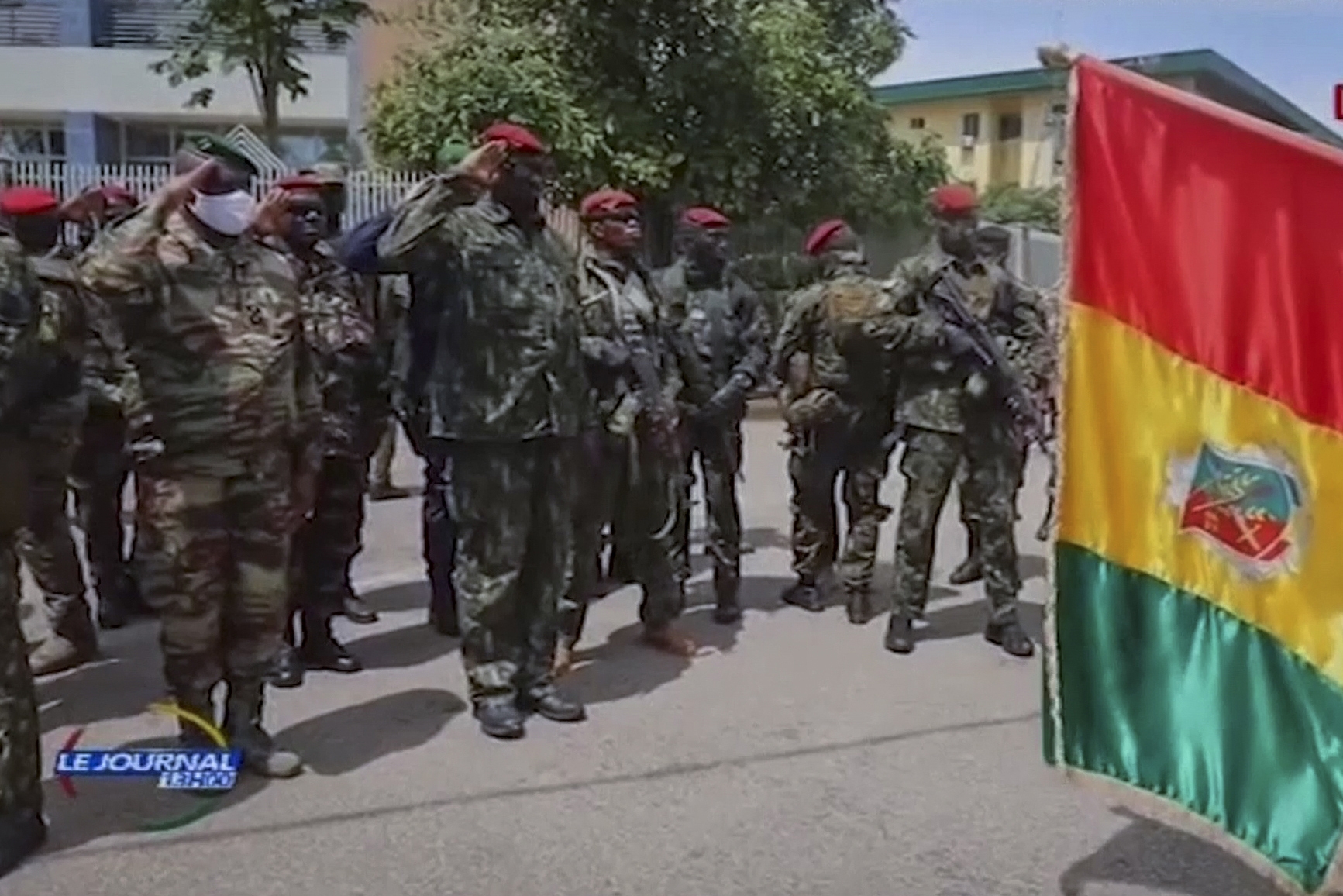 Soldiers who staged a Sunday coup in the Republic of Guinea’s capital of Conakry said they will form a new union government in the coming weeks.

The military detained 83-year-old President Alpha Conde on Sunday after hours of heavy gunfire rang out near the presidential palace in Conakry. Coup leader Mamady Doumbouya, head of the army’s elite Groupement des Forces Spéciales unit, suspended the constitution and dissolved the government and parliament. Conde had initially set up the elite unit for his protection.

The military junta on Monday replaced all governors with regional commanders and banned ministers from traveling abroad. They also imposed a curfew and closed air and land borders. The junta in a statement confirmed officers are holding Conde but said he still had access to his doctors.

Conde, who has remained at the helm of authority since 2010, lost his majority support after unconstitutionally pursuing a third term. Members of the main opposition party announced support for the coup. 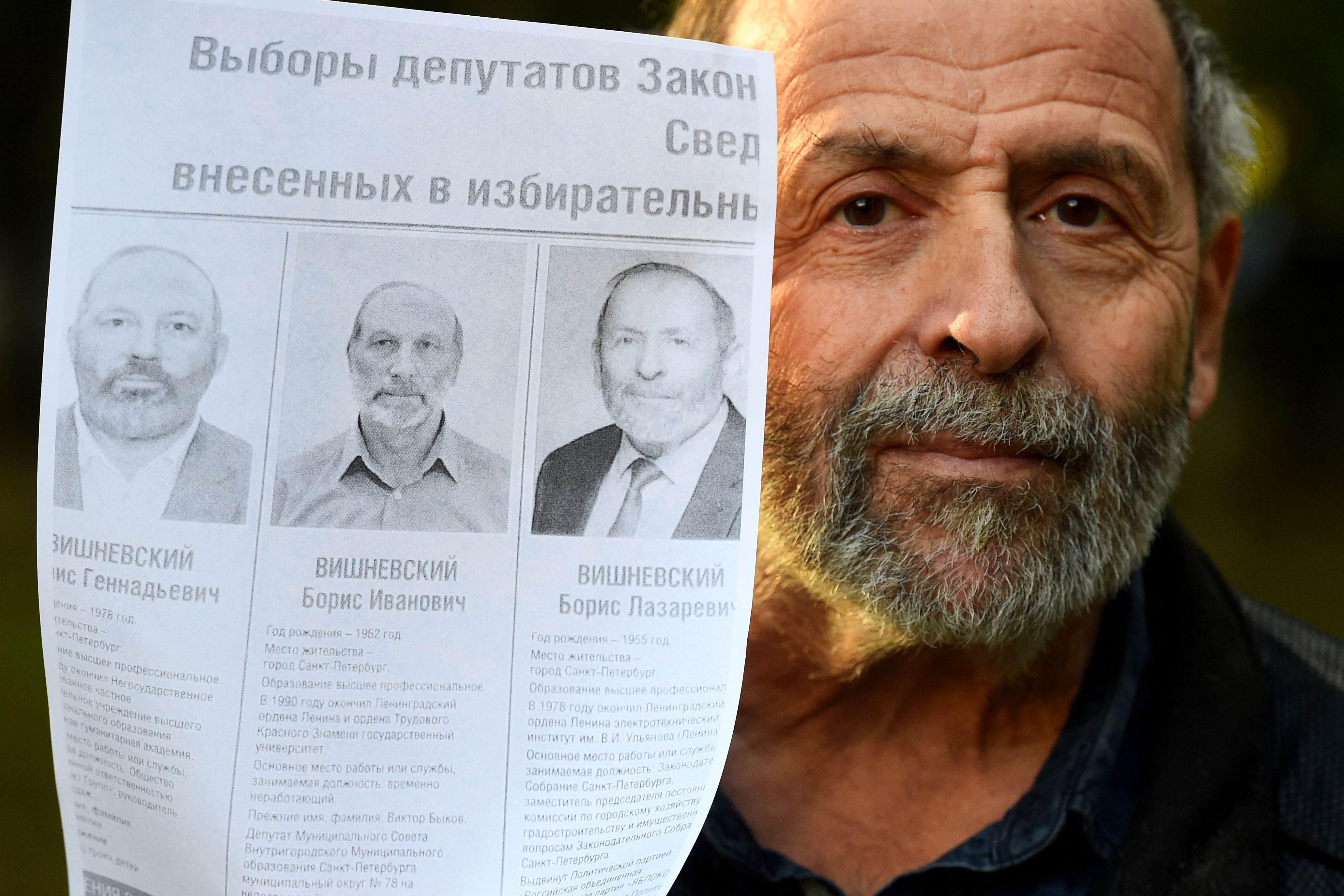 An election poster in a St. Petersburg, Russia, district on Sunday showed three candidates with the same name who looked almost identical.

Boris Vishnevsky is running to keep his municipal position as a senior member of the liberal Yabloko party in this month’s elections. His two opponents, previously named Viktor Bykov and Alexei Shmelev, changed their names and appearances to match Vishnevsky’s balding head and goatee. Bykov used to have a full head of hair and, in an official photo on the St. Petersburg government website, looked younger than the photo on the poster.

The practice is a common tactic in Russian elections to split the vote of a leading candidate, despite the ruling United Russia party’s expected dominance. Vishnevsky told The Guardian he knew about the name changes but not the image edits.

“This is all done to disorient voters, so that they confuse the fake with the real, and instead of the real Vishnevsky they vote for one of the fakes,” Vishnevsky said. —O.O. 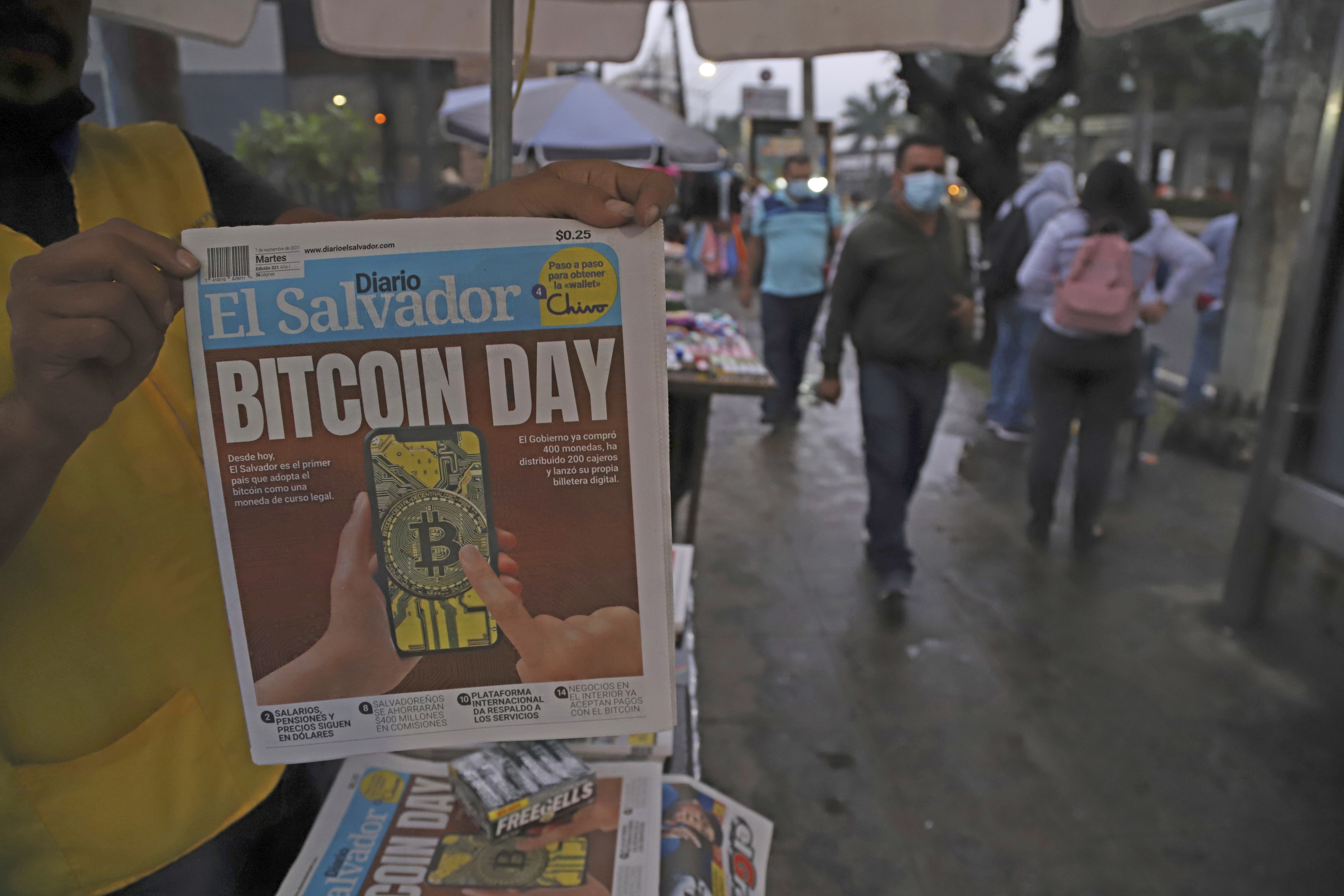 The front page of a state-run newspaper in San Salvador, El Salvador, on Tuesday Associated Press/Photo by Salvador Melendez

El Salvador on Tuesday became the first nation to make Bitcoin a legal tender despite opposition and technical glitches.

President Nayib Bukele on Monday said the country has bought its first 400 bitcoins, and plans to purchase more. But shortly after launch on Tuesday, the digital wallet used for transactions stopped functioning. Bukele said the Chivo digital wallet disconnected while the server capacity was increased.

The government said it will install more than 200 bitcoin teller machines across the country and promised $30 in the currency for each person who adopts it. Back in June, El Salvador’s parliament passed a law authorizing use of the cryptocurrency as well as the U.S. dollar for all goods and services across the country.

In El Salvador’s Central American University survey of 1,281 people, only 4.8 percent understood cryptocurrency and how it works. More than 68 percent said they disagreed with making Bitcoin legal tender. —O.O.

After two years of preparation, France began the largest trial in its history this week.

The trial, scheduled to span nine months, involves 20 suspects. Fourteen will be present, while six others will face trial in absentia. The special criminal court will hear from the police, victims, officials, and relatives of the attackers. Saleh Abdeslam, whom prosecutors say is the only surviving attacker and key defendant, has so far refused to speak with investigators. Victims can access a secure audio link to listen to the trial from home. The legal process is slated to end in May 2022. —O.O.