The Democratic Party makes an appeal to nonreligious voters

After 81 percent of white evangelicals voted for Donald Trump in the 2016 presidential election, Democrats are courting the votes of the decidedly unreligious. The Democratic National Committee passed a resolution at its annual summer meeting in late August celebrating the values of “religiously unaffiliated” Americans, praising nonbelievers for supporting “rational public policy based on sound science and universal humanistic values.”

But when it comes to religious voters, the resolution exposes a weakness for Democrats. To regain the ground the party lost in 2016, some Democratic presidential candidates are seeking to woo religious voters on the left by talking about their faith on the campaign trail and hiring faith outreach staff.

People who identify as atheists, agnostics, and “nothing in particular” made up about 35 percent of Democratic primary voters in 2016, according to the Cooperative Congressional Election Study. Out of the remaining 65 percent who reported having some kind of religious affiliation, 31 percent identified as white Christians, 22 percent as nonwhite Christians, and 12 percent said they were Jewish, Muslim, Hindu, or “something else.”

“Democrats are in a really tough spot,” Ryan Burge, an assistant professor of political science at Eastern Illinois University, told me. “Democrats are stuck between trying to appeal to the old Christian base but [with a] growing number of ‘nones.’”

The number of “nones,” or Americans with no religious affiliation, has grown from less than 1 in 10 in the 1970s to about a quarter of the population today, according to the Pew Research Center.

According to the Secular Coalition for America, no major political party has explicitly embraced nonbelievers until now. But the Democratic Party’s resolution seems to go a step further, taking a shot at religious conservatives. It says some religious demographics have used “misplaced claims of ‘religious liberty’ to justify public policy that has threatened the civil rights and liberties of many Americans, including but not limited to the LGBT community.”

Ken Blackwell, a senior fellow at the Family Research Council, told me the effort shows “the DNC is continuing its longstanding effort to run God and faith out of the public square and to create new constitutional rights whole cloth.”

And the move could cost Democrats in the long run.

“If you’re a Democratic religious none … the fact you’re getting acknowledged is a good thing,” Burge said. “If you’re an old school Catholic or mainline Protestant, this might be the opposite for you. This actually might turn you off as another example of, ‘Oh these liberals don’t care about Christian values anymore but are catering to the fringe of the party.’”

Burge gave the example of Democratic front-runner Joe Biden rescinding his yearslong support for the Hyde Amendment, which prevents taxpayer dollars from going toward abortion, as a clear sign that Democrats are not trying to court the moderate Christian vote. Burge noted the shift could win over liberal primary voters but might end up hurting the party in the general election: “You can’t go back on it now … when you spent the last year trying to appeal to activists on your side.” 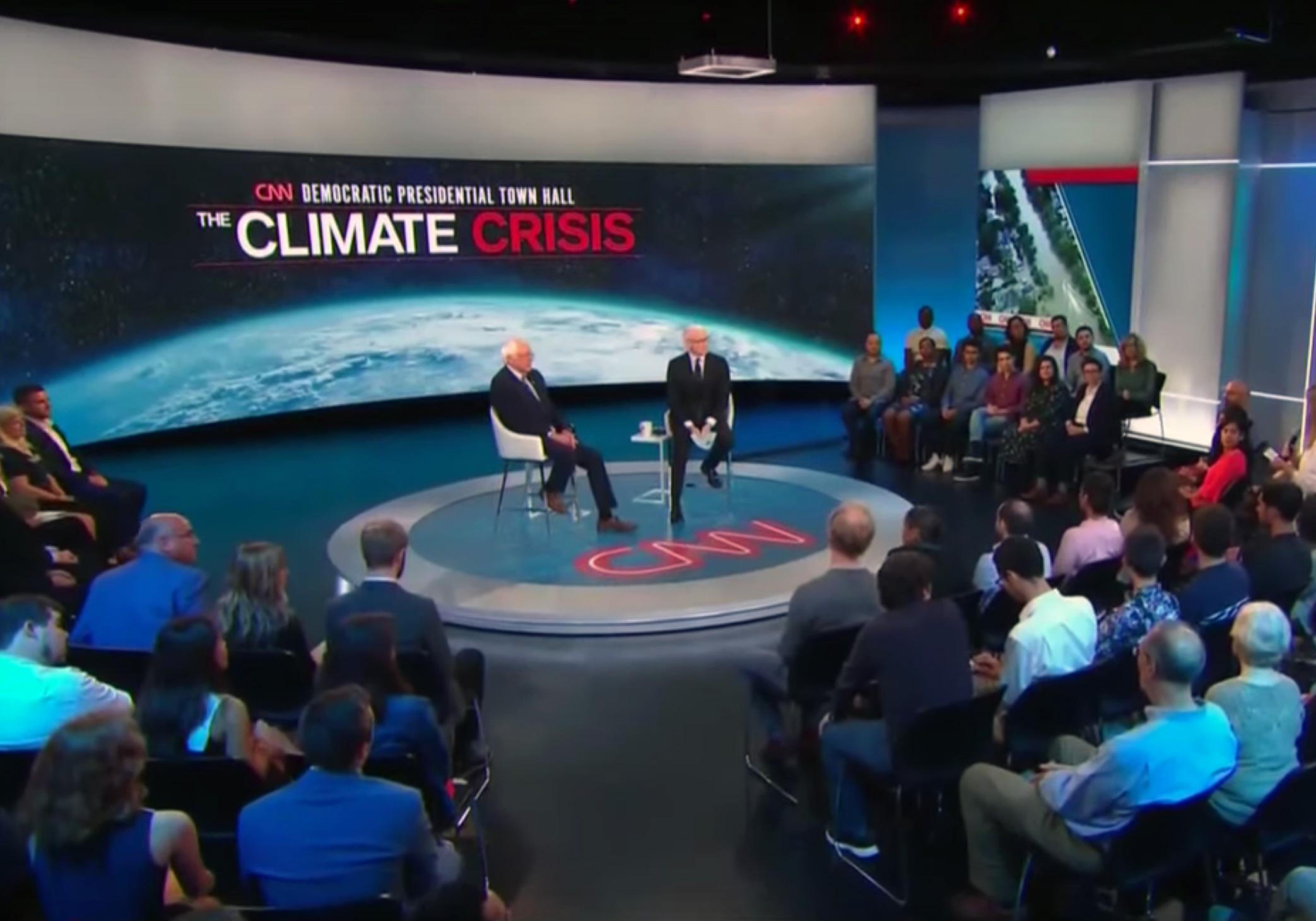 Nearly all of the candidates proposed some version of a plan to achieve net-zero carbon emissions in the United States by 2050. Everyone endorsed rejoining the Paris climate accord, putting millions of dollars toward researching clean energy, developing carbon-capturing technologies, and supporting public transportation. Some also endorsed a carbon tax.

While the candidates universally demonized fossil fuels, they diverged at times on how to discourage their use. Sen. Bernie Sanders, I-Vt., endorsed a full ban on hydraulic fracturing, or fracking, for natural gas production, while Sen. Amy Klobuchar, D-Minn., opposed outlawing natural gas because it is “better than oil.”

Front-runner Joe Biden found himself on defense when confronted about his plans to attend a fundraiser the next day hosted by Andrew Goldman, a co-founder of a natural gas company. Biden said Goldman is “not a fossil fuel executive.”

CNN and the Human Rights Campaign announced Thursday they will co-host another marathon town hall on Oct. 10 with Democratic candidates on LGBT issues. Ahead of that is the third Democratic debate, scheduled for Sept. 12 on ABC and Univision. —H.P. 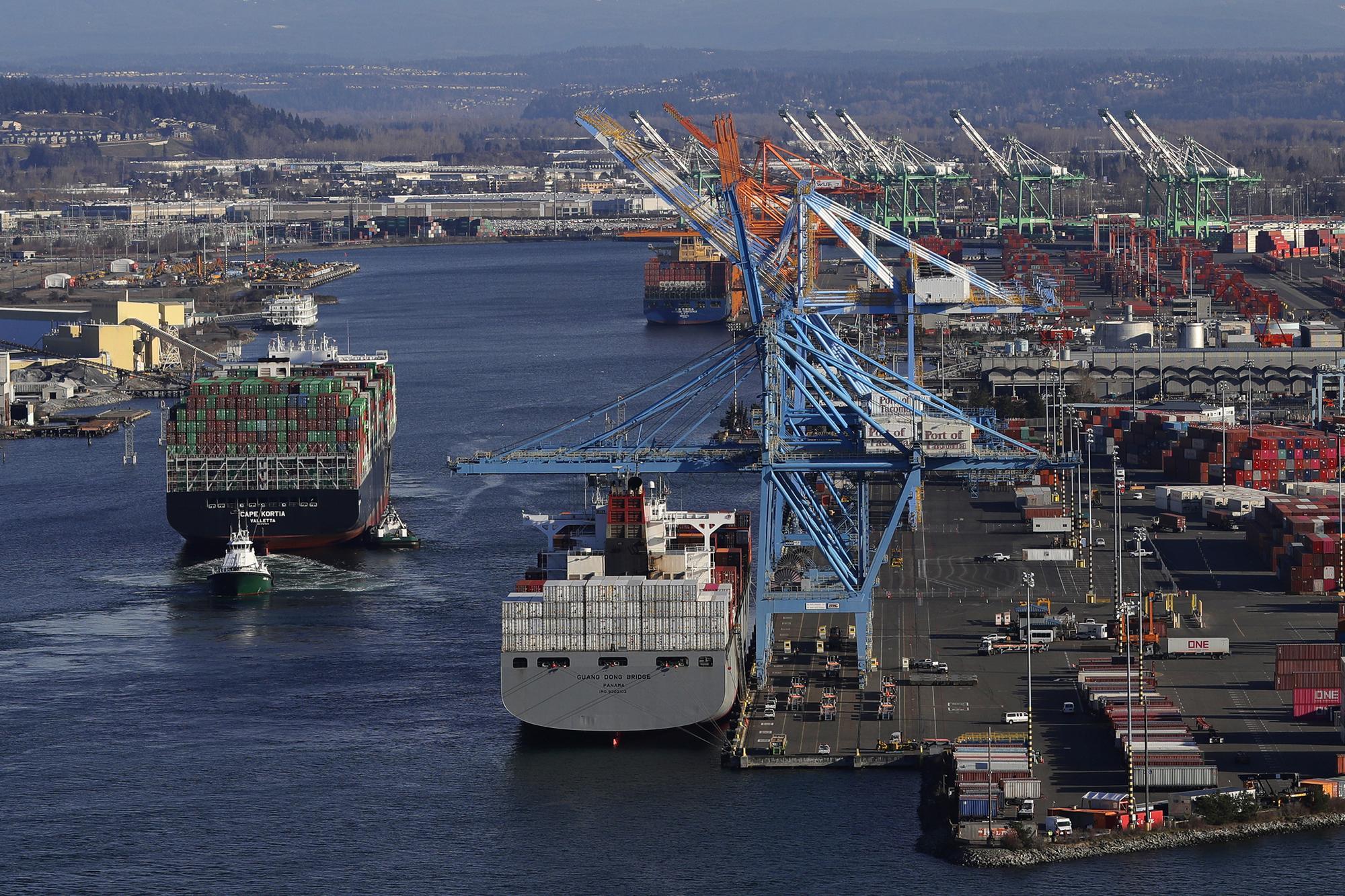 The U.S. trade deficit with its overseas partners has grown since President Donald Trump took office in 2016 despite his promise to address the issue.

The gap between what the United States sells to and buys from other countries hit a record high in December 2018. Despite some month-to-month dips, data from the U.S. Department of Commerce shows that from 2016 to 2018, the trade deficit grew from $503 billion to $628 billion. A report released Tuesday by Axios found that the United States has increasingly purchased more than it has sold among 10 of its 15 biggest trading partners since 2016. In China, the deficit has grown by 23.3 percent. The report notes the gap has shrunk between the United States and some countries, such as India and South Korea.

The president recently announced an additional round of tariffs on Chinese imports worth $300 billion. China retaliated by slapping tariffs on U.S. goods worth about $75 billion.

Chinese authorities announced Thursday that trade talks with the United States will resume in October. The Trump administration has said for months it is working to reach a trade deal with China that will lead to more equitable market exchanges. —H.P.

The Pentagon plans to delay or suspend 127 military construction projects to free up $3.6 billion to build a wall along the U.S. southern border, the U.S. Department of Defense announced on Tuesday. Defense officials said they would only delay the construction projects, not cancel them. About half of the money would come from projects abroad and the other half from domestic plans.

In February, President Donald Trump issued a national emergency declaration to fund the border wall after he failed to convince Congress to allocate money for it. The fight caused a partial government shutdown. The president used executive action to appropriate $8 billion total for the wall and earmarked $3.6 billion from military construction funds.

Earlier this year, some states challenged whether national security justified Trump’s executive action, but the Supreme Court ruled he had the right to proceed. Senate Minority Leader Chuck Schumer, D-N.Y., tweeted Monday that the reallocation of funds “is a slap in the face” to those in the military. —H.P.