Public acceptance has increased, but the dangers are the same

While running for president in 1992, Bill Clinton famously told a candidates’ forum that he had tried marijuana—but hadn’t inhaled—while studying at Oxford University. “I tried it a couple of times. I literally didn’t like it and never tried it again,” he said.

The confession made viewers gasp and prompted a conversation on whether someone who had experimented with drugs should be permitted to run for office. Thirty years later, things have changed, and sitting U.S. senators are arguing for the decriminalization of marijuana use.

In 2001, when Clinton left office, about 34 percent of Americans supported the federal legalization of cannabis, according to a Gallup poll. Now, that number is about 68 percent. Meanwhile, the number of adults who say they have experimented with marijuana has stayed roughly the same. In 1992, almost half of all Americans under the age of 45 had used the substance, The New York Times reported. Thirty years later in 2022, Gallup reported that 46 percent of adults between the ages of 18 and 54 said they had tried cannabis.

Senate Democrats are hoping the once-scandalous issue will give them a boost at the ballot box as a policy platform.

Citing a growing public mandate to address cannabis policy and its widespread use, a group of six U.S. senators called on President Joe Biden earlier this month to revoke the drug’s status as a “Schedule I substance,” a change that would effectively decriminalize marijuana use at the federal level.

Should Biden’s Department of Justice follow through with the request, it would relax federal pressure in states that have legalized marijuana—a move that could be popular with cannabis supporters, who make up an increasing proportion of the electorate. In the short term, little would change for average marijuana users, but in the long term, a nationwide cannabis marketplace could worsen an epidemic of drug use, especially among youth.

The Democratic senators who wrote to Biden—Cory Booker, Kirsten Gillibrand, Ed Markey, Bernie Sanders, Elizabeth Warren, and Ron Wyden—and are tapping into a topic that politicians on both sides of the aisle have shied away from in the past. Morgan Fox, a cannabis policy expert and political director at the pro-marijuana group NORML, said the letter was strategically timed as a signal to voters on the topic.

“This has been an issue for a while, and I think politicians are starting to realize that by supporting cannabis policy reform they can actually help themselves at the polls,” he said.

Recent investigations in California have unveiled under-the-table cannabis deals cut at the state level for millions of dollars. But known political contributions on behalf of cannabis groups remain modest. According to Open Secrets, the top seven political contributors in the cannabis industry put out only $164,075 from 2021 to 2022—a mere fraction of individual donors like the National Rifle Association or Planned Parenthood in the same window of time. That could change if cannabis becomes legal at the federal level, creating an incentive for the industry’s interests to be represented in Washington, D.C.

At the federal level, marijuana is currently classified as a Schedule I substance alongside narcotics such as heroin and LSD under the 1970 Controlled Substances Act. By that standard, cannabis is considered “a drug with no currently accepted medical use and a high potential for abuse.” Its sale and cultivation is punishable by as little as a $1,000 fine to up to life in prison and a $1 million fine depending on the amount in question.

The federal government could prosecute anyone using cannabis whether for recreational use or for medicinal purposes. But last year, during which licensed sales for cannabis exceeded $25 billion nationwide, the government prosecuted less than a thousand cases. According to the 2021 Annual Report and Sourcebook of Federal Sentencing Statistics, Marijuana made up 5.7 percent of federal drug cases with 996 cases last year, the vast majority of which never went to trial. Fox said the federal government has little to no appetite to prosecute marijuana users. When federal cases are opened, they are usually in connection with some other crime. Most of the time, defendants will cut a plea deal, which greatly reduces jail time.

“If someone is on federal land or on a national park, they can easily be charged with a federal crime especially if there’s a really egregious violation of federal law or things involving trafficking or connections to transnational drug organizations and things like that,” Fox said. “But in general [federal prosecutors] don’t get involved in most low-level cases.”

It’s a different story in states.

“Even if cannabis was removed from the schedule of controlled substances tomorrow, that wouldn’t make it legal in states where it’s still illegal,” Fox said.

Jonathan Wall, a 27 year old Maryland native, has already spent two years at the Chesapeake Max Security Detention Facility in Baltimore before his sentencing hearing. He faces a 10-year minimum sentence for running a coast-to-coast marijuana distribution operation, a penalty that could be extended to life behind bars.

With proper licensing, selling marijuana in Maryland isn’t a crime and hasn’t been since 2017. Medical marijuana in the state is a $600 million–dollars-per-year business, according to the Maryland Medical Cannabis Commission.

“The federal government can arrest people under federal law, regardless of what state laws may be … even in states where its use is completely legal,” Fox told me. “It happens a couple thousand times a year.” 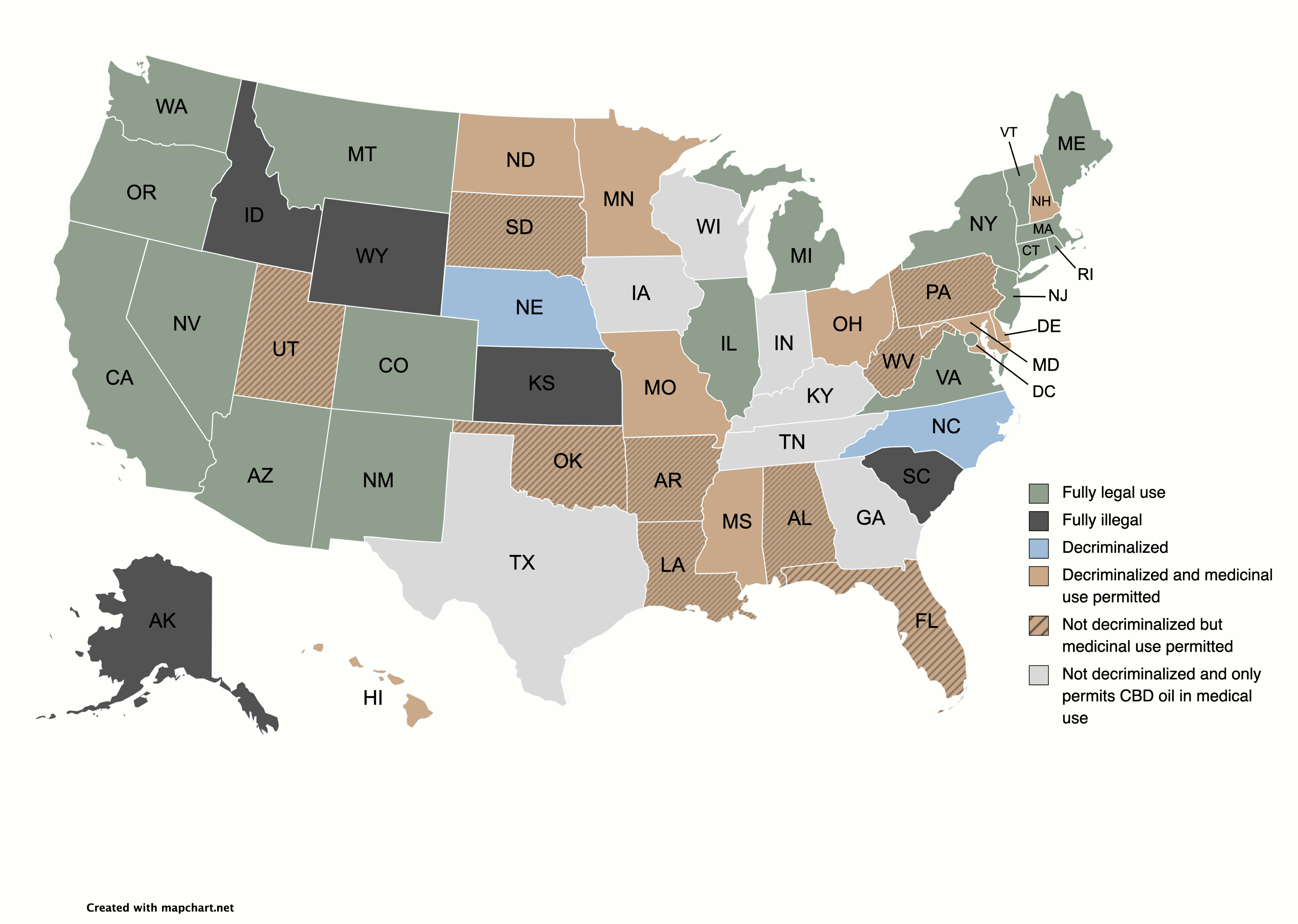 Lt. John Nores, a former game warden and a chief architect of California’s tactical Marijuana Enforcement Team, has spent his career wrestling with the black market for marijuana. Normally, game wardens make sure hunters and fishers respect wildlife rules and regulations, as well as protect the environmental integrity of the land. And although Nores does those things, he’s often had to do it by strapping on a bulletproof vest and a loaded rifle to confront cartels operating illegally out of the foothills of California. They steal water, poison the land, and endanger local communities all while turning millions in profit. It’s a conflict he calls the “hidden war” happening in America’s backyard.

Nores argues that legalizing marijuana and regulating the market for it would go a long way toward cutting down room for a black market and the cartels that operate them.

“It would take years and years for it to get implemented,” Nores said, “but the bottom line is you would take out 80 to 90 percent of cartel incentive. Without the federal government backing [legal marijuana], we incentivize a very destructive black market … and that’s going to continue.”

Scott Chipman, the vice president of Americans Against Legalizing Marijuana, is concerned that the removal of schedule I classification could result in a climb in use. For Chipman, that’s the heart of the issue. He’s specifically concerned about developmental implications for younger users.

“When the pot runs out there are very often other drugs or pills available, and when someone is high on pot, they are not likely to make a smart decision about the next drug they are being offered,” Chipman said.

For youth dealing with mental disorders, depression, or self-harm tendencies, a 2021 study found that cannabis was closely tied with an increased risk of “nonfatal self-harm, all-cause mortality, and death by unintentional overdose and homicide.”

Misuse by youth is one thing—misuse at scale is an entirely different one, Chipman said. He pointed to California as an example.

“California passed [The Adult Use of Cannabis Act] nearly 25 years ago and the regulation has gotten worse every year since,” he said. “The black market has gotten bigger, the potency has gotten stronger, the use among teens has increased, the criminal activity and corruption has increased. Even the L.A. Times, which endorsed [adult use], has written about the total failure of regulation in California.”

With under two months until the midterm elections, many Democrats look to Biden to use the issue to the party’s advantage. Although he expressed support for the legalization of cannabis on the campaign trail in 2020, Biden and the White House have made no formal response to the senators’ letter.

Leo is a graduate of Patrick Henry College. He reports on politics from Washington, D.C.