Inside the outbreak: On the streets

COVID-19 upends the way ministries care for the homeless

Seattle’s Union Gospel Mission used to have open doors with people moving in and out, but now it has checkpoints at every entrance. People going in have to stop and disinfect their hands, and a worker checks everyone’s temperature as they enter. Staff, volunteers, and even guests at the homeless shelter have learned how to identify symptoms of COVID-19, the disease caused by the new coronavirus.

But Terry Pallas, UGM’s chief program officer, said the mission has had to make even bigger adjustments than changing its safety procedures: The outbreak has forced it to change its mindset toward serving the more than 11,000 homeless people living on the streets in and around Seattle.

“Usually, we’re trying to get as many people in off the streets as possible,” he said, noting that now they have to limit the number coming in. “It feels very counterintuitive for our staff. It’s been 88 years that we’ve been helping those that are helpless and hurting on the streets. And it’s always been, how can we serve more? It’s been difficult to shift that.”

Almost half of the more than 6,500 COVID-19 infections in the United States are in Washington state. The nationwide death toll climbed to close to 120 by Wednesday afternoon. As the pandemic continues to turn American life upside down, the homeless stand at a unique crossroads of risk factors. They already struggle with basic sanitation measures like regular hand washing. Many of them are older: In 2015, the U.S. Department of Housing and Urban Development estimated about 20 percent of homeless people were over 50. Living on the streets brings a barrage of health risks, meaning homeless people have many of the “underlying conditions” health officials have warned increase the risk of death from COVID-19. And social distancing carries heavier consequences for the homeless, and many of them don’t have a way to follow directives like those in the Bay Area of Northern California to stay inside.

While none of UGM’s guests or staff have tested positive, at least one identified case of the virus occurred in a homeless person who broke quarantine by leaving a motel set aside for coronavirus cases in Kent, Wash.

Pallas said staff had to implement unprecedented policies and procedures “on the fly” to safely serve more than 800 people a night. The staff talks to local officials two or three times a week to get updates. In addition to spreading out beds, the shelter started serving breakfast and dinner as takeout and handing out sack lunches. The organization stopped sending staff out to the streets to actively look for the homeless. And workers are putting together a plan in case officials quarantine the shelter.

To try to shelter more people while maintaining the needed social distance, the mission opened overflow locations throughout the city. Now it has to staff and equip those new sites. And it has fewer people available than usual. Many staff and volunteers—those with health problems or who are pregnant or older—are working from home or are shut-in completely.

Many of the homeless are staying away from shelters, where they would come in contact with more people, Pallas said. Workers who interacted with the homeless on the streets brought back reports earlier in the outbreak of people staying isolated in their tents and recreational vehicles despite the cold temperatures and snow that fell in Seattle over the weekend. But Pallas said, despite the difficulties, the self-sacrifice and support from workers and the local community encouraged him.

“The churches have been amazing,” he said, explaining that many followed through on opening their buildings for overflow shelter space even as they canceled Sunday services. Other pastors, Pallas noted, contacted him to ask how they could pray and support the ministry.

UGM employees have run to the front lines, and many quickly raised their hands and volunteered to staff quarantine centers if necessary, he said.

“We’ve just started recognizing the valor and the courage of certain staff members that, like first responders, are running toward the need, running toward the danger, and serving those on the front lines,” Pallas said. “So while this thing is really scary and uncertain for a lot of people right now, I think that through that we’re going to see a great number of stories come out of the ashes, and come out of this, that are beautiful and inspiring.” 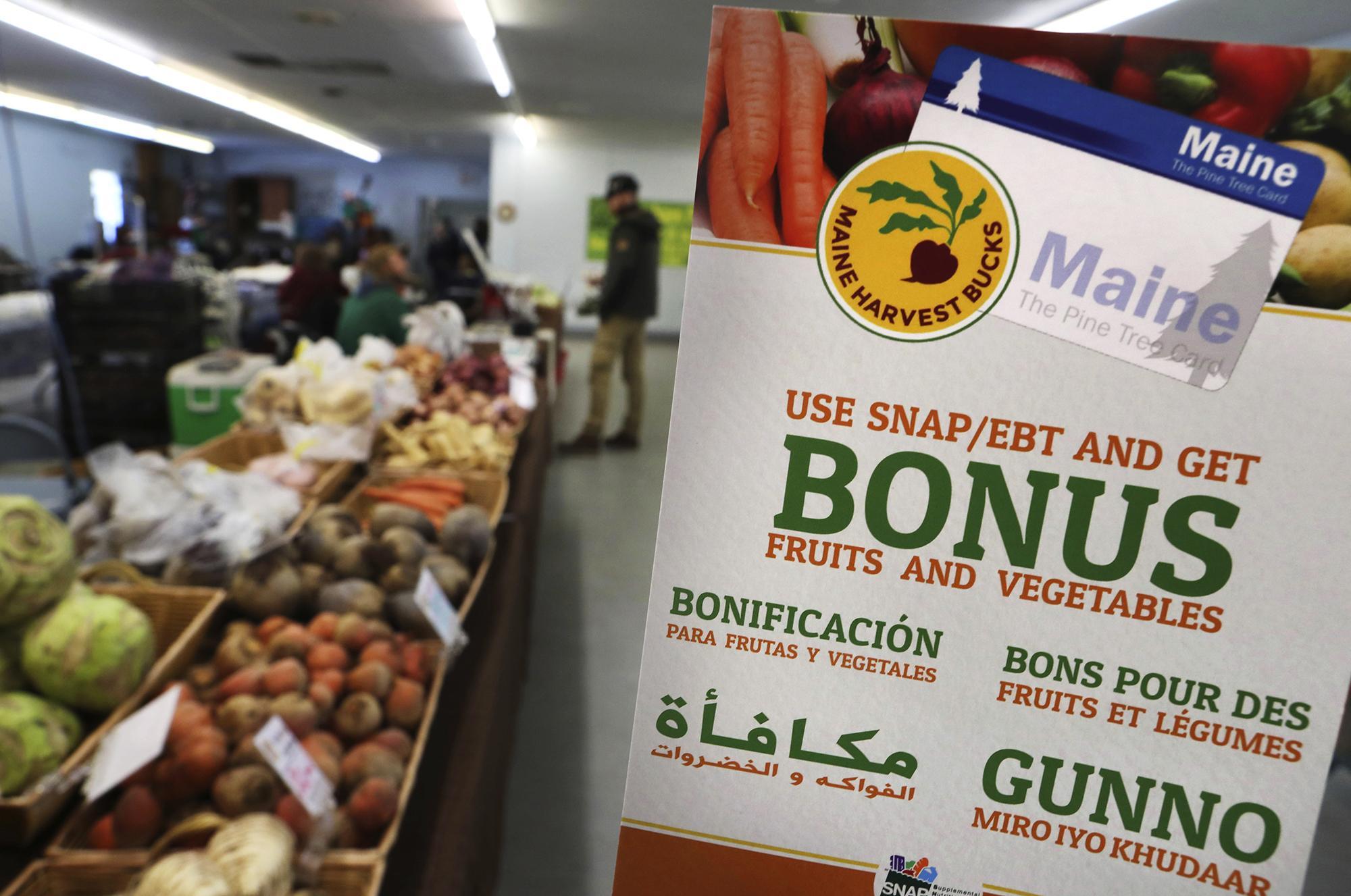 A sign at a farmer’s market in Topsham, Maine, that accepts food stamps. The market is currently closed for the winter. Associated Press/Photo by Robert F. Bukaty (file)

The economic relief package passed by Congress on Wednesday would put on hold controversial changes to the federal food stamps program. The Trump administration planned to implement a rule on April 1 that would have required more able-bodied adults who did not have dependents to work 80 hours a month to participate in the Supplemental Nutrition Assistance Program for more than three months in a three-year period.

On Friday, a federal court temporarily blocked the rule from taking effect in light of the coronavirus epidemic and because “aspects of the final rule are likely unlawful because they are arbitrary and capricious,” Chief Judge Beryl A. Howell of the U.S. District Court in Washington, D.C., wrote. Then on Wednesday, the U.S. Senate passed a bill that gives states the right to continue waiving the work requirements as needed during the COVID-19 outbreak. President Donald Trump is expected to sign the bill into law.

Many low-income Americans work in retail, food service, and hospitality jobs—the economic sectors most affected by the pandemic. —Charissa Koh

A day in court on screen

Last week, immigrant children detained in Houston had hearings via video conference call before Assistant Chief Immigration Judge Sirce Owen in Atlanta. Owen and the children saw each other on screens, and interpreters communicated for them through a rough audio feed. Technical glitches delayed the proceedings.

Immigration courts are increasingly using video for children’s hearings. Some states, including New York, Tennessee, and Virginia, already use this technology for children detained far away from a courthouse. Video hearings could reduce costs and provide flexibility in processing the backlog of immigration cases, but advocates warn they could lead to worse outcomes for children. Gladis Molina Alt with the Young Center for Immigrant Children’s Rights described the feel in courtrooms that use video conference calls: “They were just images on a screen as opposed to children whose lives were being impacted by the decision that was being made in court.”

A growing number of people are calling for immigration courts to stop in-person trials to prevent spreading the new coronavirus. Over the weekend, the U.S. Department of Justice canceled preliminary hearings for non-detained illegal immigrants, but all other hearings will continue. —C.K.