A church in Shaforon, Nigeria, that was bombed in an attack by Fulani herdsmen Facebook/U.S. Nigeria Law Group

The attack razed several villages in the southern part of the state, and a military jet bombed a Lutheran church and other targets, witnesses said. Ahmed Sajoh, the state commissioner for information, earlier said the government deployed military aircraft in response to the attack. “We are also aware that the Nigerian Air Force commander has mobilized fighter jets, and got all the necessary approvals to give air support to the ground troops,” he said. Some people suspect the jets were deployed in collaboration with the terrorists because their bombs hit villagers.

Zenald Zidon Love, chaplain of Unity Chapel in Adamawa’s capital, Yola, said the initial fighting began after some herdsmen raped and killed a pregnant woman on her farm in the region’s Numan community. He said the attackers also killed her husband and brother when they tried to intervene. Several community members staged a counterattack on the herdsmen, and they responded with the Dec. 4 ambush on the Numan and Demsa communities. “The people were killed and their places destroyed,” Zidon said.

The Rev. Stephen Mamza, chairman of the state’s branch of the Christian Association of Nigeria, said he’s received word that more than 100 people died, but the actual number remains unconfirmed: “There are people still missing and we are not sure where they are.”

Violent clashes persist between herdsmen and farmers across Nigeria. The 2017 Global Terrorism Index released by the Institute for Economics and Peace said the conflict, worsened by droughts, erratic rainfall, and land degradation, killed an estimated 60,000 people since 2001 in Nigeria alone. In southern Adamawa, Zidon said the herdsmen attack regularly, especially during the harvest season.

Hebron Nzonzo, who fled during the attack, told Nigeria’s Punch news site the attackers burned down about five villages in the communities and bombed some of the locations: “These villages have come under bombardment from Nigerian Air Force fighter jets in Gyawana and Shaforon, which were bombarded twice.”

Felix Samari, communications officer of the Lutheran Church of Christ in Nigeria in Adamawa, confirmed the attack bombed the church in Shaforon. Photos from the scene showed the church with its roof missing and signs of ash and fire in the building. Other images showed houses burned down within the community.

Nigerian Vice President Yemi Osinbajo condemned the attack during a visit to the communities. He met on Monday with several northern leaders in the capital city, Abuja, to discuss the persistent killings and clashes between herdsmen and farmers.

In a statement, Mamza said several policemen died in the attack but warned that people are losing confidence in the government: “Local communities had precisely and concisely sighted well-armed killers in different locations over the past days and had reported to the security agencies, but no one listened to them.”

Since the attack, Zidon said different church leaders came together to assist the affected people. He sent three trucks of water from Yola to the communities, and another pastor raised funds to send food. “We’re going beyond the boundaries of denominations,” he said. 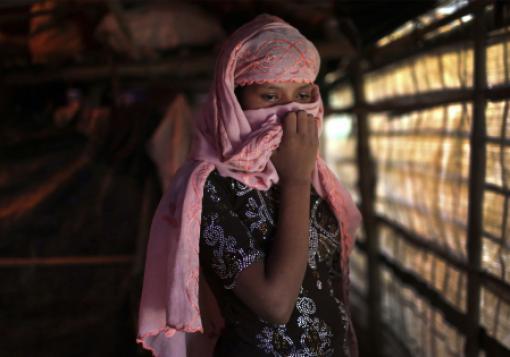 This Rohingya Muslim refugee, in a camp in Bangladesh, says Myanmar military members raped her. Associated Press/Photo by Wong Maye-E

More tales of rape against the Rohingya

Myanmar security forces raped Rohingya women and girls as young as 13 in a sweeping and methodical process, The Associated Press said in a report with the Pulitzer Center in Crisis Reporting.

The group spoke with 29 women and girls from Rakhine state in Myanmar, also known as Burma, who are now staying at refugee camps in Bangladesh. All of the women, except one, said their attackers wore military-style uniforms. The other woman, whose attackers wore plain clothes, said her neighbors recognized them from the local military outpost. Several women detailed how the security officials slaughtered their children in front of them and shot their husbands before raping them.

Rohingya militants in August attacked Myanmar security forces in Rakhine state, and government forces responded with what the United Nations termed “ethnic cleansing.” The military has so far denied the accusations. An internal military investigation into the rape allegations last month concluded none of the assaults occurred.

One of the women, identified only as F, narrated how the security forces raped her in front of her husband of one month before shooting him. They continued to rape her before dragging her outside and burning down her house. The 22-year-old woman became pregnant and moved in with her neighbors. Three months later, two security officials raped her again. In another case, four security officials raped a nine-months pregnant woman. The women narrated how they walked in searing pain to Bangladesh, where only a few of them received treatment.

F said she believes God kept her and her baby alive for a reason. “If I give this baby away, what will I have left,” she said. “There will be nothing to live for.” —O.O. 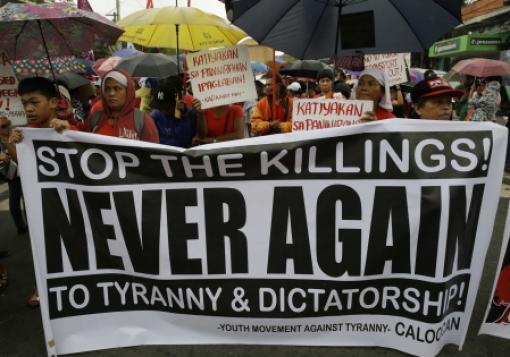 This Rohingya Muslim refugee, in a camp in Bangladesh, says Myanmar military members raped her. Associated Press/Photo by Wong Maye-E

Recent murders of religious leaders in the Philippines prompted fears the government may be behind the shootings. Catholic missionaries say they fear getting swept up in a crackdown on leftist groups that the government has designated as terrorist organizations.

Activists and clergy who have criticized President Rodrigo Duterte’s authoritarian measures met Dec. 3 to prepare for the crackdown, UCA News reported. On Dec. 4, unknown gunmen shot retired priest and human rights activist Marcelito “Tito” Paez, a member of the Rural Missionaries of the Philippines (RMP). His killers remain unidentified, and no criminal groups took responsibility, causing some to suspect the government. Paez had just helped secure a political prisoner’s release.

“We never thought it would hit us so close to home, so fast,” the Rev. Oliver Castor of RMP told UCA News.

Gina Goh of International Christian Concern said other actions by the government and police make suspicions of their involvement in the killing “reasonable.”

Duterte declared NPA a terrorist group along with the Communist Party on Dec. 5. His government also threatened to target legal activists suspected of conspiring with underground groups. —Julia A. Seymour

Approximately 137 children in urgent need of medical attention remain stranded in Syria’s rebel-held suburb of East Ghouta, the United Nations children’s agency said. East Ghouta, located about six miles outside Syria’s capital, Damascus, is one of the last remaining rebel-held areas. Rebels seized control of the region in 2013, and it remains largely cut off from aid. The UN said five children already died from lack of medical care and 137 children—some as young as 7 months—need evacuation for conditions ranging from kidney failure to severe malnutrition. Nearly 12 percent of children younger than 5 in the region suffer from acute malnutrition, the highest rate ever recorded since the start of Syria’s civil war. “Sick children desperately need medical evacuation, and many thousands more are being denied the chance of a normal, peaceful childhood,” said Fran Equiza, the agency’s representative in Syria. —O.O.

Up to 6,000 former Islamic State (ISIS) fighters in Iraq and Syria could return to Africa, the African Union’s (AU) lead security official said in a warning. During a meeting in Algeria, Smail Chergui, the AU’s commissioner for peace and security, called on African countries to work together in intelligence sharing to counter potential threats by the extremists. Chergui said the extremists make up part of the 30,000 foreign fighters who joined ISIS in the Middle East. “The return of these elements to Africa poses a serious threat to our national security and stability and requires specific treatment and intense cooperation between African countries,” he said. Earlier Saturday, Iraq declared complete victory over ISIS. —O.O. 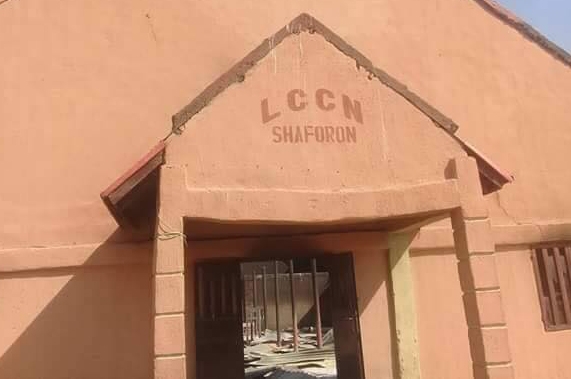 A church in Shaforon, Nigeria, that was bombed in an attack by Fulani herdsmen Facebook/U.S. Nigeria Law Group