A crowd of cheering and flag-waving supporters gathered inside the headquarters of the Social Democrats, Germany’s opposition party, on Sunday to celebrate a narrow election victory. “Many German citizens voted Social Democrats because they want a change in government,” said Olaf Scholz, the party’s candidate for chancellor.

At the more subdued meeting of Chancellor Angela Merkel’s conservative bloc, candidate Armin Laschet also claimed the right to form the ruling coalition, despite his party’s poor showing at the polls.

The competing claims set the stage for a potentially protracted battle to form a future German government as rival parties begin preparing for coalition negotiations.

The center-left Social Democrats clinched 25.7 percent of the vote during the Sept. 26 election. Merkel’s Union bloc—comprising the Christian Democratic Union and its Bavarian sister party, the Christian Social Union—landed 24.1 percent. The result was the Union bloc’s worst performance since 1949 and marks the end of Merkel’s 16-year stint as chancellor.

With the top two parties unwilling to form a coalition, the likely kingmakers are the environmentalist Greens, who traditionally support the Social Democrats, and the business-friendly Free Democrats, who lean toward the Union bloc. But it’s unclear which way they will swing. Party leaders met this week to reach common ground before accepting any offers.

Scholz, who is also the outgoing vice-chancellor, said Monday he would like a new government before Christmas. But the parties first must iron out their differences. The Greens want to raise the country’s debt limit and have backed the Social Democrats in calls for increased taxes on the wealthy. The Free Democrats instead want to lower taxes for the wealthy and for companies. The parties also disagree on housing reform and climate change.

Ulrike Franke, a senior policy fellow at the European Council on Foreign Relations (ECFR), told Deutsche Welle that regardless of how the governing coalition forms, there likely will be a certain level of continuity with the previous government. But Franke said Social Democrat leadership could prove “slightly less reliable” for NATO partners like the United States: “For the transatlantic alliance, and for Europe, there are some differences between the coalitions that maybe we can get into, but no reason to be alarmed.”

A drawn-out coalition process is not new to the continent. Lawmakers in the Netherlands’ largest parties have failed to piece together a government over the past six months. And in Belgium, Prime Minister Alexander De Croo’s government came into office on Oct. 1 last year after nearly 500 days of coalition talks.

Merkel will continue to lead a caretaker government until the negotiation process wraps up. At The Hague, Dutch Prime Minister Mark Rutte’s four-party government has remained in a caretaker position since the March 17 vote, making only essential decisions and not implementing any significant policy changes. 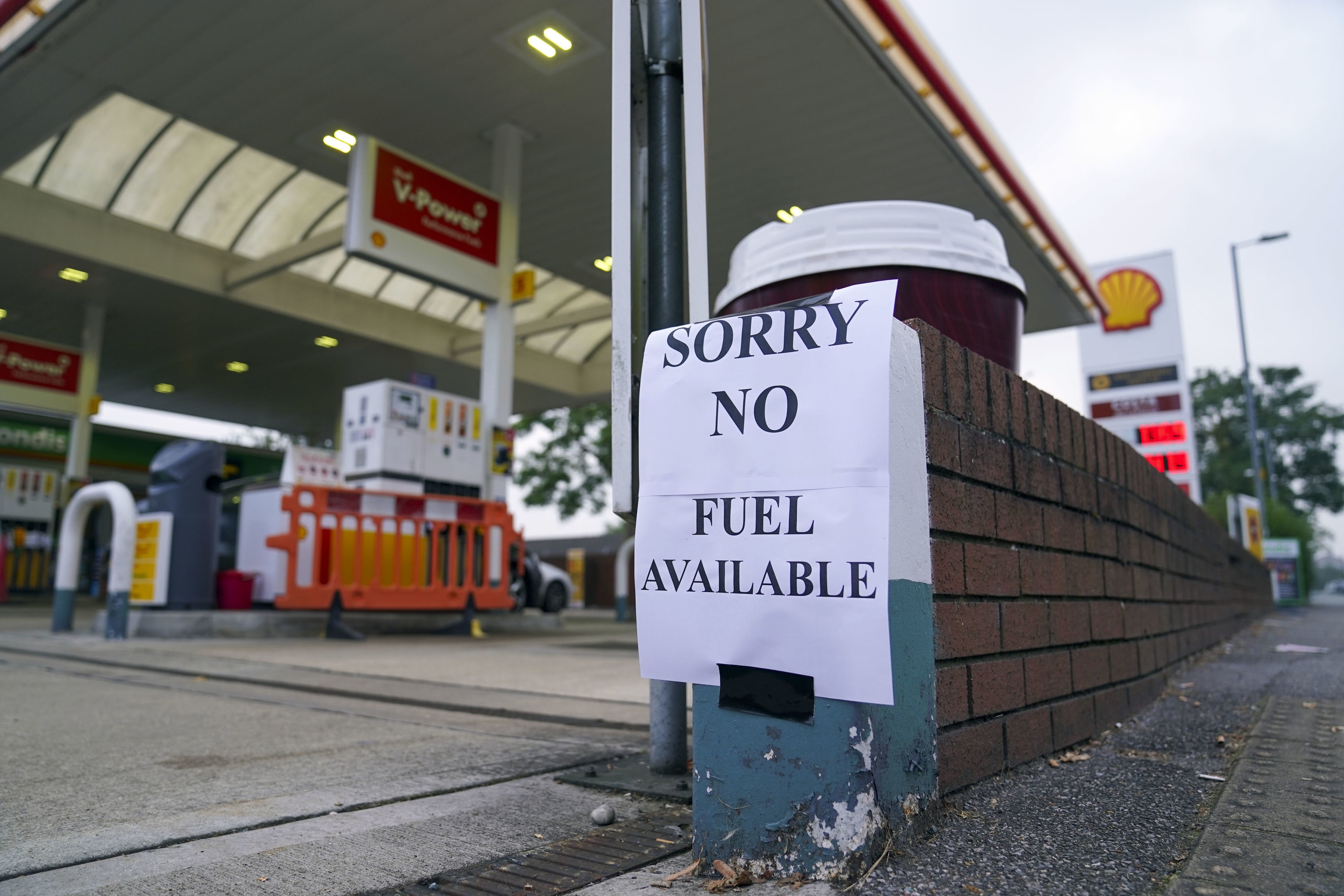 A sign at a gas station in Bracknell, England, on Sunday Associated Press/Photo by Steve Parsons/PA

Cars have formed long lines outside British gas stations since last Friday as drivers tried to fill their tanks, but some stations in London put up signs saying they were out of fuel. More people rushed to join the growing queues after BP and ExxonMobil last week announced they had closed some stations due to a growing truck driver shortage. The U.K. government is struggling to respond to the resulting supply disruptions.

U.K. fast-food chains and supermarkets have also started to report shortages in recent months. The shipping industry blames the problem on the loss of as many as 100,000 truckers due to the coronavirus pandemic, an aging workforce, and an exodus of foreign workers after Britain’s departure from the European Union last year. Several other countries, including the United States and Germany, have also reported truck driver shortages.

The U.K. government insists there is no fuel shortage and blamed panic buying. Amid mounting pressure, the government said it would issue 5,000 three-month visas to foreign truck drivers and another 5,000 for poultry workers beginning in October. Authorities suspended competition laws between fuel firms and tried to speed up the training of new truckers to ease the crunch. Business Secretary Kwasi Kwarteng said authorities deployed the government’s reserve tanker fleet on Wednesday and is mobilizing about 150 soldiers to help transport fuel. —O.O. 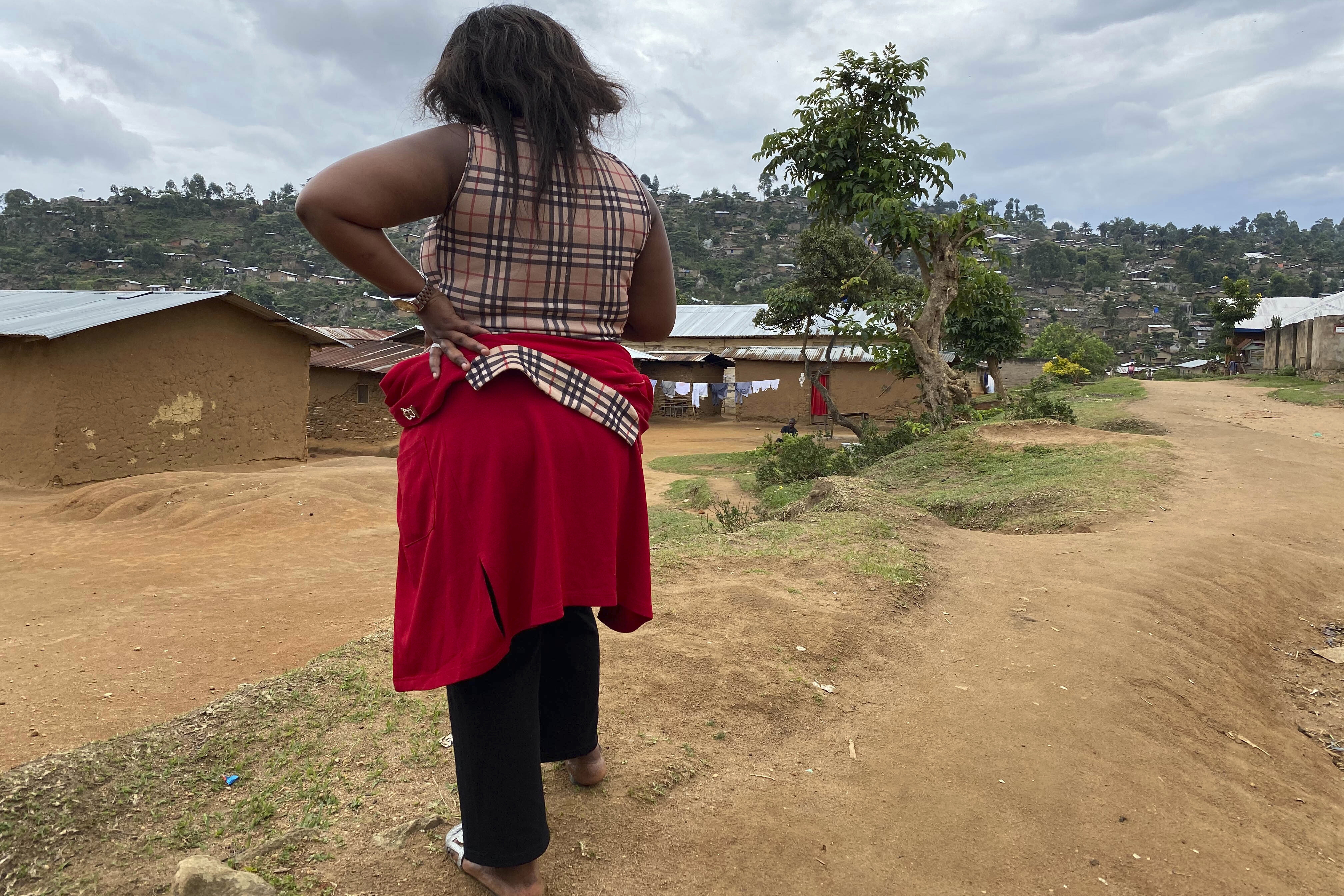 A woman who accused a WHO worker of sexual abuse near her home in Beni, eastern Congo Associated Press/Photo by Kudra Maliro (file)

WHO panel confirms abuses in Congo

A World Health Organization–commissioned report this week accused 21 WHO employees of sexually abusing people while responding to the 2018-2020 Ebola outbreak in the Democratic Republic of Congo.

The independent panel responsible for the report said it identified 83 accused perpetrators of sexual abuse and exploitation, including Congolese nationals and foreigners, but could only confirm 21 of them “with certainty.” The report said the suspected abusers include doctors, consultants, and senior staffers.

Investigators uncovered nine claims of rape, some resulting in pregnancies, panel member Malick Coulibaly said. The youngest reported victim, believed to be 13 years old at the time, said a WHO driver offered to give her a ride home from where she sold phone cards in April 2019. “Instead, he took her to a hotel where she says she was raped by this person,” the report said.

The Associated Press in May reported Dr. Michel Yao, a senior WHO official overseeing the Congo outbreak response, received reports in writing of multiple sex abuse claims but failed to act on them. He was later promoted to direct Geneva’s Strategic Health Operations Department.

WHO Director-General Tedros Adhanom Ghebreyesus called the panel’s findings “harrowing.” He said the agency has fired four people and placed two others on administrative leave. The panel recommended the WHO provide reparations to victims and schedule DNA testing to confirm paternity and pave the way for the women to seek their children’s rights.  —O.O. 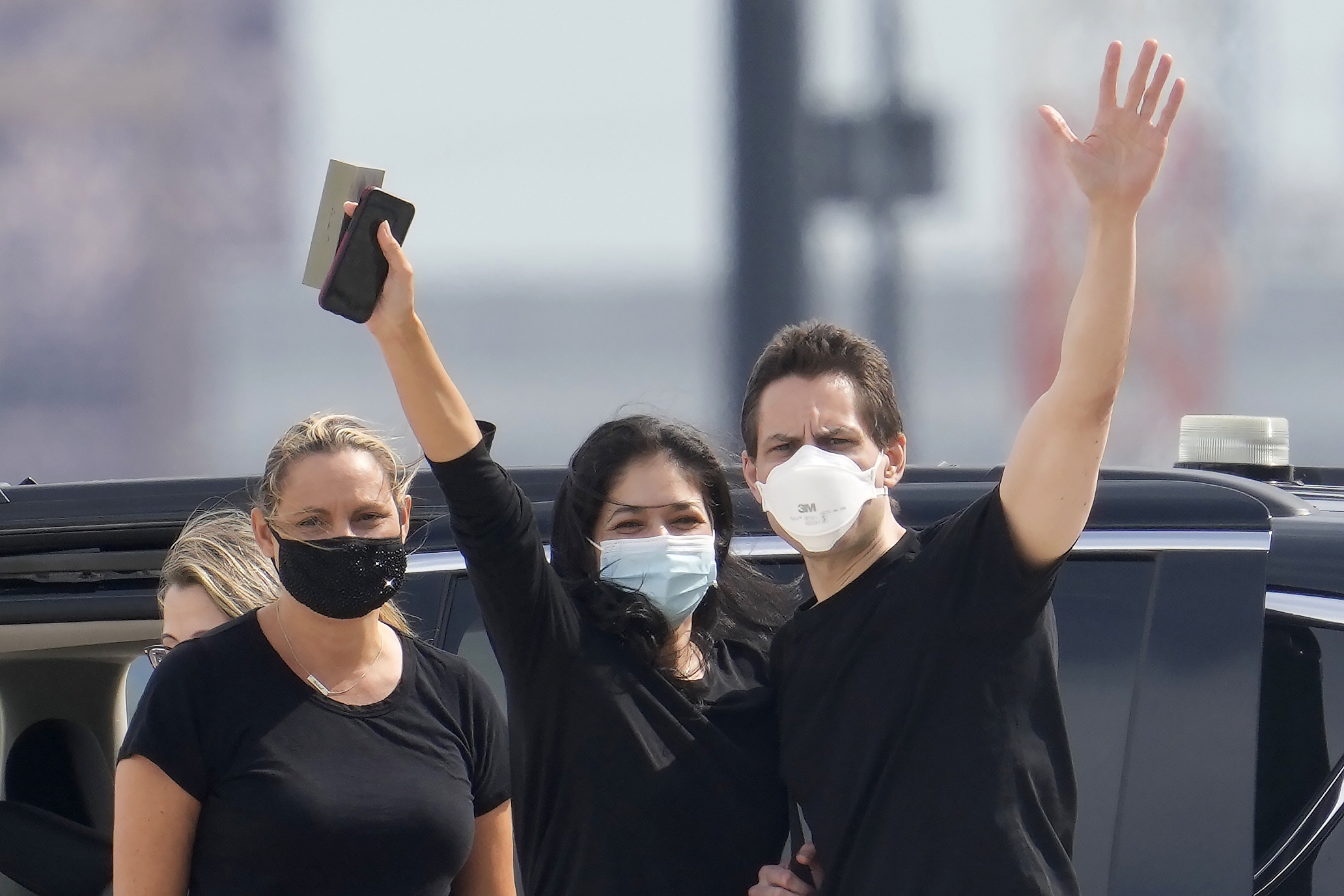 Canadian Prime Minister Justin Trudeau hugged diplomat Michael Kovrig and entrepreneur Michael Spavor after they arrived at the airport in Calgary, Alberta, on Saturday. Later that day, Meng Wanzhou, Huawei Technologies’ chief financial officer and the daughter of the company’s founder, returned to China. The prisoner swap follows a nearly three-year feud that pitted China against Canada and the United States.

Meng spent more than 1,000 days under house arrest in one of her Vancouver homes before striking a deal with U.S. prosecutors to avoid trial. Under the agreement, the United States will drop fraud charges against her next year and she will accept responsibility for misrepresenting the company’s business dealings in Iran. Hua Chunying, a Chinese foreign ministry spokeswoman, called her arrest a case of political persecution.

China accused the two Canadians of endangering national security and denied the arrests were retaliatory. Spavor faced an 11-year prison sentence on spying charges, while Kovrig had not yet received a sentence. China said it released the men for medical reasons. —O.O. 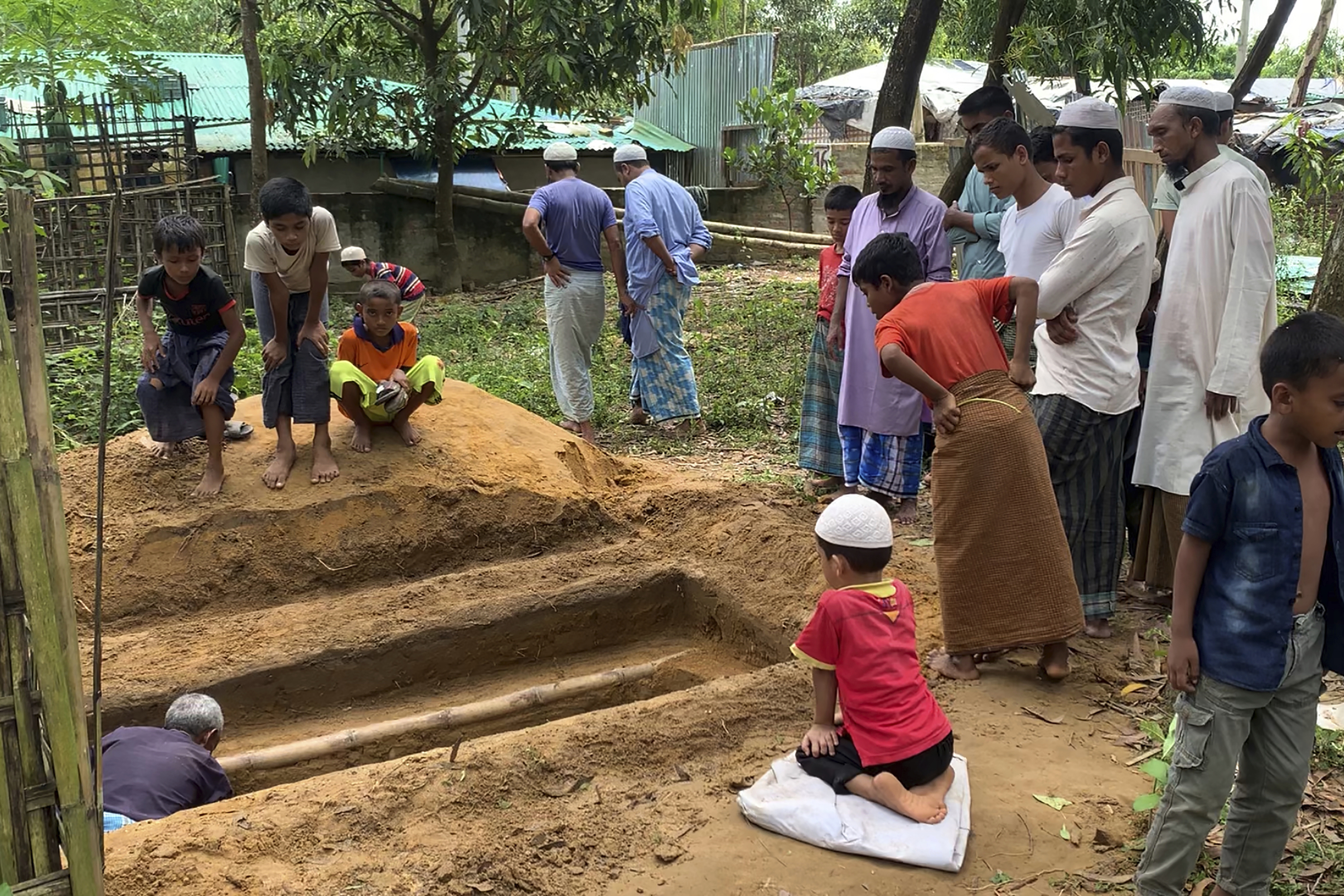 A grave for Mohib Ullah at the Rohingya refugee camp in Kutupalong, Bangladesh Associated Press/Photo by Shafiqur Rahman (file)

A gunman shot dead Mohib Ullah, a teacher who emerged as an international representative of ethnic Rohingya refugees, at Kutupalong refugee camp in Bangladesh on Wednesday, according to Naimul Haque, a police commander in the Cox’s Bazar district. Responders rushed Mohib Ullah to a hospital, where he was declared dead. No group claimed responsibility.

Mohib Ullah was one of the hundreds of thousands of Rohingya who fled into neighboring Bangladesh amid the 2017 military crackdown in Myanmar, also known as Burma. He visited the White House in 2019 to attend a religious freedom meeting, where he spoke about the suffering and persecution his people face. The same year, Bangladeshi media criticized him for leading a rally of some 200,000 refugees to mark the second anniversary of the crackdown.

Meenakshi Ganguly, the South Asia director of Human Rights Watch, in a statement called Mohib Ullah a vital voice for the Rohingya community: “His killing is a stark demonstration of the risks faced by those in the camps who speak up for freedom and against violence.” —O.O.