From playgrounds to classrooms

School choice advocates celebrated the U.S. Supreme Court’s decision in the Trinity Lutheran case as good news for programs that allow parents to use taxpayer funds for private school tuition.

Education Secretary Betsy DeVos, the nation’s most high-profile voucher supporter, said the ruling set a new standard: “Programs designed to help students will no longer be discriminated against by the government based solely on religious affiliation.”

Opponents noted the Trinity Lutheran case applied only to the Missouri playground-resurfacing program, not funds collected for public education. But two other decisions issued Tuesday suggest the Supreme Court justices believe the playground case will have a wider ripple effect.

After issuing the 7-2 Trinity decision, the justices declined to hear a challenge to a Colorado voucher program established in 2011. Instead, they asked the Colorado Supreme Court to reconsider its previous ruling against the Douglas County Choice Scholarship Program. The state’s high court ruled the Douglas County program unconstitutional because the funds aid private religious schools—essentially the same argument struck down in Trinity.

The justices also declined to hear a New Mexico case challenging a state textbook lending program that allowed religious schools to participate. They asked the state’s high court to reconsider its decision declaring the program in violation of the New Mexico Constitution. In both the Colorado and New Mexico cases, opponents cited the states’ Blaine amendments as preventing taxpayer money from being used for “sectarian” purposes. Thirty-seven other states have Blaine amendments, which have long been used to exclude churches and religious schools from a variety of government programs.

Just because the U.S. Supreme Court justices decided to kick the Colorado and New Mexico cases back to the lower courts does not necessarily mean they believe Blaine amendments should be struck down entirely. But the Trinity ruling creates an opening for that eventual possibility. At least two justices seem to believe Blaine’s prohibitions are unconstitutional.

“The general principles here do not permit discrimination against religious exercise—whether on the playground or anywhere else,” wrote Justice Neil Gorsuch, joined by Justice Clarence Thomas, in an opinion concurring with the Trinity decision. 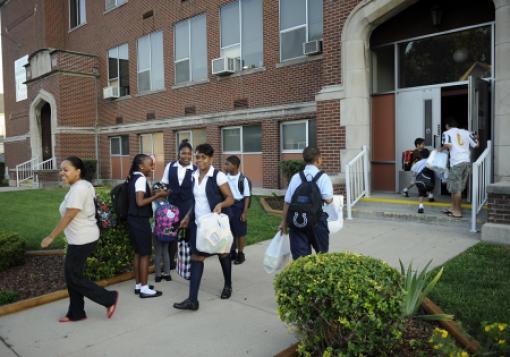 Students enter Our Lady of Hungary Catholic School for the first day of school, in South Bend, Ind. Associated Press/Photo by Joe Raymond

Two new studies on voucher programs in Indiana and Louisiana are giving school-choice advocates something to cheer about.

Both studies looked at the performance of low-income public school students who switch to private schools using state-funded vouchers. As other studies have shown, students who make the switch tend to struggle at first, falling behind their public school peers in both math and English, based on standardized test scores. But according to the new studies, students tended to make up those losses after two years.

“The longer that a student is enrolled in a private school receiving a voucher, their achievement begins to turn positive in magnitude—to the degree that they’re making up ground that they initially lost in their first couple of years in private school,” R. Joseph Waddington, a researcher from the University of Kentucky who evaluated schools in Indiana, told NPR.

Waddington and fellow researcher Mark Berends of the University of Notre Dame speculate the initial achievement gap could be due to the disruption that comes with any major school switch. They also note that students from low-performing schools have a hard time adjusting to more rigorous private school standards, especially homework expectations. Since test scores improved over time, Waddington and Berends concluded the students eventually adjusted, and so did their new schools. Learning how to teach students who come from a different background than the rest of the student body also takes time, the researchers noted.

The Louisiana study, conducted by researchers at Tulane University and the University of Arkansas, showed similar results. Local education officials celebrated the news.

“We don’t take this study as evidence that vouchers work or don’t work,” John White, Louisiana’s superintendent of education, told The Washington Post. “We take it as a promising sign that the way that Louisiana has chosen to regulate private school choice can really work.” —L.J. 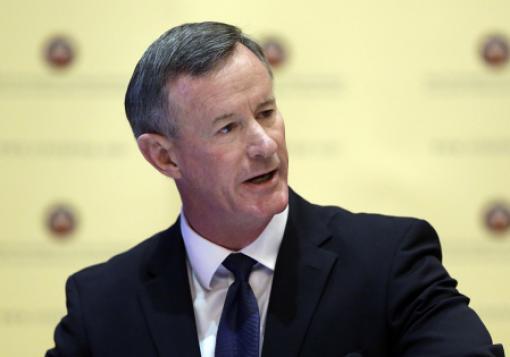 Students enter Our Lady of Hungary Catholic School for the first day of school, in South Bend, Ind. Associated Press/Photo by Joe Raymond

Good work if you can get it

The Chronicle of Higher Education released its annual survey of public college presidential salaries Wednesday, showing pay for the nation’s top educators rose 5.3 percent on average during the last year. At a time when almost everyone agrees college costs are out of control, the generous compensation packages don’t make for great publicity.

Arizona State University pays the most for its top administrator—$1.6 million. Michael Crow’s paycheck included $838,458 in base pay, an annual $150,000 bonus, and a $550,000 10-year retention bonus. The Arizona Board of Regents pointed to the university’s improved graduation rate for state residents, which has nearly doubled since 2002, as proof Crow has earned his keep.

The next two top earners came from Texas. William McRaven, chancellor of the University of Texas System, made $1.5 million, and John Sharp, chancellor of the Texas A&M University System, made $1.3 million. Two college presidents crossed the $1 million mark for base salary, a threshold public university leaders previously had not crossed. The average salary for public college presidents is $501,000.

Private universities offer much higher salaries, with the most generous in the latest survey—$5.4 million—paid to Jack Varsalona, president of Wilmington University in Delaware. Almost 40 private universities paid their chiefs at least $1 million. —L.J.

The NCAA is on Baylor’s case

Baylor University in Waco, Texas, the nation’s largest Baptist college, is under investigation by the NCAA for the sexual assault scandal that has rocked its football program. In court filings, the university’s lawyers admitted to the previously unconfirmed investigation and said the probe prevents it from handing over communications requested by women suing the university. The women claim administrators ignored their sexual assault claims, tried to cover up football players’ criminal behavior, and fostered a “culture of violence” in the football program. The resulting scandal led to university President Ken Starr’s demotion and his eventual resignation. Head football coach Art Briles, who denies covering up improper behavior, also lost his job. An outside law firm hired by Baylor to analyze what happened concluded some members of Briles’ staff had improper contact with victims and might have interfered with previous investigations. In addition to the NCAA probe, Baylor faces a criminal investigation by the local district attorney and the Texas Rangers. —L.J.

A University of Tennessee professor passed the compassion test with flying colors earlier this month when one of her students skipped class because she couldn’t find a babysitter for her 3-year-old daughter. Rather than berate Morgan King over her absence, professor Sally Hunter made a radical offer: Bring the child to class. Hunter told King she would be “absolutely delighted” to hold Korbyn while she taught. “I’m very serious with this offer—just bring Korbyn with you!” Hunter wrote in an email that went viral after King posted it to social media. When she got the professor’s message, King said she cried with gratitude. University Chancellor Beverly Davenport also took to social media to praise Hunter for recognizing the challenges some college students face and for her willingness to find a solution. —L.J.