Sherne Byrd lost her job as a home health worker when her client died in March. For months, she found it difficult to find more work. “No one wants any caregiver coming into their home to take care of them during the pandemic, because they’re scared they’ll get COVID-19,” the 35-year-old single mom said.

Byrd, who lives in Pasadena, Texas, applied for unemployment benefits but had not yet received them when I spoke with her. Neither she nor her representatives at Lone Star Legal Aid knew the reason for the delay. Byrd used her federal stimulus check to pay rent in April and May but couldn’t make her payments in June or July. A judge on Wednesday ordered her and her children, ages 5 and 12, out of their home. She had hoped the court would empathize with her because the pandemic exacerbated her problems. She finally got another job that starts this week and said she would try to mitigate the landlord’s losses. “I’m doing the best I could,” she said. “I’ve been praying and praying.”

Over the past few years, the rising cost of renting has made many U.S. cities unaffordable for low- and middle-income families. But moving away from cities can mean leaving jobs, public transportation, and support from friends and family. As COVID-19 shutdowns left low-income workers jobless, economists began forecasting mass evictions later this year.

In March, Congress provided some relief with its coronavirus rescue package, including a moratorium on certain evictions that expired on Saturday. It prevented landlords of government-owned properties from evicting tenants who could not pay. It also applied to properties with mortgages backed by the federal government. Now that the moratorium has expired, those landlords must give 30 days’ notice to tenants they wish to evict. Many states passed their own moratoriums to cover all nonpayment evictions.

The moratoriums were multipurpose, allowing people to shelter in place while giving renters time to negotiate with landlords and secure employment. Nationwide, 24.7 million adults reported late or deferred housing payments in May, a Census Bureau survey showed. An analysis by the consulting firm Stout estimated landlords will file nearly 11.9 million eviction notices over the next four months. A filing doesn’t mean automatic eviction, but it does go on the tenant’s credit report regardless of its outcome.

Shamus Roller, executive director of the National Housing Law Project, said evicted renters usually end up in worse housing that is often overcrowded or unsafe. A small percentage of evictees become homeless with limited housing options. Roller said the evictions will hit some harder than others: “Nationally, blacks are about twice as likely to face eviction, even when you control for their education levels. Forty-five percent of Latinos don’t know how they’re going to pay the rent next month, nationally.”

Congress will begin debating a new stimulus bill that should extend the eviction moratorium. Some states plan to use funds from the federal relief package to assist renters. But in Tallahassee, Fla., “that system will probably not be up and running until the middle of August,” said Stephanie Johnson, an attorney with Legal Services of North Florida, a nonprofit organization that provides legal help to the poor. “There’s money out there,” she said. “It just hasn’t been accessible to tenants yet.” In the meantime, she recommends renters negotiate with their landlords.

The eviction moratoriums would not have helped Sherne Byrd because she did not live in government housing. She said she could ask her family in Louisiana for a place to stay, though her mother has cancer and might be unable to help. Byrd hopes to stay in Houston and keep her kids in their school. “I’ve been calling shelters,” she said. “I’m scared to take my babies in a shelter, and I’m scared to go in one. But I’ve got to do something because … I don’t know how it’s going to go.” 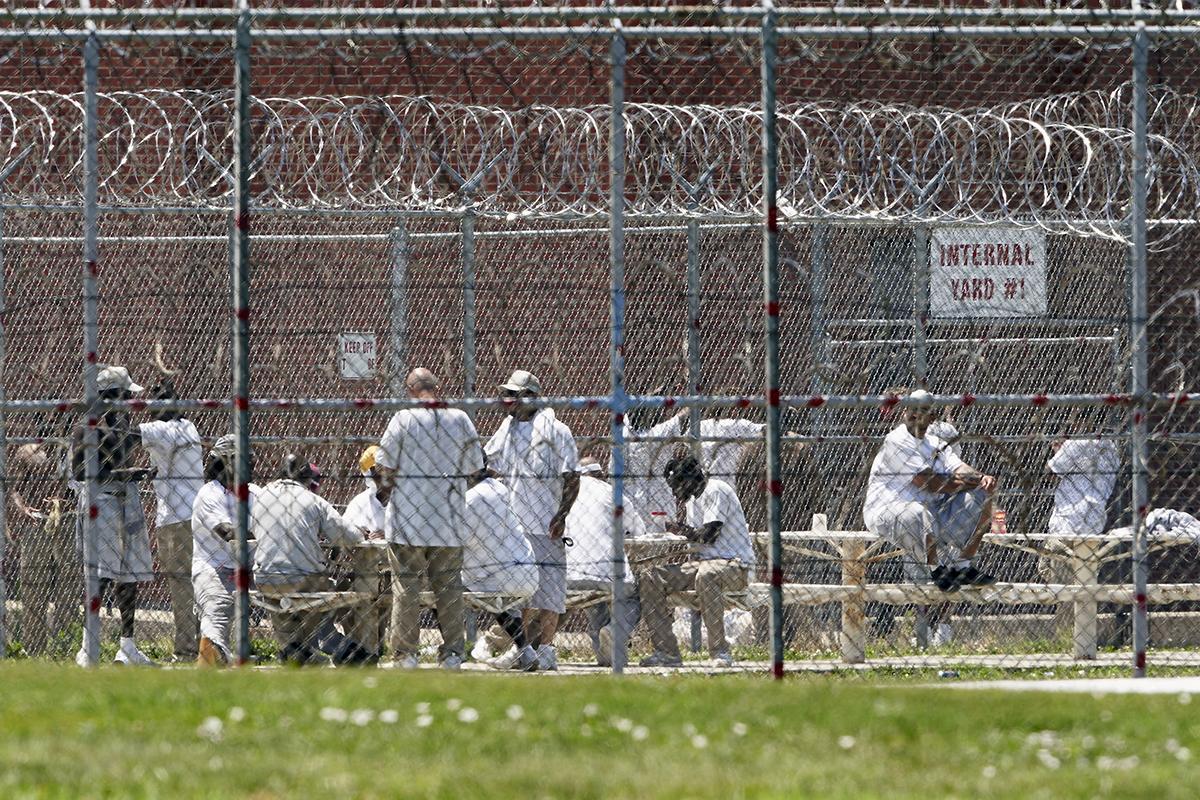 Prisoners gather in the yard at the Nebraska State Penitentiary in Lincoln, Neb., on Thursday. Associated Press/Photo by Nati Harnik

More than 57,000 prisoners in the United States have tested positive for the coronavirus since the pandemic began in March. At the urging of activists, many jails and prisons began releasing some at-risk inmates or moving them to safer, more isolated quarters. A report released on Friday showed the federal and state prison population dropped by 100,000 inmates, or 8 percent, between March and June.

But the Marshall Project and the Associated Press found coronavirus-related releases alone did not cause the decrease. Instead, data indicated prisons took fewer transfers from county jails, courts heard fewer cases, and parole officers sent fewer inmates back for minor offenses. For example, courts in North Carolina paused the admission of convicted criminals to state prisons for two months beginning in March, creating a backlog of 1,800 more inmates in county jails. —Kyle Ziemnick 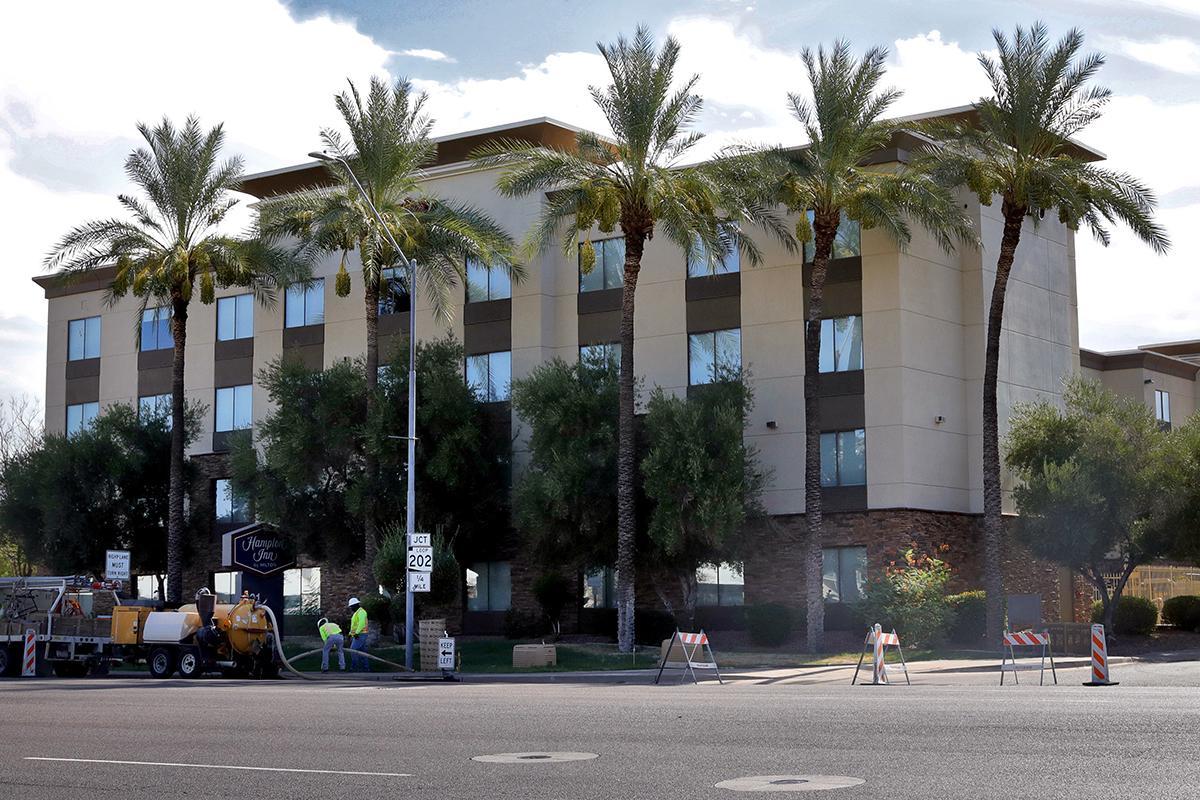 Prisoners gather in the yard at the Nebraska State Penitentiary in Lincoln, Neb., on Thursday. Associated Press/Photo by Nati Harnik

Hotels near the U.S. southern border in Texas and Arizona are receiving unexpected visitors: migrant children from Central America. MVM Inc., a private contractor serving U.S. Immigration and Customs Enforcement, housed more than 150 children in three Hampton Inns while preparing to send them back to their home countries.

The U.S. government has instituted policies that temporarily block most asylum-seekers during the coronavirus pandemic. This has led to the expulsion of 2,000 unaccompanied children since March.

MVM kept children at three hotels—one in Phoenix and one each in McAllen and El Paso, Texas—sometimes for several days at a time. Members of the Texas Civil Rights Project, an advocacy group, said they found people in scrubs taking care of kids on the fourth and fifth floors of the McAllen hotel. They also found unmarked white vans outside the hotel, but no official government vehicles. ICE referred to the contractors as “non–law enforcement staff members trained to work with minors.”

Lawyers plan to launch a lawsuit on behalf of the children based on a 1993 court settlement that requires the government to place migrant kids in shelters. —K.Z.

The economic blows of the coronavirus pandemic could lead to the closure of thousands of additional nonprofit organizations in the United States. Recent projections estimate 22,000 beyond the yearly average eventually will shut their doors.

Candid, a data analysis and resource center for philanthropic work, ran a model in mid-July based on factors such as how long the disruption lasts, different categories of revenue decline, and organizations’ expense reduction. The most optimistic outcome, referred to as a “miracle scenario,” saw only 3 percent of U.S. nonprofits closing. The median of 11 percent would produce 22,000 additional closings over the next one to three years. In the worst-case scenario, almost 40 percent of all U.S. nonprofits could call it quits.

Candid Executive Vice President Jacob Harold offered several scenarios that could boost the organizations’ chances, MinistryWatch reported. More generous donors, greater government stimulus money, and taking on debt could reduce immediate effects, he said, adding, “There is reason to think we could be looking at years of financial impact, even after a vaccine has been created, manufactured, and released.” —K.Z.