WASHINGTON—While the Democratic-majority House of Representatives has focused on investigating President Donald Trump, and the Republican-controlled Senate has worked on confirming the president’s picks for the judiciary and executive branch, major bipartisan legislation has fallen by the wayside. One item lingering on the congressional to-do list is relief for states recovering from natural disasters, some of which happened more than a year ago.

Lawmakers have sparred for months over how much aid should be provided to stricken communities, which disasters should be included in the relief effort, and what additional priorities to tack onto the bill.

Last month, Senate Democrats prevented the bill from passing due to a dispute over additional aid to Puerto Rico for recovery from Hurricane Maria in 2017. President Donald Trump had vowed not to give the Puerto Rican government any more money and accused the U.S. territory of mismanaging the funds it had already received. Lawmakers previously authorized $41 billion for the island’s recovery, though not all of that has been released.

Senate Republican leadership agreed to a compromise that would have provided $900 million in aid to Puerto Rico. The deal also rejected the White House request for $4.5 billion in emergency funding to beef up security at the U.S. southern border, which was initially favored by Republicans. Despite that, Trump said at a White House event on May 23, “I totally support” the disaster relief bill.

That same day, the Senate passed a $19 billion aid package by a 85-8 vote. That bill would help Midwestern states hit by flooding, California communities devastated by last summer’s wildfires, and hurricane-ravaged states like Florida, Georgia, and North Carolina. But once it reached the House, several Republicans prevented the bill from reaching the president’s desk.

By end of last week, many House lawmakers had already left Washington for the weeklong Memorial Day recess. Instead of calling members back, Democratic House leadership attempted to pass the bill in pro forma sessions via unanimous consent. If all members present agreed to the measure, it would have been approved, but on Friday, Rep. Chip Roy, R-Texas, one of three members in the chamber, objected. He argued the bill should include funding for the immigration and humanitarian crisis at the U.S. southern border and that members should be in town to vote. Roy also said cuts to the budget elsewhere should have offset the bill’s increase in spending.

Then on Tuesday, Rep. Thomas Massie, R-Ky., blocked another attempt to pass the bill via unanimous consent. He voiced objections not about the bill itself, but about the manner in which Democratic leadership tried to pass it. He said House Speaker Nancy Pelosi, D-Calif., should have “called a vote on this bill before sending every member of Congress on recess.”

Some conservative groups praised Roy and Massie. The Conservative Partnership Institute’s Rachel Bovard wrote in an op-ed for the Washington Examiner that members of Congress should be able to debate and add amendments to items of the bill that did not directly relate to disaster funding. She noted that the bill contains “$55 million for the Head Start program, $1 million for worker training programs, extends the insolvent National Flood Insurance Program without making any reforms for the 11th time, and modifies the federally subsidized crop insurance program to cover the production of industrial hemp.”

The bill could face a third vote this week. If it is blocked again, the House will have to wait till it reconvenes on Monday to consider it.

Some Republicans, notably those representing disaster-stricken areas, are joining Democrats in decrying their colleagues for the blockade. Rep. Martha Roby, R-Ala., said lawmakers have already waited far too long to act, noting that aid might come too late for agricultural communities, WTVY-TV reported. “We are far past the window for our farmers to get a crop in the ground,” she said. 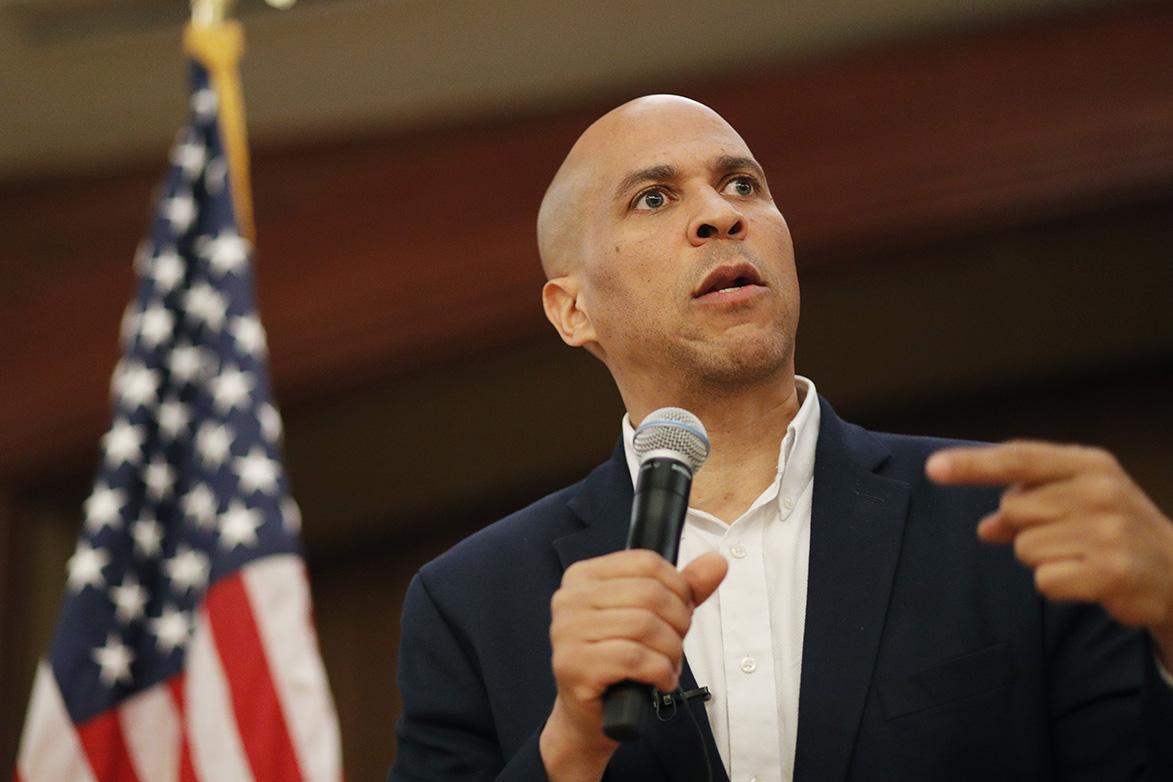 Democrats seize on Mueller’s remarks to call for impeachment

The candidates quickly parsed Mueller’s remarks for clues that could bolster an impeachment case. When describing the inquiry into whether Trump obstructed justice by attempting to interfere with the Russia investigation, Mueller reiterated that his office followed Justice Department policy forbidding charging a sitting president with a crime. The Constitution provides a “process other than the criminal justice system to formally accuse the president of wrongdoing,” he said, referencing the role of Congress in conducting impeachment proceedings.

Following the statement, Sens. Cory Booker of New Jersey and Kirsten Gillibrand of New York, along with Mayor Pete Buttigieg of South Bend, Ind., voiced support for impeachment for the first time.

Sen. Kamala Harris of California tweeted that “what Mueller basically did was return an impeachment referral. Now it is up to Congress to hold this president accountable.” Sen. Elizabeth Warren of Massachusetts said Mueller’s remarks “made clear what those who have read his report know: It is an impeachment referral, and it’s up to Congress to act.”

House Speaker Nancy Pelosi, D-Calif., continued to throw water on talk of impeachment. She said that though moving forward with impeachment is not “off the table,” it is not in the immediate future. “We do want to make such a compelling case, such an ironclad case that even the Republican Senate, which at the time seems to be not as objective … will be convinced,” she said Wednesday at an event at the Commonwealth Club of California.

Pelosi also downplayed how many lawmakers are calling for impeachment, saying, “Yes, there are some, and the press makes more of a fuss about the 38 than the 200, who are over half of the Congress.”

Former Vice President Joe Biden, who is also running for the Democratic nomination, told The New York Times that he “agrees with Speaker Pelosi that no one would relish what would certainly be a divisive impeachment process.” —H.P. 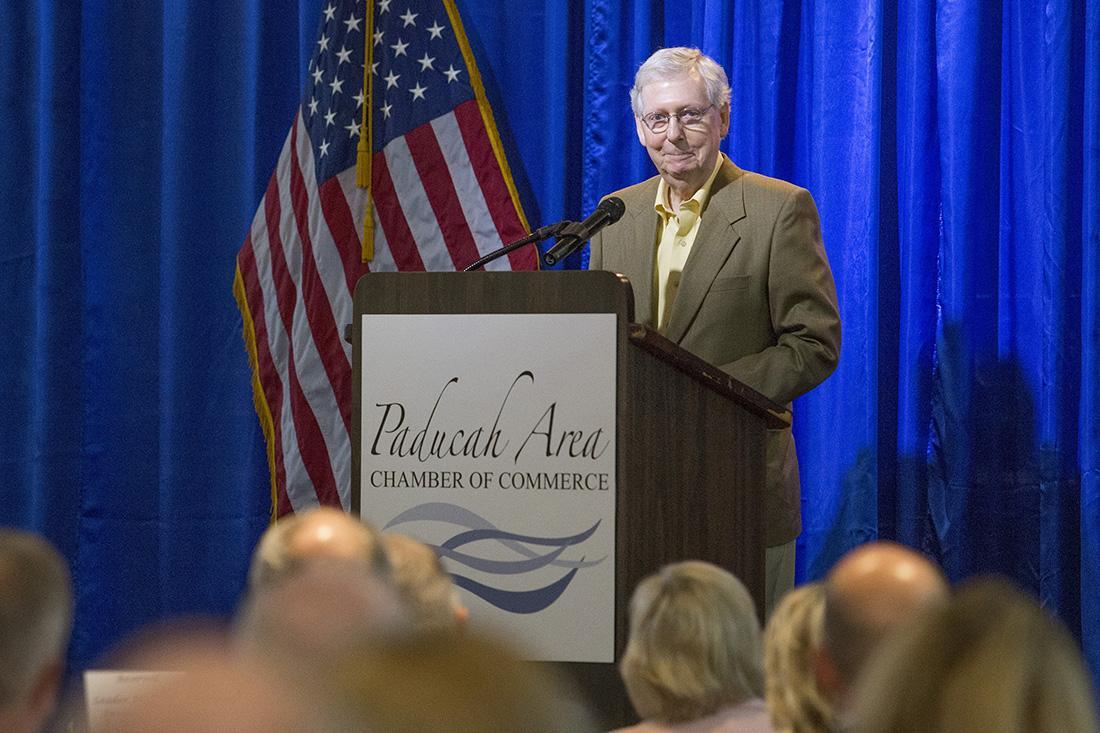 Senate Majority Leader Mitch McConnell, R-Ky., said the Senate would move to confirm a potential Supreme Court nominee if there were a vacancy next year, despite his efforts to prevent a confirmation during the 2016 presidential elections.

At a luncheon for the Paducah Area (Ky.) Chamber of Commerce on Tuesday, McConnell was asked how he would respond if a U.S. Supreme Court justice were to die or retire during next year’s presidential campaign. He told the audience, “Oh, we’d fill it.”

McConnell underscored the importance of filling courts with conservative jurists, noting that unlike legislation, which can be easily changed, judicial appointments have a more lasting effect. “What can’t be undone is a lifetime appointment to a young man or woman who believes in the quaint notion that the job of a judge is to follow the law,” he said. “So that’s the most important thing we’ve done for the country.”

Senate Minority Leader Chuck Schumer, D-N.Y., called McConnell a hypocrite because he refused to take action in 2016 when President Barack Obama nominated Merrick Garland to the high court after Justice Antonin Scalia died in February of that year. At the time, McConnell said he thought voters should weigh in on who would appoint the next Supreme Court justice.

A spokesman for the GOP leader claimed he had been consistent in his views. “McConnell has conveyed this reasoning several times—the decision not to consider Garland’s nomination was because the Senate was held by a different party than the president leading into an election. His answer Tuesday is consistent with that claim,” spokesman David Popp said. —Anne K. Walters 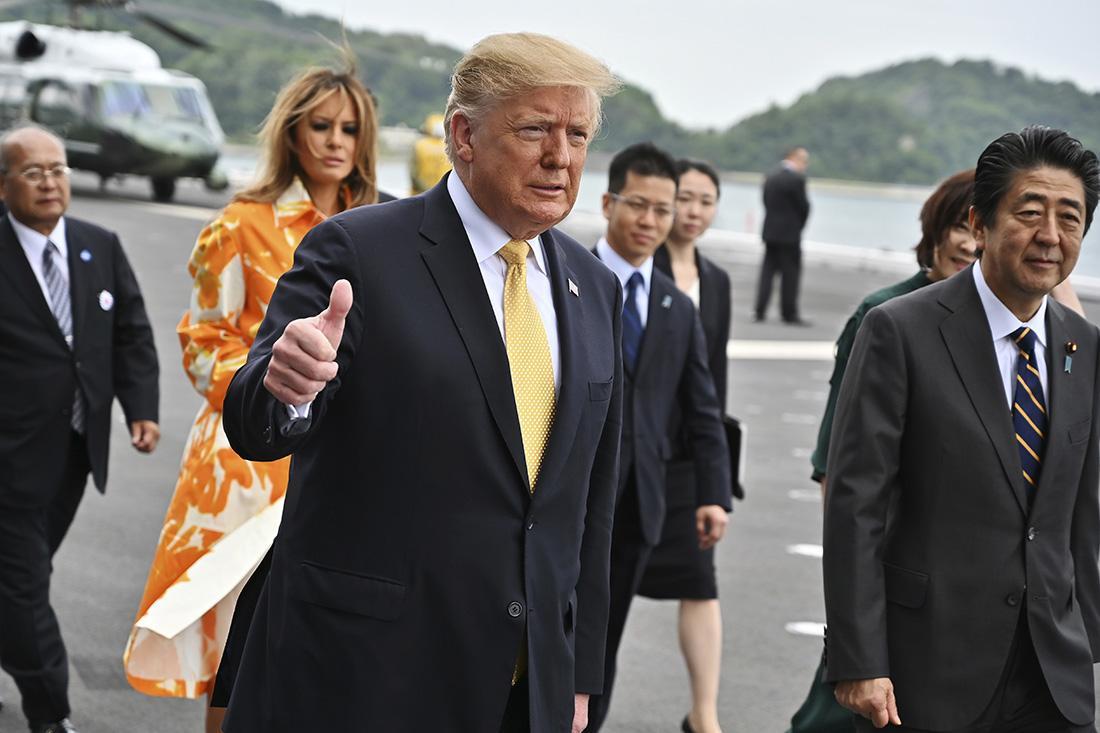 President Donald Trump’s tweets are having less effect than earlier in his presidency, according to statistics compiled by Axios. His Twitter interaction rate fell from 0.55 percent in November 2016, the month he was elected, to only 0.16 percent this month. Twitter interaction rates measure how active an account’s followers are by adding retweets and likes per tweet and dividing that number by total followers.

One reason for the decline may be that the president often repeats himself in his tweets. Trump tweeted “No Collusion” 54 times, “No Obstruction” 30 times, and “Witch Hunt” 20 times between April 1 and May 26.