The leaders of the U.S. Catholic Church grasped for credibility this week, approving a handful of measures intended to set a new course toward accountability amid a crisis of sexual abuse in the church.

The United States Conference of Catholic Bishops (USCCB) gathered in Baltimore this week for its three-day Spring General Assembly under intense public pressure after taking no action on sexual abuse prevention at its meeting in November. The Vatican, at the time, suspended a planned vote on two measures that would have bolstered bishop accountability, citing canonical concerns and not enough time to review the proposals.

The impression since then is that “American bishops have offered the faithful new scandals rather than answers to old ones,” wrote canon lawyer Ed Condon for First Things on Monday, referencing an investigation into former Bishop Michael Bransfield, ongoing questions over the disgrace of former Cardinal Theodore McCarrick, and questions that surfaced last week about Cardinal Daniel DiNardo, president of the USCCB and archbishop of the Galveston-Houston Archdiocese in Texas. An Associated Press investigation alleged DiNardo mishandled an abuse investigation, reassigning a priest who had reportedly lured an adult female parishioner into a sexual relationship. DiNardo has denied any wrongdoing.

Last month, Pope Francis issued a new universal law for the Roman Catholic Church requiring all priests and nuns to report clergy sex abuse and cover-ups by their superiors to church authorities. The pope called on the conferences of bishops around the world to implement the law within a year, a call that guided this week’s meetings in Baltimore.

After heated debates on Tuesday, mostly centered on the role of lay experts like lawyers or criminal justice professionals in abuse allegation investigations, the U.S. bishops approved four measures Wednesday and Thursday. The first will create a national sex-abuse hotline, where people can file complaints by telephone or through an online form against bishops who commit abuse or cover it up. The other three include a measure implementing Francis’ universal reporting law in the United States, another specifying that bishops will now be governed by the same code of conduct that has applied to priests since 2002, and one that establishes new standards for bishops emeriti who have resigned or were removed from office.

The measures encourage, but stop short of mandating, that lay experts take part in investigating clergy. They also do not specify a procedure for informing police of abuse allegations. (For example, the hotline will route complaints against bishops to one of 32 regional supervisory bishops in the United States.) Critics argue that leaves the bishops policing themselves and keeps reports of abuse insulated within the church.

“In the United States, there is only one appropriate ‘third-party reporting system’—the legal authorities,” said Marci Hamilton, a University of Pennsylvania professor and an expert on child-abuse prevention. She added that the bishops’ “incapacity” to give up control of child sex abuse cases “will be their downfall.”

“We find ourselves at a turning point, a critical moment in our history, which will determine in many ways the future vibrancy of the church, and whether or not trust in your leadership can be restored,” said Francesco Cesareo, the lay chairman of the USCCB’s National Review Board during a presentation to the bishops earlier this week. He said lay involvement in the review of abuse allegations against bishops was key to restoring the credibility of the church: “Not involving laity with competence and expertise in leading the review process would signal a continuation of a culture of self-preservation that would suggest complicity.”

A study released this week found the abuse crisis has left a mark on the 76 million members of the U.S. Catholic Church. The Pew Research report found more than one-quarter of U.S. Catholics say they have scaled back Mass attendance or financial contributions to their parish in response to the recent reports of sexual abuse and misconduct. Just 36 percent said they believed U.S. bishops did a good job of responding to the reports.

Time will tell if this week’s initiatives, and the bishops’ soft commitments to use laity to fight sexual abuse, can restore that lost faith. 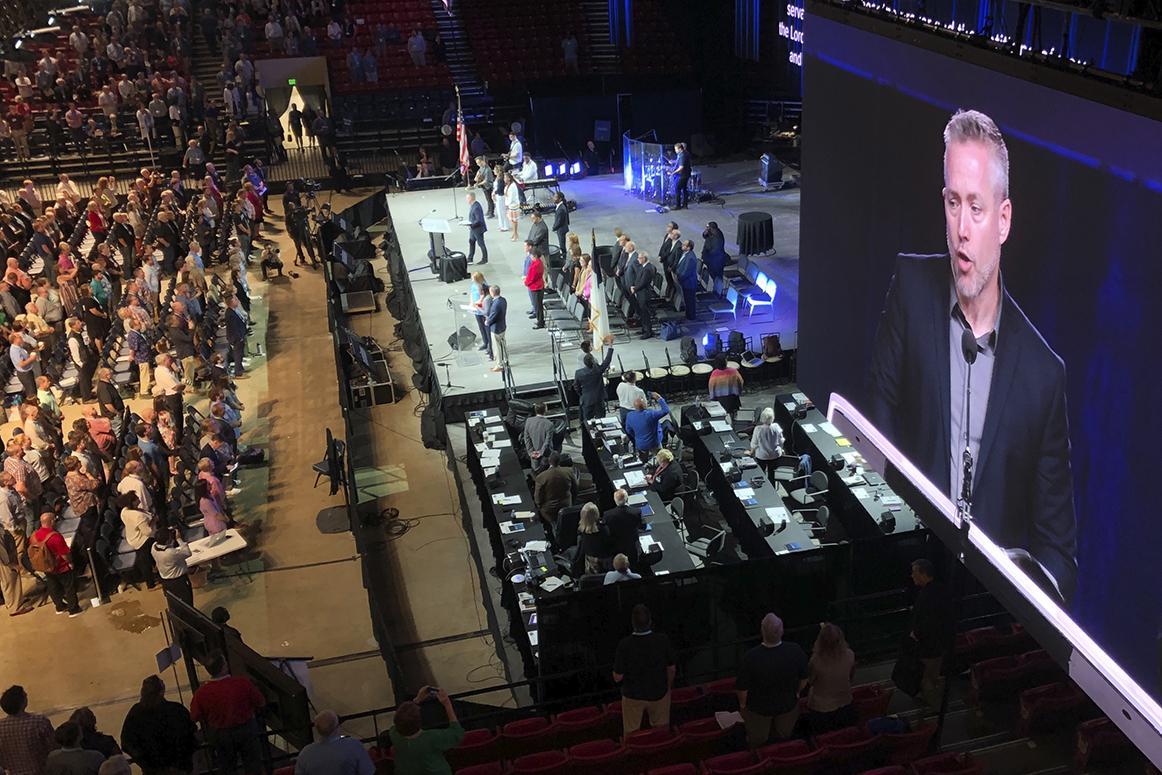 SBC President J.D. Greear speaks at the denomination’s annual meeting in Birmingham, Ala., on Wednesday. Associated Press/Photo by Jay Reeves

Facing its own reckoning over sexual abuse and cover-ups, the Southern Baptist Convention voted this week to make it easier to expel churches that mishandle abuse cases. The vote came on Tuesday at the annual meeting of the largest Protestant denomination in the United States.

“This is not a distraction from the mission,” SBC President J.D. Greear, who was unanimously reelected to a second term on Tuesday, said of the fight against sexual abuse. “Protecting God’s children is the mission of the church.”

Delegates, known as “messengers,” on Tuesday voted to amend the SBC’s constitution to make it clear that individual churches could be expelled for mishandling or covering up sexual abuse. SBC leaders proposed the amendment earlier this year in response to a series of articles published in February by the Houston Chronicle and the San-Antonio Express-News detailing accusations against 380 Southern Baptist leaders that involved more than 700 victims over the past 20 years. A sexual abuse study group appointed last year by Greear released a report this week sharing the stories of abuse survivors and making recommendations regarding training and protocol, including background checks for churches and seminaries. The report said work is ongoing regarding a possible database of credibly accused abusers, a process leaders said has been difficult due to legal issues.

Matt Chandler, pastor of the Village Church, an SBC congregation with 10,000 members based in Flower Mound, Texas, made an unplanned appearance on a panel Tuesday and addressed a New York Times report published on Monday. The Times interviewed Christi Bragg, a former Village Church member whose teenage daughter said last year that a youth pastor at the church molested her in 2012 at a childrens camp. Bragg filed a police report and contacted the church, which also filed a police report. The staff member, Matthew Tonne, was removed from the Village Church staff in June 2018 and was indicted and arrested on charges of sexually molesting Bragg’s daughter late last year. But Bragg told the Times she felt the church did more to protect itself than her daughter.

Chandler on Tuesday said he thought the church did the best it could to care for the family and defend the victim. “We are an imperfect church with imperfect people,” he said. “I am painfully aware of my limitations, of the weaknesses of the Village Church, of our failures … but when it comes to reporting as soon as we heard, taking our cues from the [police] detective and the family, I’m not sure what we could have done different.” —K.C. 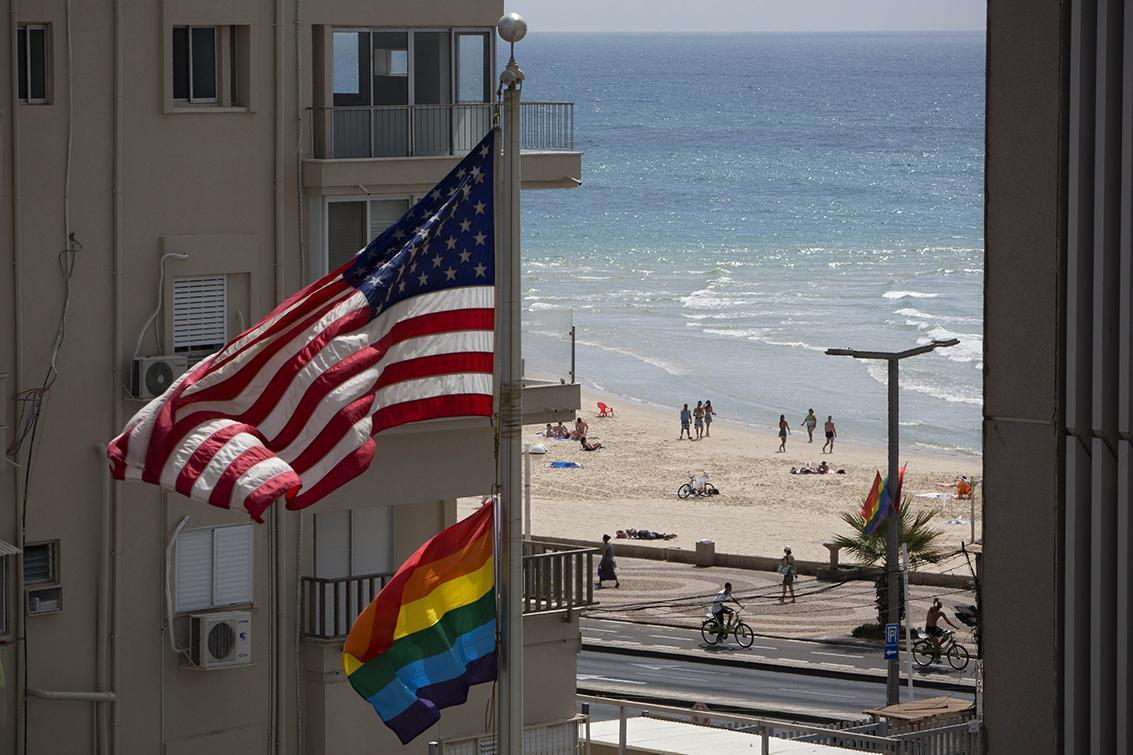 SBC President J.D. Greear speaks at the denomination’s annual meeting in Birmingham, Ala., on Wednesday. Associated Press/Photo by Jay Reeves

The Trump administration has denied requests by several U.S. embassies to fly rainbow flags to celebrate LGBT Pride Month in June, according to a report by NBC News. Diplomats at embassies in Brazil, Germany, Israel, and Latvia, among others, requested permission to fly the flag below the U.S. flag, something the Obama administration had allowed.

Vice President Mike Pence confirmed the U.S. State Department directive in an interview on Monday: “As the president said on the night we were elected, we’re proud to be able to serve every American … but when it comes to the American flagpole at American embassies in capitals around the world, one American flag flies.”

LGBT activists blasted the move, saying it runs counter to Trump’s tweet on May 31 celebrating LGBT Pride Month and the “outstanding contributions of LGBT people have made to our great Nation.”

Some embassies are reportedly ignoring the instructions or finding ways around them: U.S. missions in Seoul, South Korea, and Chennai, India, are displaying rainbow flags on their façade, while the embassy in New Delhi installed a rainbow light display. Embassies in Santiago, Chile, and Vienna, Austria, flew rainbow flags below the American flag last month for International Day Against Homophobia, Transphobia, and Biphobia.

Stateside, Wisconsin Gov. Tony Evers, a Democrat, ordered the raising of the rainbow flag below the U.S. and Wisconsin flags atop the state Capitol last week, a move that some said “signified a new direction for Wisconsin,” but others condemned as an abuse of gubernatorial power. “Singling out one group that has inordinate political power is wrong and is disrespectful to, at a minimum, those who take exception to the LGBT agenda,” said Julaine Appling, president of Wisconsin Family Action. —K.C.