Jilted students wrestle with the Education Department over loans

A federal judge held U.S. Secretary of Education Betsy DeVos in contempt of court last week for billing thousands of students who were victims of education fraud. U.S. Magistrate Judge Sallie Kim on Thursday said the Department of Education continued to collect money from former students of the for-profit Corinthian Colleges despite a May 2018 court order to stop. The San Francisco judge fined the department $100,000 and required detailed monthly reporting to verify future compliance.

“The judge is sending a loud and clear message,” said Toby Merrill, director of Harvard Law School’s Project on Predatory Student Lending, which helped file the suit. “Students have rights under the law, and DeVos’ illegal and reckless violation of their rights will not be tolerated.”

Many students were left stranded with student loan debt and no diploma after Corinthian Colleges abruptly shuttered entire campuses in 2015 due to a rising tide of lawsuits and investigations, some of them criminal. In 2017, several thousand of the former students sued the Education Department, arguing its “borrower defense” rule should fully discharge their student loans. Under the Obama-era policy, borrowers could claim their university defrauded them and receive debt relief. The lawsuit also challenged a 2017 Education Department policy that provided only partial debt relief based on the borrower’s employment status and income.

Judge Kim in May 2018 ruled against the partial loan forgiveness and ordered the department to stop using it. Several months later, another federal judge demanded the Education Department reinstate loan forgiveness via the “borrower defense” rule even though DeVos requested more time to revise the rules and improve the program’s accountability.

According to court documents filed during the October 2018 trial, the Education Department erroneously billed more than 16,000 students for months following the May ruling. More than 3,000 students paid the bills, and the department withheld the wages or tax refunds of another 1,300 students.

The judge wrote in her ruling that there was “no question” the Education Department violated the May 2018 injunction.

DeVos said that while some loan servicers made errors, the department was working to correct the process. She also contended that the burden of proof standard in the “borrower defense” rule is too low to effectively measure whether a school defrauded a student. She claimed the rule unfairly opens the floodgates for billions of dollars of payouts without proper checks and balances.

“Indeed, the cost concerns are serious, as is the potential for such efforts generally to become a slippery slope toward more and more taxpayer-financed student loan forgiveness,” wrote The Heritage Foundation’s Mary Clare Amselem early on in the dispute.

Democratic presidential candidates have proposed a host of billion- and even trillion-dollar education policies that include not only widespread student debt forgiveness but also expansive free tuition plans.

“Who do they think is actually going to pay for these?” DeVos said in a recent Fox News interview. “It’s going to be two-out-of-three Americans that aren’t going to college paying for the one-out-of-three that do.”

Meanwhile, House Democrats requested that DeVos testify in the upcoming weeks about the months of erroneous billing between May and October of last year. 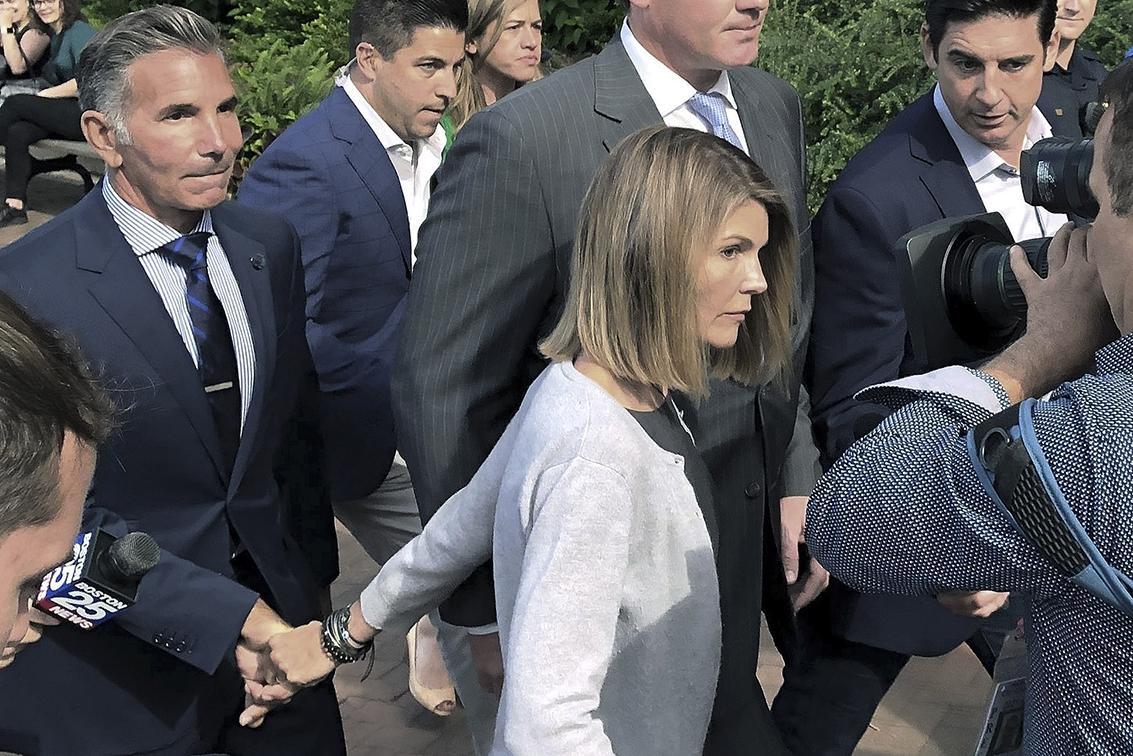 Sentences continue to roll in for individuals convicted in this year’s massive college admissions scandal. The same week Desperate Housewives star Felicity Huffman reported to a California federal prison to serve her two-week sentence earlier this month, real estate developer Robert Flaxman of Los Angeles was sentenced to one month in prison for paying an ACT test proctor $75,000 to feed his daughter answers while she took the college entrance exam in 2016.

Last week, California marketing executive and author Jane Buckingham was sentenced to three weeks in prison for paying $50,000 to a fake charity operated by the scam’s mastermind, William “Rick” Singer. Like Huffman and many of the other parents embroiled in the scandal, Flaxman and Buckingham pleaded guilty in May to one count each of fraud and conspiracy, bringing the number of parents sentenced in the sweeping case to 11.

Parents Douglas Hodge, Michelle Janavs, Manuel Henriquez, and Elizabeth Henriquez all initially pleaded not guilty in May but changed their tunes last Monday, submitting guilty pleas in federal court in Boston. All four face charges of money laundering and conspiracy to commit wire and mail fraud.

And while the spotlight primarily shined on the parents, Houston private tennis club owner Martin Fox agreed last week to a plea deal that requires him to return $245,000 in bribe money he received to allow cheating at a local college entrance exam testing site. Authorities also accuse him of arranging fake athletic profiles for two students to gain admission to the University of San Diego and one to the University of Texas at Austin.

Also last week, 10 parents who originally pleaded not guilty found themselves on the receiving end of new charges in the unfolding case, including Full House actress Lori Loughlin and her fashion designer husband, Mossimo Giannulli. This is the second time prosecutors have added charges for this particular group of parents, leaving court watchers speculating that the legal team is pressuring the holdouts to change their pleas.

On Friday morning Huffman walked out of a San Francisco Bay Area federal prison two days early. Prison guidelines allow for an early release when a sentence concludes on a weekend.

The U.S. Department of Justice has charged more than 50 people in the ongoing investigation, the largest-ever of its kind. —L.E. 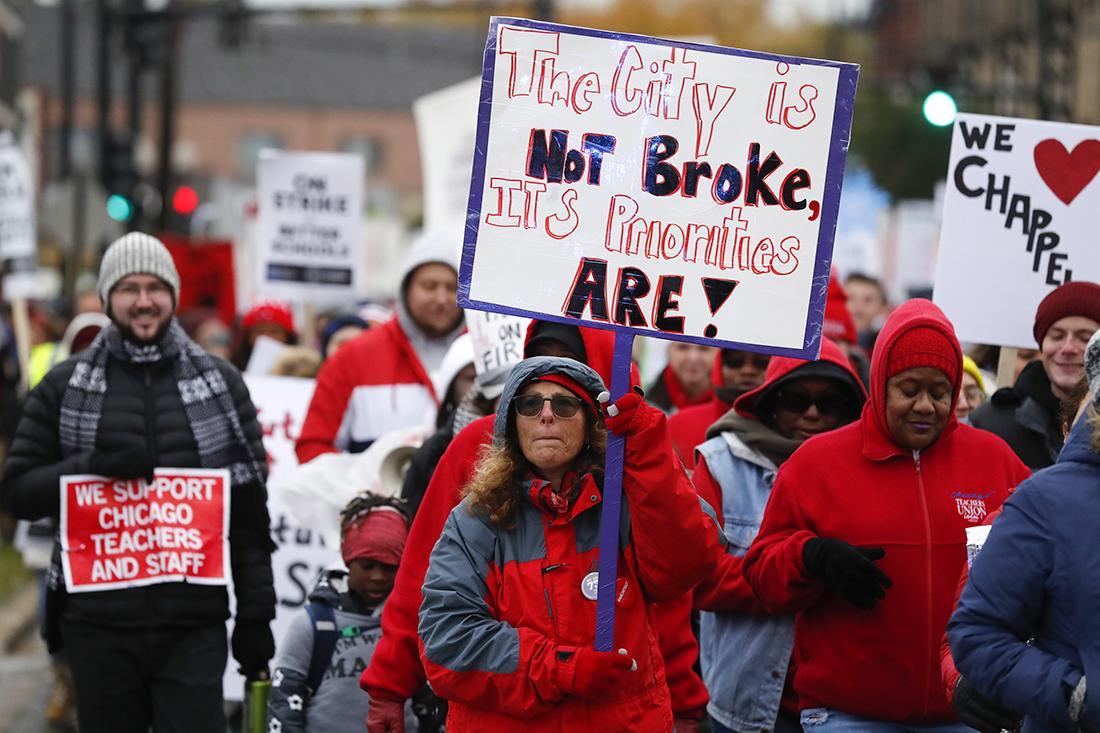 The city of Chicago still has not agreed on a contract with its striking teachers union. Negotiations over the weekend produced a tentative deal on Sunday, but talks stalled on Monday, then resumed and stalled again on Tuesday when the Chicago Teachers Union (CTU) leadership refused to bring the city’s latest offer to a vote.

“Are we really keeping our kids out of class unless I agree to support the CTU’s full political agenda wholesale?” Mayor Lori Lightfoot, a Democrat, said at a news conference on Tuesday. “If the CTU wants a deal, there’s a deal to be had right now on the table.”

Both sides said they have made progress on contentious items such as teacher pay, class sizes, and support staffing levels for positions like nurses and social workers. They cannot agree on a union demand for teachers to have 45 minutes of daily prep time to plan their lessons.