Avengers: Endgame didn’t just shatter box office records during its U.S. debut in April—it also made history in China, grossing more than $330 million on opening weekend and becoming the biggest foreign film to premiere there.

In Marvel Studios’ 2016 superhero film Doctor Strange, Tilda Swinton, a white British actress, was cast to play the Ancient One, a character the original 1960s comic portrayed as an elderly Tibetan monk. The region of Tibet in western China has rejected Chinese authority throughout history. In an interview with Double Toasted, screenwriter C. Robert Cargil said, “If you acknowledge that Tibet is a place and that he’s Tibetan, you risk alienating 1 billion people.” He noted the added risk of “the Chinese government going, ‘Hey, you know one of the biggest film-watching countries in the world? We’re not going to show your movie because you decided to get political.’” The movie instead portrayed the Ancient One as a Celtic sorcerer.

The Chinese government is simultaneously tightening its grip on the media its people are allowed to consume. It recently eliminated its State Administration of Press, Publication, Radio, Film, and Television, placing media and entertainment censorship directly in the hands of the propaganda department. “There is a notion that its propaganda has not worked well enough,” Orville Schell, director of the Center on U.S.-China Relations at the Asia Society, told the New York Times. “There’s a real sensitivity to the blockbuster power of Hollywood.”

China is bankrolling more top-tier Hollywood films than ever, and its strategy of portraying its government and history in a positive light is seeping into American films, television, and music. In effect, China is gaining control over what American audiences see and hear, and some are noting that criticism of its authoritarian regime is becoming harder to find.

The CBS All Access streaming platform recently blacked out from an episode of The Good Fight an eight-second animated clip that poked at Chinese censorship and the difficulty American companies face doing business there. The show’s cartoon snippets regularly feature controversial political topics, but Jonathan Coulton, a songwriter who makes the clips, told The New York Times that CBS removed the section out of concern for its Chinese employees and audiences.

Other examples of the entertainment industry bowing to Chinese censorship include the 2012 Red Dawn remake—the Chinese army was changed to a North Korean army—and the 2015 film Pixels, in which Sony executives reportedly altered a scene originally intended to show aliens blasting a hole in the Great Wall of China so the country would release the movie. The aliens blew up the Taj Mahal instead.

Two decades ago, Hollywood was producing films like Seven Years in Tibet, a 1997 top-grossing film that showed Chinese soldiers brutally beating Tibetans, and Martin Scorsese’s Kundun, a movie about the Dalai Lama’s early life in the early communist China and his exile to India. Now, with Chinese revenue at stake, the American entertainment industry is poised to tell very different stories. 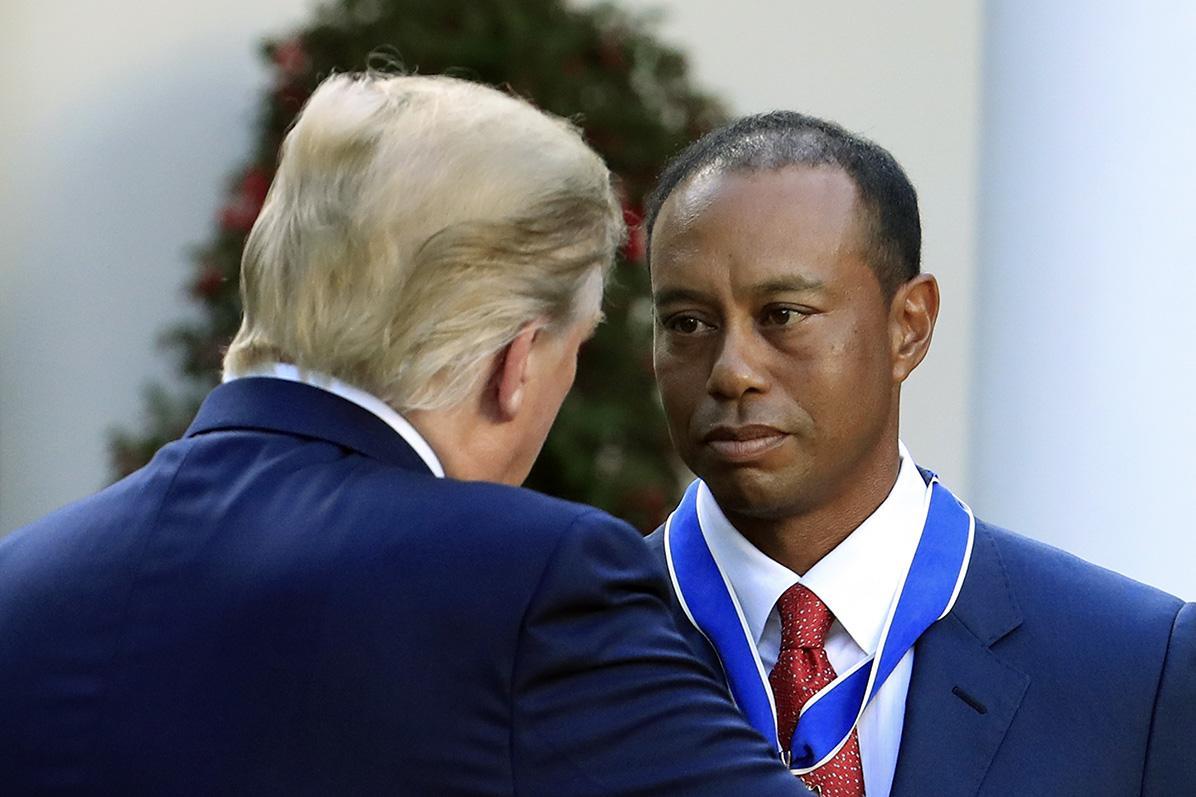 President Donald Trump awards the Presidential Medal of Freedom to Tiger Woods in the Rose Garden of the White House on Monday. Associated Press/Photo by Manuel Balce Ceneta

President Donald Trump awarded Tiger Woods the Presidential Medal of Freedom on Monday, describing the golfer as a “true legend” who transformed the sport and then fought through years of setbacks to return to the top of the game. Woods is the fourth golfer to be awarded the nation’s highest civilian honor, given to individuals who have made “especially meritorious contributions to the security or national interests of the United States, to world peace, or to cultural or other significant public or private endeavors,” according to the White House. He received the award just a few weeks after winning the Masters in a landmark comeback victory. It was the Woods’ first win since the 2013 Bridgestone Invitational and his 80th win on the PGA Tour, just two short of the career record set by Sam Snead.

“Tiger was back on top,” Trump declared during the Rose Garden award ceremony.

The 43-year-old dominated the sport for more than a decade at the turn of the 21st century, but injuries and personal crises—including accusations of marital infidelity and divorce from his wife, Elin Nordegren—kept him out of play for much of the past 10 years.

Golfers Jack Nicklaus, Arnold Palmer, and Charlie Sifford, sometimes referred to as the “Jackie Robinson of golf,” won the Presidential Medal of Freedom before Woods, who noted that he named his son after Sifford. “He was like the grandpa I never had,” he said.

Woods’ mother Kultida; daughter, Sam Alexis, 11; son, Charlie Axel, 10; girlfriend Erica Herman; and longtime caddie, Joe LaCava, attended the ceremony. His father, Earl, died in 2006. Woods thanked his parents and supporters saying, “You’ve seen the good and bad, the highs and lows, and I would not be in this position without all of your help.”

Trump and Woods have a business relationship going back decades. Woods appeared at Trump’s Taj Majal casino in Atlantic City, N.J., a day after winning his first Masters victory in 1997. He also designed a golf course in Dubai to be managed by the Trump Organization that has not yet been completed. —Lynde Langdon 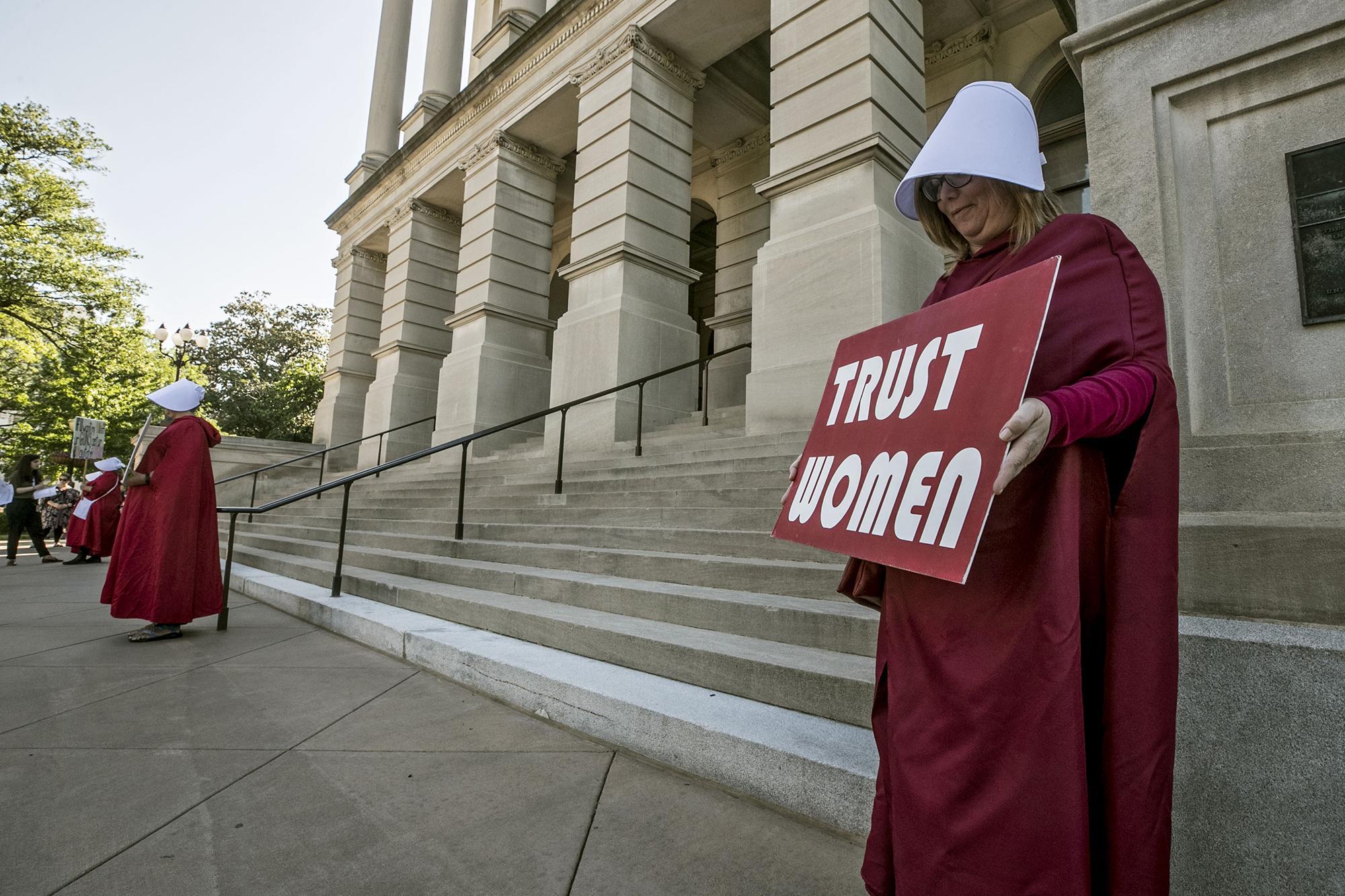 President Donald Trump awards the Presidential Medal of Freedom to Tiger Woods in the Rose Garden of the White House on Monday. Associated Press/Photo by Manuel Balce Ceneta

Three production companies say they won’t film in Georgia because of a state law signed by Gov. Brian Kemp this week that will protect unborn babies from abortion after they have a detectable heartbeat. The protests probably won’t affect the state economy because the companies, Blown Deadline, Killer Films, and Duplass Brothers Productions, don’t regularly work in Georgia. Blown Deadline has produced HBO series such as The Wire, while Killer Films and Duplass Brothers Productions specialize in independent films. Actress Alyssa Milano actively campaigned against the law and promised a film industry boycott of the state if it passed, but major studios have not signed on to the effort. Democrats in the state discouraged a boycott because of how it would affect Georgia workers. The heartbeat law is set to take effect Jan. 1, 2020. —L.L.

The National Comedy Center in Jamestown, N.Y., is working to digitize Lucille Ball’s archives, which include handwritten notes and family photographs of the late star of the popular 1950s sitcom I Love Lucy. Much of the material, which also includes behind-the-scenes production papers and telegrams, has never been exhibited. The interactive National Comedy Center opened last summer near the existing Lucille Ball Desi Arnaz Museum in the actress’s hometown. The center aims to build on Ball’s vision for a museum that celebrates all comedy as an art form. —L.L.