The decision disappointed many Dominicans who are suspicious of the Beijing-backed company. Many nations have banned or sanctioned Huawei, which they suspect uses its technology to spy on foreign customers. Sinovac now accounts for 7.9 million of the 9.2 million administered doses in the Dominican Republic, or 86 percent of the tiny island nation’s vaccines.

While developing the Sinovac and Sinopharm shots in 2020, Beijing offered a $1 billion loan to Latin American nations to buy its vaccines. For some countries such as Honduras, a billion dollars is larger than the entire government budget. Many nations found the offer irresistible even though Chinese vaccines were more expensive and less effective than American ones and came with diplomatic strings attached.

Early this spring, the Paraguayan government said Chinese institutions told them to cut ties with Taiwan as a condition for buying Beijing’s vaccines. Paraguay condemned the action and accused Chinese institutions of using the crisis to “satisfy petty, sectorial, interests” by manipulating smaller governments into doing what is economically and politically advantageous for China.

Honduras has a long history of diplomacy with Taiwan, but President Juan Hernandez in May acknowledged he was considering opening a foreign trade office in China for the first time. The move would strain his country’s relations with Taiwan, but it would open the door for Honduras to buy Chinese vaccines. He said his impoverished country was struggling to get vaccines and would do whatever was necessary for the sake of the people.

China’s peddling of influence along with COVID-19 vaccines means people in Latin American countries might have missed out on more effective prevention. The World Health Organization has published various studies revealing Sinovac’s comparative ineffectiveness at stopping symptomatic infections after two doses. Phase III trials in Indonesia found Sinovac was 84 percent effective against symptomatic infection. Similar studies registered an effectiveness of 67 percent in Chile and 50.4 percent in Brazil. In comparison, the U.S.-made Pfizer and Moderna vaccines were about 95 percent effective against symptomatic coronavirus infections before the appearance of the delta variant.

Since delta appeared, studies show varying effectiveness among the United States’ Pfizer and Moderna shots, which use mRNA technology, and vaccines made from inactive viruses such as Sinopharm, Sinovac, and Johnson & Johnson. A recent Mayo Clinic study, which is still awaiting review, suggested the effectiveness of vaccines by Moderna and Pfizer decreased to as low as 76 percent and 42 percent, respectively, among patients in Minnesota last month. Studies in Brazil and Bahrain found Sinopharm and Sinovac less protective against the delta variant than other vaccines. A study conducted in China by Chinese scientists during a delta outbreak found the two Chinese-made shots were 77 percent effective at preventing the coronavirus and 100 percent effective at preventing severe illness and death.

“The truth is that everybody here wanted to get either Pfizer or Moderna vaccines,” said Pastor Alex Figueroa of Gracia Soberana Baptist Church in Santiago, Chile. “People got vaccinated with what was available, which was Sinovac.”

Officials in Uruguay say Sinovac is helping stop COVID-19 there. While they concluded Sinovac was only 61 percent effective at preventing coronavirus cases, they found the Chinese vaccine helped reduce death and ICU admissions by 95 percent and 92 percent, respectively. Since early June, case and death rates in Uruguay have steadily declined.

Other governments are encouraging their citizens to get third doses, often of different types of vaccines. President Abinader of the Dominican Republic received a Pfizer shot after getting two Sinovac doses in hopes of motivating others to follow suit. Some studies indicate third doses might increase immunity and reduce transmission, but there is little research on the effects of mixing vaccines.

The Biden administration has also begun trying to meet recent Latin American vaccine demand. As of July, President Joe Biden has pledged to donate 580 million vaccines around the world in the next two years. His offer comes nearly a year after China offered loans for its vaccines. So far, the U.S. government has delivered 36 million vaccine doses from Pfizer, Moderna, Johnson & Johnson, and AstraZeneca to Latin American nations. 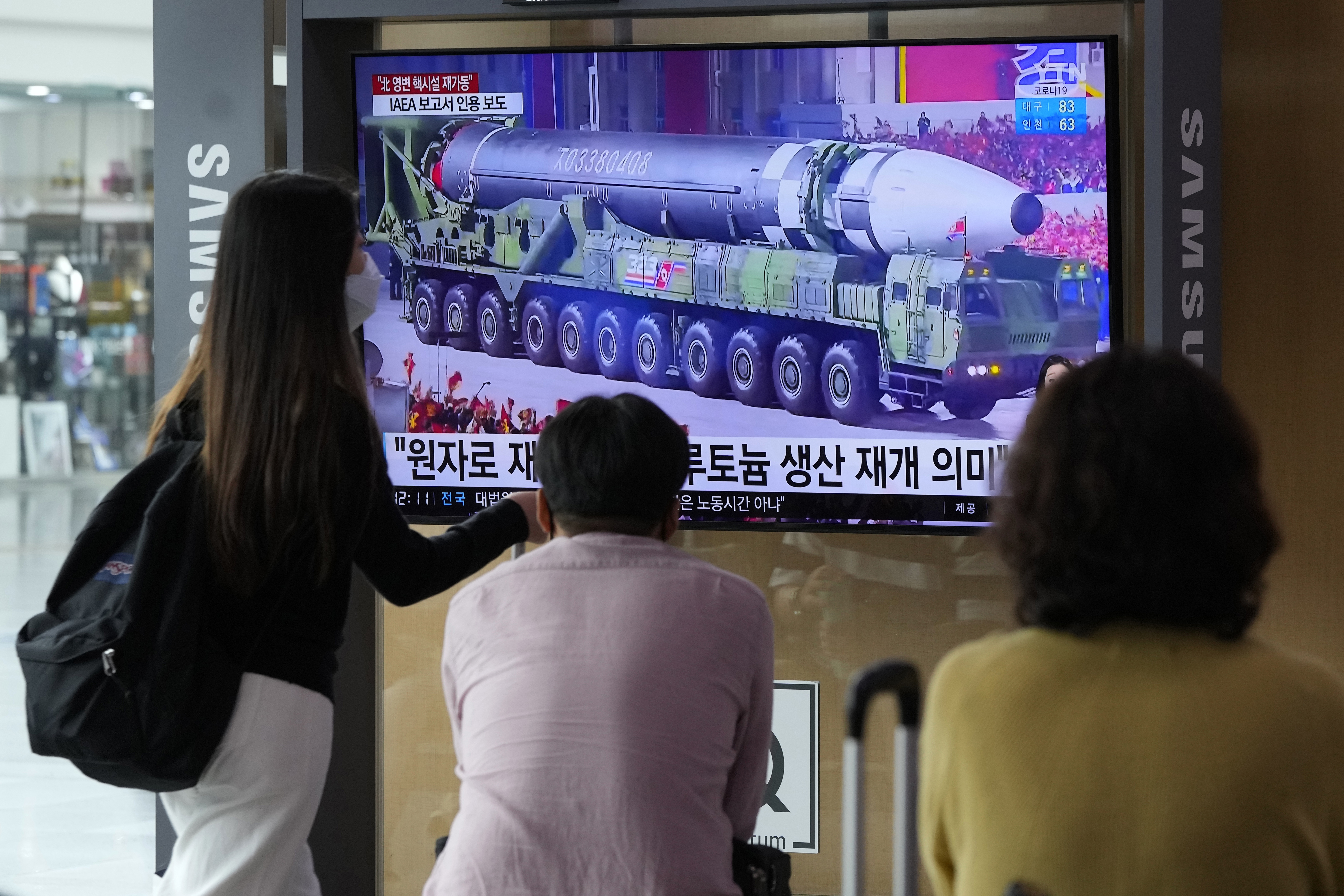 A TV screen in Seoul, South Korea, on Monday shows an image of a North Korean missile in a military parade. Associated Press/Photo by Ahn Young-joon

The International Atomic Energy Agency (IAEA) last week said it tracked signs of activity in early July at the 5-megawatt reactor at North Korea’s main nuclear complex in Yongbyon, north of the capital of Pyongyang. The reactor produces plutonium, a major ingredient in building nuclear weapons. The agency said it also observed indications of activity at Yongbyon’s radiochemical laboratory from mid-February to early July this year. The country extracts plutonium at the laboratory by reprocessing spent fuel rods from reactors.

Since North Korea kicked out IAEA inspectors in 2009, the agency has used satellite imagery and open-source information to monitor the country’s nuclear program.

North Korea threatened in recent months to expand its nuclear program if the United States fails to end its “hostile” policy. —Onize Ohikere 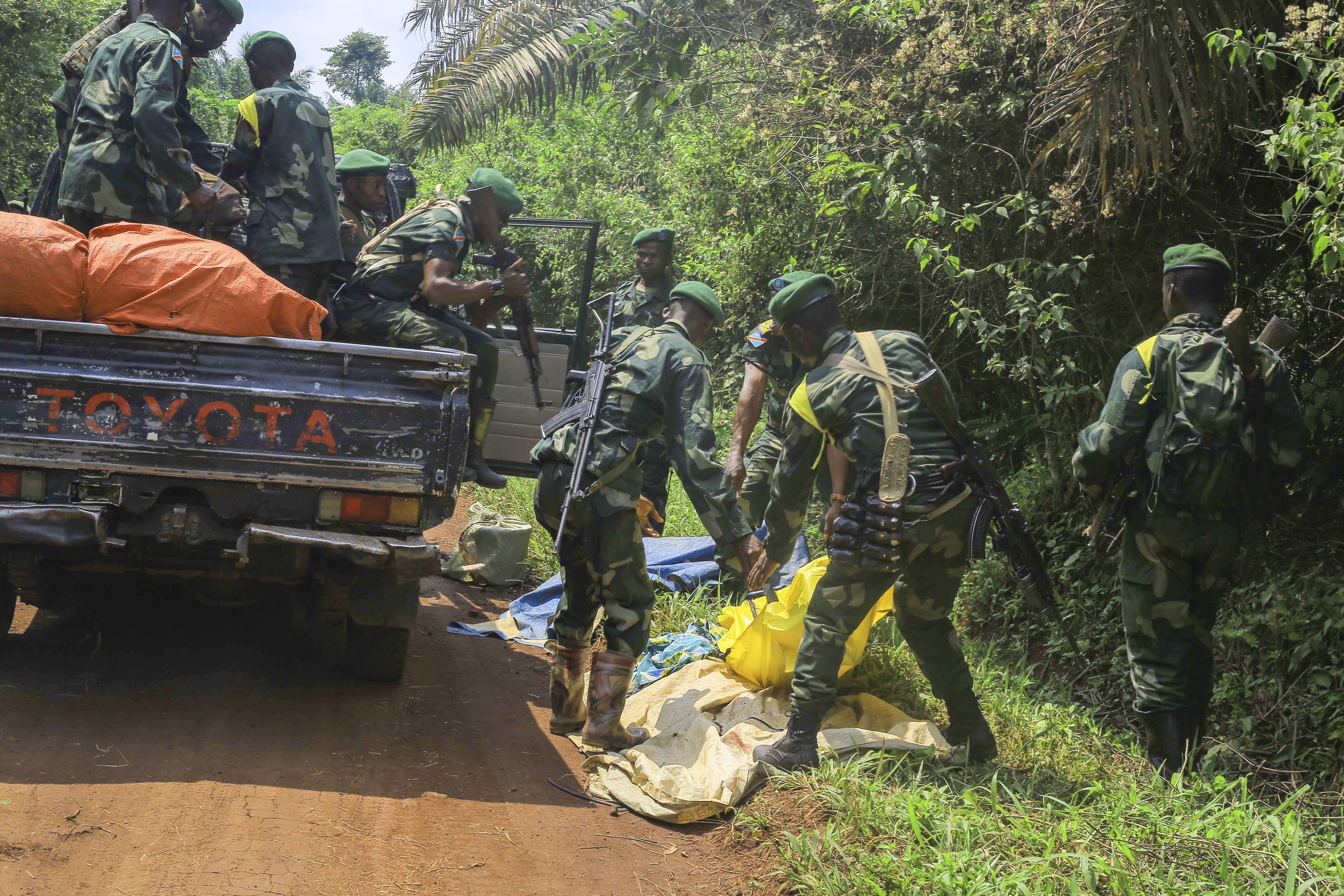 Congolese Defense Forces soldiers at the site of an attack near Oicha, Democratic Republic of Congo, in July Associated Press/Photo by Al-hadji Kudra Maliro (file)

Islamist militants killed at least 19 civilians last weekend amid ongoing violence in the eastern region of the Democratic Republic of Congo. Local authorities said the attackers looted several houses and set fires in the village of Kasanzi-Kithovo.

“I don’t know where to go with my two children,” villager Kahindo Lembula, who lost four of her relatives in the attack, told Reuters by phone. “Only God will help us.”

On Wednesday, rebels ambushed a stalled civilian convoy in eastern Congo and kidnapped about 20 people.

The government declared martial law in two northeastern provinces early in May amid rising violence blamed mostly on ADF. A contingent of U.S. special operations forces arrived in the region early in August to aid the Congolese army’s fight against the insurgents. —O.O. 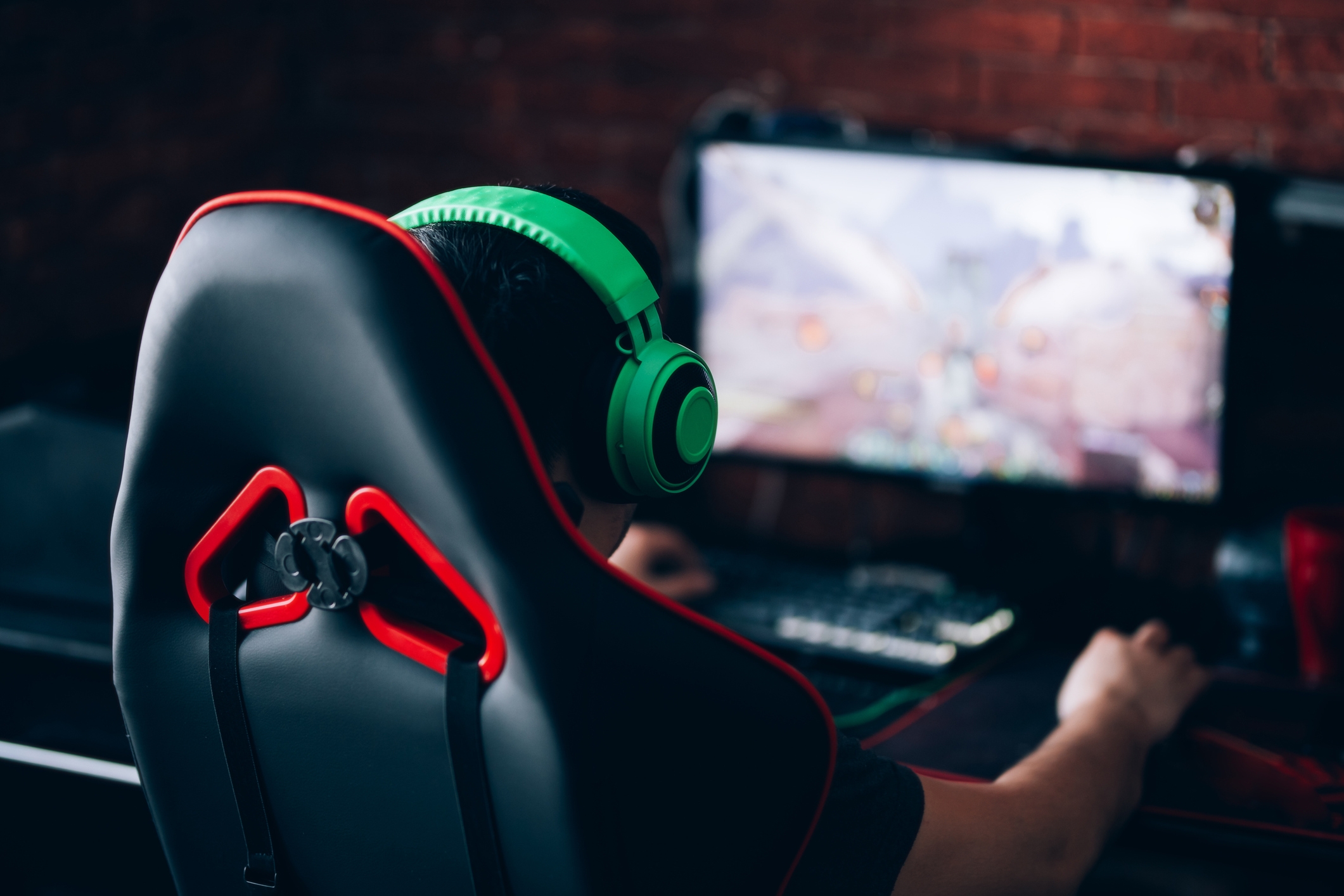 China published new rules on Monday to curb what it has called “youth video game addiction.” The National Press and Publication Administration asked gaming companies to only provide gaming services to children between Friday and Sunday from 8 and 9 p.m. for a total of three hours. They can also play for one hour on public holidays.

Companies also must ensure players use their real names after reports that children used adult IDs to avoid previous regulations.

The regulatory body said the new rules would “effectively protect the physical and mental health of minors.” It urged Chinese gaming companies to “always prioritize the social good and actively respond to societal concerns.”

China imposed similar regulations back in 2019 when it limited minors to only 90 minutes a day of gaming and banned it between 10 p.m. and 8 a.m. —O.O.

South Sudan disrupted regular internet services on Monday and security forces patrolled the capital city of Juba after activists called for demonstrations against the government.

A coalition of activist groups planned the Monday protests to coincide with President Salva Kiir’s opening address to parliament. The activists have accused the leadership of corruption and failing to provide stability. They pushed for Kiir to step down.

Police said the activists did not seek permission and warned that any gatherings would be illegal. Rights groups said authorities detained at least eight activists and three journalists ahead of the demonstrations. Several others said they went into hiding. “It is a peaceful protest; it is supposed to be non-violent but the government responded with violence,” said activist Wani Michael. —O.O.