Can tech really be kid-friendly?

The Google-owned company announced Wednesday it was rolling out updates for YouTube Kids to give parents more control over what their children are watching. Starting this week, parents can select certain channel collections (like Sesame Street or PBS Kids) they want their children to access, and when a parent turns off the search button, only videos verified by the YouTube Kids team will be recommended. Later this year, YouTube plans to add a feature that will allow parents to specifically handpick every video and channel available to their child in the app.

Released in 2015, the app was marketed as a safer video experience for children. But parents reported videos with profanity, violence, and sexual themes regularly slipped through the app’s filter because it relied on algorithms, not human viewers.

YouTube said this week the changes will give parents more oversight of YouTube Kids, but critics argue that is not enough.

“Giving parents more control doesn’t absolve YouTube of the responsibility of keeping the bad content out of YouTube Kids,” said Josh Golin, director of the Campaign for a Commercial-Free Childhood (CCFC). Golin contends most kids still use the regular YouTube app anyway.

Earlier this month, a group of more than 20 child-advocacy and consumer-protection groups, including CCFC, filed a complaint with the Federal Trade Commission, asking it to investigate whether YouTube’s data-collection and advertising practices violate federal child privacy rules. To abide by federal law, YouTube’s regular site contains a disclaimer that it is not for users under 13, but these groups argue the site’s kid-friendly videos and kid-luring ads for toys, theme parks, and sneakers prove the company knows it has millions of under-13 users and is profiting from their data.

“Despite the presence of literally millions of child-directed videos, and despite promising advertisers access to kids via YouTube ads, Google pretends that they aren’t responsible for the children on YouTube,” a CCFC statement noted. “Google knows kids are there, and they are not taking steps to protect their privacy. So we are.”

In January, Facebook faced similar criticism for its new messaging app for kids. Opponents claim the app is luring younger and younger users to its platform.

Despite the scrutiny, companies are still joining the kid-friendly tech party.

This week, Amazon announced a kid-focused update for its Alexa voice assistant. The software update, called FreeTime, is set for release May 9. In the new version, Alexa praises kids for asking polite questions (“Alexa, turn on the TV … please?”), and parents can set Alexa to go silent at bedtime, block music with explicit lyrics, and call the kids to dinner.

Of course, the update also comes with a new way to get more technology in childrens’ hands: an $80 Amazon Echo Dot speaker was designed for kids’ bedrooms with a colorful case and a two-year rough-and-tumble warranty.

Later this year, Fitbit plans to release the first activity tracker bracelet for children ages 8 and up. Parents, and inevitably Fitbit, will soon be able to track how much kids are moving and sleeping.

All these companies are getting around federal law by having underage users tied to their parents’ online profiles. But they are still marketing to children and harvesting their data. Only time will tell if red flag–waving child advocates can rein them in. 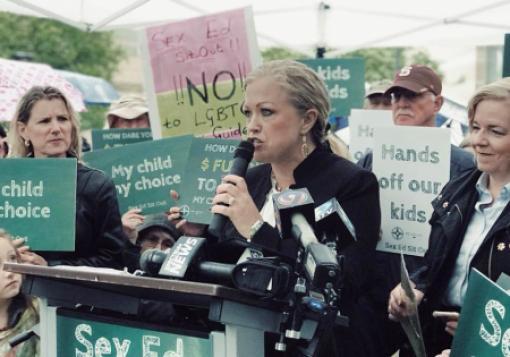 Blogger Elizabeth Johnston, also known as the Activist Mommy, at the Sex Ed Sit Out in Charlotte, N.C. Facebook

Since its launch in 2010, the U.S. government’s Teen Pregnancy Prevention Program has embraced a common narrative: Teen sex is normal, so sex education should teach teens how to reduce the risks with condoms and contraceptives because abstinence doesn’t work. Programs that encouraged delayed sexual activity—often called “sexual risk-avoidance programs”—were sidelined and defunded.

But that all changed last week. The Department of Health and Human Services Office of Adolescent Health announced a new funding opportunity for pregnancy prevention programs that requires them to communicate that teen sex is risky.

The announcement is a “breath of fresh air,” according to Mary Anne Mosack, executive director of Ascend, a national organization that advocates for sexual risk-avoidance education. Although the programs will include information about puberty, reproductive anatomy, sex, contraceptive efficacy, and disease transmission, it will be set in a context that emphasizes more than just the mechanics of sex.

“Teen sex is always about more than sex,” Mosack said. “Life impact must be part of the discussion. Identifying and building the protective factors that can help youth avoid sex, as well as other risk behaviors, must be part of our effort to help all youth thrive.”

Some parents are ready for a change.

Parents across the country on Monday pulled their children out of school for the “Sex Ed Sit Out,” a demonstration against the “dangerous and graphic” nature of sex education materials in school. Parents in seven states participated. Organizers argued current programs teach children too much, too young, and often without parental approval. —K.C. 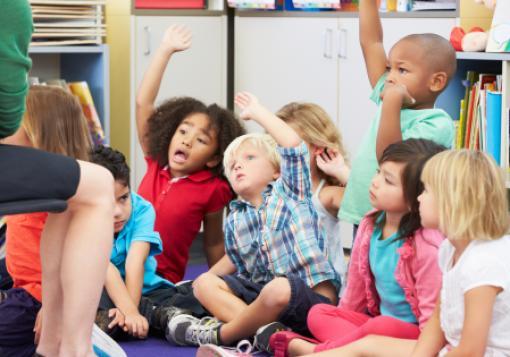 Blogger Elizabeth Johnston, also known as the Activist Mommy, at the Sex Ed Sit Out in Charlotte, N.C. Facebook

While some pro-family advocates push for better sex education in schools, others are defending the parental right to opt out from school presentations on sexuality that conflict with their religious beliefs.

The Orange County, Calif., Department of Education late last month published a memo informing parents that their rights to excuse their children from comprehensive sexual health education or HIV education did not apply to lessons on gender identity and sexual orientation. The school board’s general counsel, Ronald Wenkart, said opting out is only available for lessons that discuss “human reproductive organs and their functions.”

Wenkart offered parents who do not agree with gender identity theory or homosexuality only one patronizing option: “Parents are free to advise their children that they disagree with some or all of the information presented in the instructional program and express their views on these subjects to their children.” —K.C.

The U.S. Senate last week passed a rule change to allow senators to bring babies under age 1 on the floor and breastfeed them as needed. Last Thursday, Sen. Tammy Duckworth, D-Ill., the first sitting senator to give birth, brought her 10-day-old daughter, Maile Pearl, with her to cast her vote. Despite outside critics who argued the Senate floor should not be disturbed by crying infants or breastfeeding mothers, the vote was unanimous. “The Senate made the right call on this change,” Sen. Ben Sasse, R-Neb., posted on Facebook. “It sends a clear message that babies like Maile Pearl are welcome: in our lives, in our hearts, and on the Senate floor.” —K.C.

Investigators in California this week used a DNA match from an online genealogical site to identify Joseph James DeAngelo, 72, who is suspected to be one of the state’s most notorious serial killers. It turns out at-home DNA testing has another hidden use: it could help cold-case police investigators convict your blood relatives. —K.C.