Back to school under protest

Unions and school districts face off over fall reopening plans

Trouble started brewing in Iowa this summer when Gov. Kim Reynolds announced at least half of all schools must meet in person this fall. She pointed to the Centers for Disease Control and Prevention guidance showing COVID-19 posed little risk to children and transmission rates among kids and even between children and adults remained low. “With proper tools and resources, we can reopen safely protecting students, teachers, staff, and families,” the Republican governor said.

The state’s main teachers union pushed back, particularly against a requirement that schools seek state approval before offering only remote instruction. The Iowa State Education Association and Iowa City School District sued for exemptions to begin the school year online. Des Moines Public Schools filed a similar lawsuit on Aug. 25 seeking a waiver to the 50 percent requirement. Both of those districts are scheduled to return to school on Tuesday. Iowa City schools have a hybrid schedule that would satisfy the governor’s order, but Des Moines still proposes an almost fully virtual model.

The American Federation of Teachers, the second-largest teachers union in the nation, said that to reopen safely, schools had to have a local coronavirus transmission rate lower than 1 percent, an outside authority with the power to shut down schools if cases spike, and guaranteed accommodations for vulnerable staff members working from home. At its virtual convention in late July, the union’s executive council encouraged teachers to use advocacy, protests, negotiations, lawsuits, and even “safety strikes” in states that don’t meet its reopening standards. “Nothing is off the table,” AFT President Randi Weingarten said.

Whether the AFT’s actions and Weingarten’s rhetoric ignited or merely reinforced already brewing sentiments, teachers in Iowa and across the country followed the call to action throughout the summer.

The Florida Education Association in July sued the state’s Department of Education and other officials to block an order requiring schools to open for in-person classes. Florida’s number of COVID-19 cases is high but trending downward. A state appeals court struck down Florida’s reopening guidelines as unconstitutional on Monday.

In Detroit, protests, negotiations, and the threat of a strike all came into play. Detroit Public Schools Community District officials eventually brokered an 11th-hour deal with union leaders late last week to avert a strike and pave the way for classes to resume in-person and online on Tuesday. The deal includes a hard cap of 20 students per class and up to $3,000 of hazard pay for teachers.

New York City Public Schools, the nation’s largest district, just announced a delayed start to the fall semester after failing to reach an agreement with union officials on reopening. Districts in Los Angeles and Chicago, the second- and third-biggest school systems, respectively, opened completely online. Their leaders will need to sit down and outline a return to the classroom eventually.

Meanwhile, much of flyover country quietly prepared for the new school year. School children in Wyoming, Montana, Oklahoma, and the Dakotas all returned in August to a variety of scenarios: virtual, hybrid, and face to face.

Some families feel unheard in the quarreling of school leaders, unions, and advocacy groups.

Felicia Gonzalez told the Los Angeles Times that her 10-year-old daughter, Maria, thrived before the pandemic, earning awards for reading to younger students at her school in California’s Coachella Valley Unified School District. But when her school shut down, Maria had to use Gonzalez’s cell phone to access lessons. They ultimately gave up on the patchy solution, leaving Maria to complete printed worksheets the remainder of the year. Gonzalez said they are apprehensive about the district’s plans for a virtual start this fall: “She feels like she’s going to stay behind.” 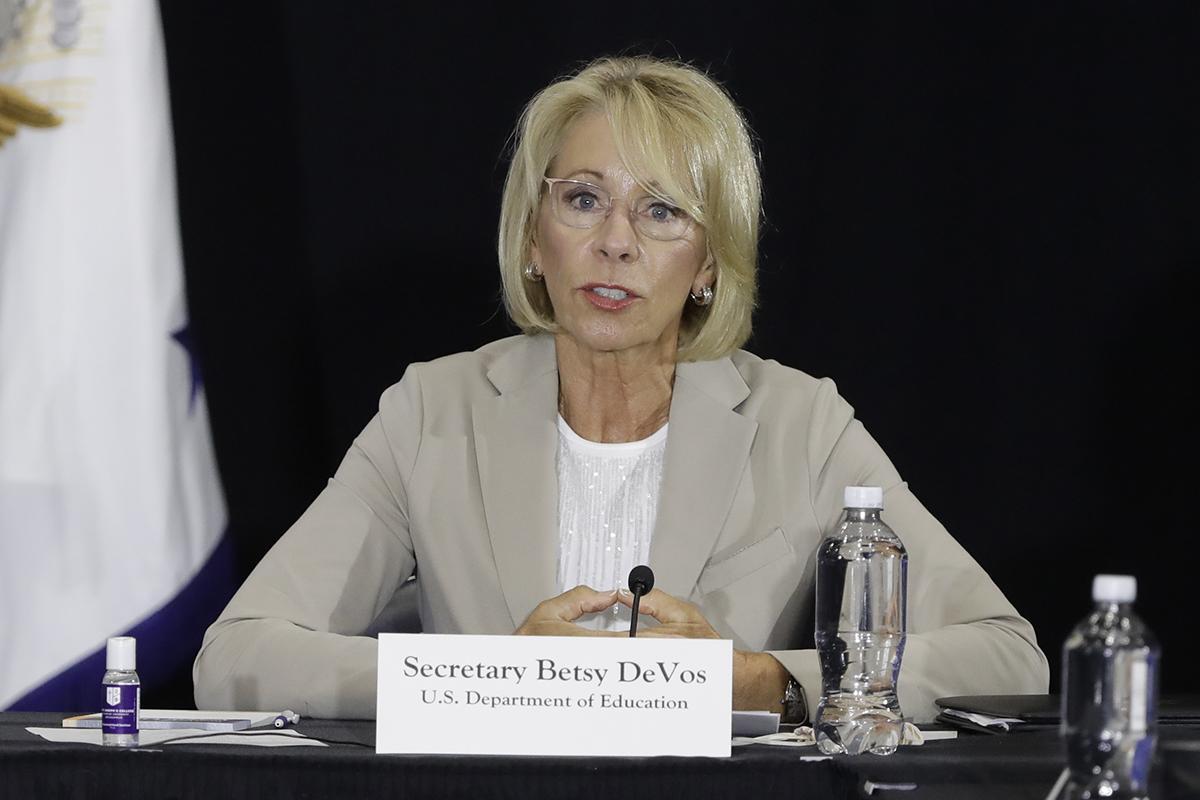 A federal judge last week temporarily halted the U.S. Department of Education’s rules for distributing more than $13 billion from the coronavirus relief package to the nation’s schools. A coalition of states and school districts filed several lawsuits this summer alleging the department’s rules contradicted the original legislation passed by Congress in March. The lawsuits have left the funds in limbo as schools prepare for the upcoming year.

States initially planned to release the funds based on the number of Title I low-income students in both public and private schools. But in April, the Education Department issued additional guidance that appeared to skew the formula in favor of private schools by accounting for all their students while only counting low-income students in public schools. The plaintiffs complain the new interpretation will unfairly redirect millions of dollars from struggling public schools to well-funded private ones.

Congress had “familiar and uncomplicated” language in its bill, and its intent was “plain as day,” U.S. District Judge James Donato of California wrote. He noted private schools had access to additional pandemic resources that public schools did not such as the Paycheck Protection Program.

But private schools said they will lose out if the lawsuits prevail.

“Congress included nonpublic schools in the CARES Act to ensure all students are treated equally, without prejudice due to the school they attend,” said Paul Long, president and CEO of the Michigan Catholic Conference. —L.E. 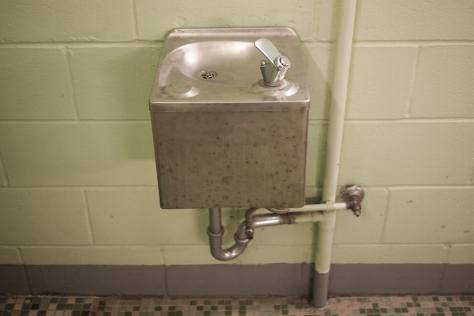 Several schools in Ohio and Pennsylvania last week reported they found Legionella bacteria in the water of sinks and drinking fountains following months of disuse. The bacteria breed easily in the stagnant water left in pipes for extended periods. When water flow restarts, the burst of pressure pushes the tiny bacteria into the air in inhalable droplets, potentially causing Legionnaires’ disease, a type of pneumonia.

The Centers for Disease Control and Prevention warned schools about Legionella back in May and recommended flushing pipes in preparation for reopening buildings.

A different kind of flushing piqued the interest of scientists at the University of Arizona in recent weeks. Following the lead of researchers in Israel and the United Kingdom, the university started testing campus wastewater for the coronavirus when students returned in mid-August. It successfully identified several asymptomatic COVID-19 cases in one dormitory, allowing health officials to head off an outbreak. —L.E.

A group of eight teachers sued northern Indiana’s White County Sheriff’s Department over the use of excessive force during a January 2019 active shooter drill at their school.

The teachers arrived at Meadowlawn Elementary School in rural Monticello, Ind., carrying cups of coffee and notebooks for scheduled professional development. They described feeling completely unprepared for the sudden onslaught of “verbal threats, expletives, and screaming” as representatives of the sheriff’s department conducted the training drill.

The officers lined up teachers and shot them in the back execution-style with airsoft guns. The high-velocity plastic bullets caused numerous injuries, including bruises and bleeding welts. Teachers also reported serious psychological trauma.

“The teachers displayed obvious signs of anguish and physical pain but were humiliated to find the law enforcement officers joking and laughing at them,” according to the complaint. “The terrifying and inexplicable experience left the teachers with lasting physical and emotional injuries.”

Two of the plaintiffs left teaching afterward. Several are still in counseling, and one was diagnosed with post-traumatic stress disorder. The sheriff’s department stated at the time that the training was voluntary and teachers were briefed on what to expect. —L.E.

Students everywhere groan at the sight of an essay covered in red ink but comfort themselves knowing one day they’ll escape the constant corrections of teachers.

No such escape exists for writers at The New York Times. Since late 2019, an anonymous Twitter user with the handle Typos of the New York Times has let nary a misplaced comma or disagreeing subject and verb escape without comment. The account regularly tweets out errors. Times reporter Adam Liptak said he can appreciate the account holder’s fastidious flair, but “he has yet to master a civil tone, has no sense of proportion, and seems to have no understanding of the pressures of deadline journalism in the internet age.” —L.E.