Are atheists overplaying their hand?

Christian Smith likes science, which he calls “one fantastic way to know many things about ourselves and the world.” He dislikes the way atheists have turned it into “an imperialistic, exclusivist, totalizing source of any and all legitimate knowledge about everything.” In Atheist Overreach, Smith points out that atheism’s advocates advance crucial claims that are neither rational nor realistic, and that “deeply personal pseudoscientific commitments” drive claims that science proves atheism. As physicist Steven Weinberg said in 2003, “Maybe at the very bottom of it … I really don’t like God.” Here’s more about the overreach, courtesy of Oxford University Press. Atheist Overreach made WORLD’s short list for 2018 Science Book of the Year. —Marvin Olasky

People the world over today are engaged in big struggles over the viability and importance of religion in personal and public life. Religions throughout human history have been an important feature of most cultures and have been practiced by billions of people. But the modern world has set in motion powerful forces of secularization and, as part of that, recurrent waves of activist atheism have confronted and criticized religion. Most recently in the West, the so-called New Atheism has pressed hard to discredit belief in God and undermine religious influences in society.

In much of Europe, Canada, Australia, and New Zealand, religious beliefs and practices have been declining for decades. The United States, however, appeared for a long time to be an exceptional case to trends of religious decline, seemingly remaining a bastion of religious vitality. Recent evidence suggests, however, that Americans are also starting to abandon religious beliefs and practices.1 The United States seems to be making a shift toward secularism.2 The arguments of the New Atheists have been among the influences behind that trend.3

Secularism and atheism are not only Western concerns. The forces of secularization and the message of atheism reach around the planet through “carriers” of globalization, such as higher education, the internet, mass consumer capitalism, and liberal politics. At the same time, in many parts of the world, religious leaders and communities of many kinds are pushing back hard against the pressures of secularism; they want nothing to do with what they view as a godless, secular way of life. At stake in this global struggle is the long-term character of human civilizations—whether religions will continue to have a significant place in human life or instead fade into implausibility and social irrelevance.

Central to this contest over religion and secularity are a set of open questions, the answers to which have big consequences for whether religions or secularism have viable long-term futures and how human societies might best be organized. One is What kind of moral standards are genuinely secular people justified in upholding? Do secularists have good reasons to be “good without God?” Or, if belief in God fades, will that have moral consequences that most people today would consider harmful? Another important question is How much can we rely upon the findings of science to know whether or not God exists? Can science deliver certainty about atheists’ claims? Or are the possibilities of human knowledge about God or gods or other possible superhuman forces not subject to scientific answers? A third key question is Are human beings somehow “naturally” religious? Does something about natural selection, cognitive wiring in human evolution, or some other factor make religious tendencies an ineradicable feature of human existence? Or could humans as a species actually leave religion behind?

At stake in this global struggle is the long-term character of human civilizations—whether religions will continue to have a significant place in human life or instead fade into implausibility and social irrelevance.

The outcome of today’s global struggle over religion and secularity hinges significantly on the answers to these questions. If people can carry on their personal and social lives with functional standards of morality that produce order, happiness, and flourishing, if science really can prove atheism, and if humans can readily leave behind their previously influential religious beliefs and practices, then humanity’s long-term future may very well look quite secular. On the other hand if religion actually plays an essential role in upholding desired moral convictions and behaviors, if the findings of science actually do not or cannot endorse atheism, and if it turns out that human beings in fact are “naturally religious” in some important ways, then we should expect religion to persist indefinitely into the future, despite the forces of secularization and atheism.

Many atheists today make bold claims about morality, science, and the naturalness of secular life. Atheists can be “good without God,” they insist, just as good as, if not better than, religious people. Atheism and the metaphysically naturalistic cosmos it heralds can sustain the received humanistic heritage of universal benevolence and human rights. Atheism is the clear truth as demonstrated by the evidence of empirical science. And a secular existence is within reach of humanity if only people would leave behind the superstitions of religion. Such claims are common among atheist activists. They have to be. For if atheism is not compatible with moral excellence, universal benevolence, human rights, the authority of science, and basic human nature, then its attractiveness is significantly diminished.

I believe these atheists are overreaching in all of those claims. They are not absolutely wrong. But they are overplaying their hand, trying to claim more for their viewpoint than reason and empirical evidence justify. Such overreaching must be called out. The issues involved are too important to let such unsupportable claims stand. Atheism will not benefit in the long run by staking out strong positions that do not hold up to scrutiny.

What I have argued and concluded is this: atheists have good reasons to adhere to a modest or moderately demanding morality based on enlightened self-interest and buttressed by social compacts and the punishment of defectors. But that kind of moral standard, if it is self-reflective and intellectually honest, ought not to expect people to provide equal treatment for all other humans, but rather ought to expect people to privilege those who are socially closest to them; and it will always be vulnerable to the doubts of moral skeptics and the exploits of “sensible knaves” who ethically free ride on others who are consistently good. This I think is as much ethically as atheism can justify.

Furthermore, the naturalistic cosmos that is the standard operating worldview of atheism cannot with rational warrant justify the received humanistic belief in universal benevolence and human rights. Historically in the West, those very demanding commitments germinated in the soil of theism were later transplanted into the religiously mixed grounds of the Enlightenment, flowered in the twentieth century after World War II, and diffused culturally through a variety of nonreligious and religious movements and institutions.

Science in no way demonstrates empirically or even by “inference to the best explanation” that the kind of transcendent God of the Abrahamic traditions of Judaism, Christianity, and Islam does not exist.

Moreover, contrary to some atheists’ claims, science in no way demonstrates empirically or even by “inference to the best explanation” that the kind of transcendent God of the Abrahamic traditions of Judaism, Christianity, and Islam does not exist. Atheists who maintain otherwise exhibit an inexcusably misguided understanding of both science and religions. A proper reading of these matters rightly concludes that science is inherently incapable of proving or disproving God’s possible existence. Overreaching atheists who are intellectually honest should moderate their claims that science empirically verifies their beliefs.

Finally, contrary to an atheist hope that human societies might readily become secular, human beings turn out to be strongly disposed to believe and practice religion. Humans are not naturally religious in the sense that religion is inevitable in human lives and social institutions. But we are naturally religious in the sense of possessing by nature not only the complex capacities but also the recurrent, strong inclinations to cognize, believe, and observe religious ideas and practices. Human societies and subcultures around the world are highly variable when it comes to religion and nonreligion. But atheists have little reason to be confident that human societies are on a path toward steadily increasing secularization. Atheist overreaching has tried in various ways to deny or ignore these realistic conclusions, which accomplishes little good for anyone.

3. To be clear, atheism is only one facet of the much larger and more complex phenomenon of secularization. Atheism ought to be understood as one aspect of secularization, but the latter cannot and should not be reduced to the former. This book focuses on atheist intellectual arguments; I have written elsewhere about secularization, in Christian Smith, 2017, Religion, What It Is, How It Works, and Why It Matters. Princeton: Princeton University Press. 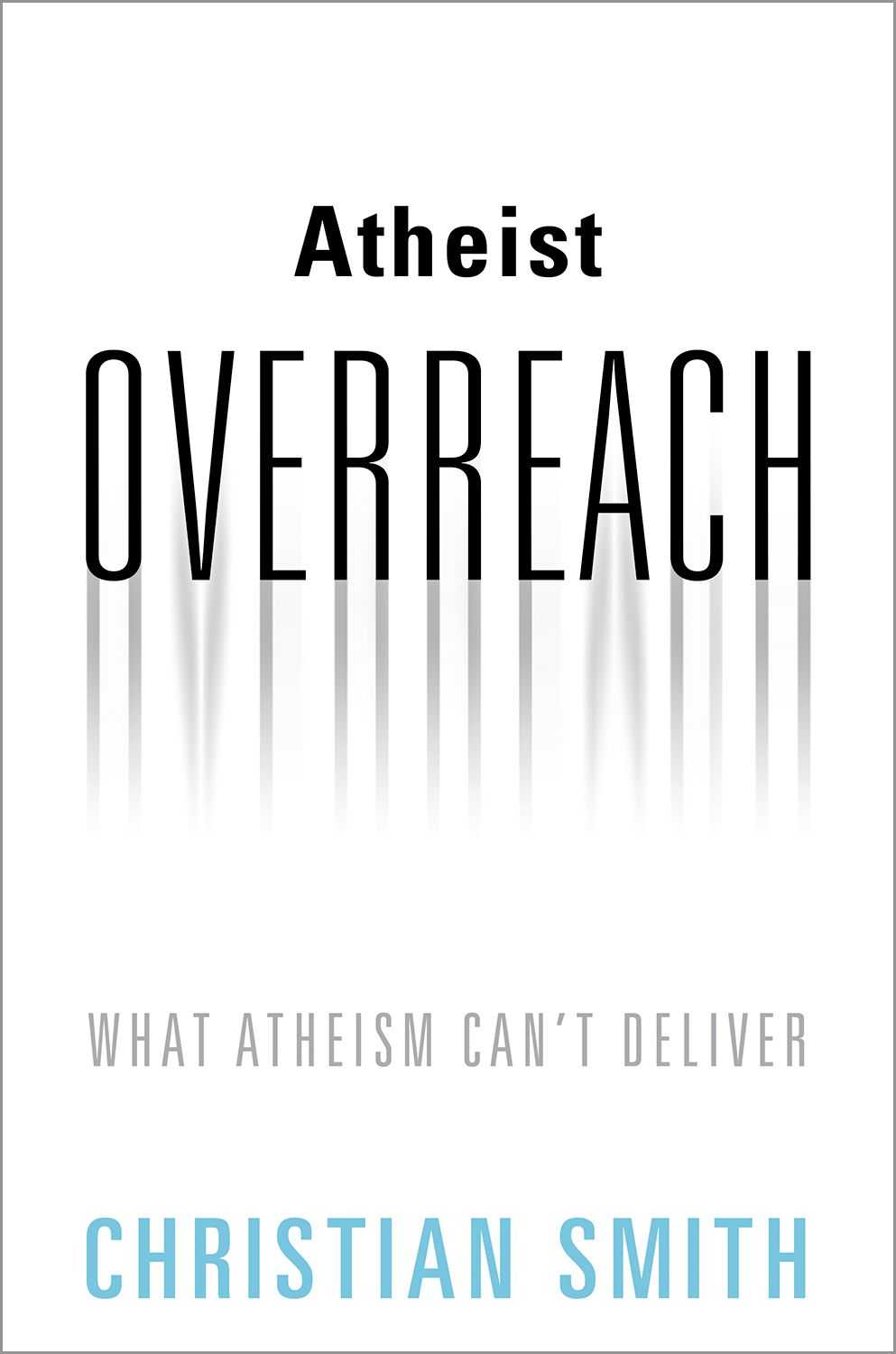