Another cross can stay

Federal appellate judges moved to preserve a historic county seal that features a cross, signaling a shift away from anti-religious precedent. The 3rd U.S. Circuit Court of Appeals said in its unanimous opinion that the cross on the Lehigh County, Pa., seal does not establish a state religion in violation of the First Amendment to the U.S. Constitution. The cross represents the county’s early German settlers who fled persecution in their homeland seeking religious freedom in America.

The Lehigh County case was the first in the country to apply a U.S. Supreme Court decision from June in favor of a historic 40-foot cross monument to fallen World War I soldiers in Bladensburg, Md. In that splintered ruling with multiple opinions, six justices appeared to agree that the Lemon test—a precedent that asks whether a reasonable observer would interpret a governmental action as an endorsement of religion—didn’t apply to cases involving religious references or imagery in public monuments, symbols, mottos, displays, and ceremonies.

The 3rd Circuit rejected any notion that the cross—which is set among a grain silo, the Liberty Bell, a heart, and textile mills and has existed without objection for 70 years—was intended to deliberately disrespect adherents of other faiths or nonbelievers. Like the Bladensburg cross, the court said the seal had become a part of the community, which could “retain or remove it in keeping with the First Amendment.”

Diana Verm, a senior counsel for Becket, which represented the county, told me that the 3rd Circuit’s reading of the Bladensburg cross case as a clear abandonment of the Lemon test provides an example for future courts.

“What we learn from the Bladensburg and Lehigh County cases is that the writing is on the wall for the use of the Lemon test in cases involving not only the historical but also the more recent use of religious imagery,” she said. “There are ways that communities can honor religion as part of their citizens’ lives, history, and culture without violating the establishment clause.”

She pointed to language in the Bladensburg case that says communities can properly use religious imagery by honoring the dead in cemeteries and erecting monuments recognizing public figures for whom religion was important, like Martin Luther King Jr. and Mother Teresa.

Future cases will have to determine the scope of the protection offered by the Bladensburg and Lehigh County cross decisions. At least one court is considering it now: In June, the Supreme Court ordered the 11th Circuit to reconsider its ruling against a 78-year-old cross in Pensacola, Fla., in light of the Bladensburg cross decision. 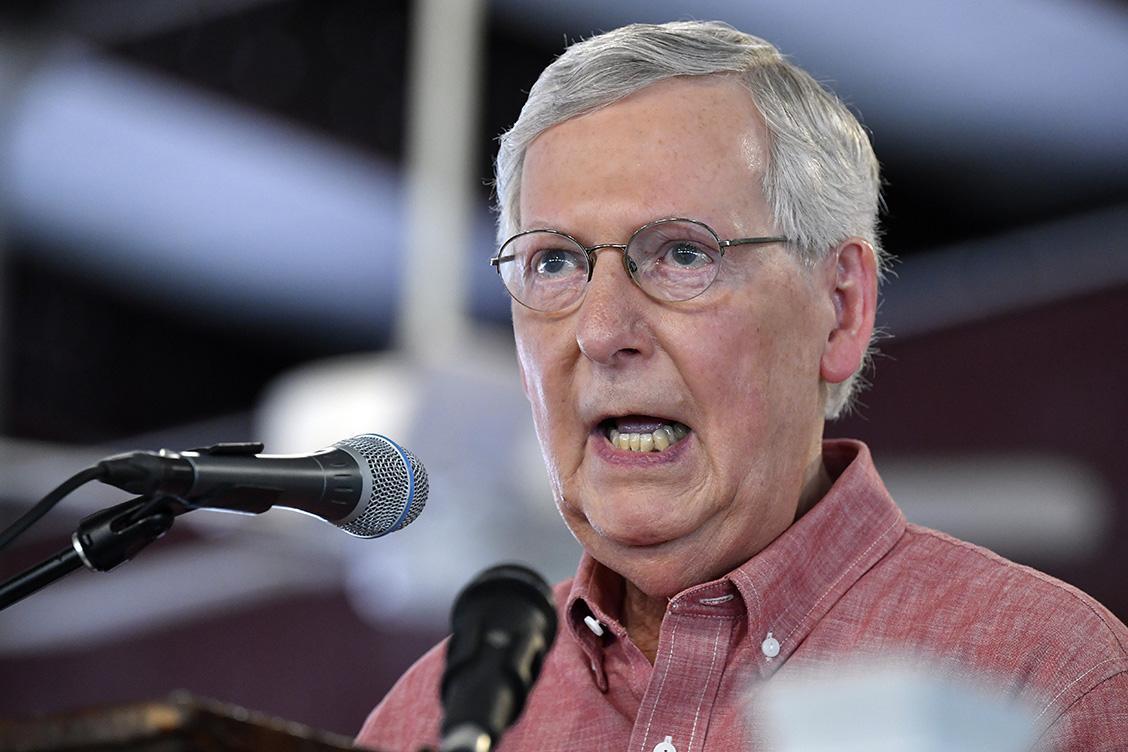 “After multiple appeals from affected users and Leader McConnell’s team confirming their intent to highlight the threats for public discussion, we have reviewed this case more closely,” Twitter said in a statement Friday afternoon. The post was back up—with the offending video and a warning message—after the announcement.

Conservatives have repeatedly accused large tech companies of suppressing their voices. Hearings before the Senate Judiciary Subcommittee on the Constitution in April, chaired by Sen. Ted Cruz, R-Texas, turned up plenty of anecdotal evidence but few answers from tech leaders.

Some contend the workplace culture at large tech companies rewards liberals while silencing and shaming conservatives. In June, a California Superior Court judge ruled Google ex-engineer James Damore and another employee could move forward with a class action lawsuit claiming the company discriminated against them because they are white or Asian men who support conservative politicians like Trump. —S.W.

A former Mormon sued the religion’s leaders in Utah last week in what amounts to an indictment of their system of belief.

Laura Gaddy, a North Carolina resident and former Mormon, seeks punitive damages for an alleged fraudulent scheme perpetrated for generations by the “Mormon Corporate Empire.” The 75-page complaint strikes at the heart of the religion’s doctrine, calling into question the credibility of founder Joseph Smith’s accounts of the origin of the Book of Mormon, which he published in 1830.

Mormons believe Smith collected gold plates, which were inscribed in reformed Egyptian by ancient Americans with Hebraic DNA, and translated them into the religion’s signature text. Those outside of Mormonism do not accept the Book of Mormon as inspired or authoritative.

A federal appeals court upheld the dismissal of a church organist, finding the anti-discrimination protections of federal law do not apply.

A Catholic parish in Chicago hired Stanislaw Sterlinski as its director of music in 1992. In 2014, the parish priest demoted him to the job of organist and then fired him in 2015. Stanislaw claimed he was fired due to his Polish heritage. He argued Title VII of the Civil Rights Act of 1964 protected him since the ministerial exception, which allows churches to discriminate in the hiring and firing of ministers, did not apply after his demotion to organist.

The 7th Circuit U.S. Court of Appeals’ opinion accepted the church’s argument that Stanislaw remained a minister, and thus subject to the exception, due to the importance of music in the life of the church. “If the Roman Catholic Church believes that organ music is vital to its religious services, and that to advance its faith it needs the ability to select organists, who are we judges to disagree?” asked the court. —S.W.

A court ruling based on, "the seal had become a part of the community" is a slippery slope.  All cross cases that are won are due to historic precedent.  Well, what about the future?  They are basically saying that old offensive things can remain, and they never have to rule on the actual constitutionality of making new crosses.  It is a very weak ruling that protects only a single cross at a time.

Re: Mormonism on Trial

As a broader note, I find it perplexing that these notes get buried in larger articles. Each of the subsets of this article could stand alone on its own merits, but you'll never find them unless you click on the cover article or (sometimes) you may get some notification of them if you subscribe to email updates.

As an observation on the broader topic of Mormonism, the church's campaign to be referred to not as Mormons or as LDS, but as the Church of Jesus Christ of Latter Day Saints, seems not to be going well. Either "Mormon" or "LDS" is short and compact, not to mention buttressed by generations of common usage. The longer name of the church is anything but compact. Not many people are going to make the change. I observe that not even many of the LDS faithful seem able to consistently make the change. This article inadvertantly underscores the difficulty of what church leadership is after.