An economic boom for some

A thriving job market is good for those with the right training, but manual jobs are harder to find

While serving on the board of a homeless shelter in Indianapolis between 2002 and 2012, David Palmer sometimes led Bible studies for the people staying there. He regularly heard a similar refrain.

“When I would go, I would typically ask people, ‘How are you doing?’” he recalled. “And the answer was so often, ‘I’m looking for a job.’ And I heard that over and over and over again.”

The problem wasn’t a weak economy—the men at Wheeler Mission struggled to find jobs even when it was strong, Palmer said. He listed several reasons: a felony record, a history of drug or alcohol abuse, no transportation, minimal if any prior work experience, living in a homeless mission, poor language skills, and no one to vouch for their work performance. Palmer said someone leaving addiction, prison, or homelessness typically earned $8 to $10 an hour—less than $17,000 per year.

The U.S. economy currently is strong, with low unemployment and plenty of jobs, but the numbers can be deceptive. The available jobs pay more but also require more skills and education than in the past. People without the right training, especially those who are homeless or leaving prison, can struggle to land a job capable of supporting an independent life or a family.

Palmer came up with a solution for his community: Purposeful Design, a woodworking business that employs men leaving homelessness and addiction, and WORLD’s 2019 Northeast winner in the Hope Awards for Effective Compassion. Woodworking does not require specific education or experience. But jobs like that are a shrinking subset of the American economy, creating more challenges for poverty fighters and the people they want to help.

Industries like manufacturing, construction, and agriculture historically offered people a chance to learn a trade, work hard, and earn a decent income without extensive education. As technology has advanced and manufacturing jobs have moved overseas, the American economy has shifted so that most lower-paying jobs are in the service industry, and most higher-paying jobs are in technology. The service industry—including hospitality, retail, restaurants, and entertainment—tends to offer fewer hours and less stable pay than manufacturing and other traditional manual labor. Many low-wage workers have multiple part-time jobs but don’t receive benefits from any of them.

“All affluent societies are service economies—there are no exceptions,” wrote Nicholas Eberstadt, an American Enterprise Institute scholar. The United States has not automated its industries at the rate of other countries like South Korea, but it is steadily becoming a high-tech economy, with mixed consequences.

“If you are lucky enough to have had access to good education and training in skills from your employer, then you’re much, much better off [in today’s economy] than you were before,” another AEI scholar, Aparna Mathur, explained. “On the other hand, if you did not get the right education and the right skills training, then you’re much worse off than you were before.” She added that the economy is not likely to shift back toward manual jobs like manufacturing or construction.

Each month, the U.S. Private Sector Job Quality Index (JQI) uses Bureau of Labor Statistics data to report how many production and nonsupervisory jobs offer weekly incomes above and below the average for that industry. The JQI report released in December showed that in 1990 there were approximately 94 jobs with weekly pay above the average for every 100 that paid below average. In December 2019, that number fell to just under 81.

But the tight labor market is pushing employers to open the doors to more people. Some tech companies like Google and Amazon offer paid on-the-job training, and South Carolina has created an apprenticeship program with tax credits for employers who participate.

“I think on average we need to invest much more in skills training and education … so that everybody is able to take advantage of the economy we’re seeing today,” Mathur said.

This shifting economy changes what poverty fighting looks like, as well.

Instead of expecting homeless people or others to just “get a job,” Christians must recognize the barriers facing people looking for work. Helping someone find a job may require connecting them with educational opportunities or helping with transportation or childcare. It could even mean imitating David Palmer, who started a business that offered more than just a job.

“We’re not here just to teach woodworking or just to offer a paycheck, but to get under the skin,” he said. “And we know that begins with heart change.” 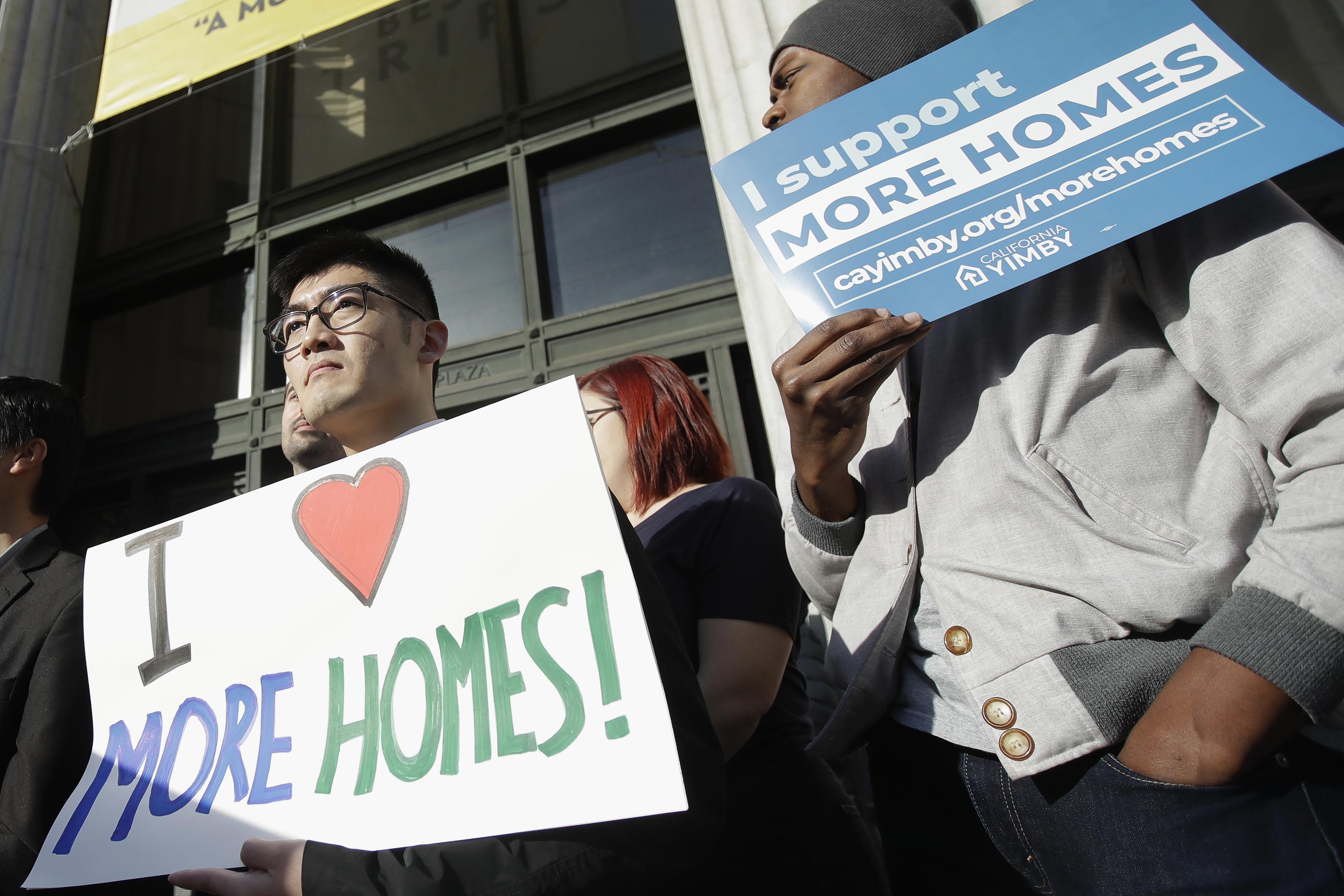 Protesters demand more funding for housing the homeless on Jan. 7 outside the Oakland City Hall. Associated Press/Photo by Jeff Chiu

California Gov. Gavin Newsom announced a plan to make use of old emergency trailers to fight the state’s homelessness problem.

The governor’s office on Thursday deployed 15 Emergency Medical Services Authority trailers and medical service tents to an empty government lot in Oakland, Calif., to illustrate the plan. The trailers originally housed people displaced by wildfires. Newsom ultimately plans to deploy some 100 trailers throughout the state.

This month, Newsom, a Democrat, also announced a proposal for $750 million to build or subsidize more affordable housing. The plan needs the state legislature’s approval before it can take effect. California has 12 percent of the country’s population but nearly half (47 percent) of the nation’s homeless people. The state has implemented a variety of attempted solutions that often assume homelessness is primarily a housing problem rather than a work or safety net problem. But the population on the streets keeps going up. The latest numbers from the U.S. Department of Housing and Urban Development reported 21,306 more people experienced homelessness in California in 2019, a more than 16 percent increase over the previous year. —Rachel Lynn Aldrich

Pushing back on SNAP changes

As of Monday, 15 states, New York City, and the District of Columbia had joined a lawsuit against the Trump administration to stop it from tightening work requirements for food stamps.

Previously, states could override the rules and extend Supplemental Nutrition Assistance Program benefits to individuals who did not meet the expectation of working a minimum number of hours over a set period of time. Last month, the U.S. Department of Agriculture moved to limit how and when states can make exceptions. The change is set to take effect in April. —R.L.A.

I could not believe the quote above that "all affluent economies are service economies" with no reasonable questioning of such an assertion. (By the way - the article misquotes the original source). It is the service economy that is giving us a gulf between income expansion and income stagnation. The background source is written by, and uses sources that seldom get into the field of the economy - they are in their ivory tower.

The service economy, and those that are curated at a host of Community Colleges and the like are on the low end of the economy and their roles have a swift turnover - peopel are sticking less than 5 years in the supposed field of the service economy.

You want to know who the wealthy are, they are part of the creation economy. They create either real or intellectual property. Wealth si growing among those who create and secure a patten. It's the technology creators, the value added creators, the artisans who are creating wealth.

The intellectual economists have been delivering terrible wisdom for almost two generations.

You want to work on poverty? Dump the service economy tiara and reengage the creative economy in all sectors of human living.