Separating fact from fiction about the rainforest fires

A fire smolders in Altamira, Brazil, on Monday Associated Press/Photo by Leo Correa

More than 74,000 fires raged in Brazil’s Amazon region as of Tuesday—an 84 percent increase from last year. Many news outlets—and French President Emmanuel Macron—referred to the Amazon as the “lungs of the earth,” claiming its foliage produces 20 percent of the world’s oxygen. Alarm has peaked over the past week or two, with #PrayforAmazonia going viral on Twitter. But scientists are coming forward to correct the record on the real risks and effects of the fires.

Dan Nepstad, an expert on the Amazon and lead author on the Intergovernmental Panel on Climate Change, told Forbes writer Michael Shellenberger that the “lungs of the earth” claim had “no science” behind it. Environmental scientist Jonathan Foley, who works for a climate change advocacy group, said the same. He told Science News the 20 percent estimate is far too large. Ocean plant life and other tropical rainforests do much of the global photosynthesis, and the real amount of oxygen produced by the Amazon is closer to 5 percent at most, Foley said.

Reports also suggested the Amazon has more fires this year than ever before. While this year is worse than last year, Foley pointed out Brazil saw similar or worse fires in the 1990s and early 2000s.

Foley, Nepstad, and others have expressed concerns over deforestation disrupting the Amazon and hitting a “tipping point” that eventually turns the whole forest into a savannah. But even as Foley called the possibility “kind of terrifying,” he said the predictions were hypothetical scenarios based on “some computer models, but not all of them.” Like all models, they are only as good as the assumptions and data the scientists plug into them.

The wildfires bring to light the wrestling match in Brazil involving a complicated mix of stakeholders. Paulo Moutinho, a co-founder of the Amazon Environmental Research Institute, said the blazes are likely tied to development. People often set fires to clear land for farming or logging, but they can easily get out of control.

Brazilian President Jair Bolsonaro has rolled back certain rainforest protections to open up the region for development, and many international governments and organizations blame him for the fires. Bolsonaro, in turn, has vaguely accused nongovernmental organizations of starting the fires to make him look bad and pushed back on international efforts to help fight the flames. He has support from many Brazilian farmers who worry international groups will take away their livelihoods through extreme environmental policies.

Along with an estimated 20 percent of Earth’s plant species and many animals found nowhere else, about 1 million indigenous people live in the Amazon. Indigenous groups hold about 13 percent of Brazilian land, most of it in the rainforest. The fires have intensified the strain between them and Bolsonaro, who blames indigenous protection policies and forest reserves for limiting the Brazilian economy.

What can the Amazon teach us about stewardship?

Nepstad noted Bolsonaro rose to power in Brazil as a backlash to the “dogmatism” of environmental groups pushing extreme protectionist policies on local farmers. Shellenberger suggested a more balanced approach that doesn’t discount the need for development in Brazil on the one hand or treat resources as something to be merely drained on the other. That middle ground, whether Shellenberger recognizes it or not, may be the Biblical idea of stewardship, in which humans are gardeners appointed by God. 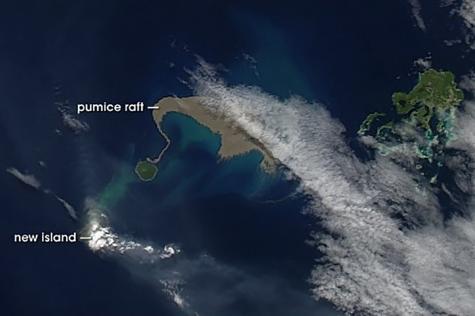 A satellite image of the pumice raft on Aug. 10 NASA/Jesse Allen

A vast floating field of pumice in the South Pacific could restock the shrinking Great Barrier Reef. Shortly after reports of a possible underwater volcano eruption on Aug. 7, people began encountering islands of floating lava rock in Polynesian waters. On Aug. 15, the crew of the catamaran Roam posted on Facebook they had run into a “rubble slick made up of rocks from marble to basketball size such that water was not visible,” along with a sulfur smell.

The so-called pumice raft has grown to roughly 58 square miles, or the size of 20,000 football fields. Some think the rocks could eventually sink near the Great Barrier Reef off Australia and become part of the natural habitat.

“Based on past pumice raft events we have studied over the last 20 years, it’s going to bring new healthy corals and other reef dwellers to the Great Barrier Reef,” said Scott Bryan, a geologist with the Queensland University of Technology. The reef has lost half of its corals since 1985, according to the National Academy of Science. “At the moment the pumice will be bare and barren, but over the next few weeks it’s going to start getting organisms attached to it,” Bryan said. “Then they’re going to grow and diversify, to ultimately wash up here in Australia.” —Samantha Gobba

A black hole about 900 million light-years away apparently “swallowed” a neutron star—a very small, dense star left after a massive star collapses. The collision sent a pulse of gravitational waves into space, and three detectors in Italy and the United States picked up the ripples earlier this month.

Patrick Brady, a spokesman for Laser Interferometer Gravitational-Wave Observatory, which has detectors in Washington and Louisiana, called the event a “huge milestone—if it stands up.” Scientists have been searching for instances of neutron stars colliding with black holes, inescapable gravitational fields created when a star collapses completely.

“We have always thought that there should be binary systems of a black hole and a neutron star circling each other out in space, so if this event is confirmed, it would be the first evidence that such systems do actually exist, and that some of them are spiraling closer and closer and eventually smashing together,” Australian astronomer Susan Scott said. —S.G.