ALGERIA: “All churches in Algeria are at risk of closure,” reports an officer with the World Evangelical Alliance. In the last seven weeks, authorities have closed 12 evangelical Protestant churches, including two of the country’s largest under a 2006 ordinance that restricts non-Muslim worship.

LEBANON: Protests also rage on across tiny Lebanon, with anti-government marchers closing major roads Monday in Beirut after forcing the government to resign last week. Popular anger in the Arab world is, again, creating an opening for ISIS.

SYRIA: A medic attached to a U.S. aid group was killed on Sunday by mortar fire from Turkish forces north of Tel Tamer. Dave Eubank, director of Free Burma Rangers, reported that Zau Seng, a Kachin worker serving from Burma (also known as Myanmar), was hit and an Iraqi-born translator wounded as the group worked at evacuating the wounded. Turkey has continued assaults in the northeast area that’s outside the agreed “safe zone” that Eubank calls “a zone of invasion and a zone of death.”

MEXICO: The U.S. effort to curb the opioid fentanyl is what was behind last week’s botched arrest of Ovidio Guzmán, a son of Joaquín “El Chapo” Guzmán, the Sinaloa cartel drug kingpin now imprisoned in the United States.

There’s been no word on Protestant pastor Aarón Méndez and his co-worker, who were kidnapped in Nuevo Laredo on Aug. 3.

IRAN: Ebrahim Firouzi, 33, a Muslim convert to Christianity who has been jailed since 2013 for “propaganda against the Islamic Republic,” was released but must now serve two years of internal exile in the remote southeastern town of Sarbaz.

It’s the 40th anniversary of the takeover of the U.S. Embassy in Tehran, which launched a 444-day hostage ordeal and proved pivotal for Iranian Jews like 18-year-old Jacqueline Saper, now living in Illinois.

FRANCE: A photographer waited days for museumgoers to match the works they came to see. 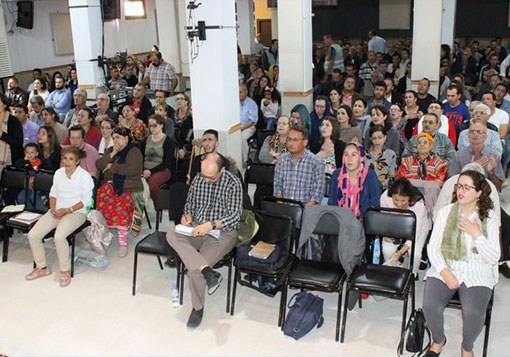 The Protestant congregation in Tizi Ouzou worshipping prior to the church’s closing. Facebook/Église Protestante d’Algérie