A very strange Christmas in Europe

European nations set ground rules for holidays with the coronavirus

But this year, the square is mostly bare, without the shops, crowds, or lights. Frankfurt announced the markets, scheduled to run from Nov. 23 to Dec. 22, would not open. The scene is reflected across many other European countries as authorities scramble to avoid another wave of COVID-19 over the Christmas holiday.

The Robert Koch Institute, Germany’s national disease control agency, on Wednesday said the country recorded 590 deaths over 24 hours—its highest daily death count since the pandemic began. German officials extended a partial lockdown to Jan. 10. But they eased restrictions from Dec. 21 to Jan. 1 to allow private gatherings of up to 10 people from separate households. The southern German region of Bavaria, which has the country’s highest death toll, announced people could only leave their houses for essential reasons starting Wednesday until Jan. 5. A nighttime curfew would also apply in some hotspots. “The situation is unfortunately serious,” state Premier Markus Söder said Sunday. “We must do more, we must act.”

Other countries are rolling out their holiday plans. France adopted a similar approach to Germany and excluded Christmas Eve to New Year’s Eve from a nationwide curfew that begins Tuesday. Switzerland allowed ski resorts to open as long as people wear masks and follow specific guidelines. Austria emerged from a second lockdown on Dec. 7 but closed Christmas markets and hotels until Jan. 7.

Italy took a harder tack. Prime Minister Giuseppe Conte this month said Italians could only travel across regions for work or emergencies from Dec. 21 to Jan. 6. The country shut down ski resorts and required churches to reschedule midnight masses to honor the 10 p.m. curfew. More than 58,000 people have died of the virus in Italy, and the nation reported 993 deaths on Dec. 3—the highest since it was a global hotspot in March. “It’s clear this will be a Christmas that is different from the others but it will be no less authentic,” Conte said.

Across the United Kingdom, people from up to three households will be allowed to form Christmas bubbles for five days from Dec. 23 to Dec. 27. The restriction will allow people in each bubble to visit places of worship or outdoor public spaces. Individual countries inside the U.K., like Wales or Scotland, can impose tighter rules. Britain began administering BioNTech’s COVID-19 vaccine this week, but authorities urged people to obey safety requirements.

Spain has continued to record a decline in infections, but its contagion rate is still more than nine times higher than its goal of 25 infections per 100,000 people. The government instructed people not to travel out of their regions from Dec. 23 to Jan. 6. Authorities pushed back curfews to 1:30 a.m. on Christmas and New Year’s Eve, and allowed gatherings of up to 10 people.

“We’re heading in the right direction, but we still have a long way to go to bring down contagion,” said Carolina Darias, Spain’s minister of territorial policy. “The goal isn’t just to celebrate this Christmas, but many more to come.” 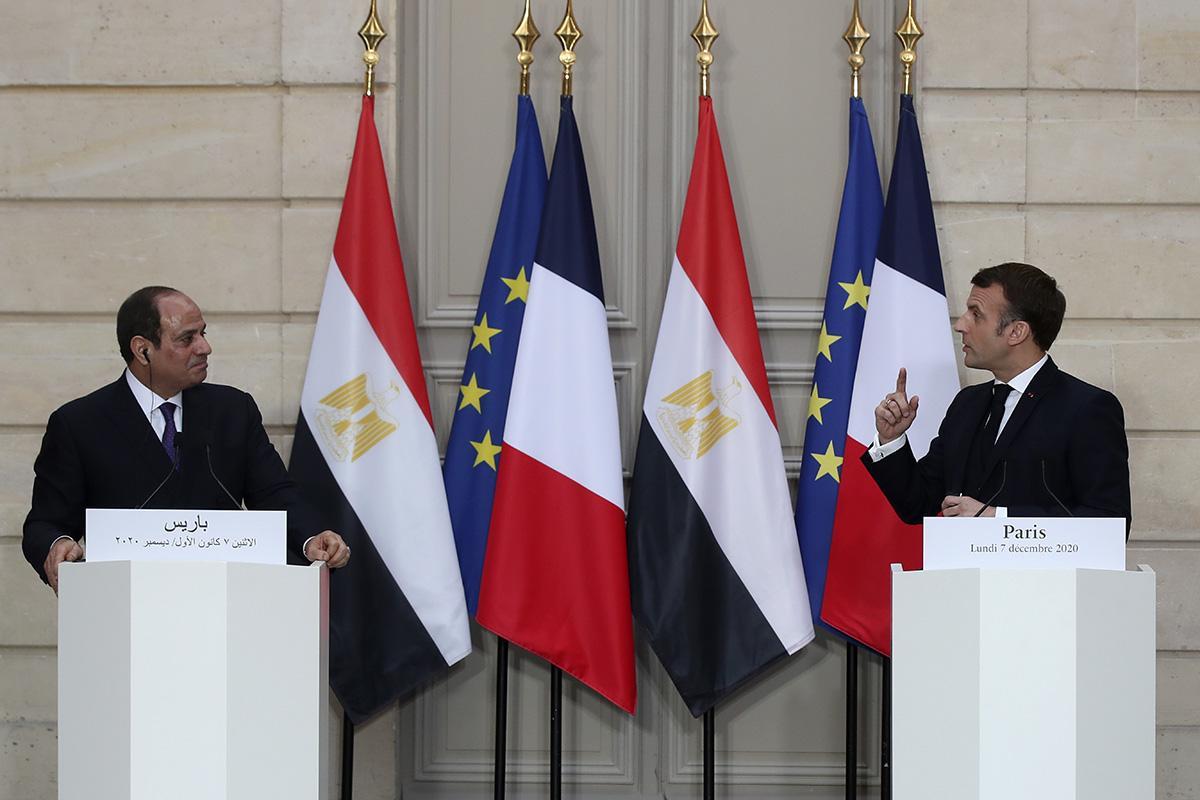 French President Emmanuel Macron said he would not require Egypt to improve its human rights record before finalizing arms sales to the country.

“It is more effective to have a policy of demanding dialogue than a boycott which could only reduce the effectiveness of one of our partners in the fight against terrorism,” he said at a joint Monday press conference with Egyptian President Abdel Fattah al-Sisi.

France has sold weapons to Egypt several times since 2015 to aid its fight against insurgency in the country and in Libya, but the contracts have ended. An Islamic State offshoot has repeatedly targeted the minority Coptic Christian community in the country’s north.

Al-Sisi’s government faces accusations of cracking down on dissent. Authorities detained three human rights advocates in November for meeting with foreign diplomats and released them days before al-Sisi’s meeting with Macron. In a joint statement this month, 17 rights organizations including Amnesty International and the Egyptian Human Rights Forum said France has long indulged al-Sisi’s repression: “Egypt has made it crystal clear that it misuses counter-terrorism legislations to stamp out legitimate human rights work and uproot any peaceful opposition.” —O.O. 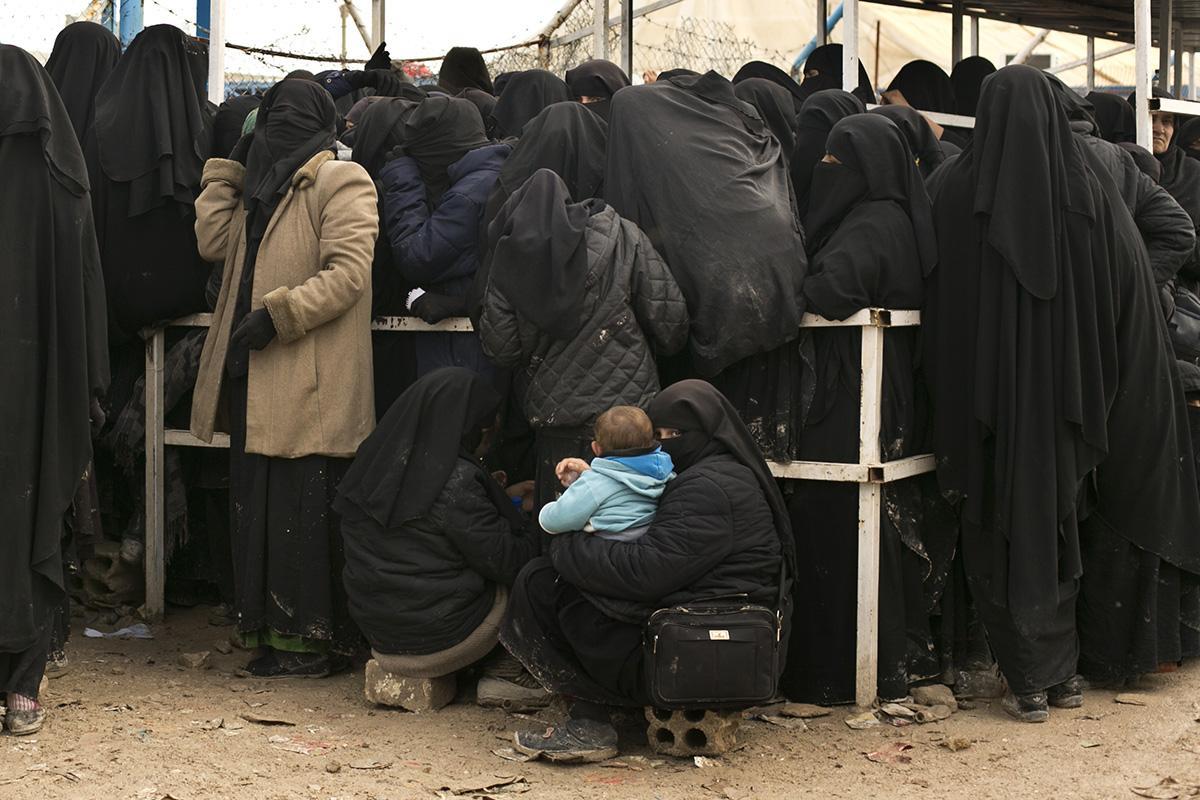 Uzbekistan on Tuesday repatriated 25 women and 73 children from displacement camps for families of Islamic State members in northeast Syria. The government said it would screen the returnees at a medical facility before helping them find jobs and accommodation: “The necessary conditions will be created for them to return to a peaceful life and fully adapt to society.”

Kurdish fighters have imprisoned thousands of militants and kept their wives and children in camps since seizing control of northern and eastern Syria. In August, the United Nations children’s agency said eight children died at the Al-Hol camp in less than a week as the pandemic worsened already dire conditions.

Uzbekistan repatriated 220 women and children from Syria last year, but many western nations have stalled similar returns over terrorism concerns. “This shows that repatriation of foreign children from Syria continues to be possible, when there is will to do it,” Save the Children’s Syria Response Director Sonia Khush said. —O.O.

The United Nations on Monday named Dec. 27 International Day of Epidemic Preparedness. The UN General Assembly said the resolution emphasizes the importance of stronger global health systems to respond to outbreaks like the coronavirus. COVID-19 has infected more than 68 million people and killed more than 1.5 million around the world.

Vietnam’s UN Ambassador Dang Dinh Quy, who introduced the text, said COVID-19 would not be the last outbreak: “The pandemic caught us off guard, but it also has served as a wake‑up call for improving our preparedness.” —O.O.

Less than two weeks after the Indian state of Uttar Pradesh passed a controversial conversion ban, authorities detained 10 men for compelling women to change their religion through marriage. The state legislation imposed a 10-year-sentence on anyone who uses marriage to force someone to change faiths. It was the nationalist party’s latest attempt to crack down on Hindu conversions to Islam. State police said families accused the Muslim men of abducting their daughters, Reuters reported. —O.O.