A defining moment for Title VII

The U.S. Supreme Court’s refusal last week to hear a case seeking to expand the definition of “sex” in federal employment law to include sexual orientation only delays the inevitable court battle in the war on words. Similar cases are making their way through the lower courts with mixed results, which will force the high court or Congress to step in eventually.

For decades, LGBT advocates have lobbied unsuccessfully to enact federal legislation barring workplace discrimination based on sexual orientation. What they have not attained by the protracted legislative process, they hope to get through federal agency edicts and judicial fiat, conservative court observers contend. Although sexual orientation is not a protected class under Title VII of the 1964 Civil Rights Act, homosexuals have sued their employers, claiming it is. And federal judges are lending credence to that argument.

It is the role of the court, not federal agencies, to determine “what the law is,” said Carl Esbeck, University of Missouri professor of law. To presume the 1964 Congress intended “sex” to mean sexual orientation misinterprets the statute, he said.

But federal judges are increasingly deferring to government agencies’ interpretation of their own policies, instead of deciding the constitutionality of the regulations themselves, noted Elizabeth Slattery, a legal fellow at the Heritage Foundation’s Institute for Constitutional Government.

The Obama administration gave tacit approval of federal agencies’ redefinition of “sex” to include “sexual orientation,” Esbeck told me. With the expanded interpretation, the EEOC began prosecuting violators.

With the EEOC’s blessing, Jameka K. Evans, a former security guard at Georgia Regional Hospital, sued in April 2015 claiming she was harassed and passed over for promotion by her employer because she is a lesbian. Evans filed the lawsuit herself.

Sloppy legal paperwork, not the merits of the lawsuit, most likely prompted the courts to refuse to hear Evans’ case, court-watchers said.

Gregory Nevins, an attorney for the pro-LGBT Lambda Legal, told the Los Angeles Times the Supreme Court’s refusal to hear Evans’ case is a “not yet” that merely delays the inevitable. The organization drafted Evans’ appeal to the high court where it garnered support from 76 businesses and other pro-LGBT advocates before getting denied a review.

Attorneys representing gay and lesbian clients in Indiana and New York have not made the same mistake as Evans. The 7th U.S. Circuit Court of Appeals effectively codified the EEOC sex discrimination policy in April when it ruled 8-3 for Kimberly Hively, who claimed she, like Evans, endured workplace discrimination because she is a lesbian. Indiana, Illinois, and Wisconsin are under the 7th Circuit’s jurisdiction and must adopt the newly expanded definition of sex.

Court-watchers expect the 2nd Circuit to rule soon in Zarda v. Altitude Express after hearing arguments in September. Daniel Zarda claimed he was fired for being gay. He died in 2014 but his estate continued the lawsuit.

The Zarda case illustrates the conflict within the government over who has the constitutional role of interpreting words in a policy: the Department of Justice and the EEOC argued against each other.

“Agency regulations have the force of law, and judges—not federal bureaucrats—have the duty to say what the law is,” Slattery said. “Judges should interpret regulations in the light of what their text says, not by the intentions of agency officials who created them.”

If LGBT advocates win the war of words, employers can expect more lawsuits, Esbeck said. Compliance exemptions based on religious convictions are very narrowly drafted and will provide little legal protection to employers who fail to conform.

But the Supreme Court does not have the final say on the matter, Esbeck said. Unlike the court’s ruling on gay marriage, which dealt with a constitutional matter of law, Title VII is a legislative statute and Congress has the final word. Even if the high court rules to expand the definition of “sex” in Title VII, Congress can—and currently has legislation pending—give meaning to the words that courts cannot redefine. 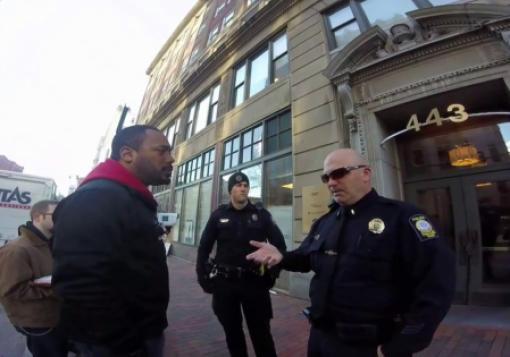 The noise of life

Pastor Andrew March knows it is the content, not the volume, of his speech outside a Portland, Maine, Planned Parenthood facility that has him at odds with the state’s noise ordinance. He is asking the U.S. Supreme Court for relief from the law Planned Parenthood is using to silence his pro-life message.

Planned Parenthood staffers did not complain Dec. 4, 2015, when climate change protesters paraded under the second-floor windows of their downtown Portland facility. But when March’s solitary, unamplified pro-life message drifted into their windows from the sidewalk below, they called the police to enforce the noise ordinance.

March, pastor of Cell 53 in Lewiston, Maine, sued the city and state claiming the law’s provision indicting a speaker’s “intent” is unconstitutional. The lawsuit also contends only pro-life speech is targeted for volume control on Portland’s Congress Street, the city’s primary thoroughfare.

A district judge agreed with March but the 1st U.S. Circuit Court of Appeals reversed that ruling Aug. 8. March filed an appeal with the Supreme Court in November. —B.P. 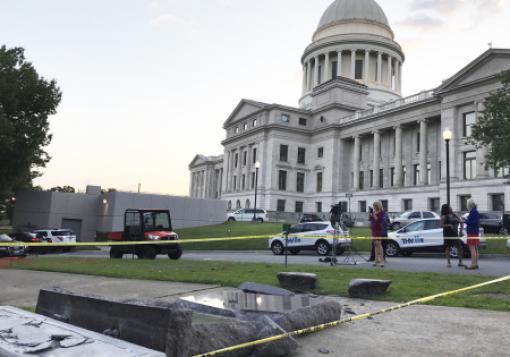 The second of Ten

As the Arkansas State Capitol grounds gets its second Ten Commandments monument this year, family members of the man accused of destroying the first are pleading with the court for mercy.

Michael Tate Reed, accused of destroying the privately funded display 24 hours after its installation in late June also faces accusations of destroying a similar monument on the Oklahoma State Capitol grounds in 2014. Arkansas authorities charged Reed with intentionally driving his car into the Arkansas marker and toppling it. Following a mental health exam and pleas for mercy from his family, Circuit Judge Chris Piazza ordered Reed committed to the State Hospital in November.

Reed’s family said the former Bible College student’s “strong faith in God would never allow him to destroy the Ten Commandments monument.” But Reed suffers from schizoaffective disorder and “goes down hill” when he doesn’t take his medication, they said in a letter to the judge.

Since Reed is being assessed for a mental illness that allegedly prompted his violent tendencies toward public displays of the Ten Commandments, the American Civil Liberties Union has stepped up to take his place, promising to file a lawsuit demanding the replacement monument’s removal. —B.P.

American street preacher Daniel Courney, convicted in September of using “threatening and discriminatory language” while preaching in Lincoln, England, has had all charges dropped, according to attorneys with the Christian Legal Center, a British pro-bono legal aid organization.

Courney, whose videos show him using a bullhorn or loud speakers to call people to repent, turn from idols, and believe in the one true God, had been preaching in the streets of the town 140 miles north of London when a crowd of hecklers formed. A Muslim woman told police he referred to her as “ISIS” and said “go back to your country.”

Prosecutors originally charged Courney with threatening behavior and disorderly conduct, but attorney Michael Phillips argued on appeal that “the law provides the freedom for him to preach the Christian message.” With the conviction overturned Dec. 7, Courney returned to the streets of Lincoln to preach the next day, according to his Facebook page. —B.P.