A core problem in earth science

If naturalistic theories are correct, Earth’s solid inner core shouldn’t exist, according to a new research paper in Earth and Planetary Science Letters.

Andrew Snelling, a geologist with Answers in Genesis, told me secular scientists struggle to find plausible theories for how Earth’s inner core formed because they base their assumptions on a naturalistic viewpoint that rules out the supernatural explanation the Bible gives for Earth’s origin.

Spontaneous crystallization of pure molten metal would require a massive drop in temperature. Under the conditions of Earth’s core, the iron would need to cool 1,000 Kelvins, or 1,800 degrees Fahrenheit, below its melting point.

“And that’s a lot of cooling, especially since at the moment, the scientific community thinks the Earth cools maybe about 100 degrees Kelvin per billion years,” researcher Steven Hauck told Live Science.

At that rate of cooling, Earth’s core could not have spontaneously solidified about a billion years ago without the involvement of some other factor. The researchers offered one possible theory: Perhaps a massive nugget of solid metal dropped from the Earth’s mantle into the liquid core and cooled the molten iron like an ice cube dropping into a glass of water. But, the scientists admitted, that explanation seems unlikely since it would require an absurdly large nugget, one with a 6-mile radius or about the size of a large city. Earth’s mantle doesn’t contain large enough metal deposits to make that feasible. A smaller nugget would lack the weight necessary to make it fall from the mantle, and even if it did it would disintegrate before it reached the core.

Genesis doesn’t provide all the details so we can only infer, Snelling said, but the Biblical account states water covered the Earth before dry land appeared. That means the rocks had to lift up from the waters, implying that somewhere between the initial creation and the emergence of land, God formed the internal constitution of the Earth.

“It makes sense that God would have formed Earth’s inner core right away because everything else necessary for life flows from that,” Snelling said. “The core is very important to the Earth’s magnetic field, which encompasses the planet and acts as a shield of protection.” 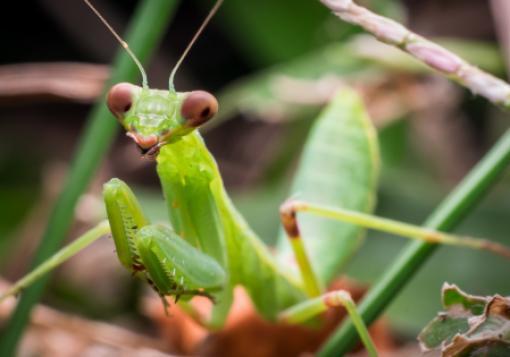 Humans and many animals, including monkeys, cats, horses, owls, and toads, perceive depth and 3-D structures based on visual information the brain receives from two eyes, a process called stereovision. The praying mantis is the only insect that possesses that type of visual system. Now researchers have discovered that God designed the praying mantis’ stereovision to work differently, and in some ways more efficiently, than that of humans.

In humans and animals with stereovision, each eye sees a slightly different view, and the brain combines the details to produce one image. Humans judge distance and depth by comparing the two images, but not so with these unique bugs.

Researchers outfitted praying mantises with special 3-D insect glasses and then entertained them with movies of tasty prey that appeared to hover right in front of them. The researchers discovered that, unlike other animals with stereovision, the mantis doesn’t bother about the details of the images or compare the two, but just looks for places where the picture is changing and showing movement.

This complex and highly efficient design of praying mantis vision could offer possibilities for machine vision, the researchers said in a YouTube video. The algorithms computers use to detect distance require a lot of computing power, but mantis vision could allow engineers to develop smaller, lightweight, more efficient computers that can process 3-D information. —J.B. 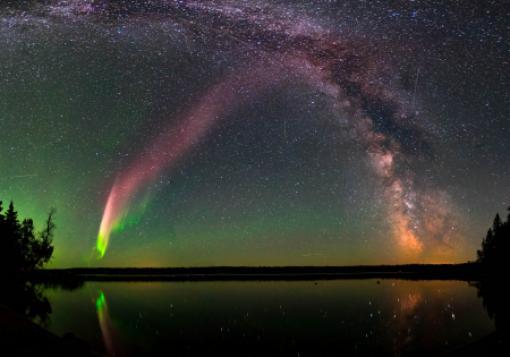 Live too far south for the northern lights? Look for STEVE

If you live too far south to enjoy the undulating waves of the aurora borealis, you may yet get treated to a recently documented light display named STEVE, short for Strong Thermal Emission Velocity Enhancement.

Citizen scientists in western Canada recently observed the ribbon of purple light streaking across the night sky. Like auroras, STEVE results from charged particles from the sun interacting with Earth’s magnetic field, but it travels along lower latitude field lines. Northern and southern light displays generally present in hues of greens, blues, and reds and last for hours, but STEVE appears as a purple line with a green picket fence–type structure that waves and disappears after 20 to 60 minutes.

“It’s exciting because this might be a kind of aurora that more people can see than any other kind because when it shows up, it shows up over more populated areas that are further to the south,” Elizabeth MacDonald, a NASA researcher, told Space.com. —J.B.

A recent stem cell transplant therapy may hold new hope for people suffering with multiple sclerosis, a disease in which the body’s immune responses attack the brain and spinal cord.

In the study, doctors used chemotherapy to wipe out the patient’s immune system and then rebooted it with a transplant of stem cells from the patient’s own blood and bone marrow. A year after the treatment, only one patient experienced relapse. At a three-year follow-up the stem cell treatment failed in only three out of 52 patients compared to 30 of 50 in a drug therapy group. Patients in the transplant group enjoyed reduced disability, but symptoms worsened for those who received drug therapy.

“The neurological community has been skeptical about this treatment, but these results will change that,” lead researcher Richard Burt told the BBC. —J.B.

Fascinating and insightful. Thank you for reporting!

“It makes sense that God would have formed Earth’s inner core right away because everything else necessary for life flows from that,” Snelling said. “The core is very important to the Earth’s magnetic field, which encompasses the planet and acts as a shield of protection.”

More specifically the magnetic field sustained by our iron core holds the charged particles in the belt around our planet known as the Van Allen field which repels the Suns plasma expulsions that would have otherwise ripped our atmosphere to shreds, making life as we know it, impossible on earth.

We are fearfully and wonderfully made!