WORLD Radio replay - A special birthday and a memorable trial 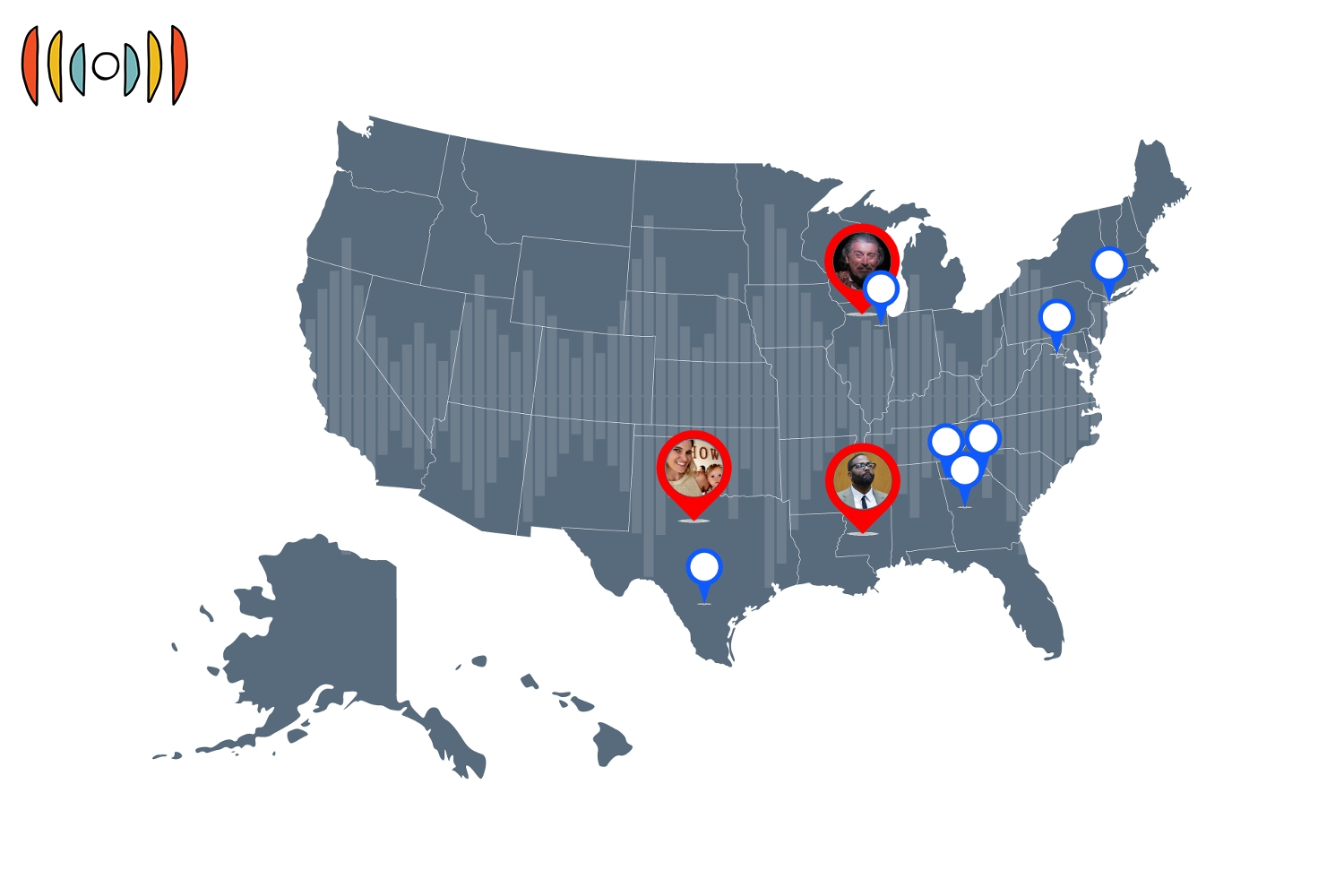 MYRNA BROWN, HOST: And I’m Myrna Brown. Coming up next on The World and Everything in It: our final three highlights from the past. Next week we return to our usual programming, but it’s been humbling to remember the many wonderful stories God brought our way. We hope you’ve been encouraged by them. I know I have. Today, C.S. Lewis on stage, the value of a human life, and a community grief observed.

BUTLER: Let’s begin by returning to 2012—not even a full year into the program—as then co-host Joseph Slife filed this story on Max McLean and his stage production of The Screwtape Letters.

JOSEPH SLIFE, REPORTER: The Screwtape Letters is often humorous – but it’s also chilling at times, such as when Screwtape and Toadpipe grow feverish with devilish delight over the idea of perverting what God has created for human happiness and turning into the means of human destruction.

MCLEAN: Never forget, that when we’re dealing with any pleasure, in it’s normal, satisfying form, we are on the enemy's own ground. But I know, we’ve won many a soul through pleasures. But it’s His invention, not ours. He made the pleasures. All our research thus far has not enabled us to produce one.

The Screwtape Letters succeeds as both entertainment and edification—a tribute to both Max McLean and the genius of C.S. Lewis’s book.

For Christians who happen to be in the audience, McLean hopes seeing Screwtape brought to life will prompt them to be more on their guard about what the Bible calls the “wiles of the devil.”

MCLEAN: We don’t spend a lot of time talking about Spiritual warfare, or the power of the evil one, and I think that our Chiristian life would be more...we would be more alert I would say to virtue, to grace, if we recognized that someone was really out to get us. It would bring us more to the cross. More to Christ.

MCLEAN FROM THE STAGE PLAY: Your affectionate uncle...Screwtape. [LAUGHTER].

BROWN: Our next story highlight celebrates an anniversary of a different sort. In 2017, WORLD correspondent Katie Gaultney introduced us to a family whose life had been unexpectedly enriched by a very special addition.

KATIE GAULTNEY, CORRESPONDENT: I’m at a birthday party for Palmer Anderson. It’s at a busy ice cream shop in north Dallas, and 1-year-old Palmer is the star attraction. A sprig of bright blonde hair sticks straight up off her head in a tiny ponytail. She has pale blue, almond-shaped eyes. They offer a hint that she is a member of a special club—a club that only 1 in every 700 babies in the U-S belongs to:

ANDERSON: Palmer has Down Syndrome. It’s a part of who she is. It’s no different than the fact that she has blonde hair…

That’s Katie Anderson. Palmer’s mom. She says when Palmer was born, the Down Syndrome diagnosis came as a surprise to her and her husband Dave.

Palmer is a lot like any 1-year-old. She scoots and crawls across the floor. Snacks on Cheerios. And mouths brightly colored toys. She wants to feed herself—and loves banging on her little red piano.

ANDERSON: Every time her daddy comes home from work, she just beelines to the front door with a huge smile on her face. She adores her big sister Beckett. She literally, her eyes just follow her everywhere she goes ...

In just 12 months, the baby who surprised Dave and Katie Anderson with her Down Syndrome diagnosis continues to surprise them. Katie says God has used Palmer to change her perspective about what “normal” means, and to grow her capacity to love others.

ANDERSON: I wouldn’t want it any other way. I wouldn’t change Palmer at all, not one single bit. I wouldn’t even take away her Down Syndrome if I could. That, in and of itself, has been a gift to me and our family.

BUTLER: And finally today, we wrap up with one of our most memorable stories from last year. Kim Henderson spent months digging into a horrific series of murders. In 2017, a lone gunman killed eight people in rural Lincoln County, Mississippi, over Memorial Day weekend. Kim met with the families and discovered how they handled incredible grief and how many of them found healing through forgiveness.

The morning jury selection began in the capital murder trial of Cory Godbolt, the sky thundered. Rain fell in sheets. It was like two-and-a-half years of tears bottled up, coming down all at once.

The families of Godbolt’s eight victims had waited a long time for justice.

NEWSCASTER: It apparently started as a family dispute and ended with 8 dead, including two boys and a deputy.

Daisy Moore attended the trial. She knew Cory Godbolt because he hung out at her grandmother’s house. But that was before he murdered her nephew.

MOORE: It's been an emotional roller coaster. This is a family member, this is someone we grew up with. But then on the other side of it, it's like, who is this person? Like, how could you do those things?

Reporter Therese Apel said the families of victims and witnesses like herself couldn’t wait to get the trial behind them.

Apel was the first to take the stand. Her video of Godbolt’s confession had become primary evidence. The Clarion-Ledger even sent a lawyer down to protect her source from being named, the one that called her during the night.

Jurors studied the footage of Godbolt and Apel as it played on a screen at the front of the courtroom. Audio here is courtesy of Apel and The Clarion-Ledger.

GODBOLT: My intentions was to have y’all to kill me. But I ran out of bullets. (APEL: It’s a good thing they showed mercy.) Suicide by cop was my intention. I ain’t fit to live, not after what I done.

Godbolt watched the video, too, surrounded by a trio of defense attorneys. Instead of prison orange, he got to wear a coat and tie to court each day, as well as a distinguished pair of wide-framed glasses. Shayla Edwards found it difficult to be near him.

EDWARDS: When you see sitting in front of you, the man that killed your children. It's kind of hard . . .

Myrtis May has health problems, but she made it to the trial anyway. Myrtis May’s daughter, Sheila Burage, was one of the shooting victims.

During a recess at the trial, May described what it was like to watch her granddaughter weep in the witness stand.

MAY: I hate to see them in pain, because when this first happened, I was no help to them at all. I mean, they could come cry on my shoulder, and all I could do was cry back.

But May said she can now give her grandchildren a sense of direction. Six months after the tragedy, she did a deep dive into Scripture. God became her comfort.

MAY: Knowing who He is and how He died for sinners like us—you can't help but love a God like that. I learned to depend on Him more and more each day. Lean not to your own understanding, but all thy ways acknowledge him, and he will direct your path . . . It has helped me a whole lot, and I'm praying that it will help my family as well.

May has grieved before, but she says this time has been different.

MAY: It's a hurt that, that only God can bring you back from.

MAY: I feel like he's already done that for me.

BROWN: If you’d like to hear any of the complete versions of these features, we’ve included links to them in today’s transcript: wng.org.

BUTLER: We could only feature 12 stories this week, meaning there were so many good ones we didn’t have time to highlight. But on behalf of all the editors at WORLD, I want to express our deepest appreciation to our many reporters and correspondents over the years who have invested so much time and energy into our mission of Biblically objective journalism. Thank you.