In this photo released by Xinhua News Agency, Chinese President Xi Jinping waves as he chairs the ASEAN-China Special Summit to commemorate the 30th Anniversary of ASEAN-China Dialogue Relations via video link from Beijing, China on Monday, Nov. 22, 2021. Huang Jingwen/Xinhua via Associated Press 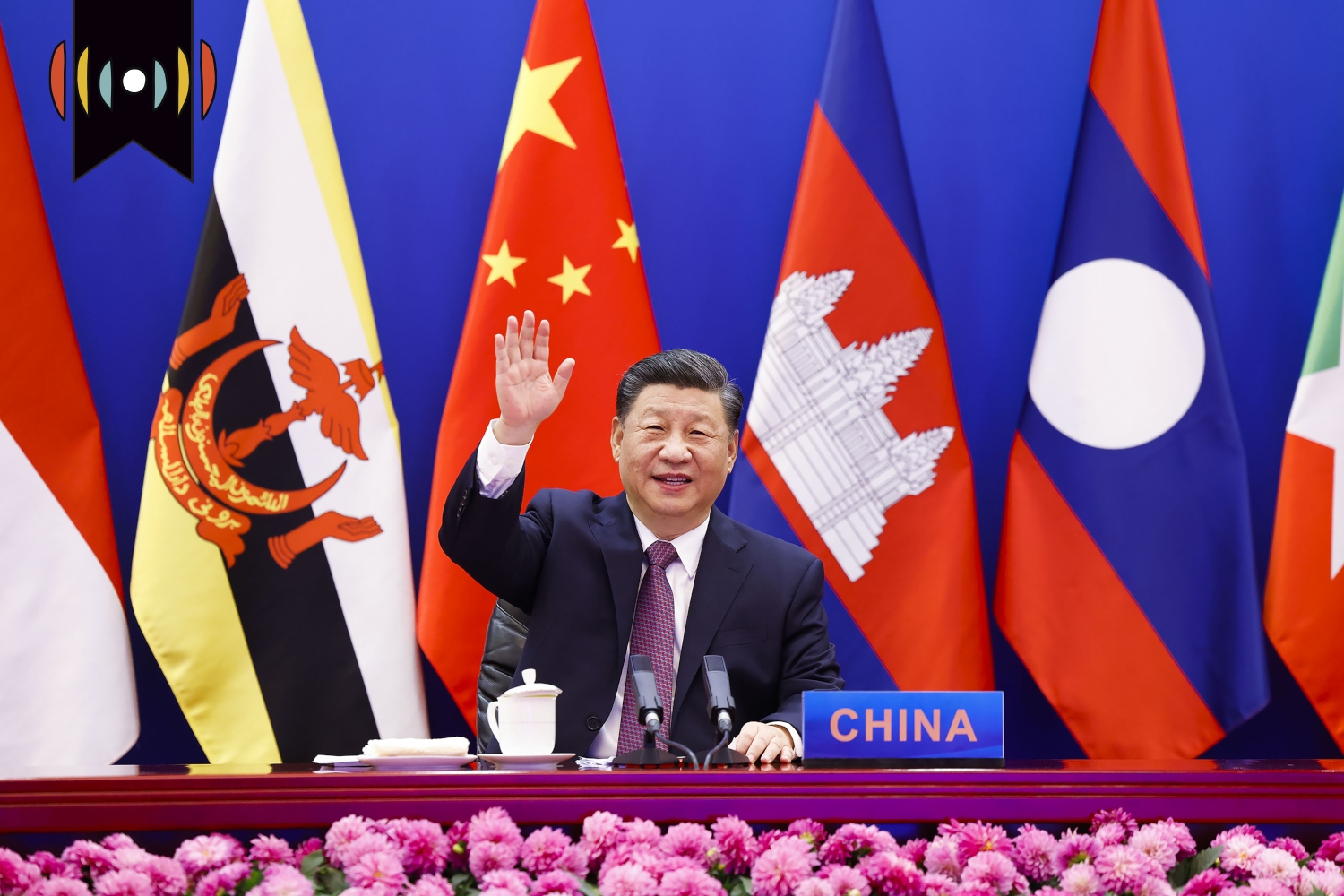 A quick word as we head into the Thanksgiving holiday, quick word on our November New Giving Drive.

I expect you’ve heard about the dollar-for-dollar match up to $40,000 for all new gifts this month. We’re not there yet—little better than halfway to that goal.

So some longtime friends of ours from Pennsylvania got in touch and said they wanted to incentivize it further.

If you’ve never given before and you can help us reach that $40,000 goal by making a first-time gift this month, our friends will chip in an additional $10,000.

So that’ll really multiply your giving if you’d become a first-time donor with us this.

President Biden and Chinese leader Xi Jinping met last week for a virtual summit. The meeting did not result in any new agreements or policy shifts and the White House says it was never intended to. But President Biden said he did hope to establish—quote—“guardrails” against conflict between the two countries.

EICHER: There is no shortage of disagreements between the rival superpowers.

And Beijing has in no way disguised the fact that it intends to outcompete and overtake America in the years ahead.

China already has the world’s second-largest economy, behind the United States, and it is ramping up its military capabilities at a dizzying pace.

So how is the United States countering the threat from China and how should it counter Beijing?

BUTLER: Here to help answer those questions is Zack Cooper. He has served as an adviser to the Defense Department. He’s now a lecturer at Princeton University as well as a senior fellow at the American Enterprise Institute. Good morning and thanks for joining us.

ZACK COOPER, GUEST: Wonderful to be here with you.

BUTLER: Let’s start with last week’s virtual summit between President Biden and Xi Jinping. What do you think the meeting accomplished?

COOPER: I think the best thing the summit accomplished is a new tone in the relationship. So if you go back to the past several months, there had been a series of pretty tense meetings between American and Chinese leaders that started in Anchorage, Alaska, and then went on to Tianjin in China. And in each of those meetings, both sides had made very pointed comments, in the meetings, after the meetings, and really were critiquing the other side quite strenuously. The tone now is somewhat better in the relationship. Xi and Biden both spoke somewhat positively, at least of each other. And my understanding is that there were still a fair number of tensions in the closed door session, but at least this wasn't fireworks in front of the press. So that's probably the most positive thing that one can say about the summit that just happened.

BUTLER: So, why do you think tone is important?

COOPER: Well, that's a good question. I'm not sure it is that important, in fact. The hope from the White House is that an improved tone will lead the Chinese officials to be able to be somewhat more cooperative. So there's a feeling that Xi Jinping has been very confrontational in his discussions about the United States over the last few years, and that that may have made other officials in China, more junior officials, feel that they also had to be somewhat confrontational. And so the hope is that if the tone is better now that perhaps the results will be better, as well. But I'll tell you, my expectation is that this meeting will not have solved any of the core structural problems in the relationship. And, therefore, although the change in tone is, uh, positive, it doesn't signify any fundamental alteration in the direction of the relationship, which I think it's still trending in a very bad direction.

BUTLER: When it comes to competing with China economically, there is a lot of talk in Washington about selective decoupling from China. And I’ll ask you about re-coupling in just a moment, but let’s start with selective decoupling. What is that and why do many in America feel that that’s the right prescription?

COOPER: Well, the core idea is that the United States has been very closely coupled economically with China for decades, and we have gotten relatively cheap goods from China. In exchange, we have sent money, which has helped to feed the Chinese economy. And in many ways, China has been a production hub and the rest has been able to focus more on other areas, whether that's farming or high technology where China doesn't have an advantage. But over the last couple of decades, it's clear that this has altered some aspects of the U.S. economy in some ways that are fairly negative. And so some people have argued that the U.S. should decouple to some degree from the Chinese economy. In other words, that the U.S. should be more self-reliant in certain areas, things like microchips, or personal protective equipment or pharmaceutical ingredients. And that doing so would better protect Americans, especially if those supply chains for those kinds of critical goods are strained, as they are right now. And so the idea was, well, maybe we should decouple a bit from China and that would give the U.S. more security at home and, in fact, maybe it would bring a bit of business back to the United States, even if it increased prices somewhat. And so the idea isn't to completely decouple the two economies. I think that's unrealistic, and it would be unwise. But the idea is instead to just decouple selectively in certain areas where we think we need to have a bit more independence from Beijing.

BUTLER: Now, that sounds reasonable to me, but you seem to hedge a bit on that argument.

COOPER: Well, I actually think that selective decoupling is probably not a bad idea, as long as it's done pretty carefully. But the one thing that it does, which is potentially quite risky, is that if we decouple in too many areas too quickly, we could find that, in fact, Beijing is not very dependent on the United States anymore. And although we don't talk about this a lot, it's actually pretty good for the United States for China to be dependent on us in certain areas. And the reason is because it gives us leverage. And oh, by the way, the Chinese know this. They have a plan called dual circulation policy. And part of the idea is to keep selling goods to the world, while China tries to stimulate more domestic growth. And what that means is that China wants to have leverage over some other countries by being a main exporter to them. And so it's still helpful for the United States to have China be dependent on the United States in certain areas, even as we're decoupling. And so really, my argument would be, we should be thinking carefully about how to re-couple in certain strategic areas that give us leverage over China. Not that we would use today but that we could use tomorrow if we need to.

BUTLER: You’ve mentioned how this recent meeting marks a shift in tone for the US in regards to China. Before that, had there been much of a difference between the actual policies between the Biden administration and the Trump administration?

COOPER: A lot of them have been quite similar. And this surprised a lot of people. I think many observers expected that the Biden team would take a much more cooperative approach from day one. And in fact, in some areas, the Biden team was perhaps even tougher than the Trump team. And that that really did come as a surprise to many observers in Washington. But I'll tell you, in talks with leaders and officials in Beijing, I think Chinese officials were even more surprised. They really thought there was going to be a positive change in the relationship under Biden.

However, over the last two or three months, I do think we've seen an improvement in the bilateral relationship. And some of this is because John Kerry has been pushing for climate change cooperation and I think there are others in the administration pushing for advances on trade issues. And they have been able to affect some of the dynamics within the administration on China policy and try and turn it in a more cooperative direction. And I don't want to suggest that I think that's necessarily a good thing. I think it's a risk for the United States to give up some leverage on other issues to try and force China to come to the table on climate change. But I do think that's the dynamic we're seeing now is China's leveraging climate change as a way to, to limit pressure from the United States in other areas.

BUTLER: You also say that Washington should start working more closely with its allies and, together, make China more dependent on certain foreign products. How would that’ll work and what kind of foreign products are you talking about?

COOPER: I'll give you one good example, which is a lot of Chinese cell phones used to use the Android operating system that Google makes. And that actually gave the United States a tremendous amount of leverage, not only over those cell phone makers, but also over certain apps that were on those phones and on down the line. And that kind of leverage is quite lasting, right? If overnight, the United States could legally force Google to stop updating the operating systems from a large portion of phones in China, that's a pretty substantial coercive mechanism. And we're not going to want to use it frequently, but it's the kind of thing that you could imagine might change some Chinese behavior. And there has been a push, for example, to wall off that kind of area so to say, “No, the United States shouldn't allow phones in China to operate using the Android operating system or other similar technology that's U.S. based.” And I think part of what I'm arguing here is, I think actually having that leverage over the long term is something that would be more useful to the United States than trying to slow down makers of phones in China and force them to build their own Android systems over the next few years. So that's the kind of example of an area where perhaps some degree of recoupling wouldn't be a bad thing.

BUTLER: Zack Cooper is a senior fellow at the American Enterprise Institute. Thanks so much for joining us today!

COOPER: Thanks for having me.