Rep. Hakeem Jeffries, D-N.Y., joined by Rep. Pete Aguilar, D-Calif., left, and Rep. Katherine Clark, D-Mass., speaks to reporters just after they were elected by House Democrats to form the new leadership when Speaker of the House Nancy Pelosi, D-Calif., steps aside in the new Congress under the Republican majority, at the Capitol in Washington, Wednesday, Nov. 30, 2022 Associated Press Photo/J. Scott Applewhite 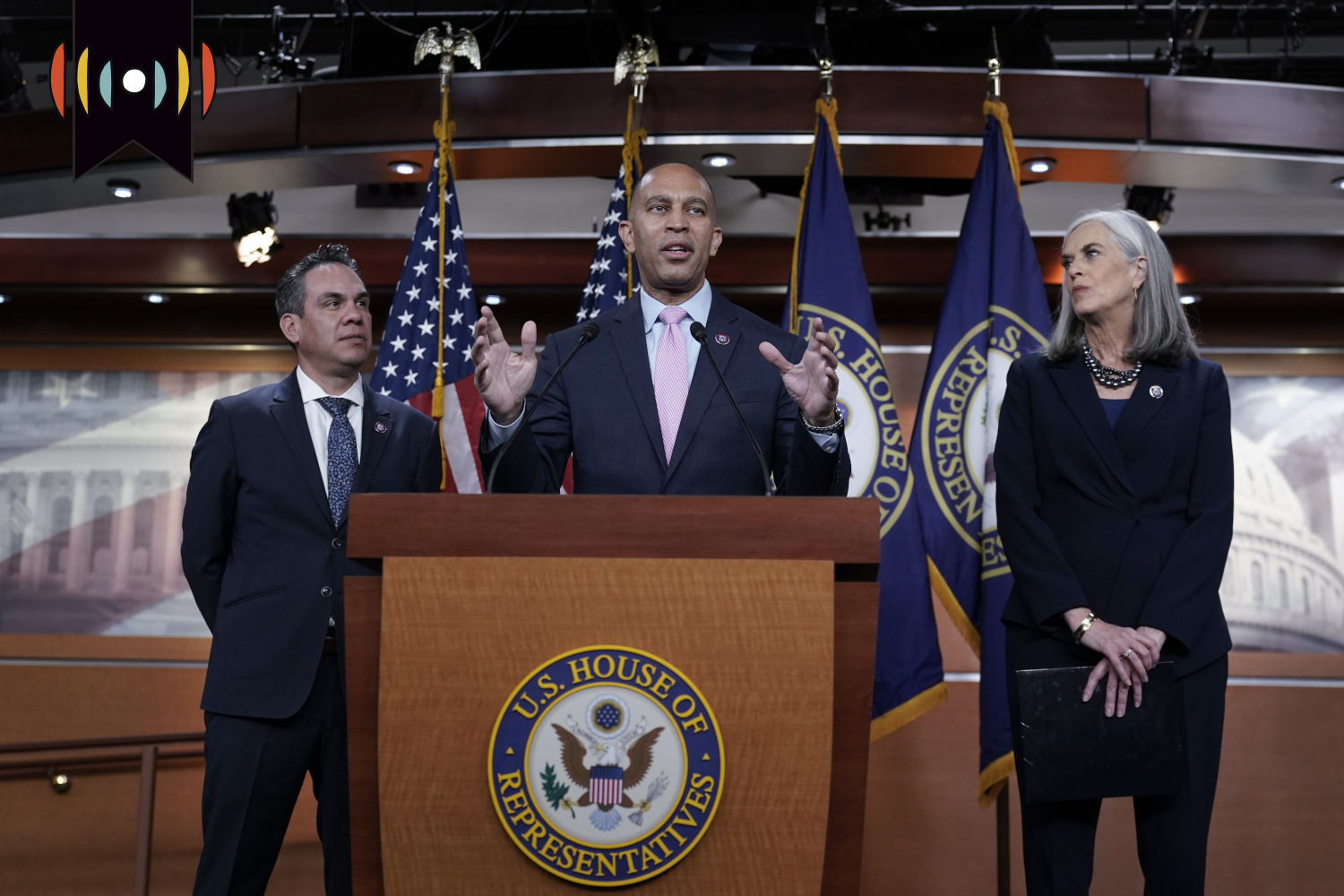 Railway strike » The House voted today to block a railway strike after President Biden called on Congress to intervene in the deadlocked labor negotiations.

PELOSI: Again, I don't like going against the ability of the unions to strike, but weighing the equities, we must avoid a strike. Jobs will be lost, even union jobs will be lost.

The Senate and the president have until December 9 to approve the legislation binding railway workers to their jobs.

SCHUMER: And Leader McConnell and I agreed, we'd try to get it done ASAP.

Schumer added that Congress needs to act sooner than the deadline. If not, railroads might refuse to put perishable goods onto trains for fear they won’t reach their destinations in time.

Eight unions have already approved an agreement for better pay and bonuses, but four others rejected offers.

JOSH SCHUMACHER, REPORTER: A Treasury Department spokesperson said the agency has complied with a court order to make the documents available to Congress.

The House Ways and Means Committee requested six years’ worth of Trump’s tax returns—ostensibly for the purposes of oversight.

Trump fought the request in court, saying the committee was playing politics with his private information. The Supreme Court recently ruled that the IRS could hand over the returns.

House Dems » JEFFRIES: Good afternoon, everyone. It's an honor to stand before you today as the incoming House Democratic Leader for the 118th. Congress that will convene on January 3.

That’s Congressman Hakeem Jeffries. He will succeed Nancy Pelosi when the new Congress convenes in January.

But he won’t be the speaker of the House. Republicans will have the majority and nominate someone else for the role.

Still, Jeffries promises to do what he can to advance legislative priorities.

Meanwhile, the Republicans’ lead in the House is narrow enough that GOP leader Kevin McCarthy will need almost all of his party’s votes to win confirmation as speaker.

Jiang led the ruling Communist Party for 13 years until 2003. He helped push the country out of isolation by entering China into the World Trade Organization.

Here Jiang is saying that he hopes entering the World Trade Organization would bring vitality to the Chinese economy.

Kerry Brown is professor of Chinese studies at Kings College in London,

BROWN: He wasn't the kind of typical autocrat. I mean, he kind of would do impromptu things like belting out songs at karaoke, you know, international meetings and things like that.

Chinese media reported that Jiang died of leukemia and multiple organ failure in Shanghai. He is survived by his wife and two sons.

Fed » Stocks pushed higher yesterday on news of a looming interest rate hike. For investors, the good news is that the next rate increase will not be as steep as prior ones.

POWELL: After our November meeting, we noted that we anticipated that ongoing rate increases will be appropriate in order to attain a policy stance that is sufficiently restrictive to move inflation down to 2% over time.

Powell noted recent, positive signs that inflation is slowing down, but said more work is needed to get soaring prices under control.

POWELL: It is far too early to declare goods inflation vanquished, but if current trends continue, goods prices should begin to exert downward pressure on overall inflation in coming months.

The Fed is expected raise interest rates by half a point at its meeting on December 13th and 14th.

Oath Keepers » The Justice Department has charged more than 700 people in its investigation into the January 6th U.S. Capitol riot. Most of them have yet to be tried.

On Tuesday, the court convicted Oath Keepers founder Stewart Rhodes of seditious conspiracy. The last federal conviction on that charge was in 1995.

BRIGHT: I think there would have been a greater change in tenor and tone regarding the future prosecutions had there been not guilties on the sedition cases across the board.

The trial lasted for nearly two months, and the jury deliberated for three days.